Recently it was Innova Crysta from Toyota and now Mitsubishi has taken the privilege to launch 'Outlander Chrome'. This limited edition variant is an effort to push the sales of this SUV. While this move may not directly help the car to set sales chart on fire but sure will offer it much needed media limelight which Outlander has been missing from sometime. Following are few of the features of Mitsubishi Outlander Chrome:


Will you consider buying one? 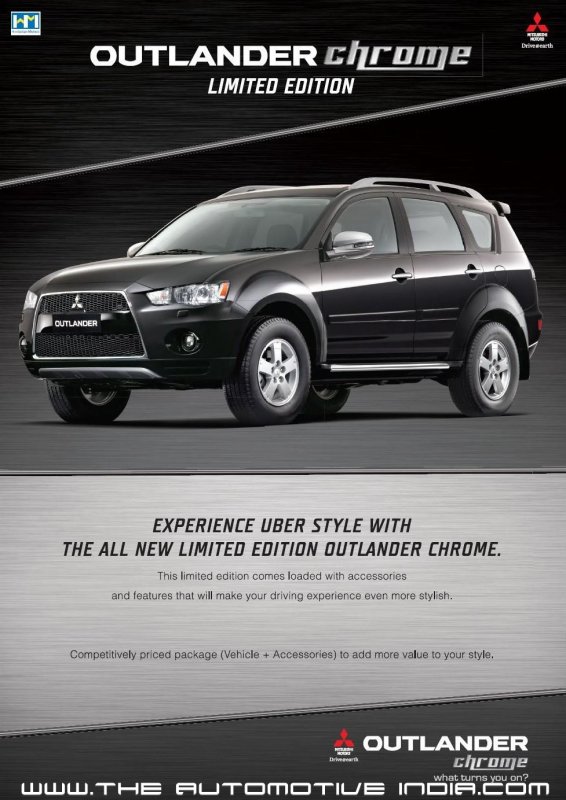 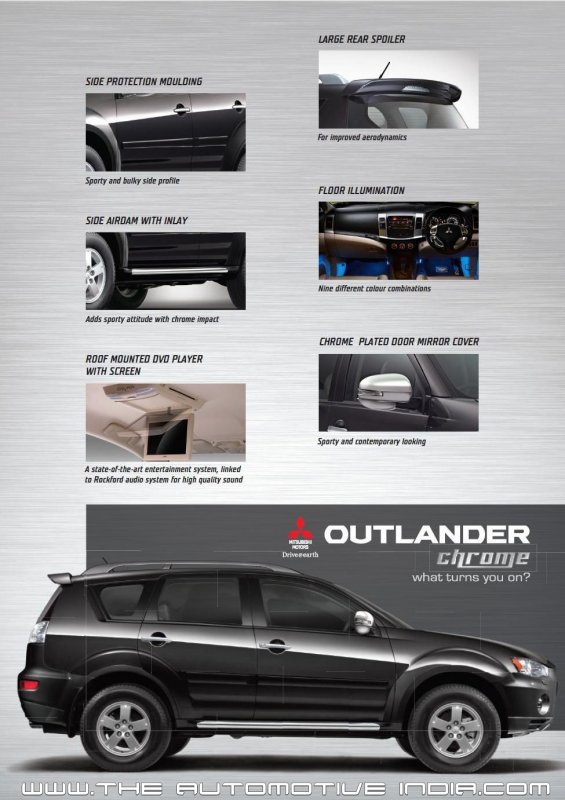 I liked the floor illumination.
Chrome finishes are best for black cars,I think.

Roof mounted DVD player looks very cheap. Instead a rood mounted LCD display coupled with the in-dash player would be a perfect choice.
2

In my opinion, stickers/decals and cheap silver painted plastic parts sold off as chrome make a car look cheap and one similar to those highway trucks with "OK TATA GOOD BYE, FIR MILUNGI" stuff written at the rear of it along with some cheap stickers etc. Just my opinion, no offences meant to anyone here.
DVD player is nice to have, but people seldom use it. In-floor illumination looks cheesy, might allure some.

In case of Outlander, it is very much a winner. But the fact that HM's attitude towards the market is a big disappointment. We seldom see ads being aired or in print. Some say, it's petrol driven and that's why it doesn't see much sales, but so is Honda CRV and Suzuki GV. Outlander and other Mitsubishi vehicels are let down by Mitsu-HM servies and after sales only. On other front, customers are always satisfied with Mitsubishi vehicles.Chrome or no chrome, Outlander deserves good sales.

Chrome or no chrome, Outlander deserves good sales.
Click to expand...
Well said, This is just marketing stuff to keep the car in focus.

I hate that rear spoiler , floor illumination is good , all other additions are nice to have!


The only reason i never considered Outlander for my purchase was it is Petrol.


@ 2teja Agree CR-V and Vitara are also petrolheads but CR-V has the premium image and Vitara has the huge Maruti's A.S.S behind and also lets not forget the Japanese reliability these cars come with. I am not meaning to say Outlander is unreliable and cheap but still there are enough reasons for buyers in this segment to overlook Outlander.
2

cooldhaya said:
@ 2teja Agree CR-V and Vitara are also petrolheads but CR-V has the premium image and Vitara has the huge Maruti's A.S.S behind and also lets not forget the Japanese reliability these cars come with. I am not meaning to say Outlander is unreliable and cheap but still there are enough reasons for buyers in this segment to overlook Outlander.
Click to expand...
Just sharing my experience, Outie is really an understated vehicle and many would not even be aware of one such vehicle available in India.

@Cooldhaya, I don't know if you have taken a ride in Outie or not, but one ride in it sure blew me over. Those cushion seats with nice to touch/feel upholstery all around, an AWESOME ICE by RF, on the fly 4x4, negligible body roll (although over crater sized potholes, it behaves like my Scorpio, albeit a drunken elephant), and that 6 speed AT tranny sure gives more premium image than CRV in my opinion. As long as reliability (Read: Japanese) goes, Mitsus and Hondas are at par. A.S.S of Mitsu is a concern but Outie is sure a better vehicle than the CRV.

In my case, with the kind of running I have, mostly in city and 1000 Kms a month, Outie is a good deal considering it gives around a little more than 6 to a litre in choc-a-bloc traffic with A/C on all the time and being AT. Need to have that kind moolah to buy one though

Went on a short trip to a village near Alwar, round trip around 550 Kms in an Outie, it gave a fuel average of little less than 10, that includes highway and village travel. I was satisified with it's performance and would definitely reccomand it to anyone in the market who wants to buy cross over, or even an SUV sans the beastly looks (read: Endevour, Scorpio, Fortuner, Safari and the likes). Outie is one beauty and one really needs to spend some time having a look at it, its fit and finish is awesome and the headlights are a killer to look at during night time.

Hmm yes i have not driven or gone for a ride in the Outlander , maybe one drive will change my mind! And by no way i supported CR-V , its highly over-priced IMHO!


But still as i said before one reason why i din't even bother checking out the Outlander was it was Petrol. We needed a diesel SUV for our running.
2

Right said, CRV i think is available at around Rs. 25 Lacs, and Outie in Delhi costed Rs. 22.65 OTR with a refrigerator, 3M sun films, under body anti rust coating, car cover thrown in. That really makes it a better deal than that overpriced CRV.

Hi, any info how much extra to shell out for this edition ?