BMW Mini has released the first official pictures of the new Coupe Concept on the eve of the fiftieth anniversary of the brand.

The new Coupe Concept to be unveiled at the upcoming Frankfurt Motor Show is unlike the original Coupe of the sixties which simply had a fastback replacement for the standard roof. The front styling is almost similar to that of the Mini Cooper but the windscreen is raked or swept back and not upright.

The side profile is unlike anything seen before. The roof is aluminium and the greenhouse has a unique wraparound design. The rear seats have been dumped in favour of 250 liters of luggage space making it a wee bit more practical. Other sports coupe design elements include massive wheels, sporty looking front and rear bumper and dual centrally placed exhaust pipes.

The interiors come with leather upholstery, carbon fiber trim and two Chronoswiss clocks of which one is the usual clock while the other one is dedicated lap timer.

Propulsion duties are handled by a 1.6 Litre turbocharged 4 cylinder petrol engine with 211 bhp of maximum power and 260 nm of torque. The coupe concept also features an overboost function which can deliver a maximum of 280 nm of torque giving swifter acceleration. The Coupe Concept is expected to sprint from 0-100 kph in approximately 6 seconds.
The new Coupe Concept will be unveiled for the public at the Frankfurt Motor Show. 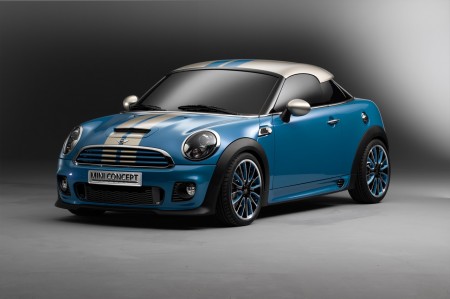 This is just rocking design from BMW again!

No compromise on any aspect :-)

awesome!
this looks killer man, any idea of its price?

Hey guys just have a look at this link.


Looks awesome, each & every snap of the car is in the gallery wth videos!!

This MINI is definitely a looker.
I didn't liked the other MINIs much but this is the one to look at.
We can call it a "MINI" Sports car actually. Lol.

wow finally mini got its sportier and killing looks which many were awaiting to see on this piece.STUNNING.

vroom said:
Now why do I feel the Coupe looks so similar to the Swift

or vice-versa?
Click to expand...
May be because of the front area which I've highlighted in the pics below. Also, Their A-Pillars are quite same.

The design of Swift is inspired by Mini.

The car looks awesome.It would look hot in red color.

And yes the swift design is inspired from mini.

I cant say its derived from Mini!

Swift is actually practical mini for India
You must log in or register to reply here.