Met an Accident (Brake Failure) Due to Service Center’s Fault. Now What?

Note:Please,no one must tell me to act calmly.

Have a look at the mess happened even after I tried very hard to save it:-
This made my heart bleed...the car got hurt!!! - YouTube

How this happened?
Yesterday my friend took the car to Manesar(Gurgaon) and at about 3 pm while returning he told me that he heard some screeching noise from brakes and hence I booked a service and told him to leave the car at service center at 4 pm.
So he left it there and Toyota guys got the car repaired.

Now at 8:00 pm the car reached home and at 10:30 pm I left for Jaipur in the same car.Soon I was driving on my empty city roads.
When I was about to climb on the NH-58,the car was doing about 40 kph suddenly a three wheeler moving in front changed its lane and hence I applied the brakes and whoaa

,no brakes...simply no brakes.And hence as a result my car tailgated the three wheeler from rear and the fender and RVM and door of the front left side got broken.
Actually when I did PDI of the car at home then I complained about brakes being very weak but the SA told me on phone that no issue it will become okay withing 5-10 kms,but what happened in 5-10 kilometers was just opposite to that.

Now my question is what to do?Or say how to deal with this matter?I don't want to make it a big issue and hence want the dealership level solution itself,but then it was a compromise on safety and this is unbearable for me.
What would have happened if the same would have took place at 150 kph?

Have a look at my poor car...my heart is bleeding.. 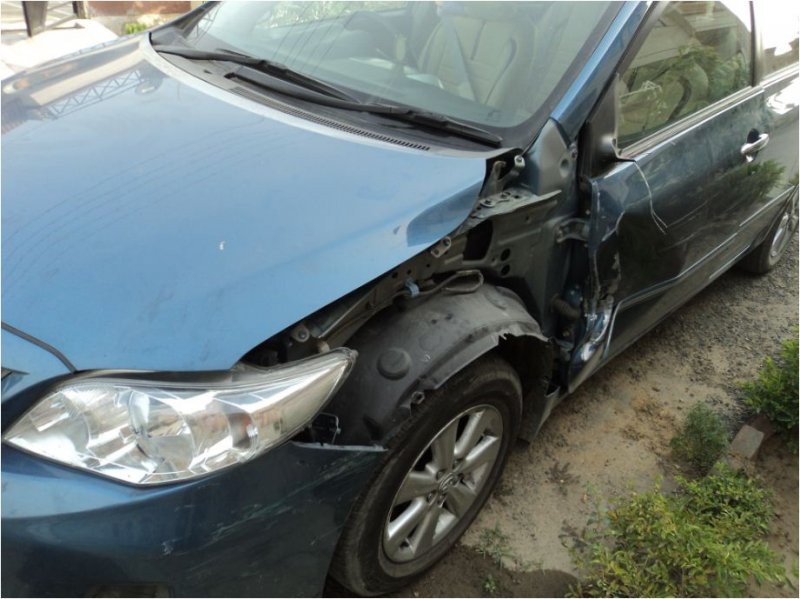 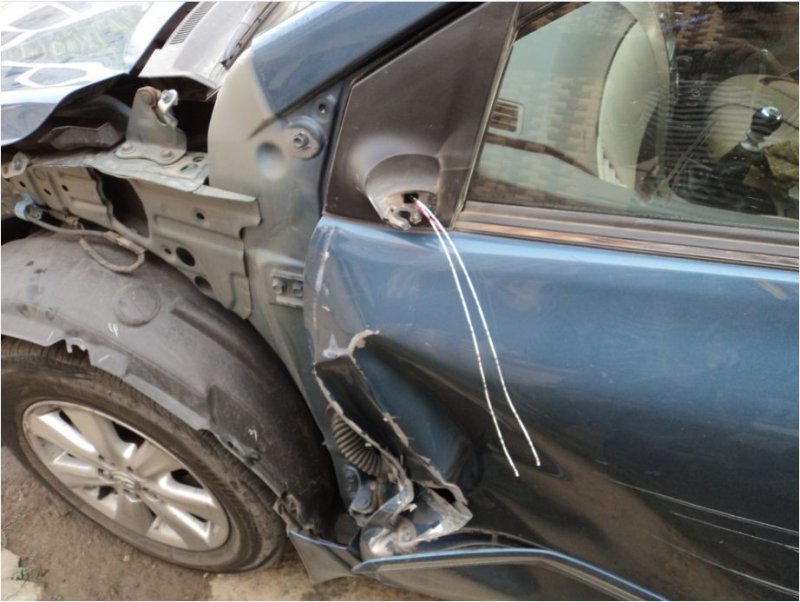 Do take up this matter seriously,ask for the dealer to replace the car, after such incident's you will never have the same confidence with this car, your life was at stake thanks to the incompetency of the service centre or a sub standard part's used in the car, in both the cases you have all the right's to demand a refund or a brand new car.

OMG!! Heavy damage! Are you ok?!
+1 to visran.
These would be the steps If I was in your place-
1. Go straight to Showroom.
2. Bang the HEAD of the SE on his table and pour all his Chai on him!

3. Report him the problem and ask him to replace the car as it is lemon from Day 1. (Dont take it seriously)
4. If he argues, Ask him to Replace all the brakes.

Actually, At what speed were you travelling at the time of accident? 40? From, The damage, it seems that the car was at higher speed (say, 60) or the Auto-wala was braking. The door, fender, ORVM and front bumper have got damaged. I think they would make a bigger dent on your pocket.

I cant see the video here but the damage looks pretty bad
are you okay bud?

Damn that car , but if your doing alright then thanks to the car ,saved your life.

get the car checked. Hopefully chassis wasn't damage , if they were the car is a Write off.

Front what I see its :
front Bumper
Side panel
Seals (between panel and mud gaurd)
Door (including the Rear view mirrors)
Bonnet

check if the front shocks are okay , does it makes any knock sound ? if yes need to replaces bushes and stuff

@Codename - No. The bonnet looks alright. It isn't damaged.

Never expected this from Toyota. No brakes at 40kmph?

This is quite shocking. Thank God that you weren't speeding much and the damage is only to the car.

Please take it up seriously. Brake failure is not a take it easy issue.

TSIVipul said:
Now my question is what to do?Or say how to deal with this matter?I don't want to make it a big issue and hence want the dealership level solution itself,but then it was a compromise on safety and this is unbearable for me. What would have happened if the same would have took place at 150 kph?
Click to expand...
I’m shocked to read that. Hope no one was injured? This is nothing but a serious blunder on part of the service center. Just a few days ago the same happened with me too when my car’s brakes didn’t work soon after getting the car back from servicing. Did you figure out the cause of brake failure? Do immediately contact a senior in charge of the service center. Go back to them and give a piece of mind. I didn’t mind doing that because it was after all a matter of someone’s life. Just insist for a full compensation in terms of total refund as well as repairing these damages on the car free of cost.

I hope no one is injured in this mishap !

Did you not use break just for once before going to this NH 58 ? How come a poor three wheelar body create such a mess ? 40kmph is your assumption or actual ?

You are right it could have been a disastrous if you were travelling at higher speed. Go to the showroom / service centre. Create a big scene to make your case more strong. Ask for the free of cost work and full compensation as Vibhor has suggest.
J

Have a look at my poor car...my heart is bleeding..
Click to expand...
Sad to see that,Hope everything would be in your favor and car will be fixed back to normal very soon.

This is very painful mate.

If I were you, I would go the the service center with the paperwork of the service that you carried out before the accident, demand to talk to the MD, blast the **** out out of him and ask him for some major compensation. I would sue them if required, or at least threaten to do so.
Last edited by a moderator: Jun 4, 2012

First of all i hope no one is injured, by seeing that video and pics i feel very bad.
Such a nice car is been turned into a crap, the service guys how the hell they can play with our lives.
This is a serious issue wondering how you can resolve this, i hate fighting with those guys.

Actually when I did PDI of the car at home then I complained about brakes being very weak but the SA told me on phone that no issue it will become okay withing 5-10 kms,but what happened in 5-10 kilometers was just opposite to that.
Click to expand...
As the SA confirmed from his side , then it is the service station peoples fault.
Fix the damage in insurance claim , but ask them to to pay claim bill.

Really sad to see the Pics of Your car..

Hope everything will be fine soon, Service centre guys are fully responsible for this.. As like all said. Make it as a big issue. Here after they should not do this kind of work to any cars in future..

O.T. :- How you took your car to your home without Breaks?

OT: @Appu, He might have done so by opening the door and putting his foot down hard on the road for stopping/slowing down the car!

Vipul, hope that you're ok. That's a painful sight. But from the pics I don't see any permanent damage to the car. Nothing serious. The fender, front door etc will have to replaced. You should take up this issue seriously. I'm sure they will replace the parts free of cost. Don't forget to tell them to check the suspension.

I'm sure your car will be back to the original state soon. I'm not telling you to stay calm but there's nothing much to worry man (going by the pics).