Note: Head on to this link for official review of Maruti Suzuki Alto K10 2015: http://www.theautomotiveindia.com/f...alto-k10-2015-review-test-drive-pictures.html. 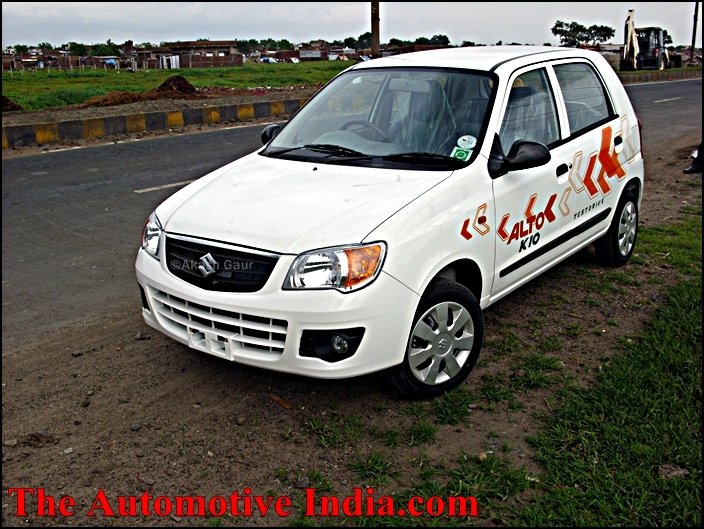 Maruti Suzuki Alto came to India way back in 2001 with a call of “The Hottest Little Car in Town.” It was initially offered with a couple of engine options, a small 800cc and the bigger 1.1 Liter. After sometime, soon in year 2005, Alto received a face lift which included minor facial changes such as new grille, refreshed bumpers, clear lens headlamps, and tail lamps. As for interiors, the only noticeable change was that sliding Air conditioner controls were replaced by modern rotary control. However, this was not just a face lift; it was rather a move by Maruti Suzuki to consolidate the sales of aging 800 and Alto, precisely which is why we had to sacrifice the powerful 1.1 Liter engine option (On top-end VXi).

Earlier this year, Alto’s 800cc heart went under an upgrade to meet the stricter Euro-4 emission norms in India. The exteriors were more or less the same with an exception of decals replaced by badges. On the interiors, Instrument cluster supports digital display for fuel gauge; odometer and front seat headrests are fixed. Although, Ever since its launch in India, Maruti Alto has been doing exceptionally good and has also proved to be a better and fresh alternative to decades old Maruti 800, but the sales figures suddenly noticed even a higher surge after competitively revised pricing in 2005 when 1.1 Liter engine was phased out. It’s a no wonder why this is currently the highest selling car in India with around 20,000 units joining the road traffic of our country each month.

Now, in a bid to attract young and “budget” enthusiasts, Maruti Suzuki has just launched all new model called Alto-K10 with an efficient and proven K-Series engine but it will be sold along side the already upgraded BS-4 version with a marginal price difference and the changes are not only limited under the hood, Let’s find out more. 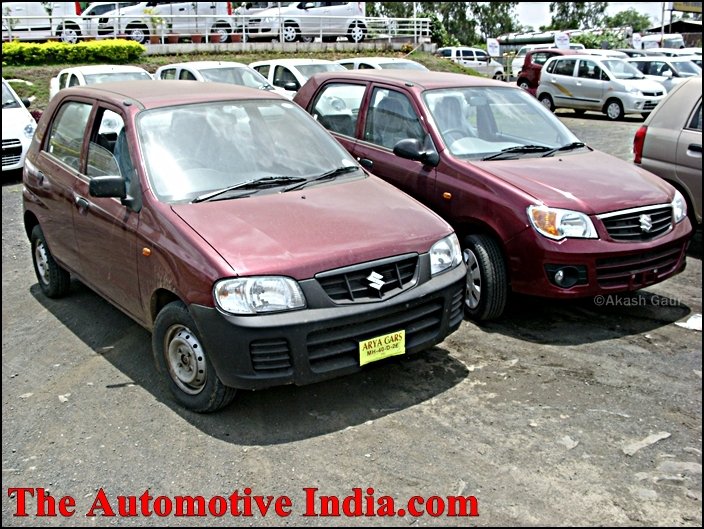 How it Looks Outside? 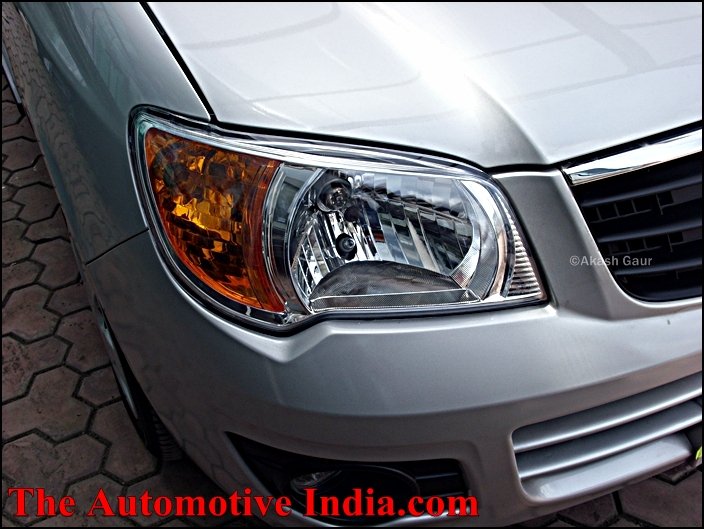 The New Maruti Suzuki Alto literally feels fresh at first look, it carries the over all design scheme from previous model but what makes it distinguish on the front are new bumpers, grille and an innocent angel like stretched and skewed head lamps. Some of us may even call it to be cues from Chinese vehicles but it sure looks much better altogether.

Now, walking along on to the side, we find the K10 to be exactly same like an old Alto, except the bonnet is slightly longer and 13 Inch wheels wear new covers similar to Maruti Swift’s but no alloys on offer. Additionally, The out side rear view mirror is not body colored even on top-end VXi, unlike earlier.

On the rear end, It is completely a different view, and to our surprise, there’s not even a single bit from the previous generation. First and foremost the major attraction is new rounded tail lamps which may not successfully please everyone, including us and the boot is redesigned to house number plate, and the additional rear lamp is placed on the middle-top of the rear glass as opposed to previous version. 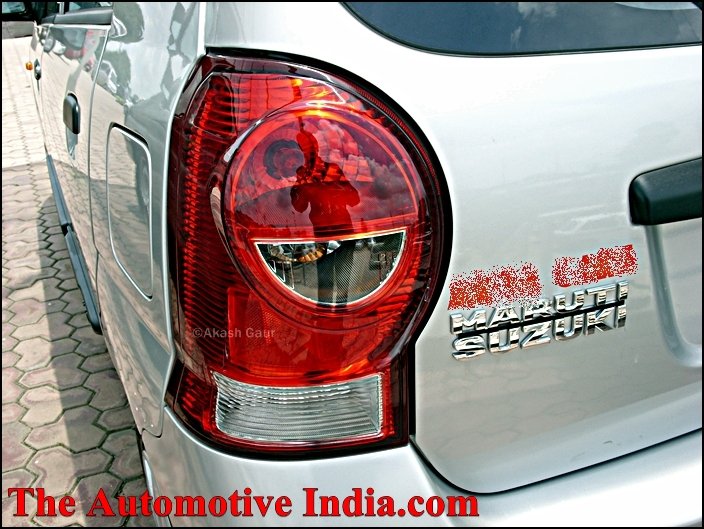 How it Looks Inside? 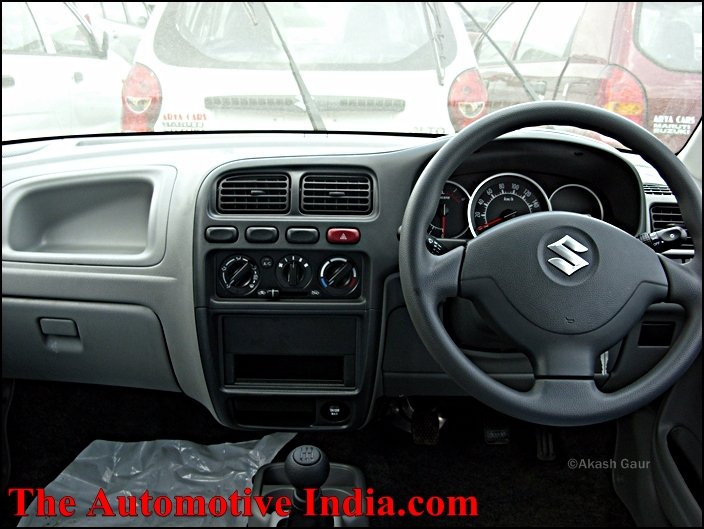 With such vibrant exteriors, one would certainly expect interiors to be all new and fresh as well but to their distress, they almost remain the same. Dashboard is unchanged with standard plastic quality and traditional gray and black color combination but thankfully, the new three spoke steering wheel and right behind it, an updated instrument cluster creates a little smile on the face. In addition, Alto gets a new gear stick, which looks rubbery and small but is nice enough to hold.

Speaking about comfort, Maruti Suzuki Alto is much suitable for average height passengers, but if you are tall the ingress and egress could become somewhat uncomfortable, similar goes with the rear too which is cramped due to the absence of enough legroom and if the driver’s seat is pushed back completely, the rear gets even more congested place to be in. Now, since Alto is basically a small family hatchback, it can not offer great comfort but it sure can suffice for a family of four with an average sized adults. 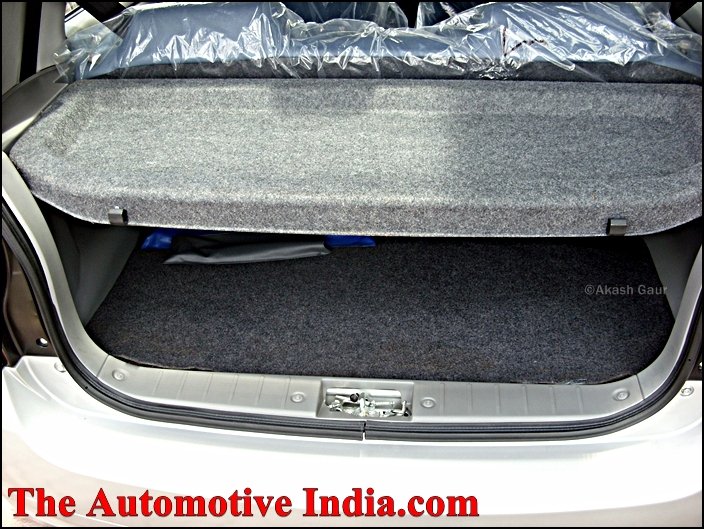 The 800cc was always criticized for its sluggish and jerky response. Nonetheless, the K10 engine has now removed these performance flaws from Alto. The new engine is quiet and responds swiftly, once the first gear is engaged and accelerator is pushed behind, you unquestionably get surprised and it will be hard to accept that this is an Alto, The same car, which begged not to be revved hard!

We have already driven Maruti Suzuki Estilo, WagonR and Astar with K-Series, So many would wonder what’s so special with the drive of Alto K10? Well, the answer is that the factor which makes AltoK10 drive much more fun than other siblings is power to weight ratio. Because Alto being lighter than most of other hatches, it is able to convert the K10 engine power into much more mechanical supremacy and hence, resulting a peppier drive so that it’s an effortless task to blaze through the traffic in no time but highway commuting doesn’t disappoints either. Thanks to the powerful K10 engine, unlike the 800cc alto, you don’t need to switch off the AC to overtake in scurry. The jerkiness that was felt when the AC was switched on has gone and you can enjoy a peaceful Highway cruise in an Alto K10.

The perfect gear ratios permit driver to achieve desirable speeds in a lesser time span. The company claims that New Alto K10 can achieve the 0-100kmph speed in about 13.3 seconds that is quite remarkable and may even put some sedans to shame. Even I was able to achieve a speed of 60 KPH from languish in neat 6 Seconds (calculated using a stopwatch), which isn’t bad too. The new version has upgraded shoes, i.e. 13” wheel which are jacketed by Tubeless tires. Cornering is now exciting, wider profile allows encountering sharp corners with ease for the reason that the body roll is not exceedingly prominent. 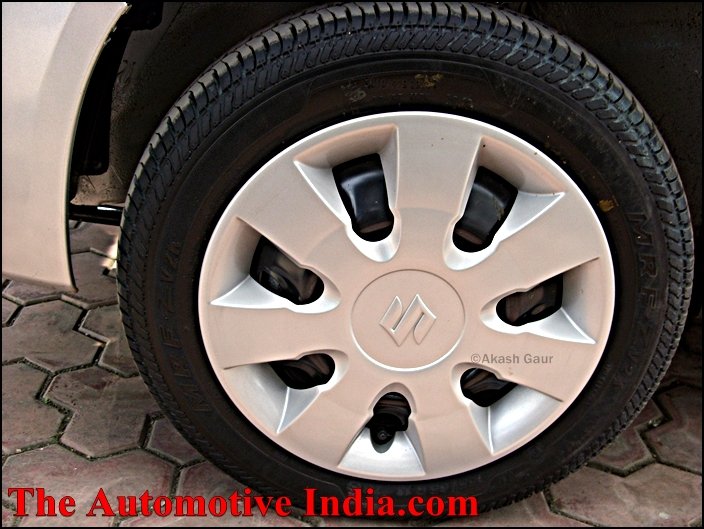 This version of Alto is one of the finest upgrade of any Maruti car till date. The K10 has already proved its efficiency and it continues to do wonders in new Alto. The engine is indeed smoother than the 800cc which was condemned for its coarse behavior and 68 PS of power is more than enough to help you zoom through the traffic with great ease.

Maruti claims that Alto is capable of returning Fuel efficiency of 20.2 Kmpl, which might not be too difficult in real-time conditions, in the vein of its forerunner. The gearbox is new as well; it is cable actuated which leads to silky gearshift but in spite of it; there still is some scope of refinement left. The ground clearance remains same but not something to worry too much about. McPherson Struts with Torsion Type Roll Control Device suspension at the front and Coil Spring, Gas Filled Shock Absorbers with 3Link Rigid Axle and Isolated Trailing Arm at rear filter most of the bumps providing a considerably bump free ride, though it could have been a lot more better, but then, the price at which you get Alto, it would be unfair to demand everything top class.

How Safe is it? 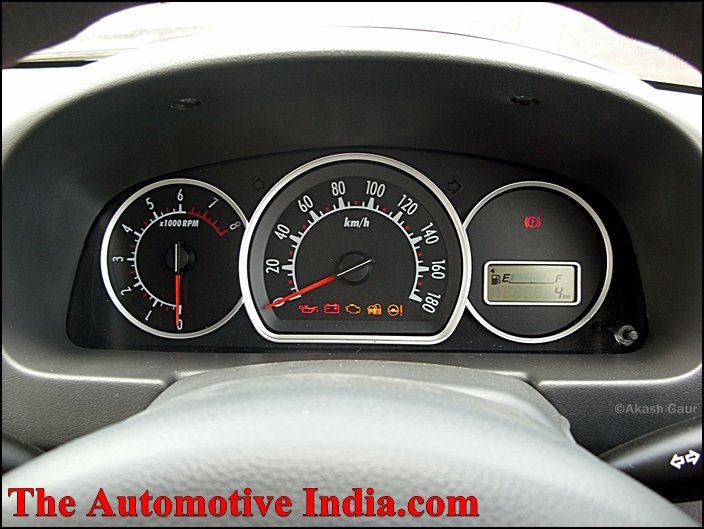 In the name of Safety, what the car offers is only a collapsible steering column, Front and rear Seatbelts etc. We wish if Maruti would have offered at least single or a couple of Airbags as an option because those times have gone when people were not so conscious about their safety. However, for the security, Alto is equipped with an Immobilizer called iCATS on both LXi and Vxi variants. 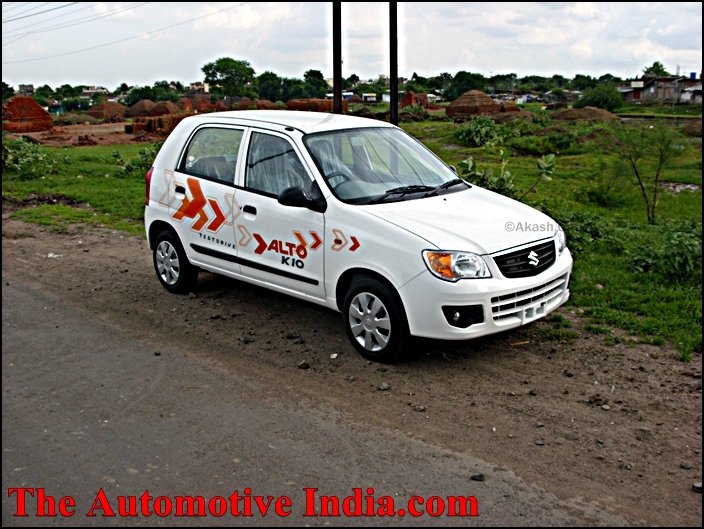 A few years ago, Maruti Suzuki released Alto to fill the gap between Maruti 800 and Zen to offer Indian buyers another choice of small stylish hatchback at an economical price. Eventually, like expected, Alto became such a hit that it even took over the shares of popular 800. Now, many years have passed and Alto is still serving the purpose for which it was actually introduced, that is to serve Lakhs of Indian families and is being appreciated for its Value for Money factor, considering the same, Maruti Suzuki has yet again hit the sweet spot, however this time, not only to please the families but young enthusiasts, with limited budget, as well and we wouldn’t be surprised if its sales figures remain on north for another decade, until it really gets a tough competition, but for now, at least we can say Let’s go Alto! And this tagline is now surely justified. 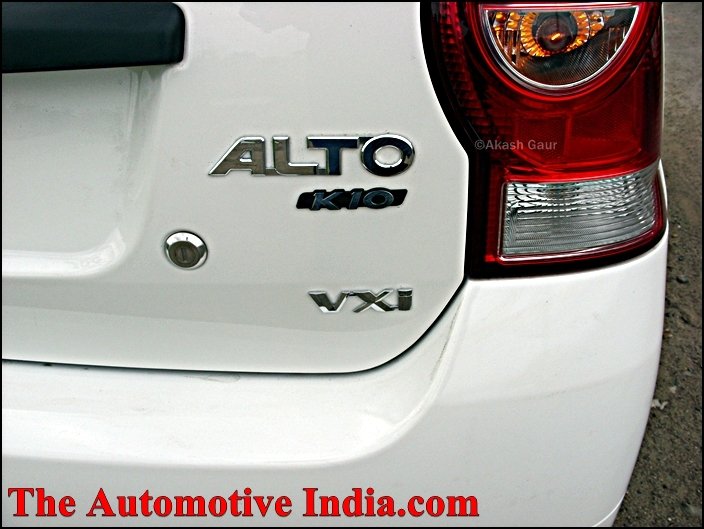 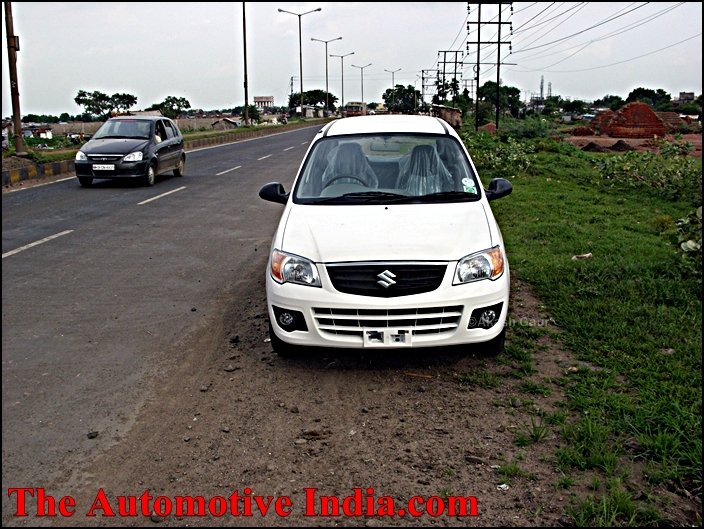 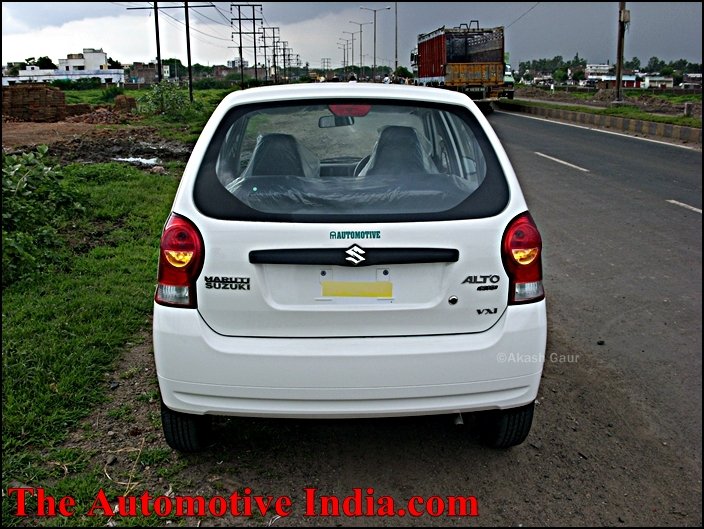 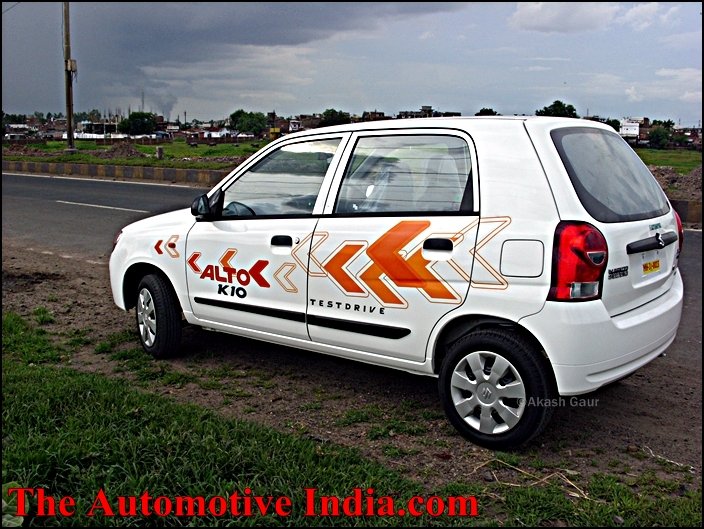 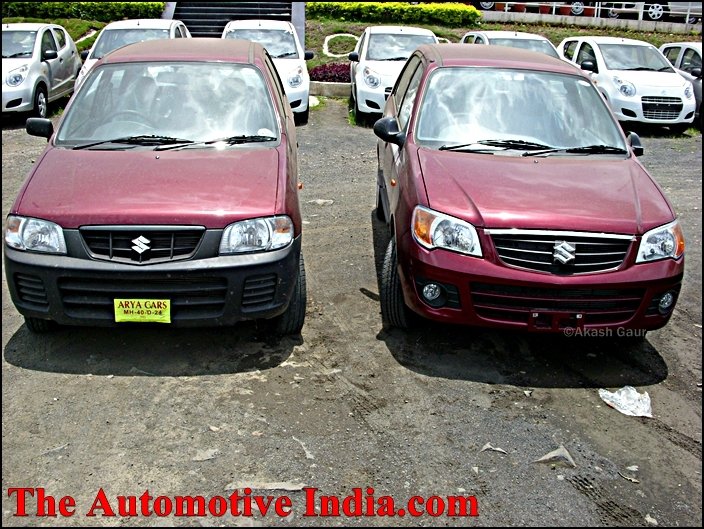 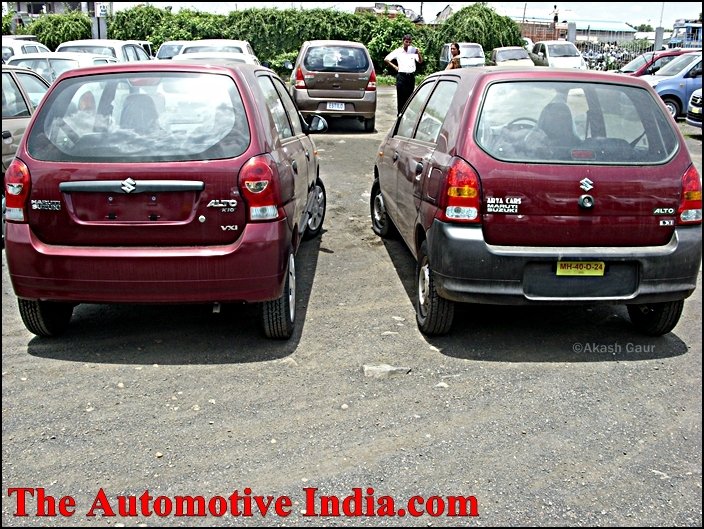 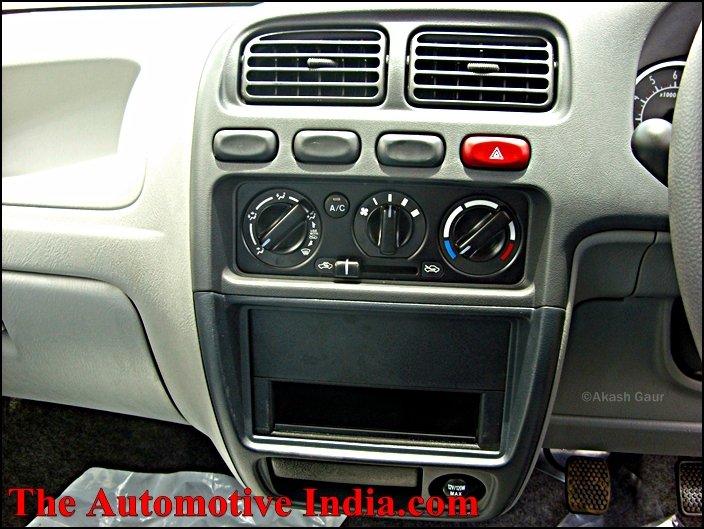 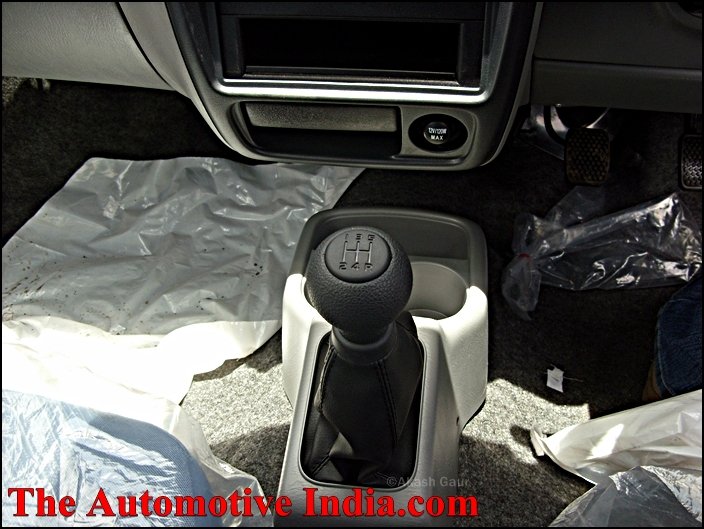 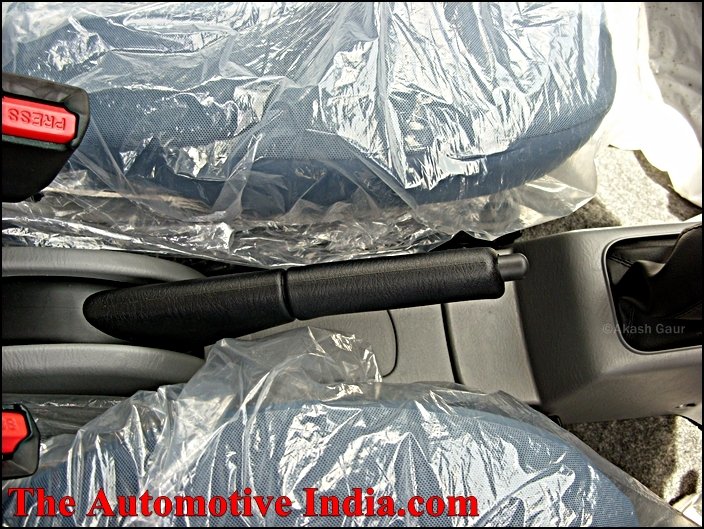 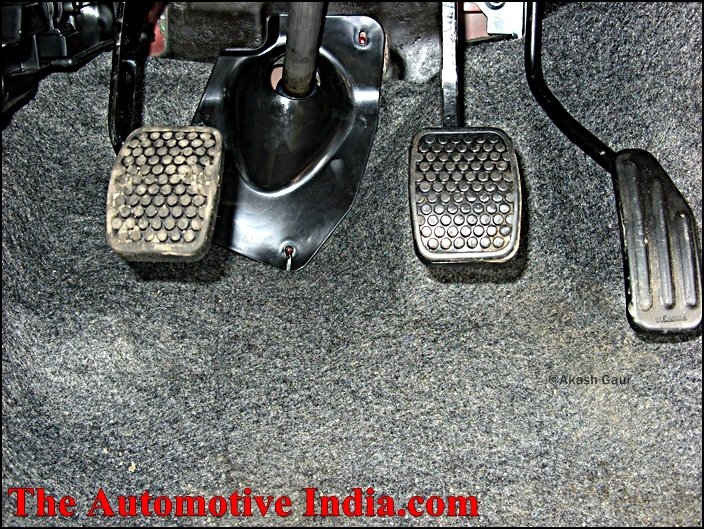 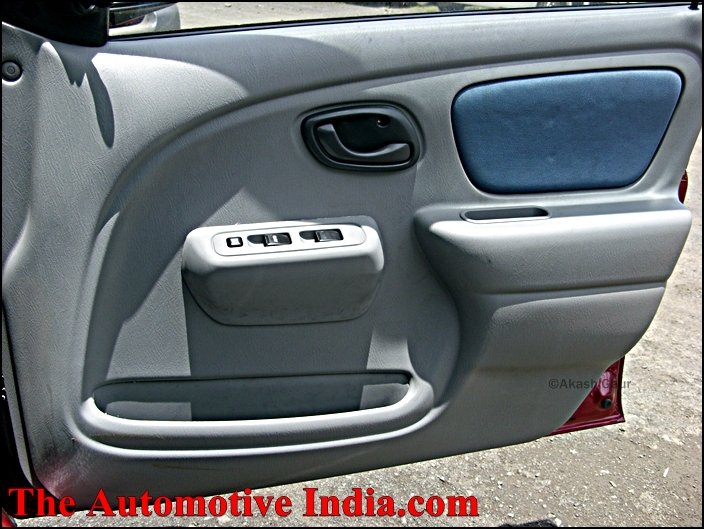 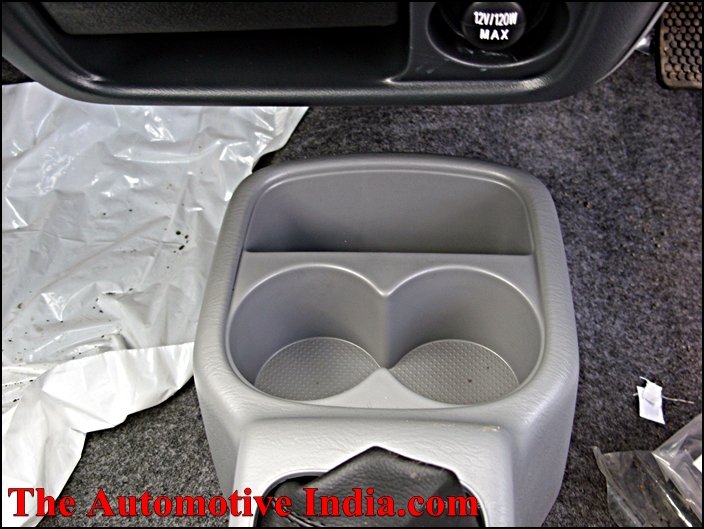 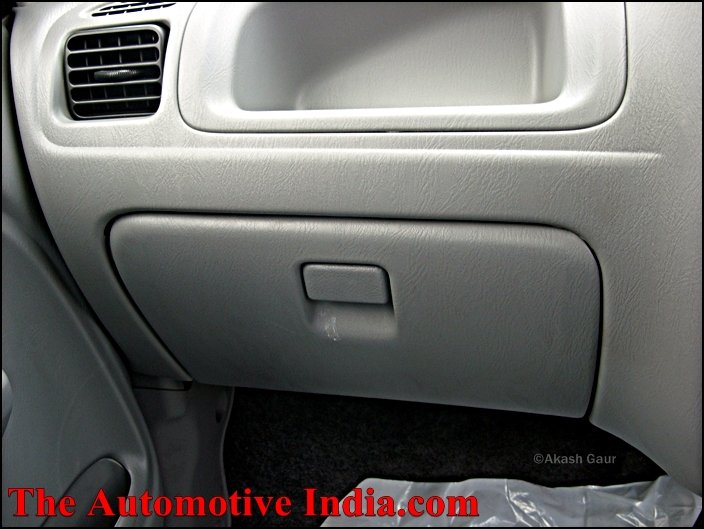 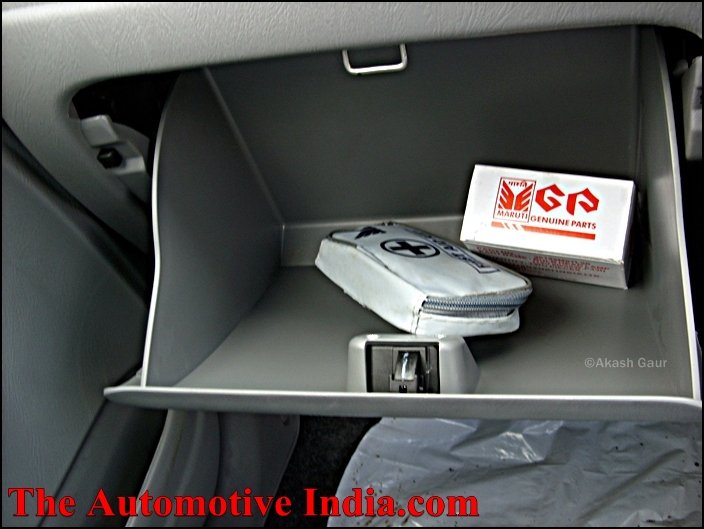 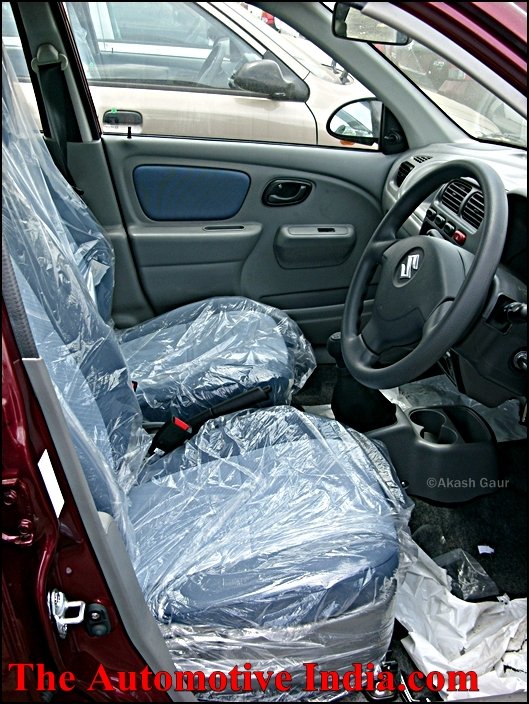 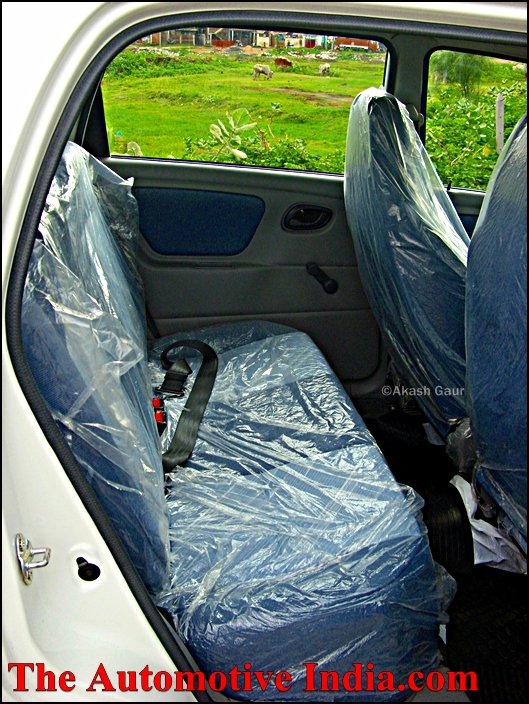 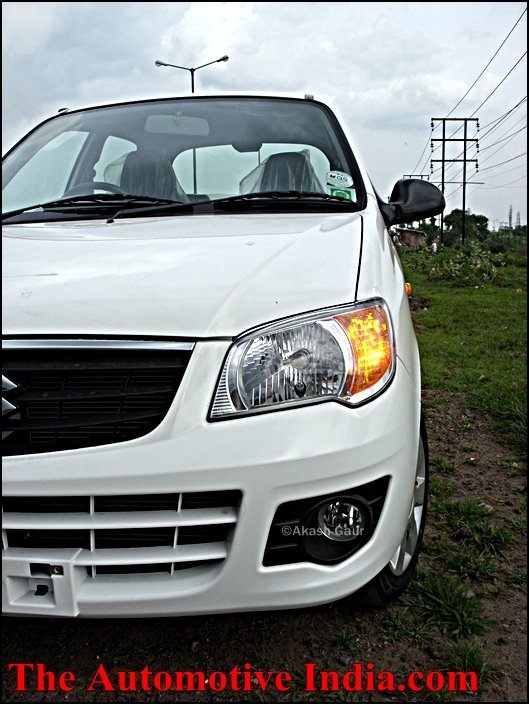 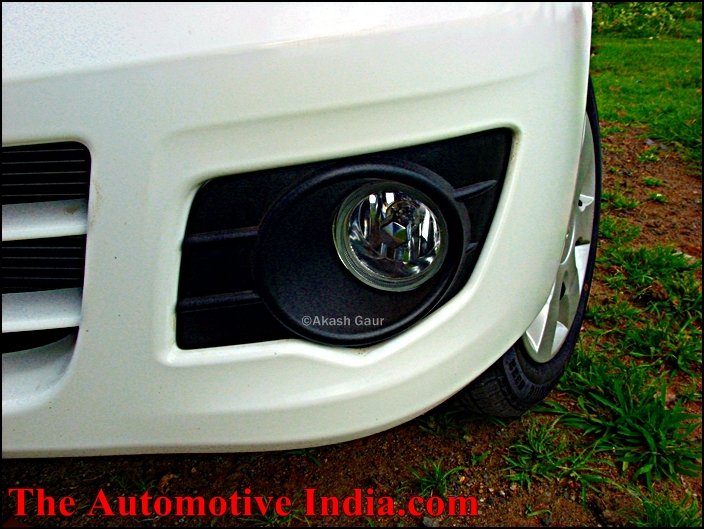 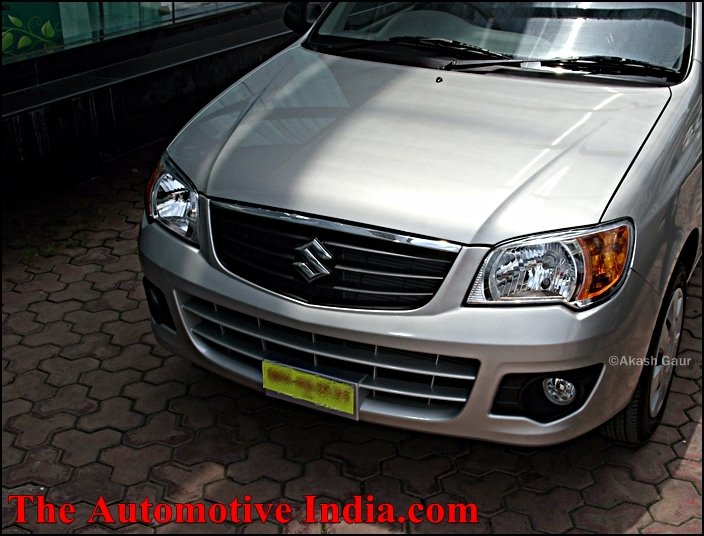 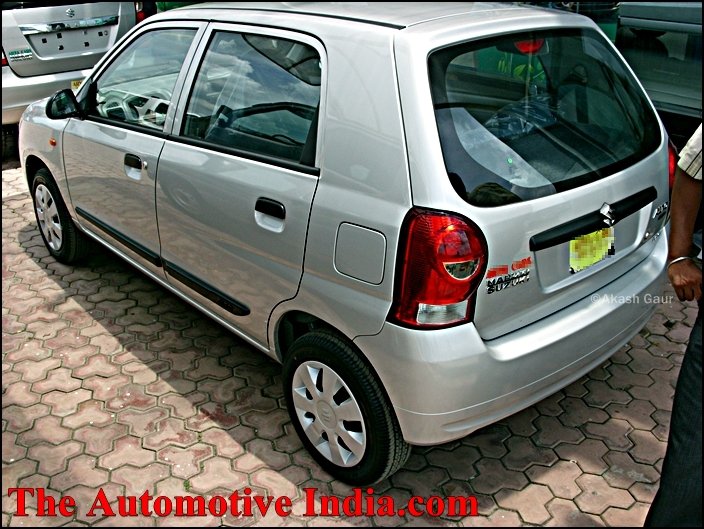 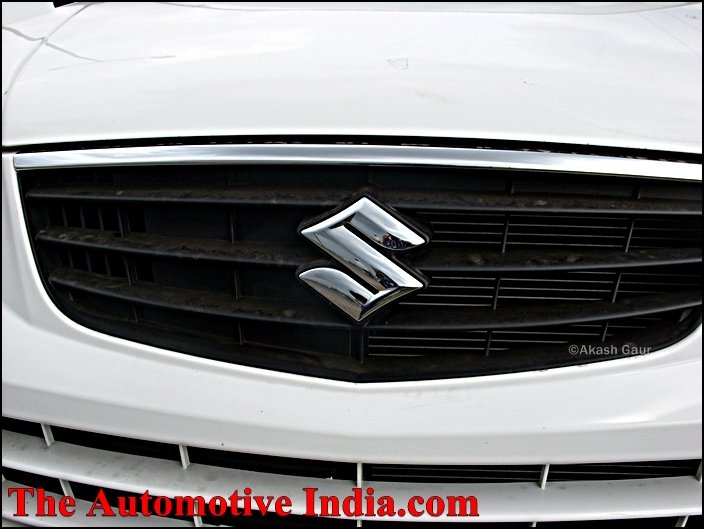 I love this upgrade from Maruti. After Wagon-R, again they have done fantastic upgrades.

Thanks RSM. The new Alto K10 as i have already mentioned in the report is one of the finest upgrade from Maurti. They have done it intelligently so that this car doesnt eat up the sales of A Star.
S

Seen Alto K10 couple of days back. But somehow I feel more comfortable in A* than Alto.

SandeepK said:
I feel A* is better buy than Alto K10.
Click to expand...

I thoroughly disagree!!! The dynamics prove otherwise. From what I know, the K10 is the rightful 'Zen'. The only replacement for the fun the old Zen provided.

A star is nothing but a mere compromise. A compromise on looks, safety and also comfort.

And those who are cribbing about the rear, I think it is beautiful!!!

alto in first pic with arrow graphics is looking very beautiful. and overall also it looks beautiful but i think would be even better if maruti launched it with beige interiors which i think came in x-fun??
S

Arun said:
A star is nothing but a mere compromise. A compromise on looks, safety and also comfort.
!
Click to expand...
The statement I made is totally my opinion. I have seen both the cars in person but somehow I found Alto at Rs. 3.5 L for Lxi is not worth one may get A* Lxi if little stretched.

Again looks are subjective.
Regarding safety, how can Alto is safer than A*?
I have not much explored much on comfort.

Again it is purely my view.