The 12th Maruti Suzuki Raid-de-Himalaya, one of the most awaited motorsport event in the country will take place from 10th October to 16th October. To make it more grueling and exciting this year’s event will take a more challenging route. This edition has 164 teams in the fray, with 277 participants; which is the maximum participation ever. The Raid-de-Himalaya event will span across 6 days to traverse a distance of 2,000 kms through the vigorously undulating terrains in the Western Himalayas.
The 12th edition of the Maruti Suzuki Raid-de-Himalaya is being organized under the aegis of Himalayan.

This year’s Maruti Suzuki Raid-de-Himalaya will pass through the most inhospitable terrains in the Western Himalayas. The Route covers some of the highest motorable places in the world. This would include Kaza (3600 mts), Tabo (3050 mts), Komic (4275 mts) in Spiti valley and Patseo (4830 mts), Sarchu (4551 mts) in Lahul valley, and the formidable Baralacha la (4883 mts). The event will conclude on October 16, at Manali with the prize distribution. The 12th edition of the Maruti Suzuki Raid-de-Himalaya is being organized under the aegis of Himalayan Motorsport Association. This toughest motoring event in the country is being supported by the Indian Army.
This year’s event will see around 154 participants from the Northern parts of the country and 65 participants from southern India. 35 participants from western India and 10 from Eastern India complete the rally entourage, These 164 motorsport enthusiasts will compete across three categories: X-treme 4-wheelers (43 teams), X-treme 2-wheelers (51 teams) (both for professional motorsport enthusiasts), and 70 enthusiast teams in the Adventure Trial category for amateurs. The oldest participant in the 4 wheeler section this year is 60-year young Harvijay Singh Bahia, in his Grand Vitara whereas the youngest participant is Apurva Kaushik, 20 years. co-driving a Maruti Suzuki Gypsy. Amongst 2-wheeler participants, the oldest participant is Rajeev Khanna aged 55 years and the youngest participant is 19-year old Parikshit Thakur. Other star participants include Amardev Singh, last year’s John Mark James trophy winner.

This year there are 11 female participants as compared to 6 in the last year’s event. Last year’s winner of Coup De Dame Trophy Ms Chander Suta Dogra is back and shall be participating with Ms Pragya Singh who shall be assisting her as a navigator. Other female participants include Ms Suchi Thakur from Dharamshala and Ms Revati from Delhi.

Adventure Trial - This version will run on the same challenging route and is open to those motorsport enthusiasts, who would like to take on the Himalayas but without the tough competition, difficulty and stress involved in the Xtreme. This section will be open only to stock cars and SUVs and only certain safety-related modifications will be allowed in the competing cars. In this year’s event 70 teams are competing in Adventure Trial category.
Bikes Xtreme - This section is open to bikes of all types and makes but there are certain regulations that the bikers will have to adhere to. Participants in this category are probably the bravest of the raiders, as they have to face the hostile weather and tough terrains without the comforts of a cabin surrounding them. The 12th Maruti Suzuki Raid-de-Himalaya, wil have 51 biker participants.

I guess that this should come under the Motorsports section as this is not just an adventure off-road event but a serious Motorsport event and currently the toughest event in the country.

jalex said:
I guess that this should come under the Motorsports section as this is not just an adventure off-road event but a serious Motorsport event and currently the toughest event in the country.
Click to expand...
+1. And i feel this is most respected and a dream of every indian motorsport enthusiast.

Mahindra Scorpio has won 3 segments in ‘Adventure Trial-SUV’ of Raid the Himalaya 2010. Here we go with more details: 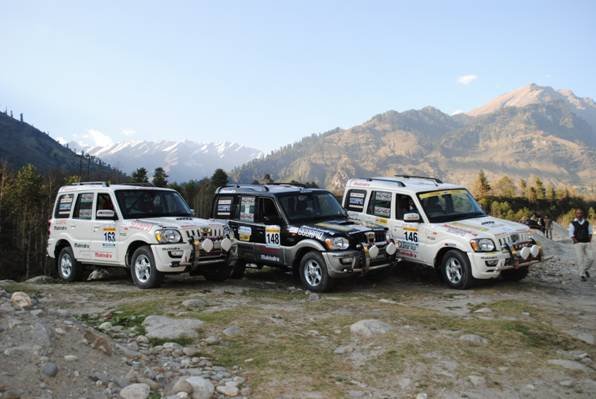 The Mahindra Scorpio, one of India’s most iconic SUVs, recently created a hat-trick at the 12th Raid-de-Himalaya which is one of the most grueling events on the Indian motorsports calendar. The Scorpio emerged the winner in a record three segments under the Adventure Trial – SUV category. Mahindra Scorpio’s domination of the Indian SUV segment has reached new heights with this achievement. The Scorpio also won Raid De Himalaya in 2009 and 2008 in the Adventure Trial - SUV category, making this a hat-trick win! Sanjay Takale & Rahul Sancheti came overall first in the Adventure Trial – SUV Category as well as first in the Stock Expert segment. The brother duo of K Prasad and K Pradeep came first in the Pro Stock Expert segment and Raj Singh Rathore and Chandrashekhar were the winners in the Stock Amateur segment: all these adding up to a triple treat for the Mighty Muscular Scorpio.

Commenting on the success of the Scorpio, Mr. Vivek Nayer, Sr. Vice-President, Marketing, Automotive Division, Mahindra & Mahindra Ltd. said, “This win further reaffirms the tough and rugged 'Mahindra DNA' of the iconic Scorpio which is a much loved, much admired brand. It is a very proud moment for us as winning the 3rd time in a row is a testimony to the spirit of adventure of the Scorpio as well as the people who drive it so passionately! ”.

Raid de Himalaya 2010 witnessed 164 participating teams grappling with subzero temperatures, highly inhospitable weather and forbidding terrain. The robust and rugged Scorpios however dominated the six-day long competition from the flag-off at Shimla on Day 1, to the close of the rally at Manali on Day 6, maintaining their poise and position through some of the most challenging conditions on earth.

Commenting on the win, Mr. Sanjay Takale, Winner, Adventure Trial-SUV category, Raid De Himalaya 2010 said, “Finishing the Raid de Himalaya is an achievement in itself. This is a team sport and we couldn't have pulled this off if we did not work together. Team Mahindra had a job to do. The rally saw a very high casualty rate due to the treacherous and unforgiving terrain and only the cars with the best technical setup were able to pull through. My biggest advantage was my navigator, Rahul Sancheti, who was spot on with direction and the Mahindra Scorpio which never gave up, no matter what the terrain was. The roads this time tested our mettle and by winning it, we just answered it right”.

This just proves the reliability of the Scorpio! 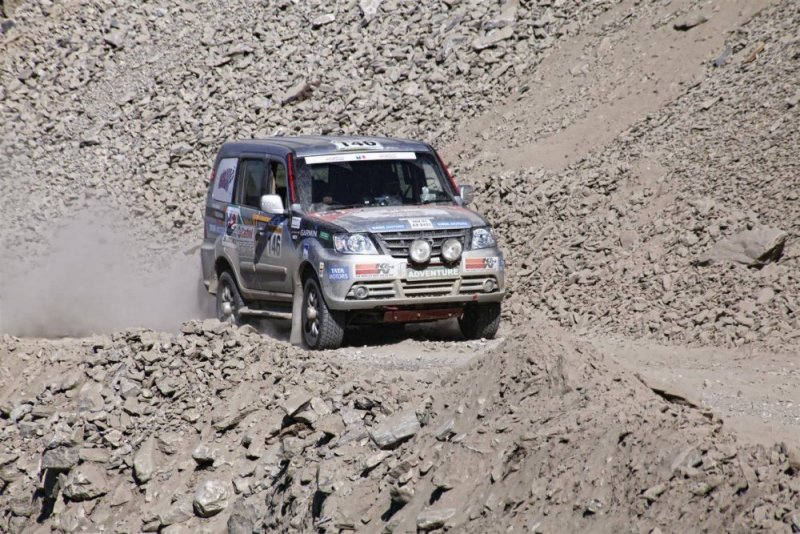 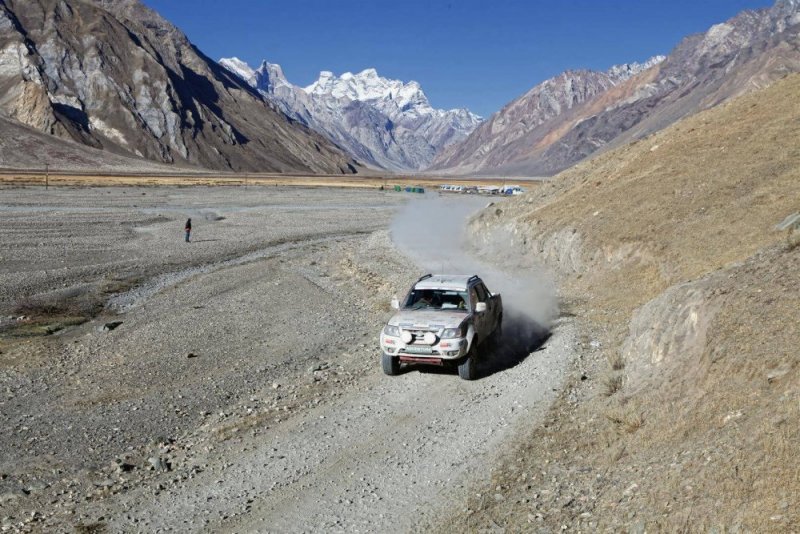 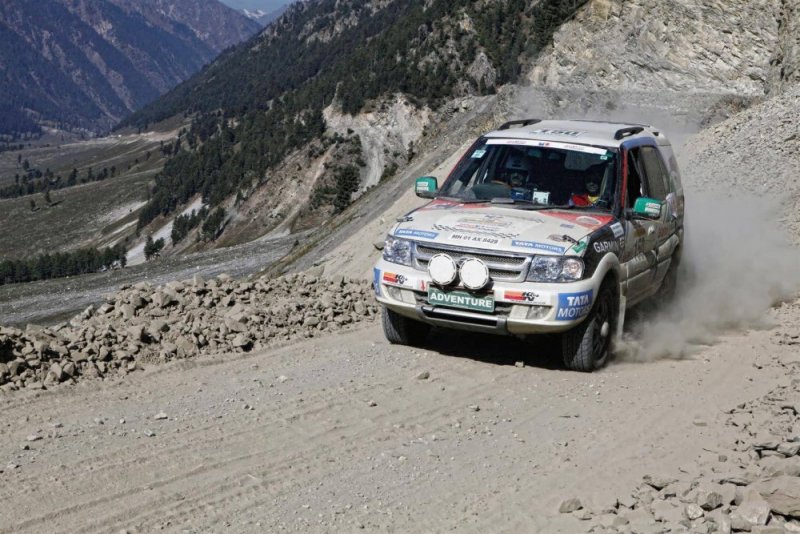 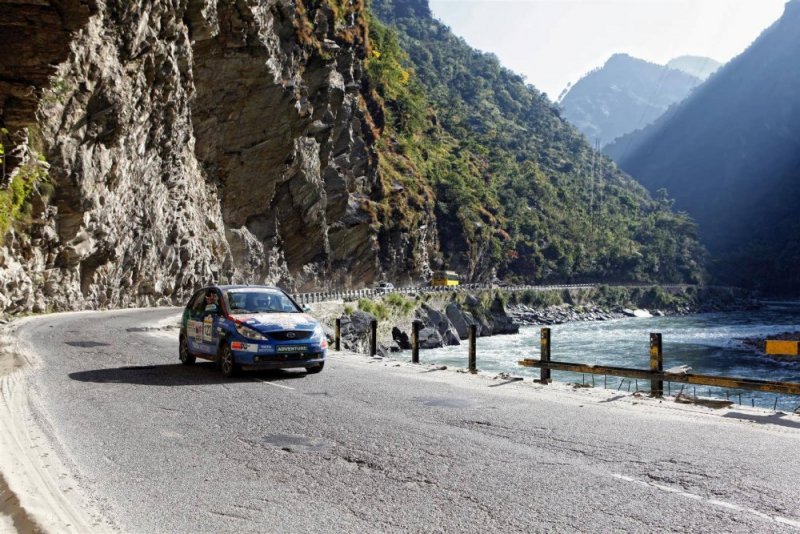 
Tata Motors Full Throttle snap up 2 podium finishes at the 2011 Raid De Himalaya Rally​
Tata Motors Full Throttle has successfully completed the 2011 Raid De Himalaya Rally, ending its maiden participation in the tortuous rally, by snapping up 2 podium finishes.
Riding on the success of Desert Storm Rally 2011 and the Dakshin Dare 2011 Rally, Tata Motors - Full Throttle team entered the 2011 Raid De Himalaya Rally with 3 Tata Xenon XTs, 2 Tata Safaris, 2 Tata Sumo Grandes and 2 Tata Indica Vistas. The Tata Safari of Mr. Sanjay Takale and Mr. K Chandrashekhar locked up second position in the Pro Stock Expert SUV class of the rally, while the Tata Sumo Grande Dicor of Mr. G.S. Joshy and Mr. Chandramouli claimed third spot in the Stock Expert SUV class. The two cars stood 4th and 5th in the overall Adventure Trial category, which saw over 65 entrants, this year.
The rally, spread over 6 days, through a treacherous route embedded in the great western Himalayan ranges, covered a distance of over 2000 km, starting at Shimla, passing Mandi, Kullu, Kangra and Chamba, and entering Jammu and Kashmir through Bhaderwah, Kishtwar, Kokernag and Ananatnag. The cars traversed through some of the highest passes in the world, enroute Kargil, Rangdum, Dras, Kargil and Zozi-La, finally ending in Srinagar.
Tata Motors hadannounced the launch of Tata Motors Full Throttle, a platform for steering the company's participation in motor sports and allied activities on 15th February 2011. The platform will help the company in organising and synergising all efforts and activities in the area of motor sports, including development and testing.
Tata Motors has earlier participated in several international rallies such as the London - Capetown rally in 1998, ASEAN rally in 2004 and the SAARC rally in 2007 with the Tata Safari. Both the Tata Safari and the Tata Xenon XT, a 4x4 lifestyle pickup, have also been driven in various rallies in the past by independent participants. 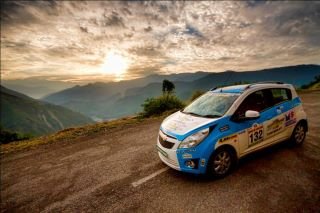 ​
Congratulations Chevyites! Yudhvir Singh & Pradeep Chauhan, you made us all proud! 13th Raid De Himalaya, 2011: The popular Chevrolet Beat wins top honors, at the highest motorable arena of the world - The Himalayas, in the Stock Amateur Category with 1stposition overpowering extraordinary competition amongst men and machines! With 74 entries in the Adventure Section, the Chevrolet Beat stirred to victory by two exceptionally skilled drivers: Yudhvir Singh from VSSM & Pradeep Chauhan from Engineering and made us proud. Temperatures went as low as -12 degrees which was indeed a grueling test of the overall fitness of both the drivers and their skills of navigation and handling the vehicle as well. The Beat was the smallest car in the entire lot of 74 cars, with competition like Scorpio, Safari , Endeavor, Gypsy, Xenon, Palio, SX4, Swift, Indica Vistas, etc and to our surprise, the Chevrolet Beat did exceptionally well and was handled without a glitch and driven back from Srinagar without any halts! We would like to congratulate both the drivers and the entire team that supported the Beat during the event for on track-side service and Saurabh Vats, our Director Marketing who is actively associated with motorsports in India and organized the complete back end for this event including vehicle readiness and support. Three Cheers to both the drivers and the tough and muscular Chevrolet Beat!
Click to expand...
Last edited: Oct 23, 2011

final results and some pics!!

Results are basis on what parameters? Starting point to ending point? Including halts (I dont think so)? Please assist. I am a solo rider so eagar to know how these exepedition works
You must log in or register to reply here.