XUV5OO scores a 4 star rating in the ANCAP crash test - 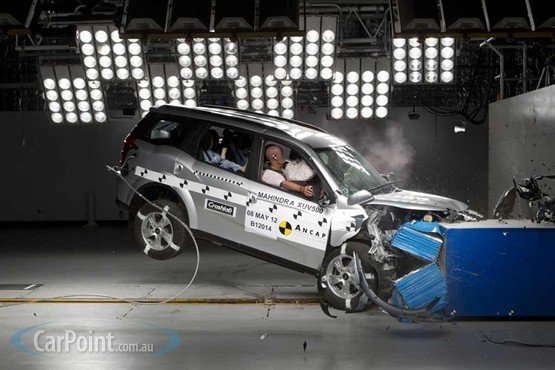 This is better than Mahindra’s other Australian offering, the dual-cab 4WD Pik Up ute, which rated three stars in earlier ANCAP testing announced in April this year. And to put that in context, the Mahindra rates the same score as Nissan X-TRAIL, Suzuki Grand Vitara, Mitsubishi Outlander and Hyundai Santa Fe. It's not in the same league as five-star rated SUVs the likes of Mazda's new CX-5, Skoda Yeti, Hyundai ix35, Mitsubishi ASX and Subaru Forester.
Click to expand...
Here is a video for the same -

Wow that's a great news, Unlike India developed market's give lot of importance to the safety equipment's and the car's crash rating's, Mahindra has passed one hurdle to establish themselves, now they need to concentrate on giving niggle free product's.

For detailed explanation, you can refer this link -

Very reassuring, i am pleasantly surprised with the results.

raj_5004 said:
For detailed explanation, you can refer this link -

The passenger compartment lost structural integrity. Protection from serious leg injury was poor for the driver due to excessive rearward movement of the brake pedal
Click to expand...
This is good

The vehicle scored a default score of 16 out of 16 in the side impact crash test.
Click to expand...

visran said:
This sound's scary
Click to expand...
Perhaps that is the reason it scored a 4 star and not 5!

Well,being true I was expecting 3.5-4 stars from the XUV.
And yes,this new rating has gained some more respect for XUV in my eyes.

Read the complete article and only demand of mine is:-
M&M brings us the latest and best of the technology and what I want is the 5 star rating in the next test.
BTW,what about the ratings for 2WD variant?
Why is it so that 4WD variants score higher in the crash tests?
Example:Tata Aria 4X4 and 4X2 ratings.

Not so in the XUV. All safety features remain the same in the XUV 4x2. There are no structural changes as well. Hence, XUV 2WD will have the same rating as the XUV AWD.

^^Doesn't the 4WD system requires some more additions in the chassis to make it suitable for 4WD?
And doesn't the added parts of 4WD make any difference in the safety?

TSIVipul said:
^^Doesn't the 4WD system requires some more additions in the chassis to make it suitable for 4WD?
And doesn't the added parts of 4WD make any difference in the safety?
Click to expand...
Not at all.

Actually this issue is with most of the SUVs but not with sedans,what could be the reason behind that?
Is it the higher placing of steering wheel and hence airbag?But then in sedans also the steering is placed even higher.

True. I dont know the reason but even I have observed that leg injuries are more prevalent in UVs when compared to sedans.

^^Eh,that means we have got a new thread title:-
How sedans are safer than SUVs?
I

This is highly debatable topic and in my view very situational!
You should read this rather

^^Let's debate comparing the cars like XUV 500 with cars like Toyota Corolla,instead of going up towards those biggies.
Rest speed is also a factor causing a lot of difference.Where SUV drivers lose their confidence at 130-140 kph max,its the sedan drivers who do upto 160-170 kph without any worry.And hence in case of an accident you can expect the sedan occupants to die in larger numbers.
Else if both are doing same speed then maybe no one will die in sedan because the driver can save it from collision by making a use of dynamics and heavy steering inputs.
You must log in or register to reply here.