Hey guys today had been to SKS Auto for few checkups, before long trip.

Btw left the vehicle at dealerships for a free checkup camp at A.S.S.

Btw there is discount of 20% on service done at this time, as well as 5 % on spares.

Don't know whether there is similar camp at other A.S.S.

The checkup is exclusively for Scorpio & Bolero customers.

Thanks for the information. Was the check-up / service satisfactory enough? This is advisable for all Scorpio owners in Bangalore (We already have a few in forum).

350Z said:
Thanks for the information. Was the check-up / service satisfactory enough? This is advisable for all Scorpio owners in Bangalore (We already have a few in forum).

Drive Safe,
350Z
Click to expand...
I will be getting my vehicle tomorrow.

The dealership is flooded with vehicles.

Btw i had other checkups which appointment was taken by Mahindra from Mumbai, will be discussing it tomorrow in my thread.

Where they insisted to go for 70 point check up too.

Also a authorised personnel form Bridgestone was measuring the tyre density and tread depth with an instrument.

Good to know that the worst wear on my Hawk's tyre is still 42 % and he appraised me for driving style in 3 years, and also the tread depth i had in my hawk. 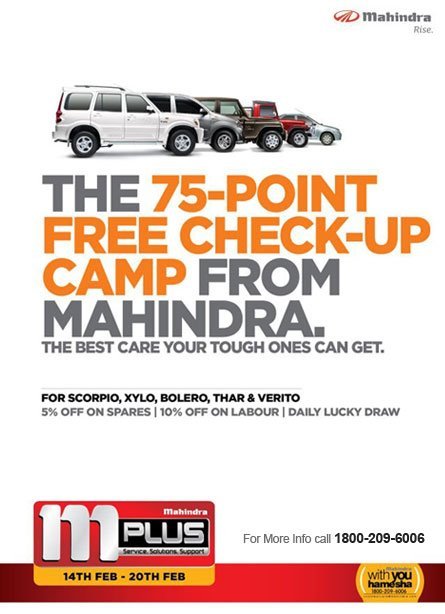 Superbad said:
since mine is a new car with no complaints so far what should i expect if i were to go in for the check up
Click to expand...
Nothing much. They would probably do a free wash and polish.

I had my 25,000 km service done two weeks back. But I am still going to attend this camp. Let me see what is their diagnosis.

Checked with SKS and IG. IG requires an appointment whereas SKS does not - just bring your vehicle.

Even i got a call from Mahindra for the checkup camp .

Will be visiting tomorrow.

This is great. I didn't got any news.

I attended the 75 point checkup at SKS BG, Bangalore on Feb 18, Saturday. I was told that camp would start at 9 am, but came @ 10 hoping that there would be a big queue. But to my astonishment, nothing started till 11 am !

This is what M&M had advertised in their pamphlet:

First, my vehicle got an exterior wash but no interior cleaning. Then they took the vehicle for a road test. I had the following issues:

Except for #3, they fixed/checked everything. Ski racks and rear door were causing the vibrations. They were tightened. They also improved the clutch play. Then, they replaced the left ORVM under warranty but the new one was vibrating more than the old one

Adding fuel to fire, they said that all refresh Scorpios had a problem with their left ORVM. I just blasted them and called up the CEO/GM of SKS BG. After that, they assured me that they would fix it during my next visit to ASS.

Don't know when Mahindra dealers will get their act right the first time. Everything works on escalation to seniors and customer care

Out of 75 points, they just checked the engine compartment and did not do anything on the remaining checks. For this, they took sweet 5 hours!

When asked, they said that's what they do as it was a free checkup. Also, they were running out of service folks as many of them did not turn up (Saturday) and they had too many vehicles to service (vehicles that had come for regular service were also present).

The entire camp was run in a disorganized and chaotic way. No priority, no first come first serve.

Whoever could get hold of the Service Manager, they could get their vehicle serviced. Adding to the woes, some local politicos came with their Scorpios and they were given preferential treatment.

Get your Mahindra vehicle inspected for free of cost !

sudharshang said:
To all Bangaloreans,

Get your Mahindra vehicle inspected for free of cost !
Click to expand...
Wow that's news to me.

Will get an appointment fixed by tomorrow.

I could not visit Karnataka Agencies, as there was a travel plan to Murdeshwar.

How much does painting the entire front bumper including side fenders (wheel arches, if I am correct) cost (inclusive of labour charges) ?

Have you asked this @ SKS, IG, Sireesh or Chrome ?

I am planning to get this done in this service camp as there is 10% discount on labour charges. There are lots of scratches and paint has peeled off in many places in the front bumper.

Note: Offer and discounts in this camp

I have never gone for painting in these 4 years of ownership.

During the recent trip in Kerala, a bus brushed my stationary hawk on the front guard.
But nothing happened, also while i had parked some one had brushed the right side door.

Will be looking for touch up.

Which part of bumper are you looking for touchup?
Or thinking to paint the whole bumper.

Side wheel arch costs -591/-
You must log in or register to reply here.