Its going to be shorter in length to attract low excise duty in order to keep the price down.

But its not the price where Logan failed in India.

Just because of ASS & looks it had a major hit !!

Renault should now concentrate on this.

Agree with Zinam. However this Logan should come with 1.5 engine plus all nobs and whistles. This will definitely help in selling more.

Here is a special update on the Logan. Mahindra has decided to rename the car as 'Verito', meaning truth in Latin. Read complete details below.

Mahindra & Mahindra has rechristened the Renault Logan as ‘Verito’ (truth in Latin). This saloon, now in its all-Indian guise, gets a moniker that is in line with M&M’s policy of giving all its vehicles a name that ends with an ‘O’. The Logan has been in M&M’s hands after the Mahindra-Renault joint venture fell through last year. Sales have gone up since but largely because M&M cut the Logan’s price and re-positioned it as an entry-level saloon. Until now, the Logan is being sold with the Renault lozenge sitting pretty on its nose. Mahindra will change all of that when the Verito goes on sale later this month as it will be devoid of all Renault branding. Without making extensive changes, steps have been taken to improve the image and appeal of the Verito. It is expected to feature sporty side cladding and re-styled rearview mirrors. While an under-four-metre variant is in the works, the Verito will make its debut with no significant mechanical or structural changes. So the full, generous boot will remain intact. The pricing is not expected to change significantly though M&M is working to increase localisation and reduce costs. The sub-four-metre variant is expected later this year.
Click to expand...
Source: SCOOP! Logan renamed Verito | Autocar India

Mahindra has launched the Verito, a rebadged Logan. That essentially sums up this product. The engines and equipment are no different. The car is very much the same old Logan with flat and boxy proportions.
The roof rails and door cladding haven’t helped transform the look. Mahindra is selling a decent number of Logans ever since it slashed prices last year and there’ no real need to transform it either. The Verito will aim to continue that momentum until the sub 4-meter variant arrives, which will appeal to hatchback buyers.


Press Release
Mahindra & Mahindra Ltd., a part of the US $ 11.1 billion Mahindra Group, today announced the launch of its sedan – the Verito. The new Verito retains the famed strengths of the Logan, while adding a new style with some key changes. Now equipped with several rugged and sporty styling elements, the Verito is all set to be the most exciting buy in the entry level sedan category for Indian consumers. It is competitively priced at Rs. 4.82 lakh (petrol BS3 version) & 5.62 lakh (Diesel BS3 version). The BS4 compliant version is also available for BS4 markets.
Verito which is derived from the Latin word ‘Veritas’ means truth and goes with the overall image of an honest, sensible and dependable car.
Powered by the Renault engine, the Verito is a sedan which remains true to itself and the consumer by offering the unique proposition of space, mileage and performance along with style. The exterior of this car is quite unique with ski racks and side cladding, which are available for the first time on a sedan in the Indian market. The chrome rear appliqué and rear spoiler increases the car’s premium quotient and gives it a distinctive look at the rear. These new additions on the exterior align with the tough, rugged and sporty DNA of a Mahindra vehicle.
On the performance front, the Verito retains all the strengths of the Logan. The new Verito offers the same Renault drive train with the option of a 1.5 DCi CRDi diesel engine or 1.4 MPFI petrol engine. Equipped with this, the Verito offers an amazing 21.03 KMPL fuel efficiency (diesel mileage as per ARAI). The Verito remains the broadest car in its segment, offering unmatched cabin space. It also boasts of a spacious seating capacity and a boot space which is one of the largest, with 510 litre capacity.
Similar to the Logan, the Verito offers a host of safety and technology features like ABS with EBD, Driver Airbag, head restraint for all seats, side impact beams, driver information system etc. Further, a long wheel base of 2630 mm ensures a very smooth ride even on Indian roads.
Packed with class leading space, comfort, proven technology, safety features and a low running and maintenance cost, the Verito scores highly over its nearest competitors.
Mr. Rajesh Jejurikar, Chief Executive, Automotive Division, Mahindra & Mahindra Ltd. said “The Verito, with its unique value proposition aligns with the Mahindra DNA of offering tough, rugged and sporty vehicles. For the first time, we are using social media platforms to unveil a new product, reflecting alternative thinking. The earlier Logan will continue to get complete service and spares support from us.”
Features of the Verito
The Verito has several new features which include:
* Mahindra Logo
* New bold fog lamps
* Side cladding
* Roof rails/ski rack
* Rear Chrome appliqué
* New Upholstery
* New Colour – Twilight Blue 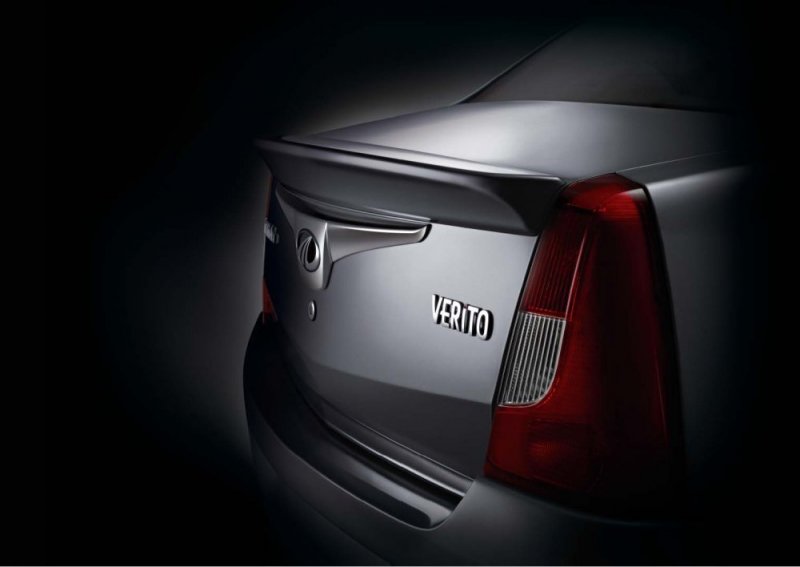 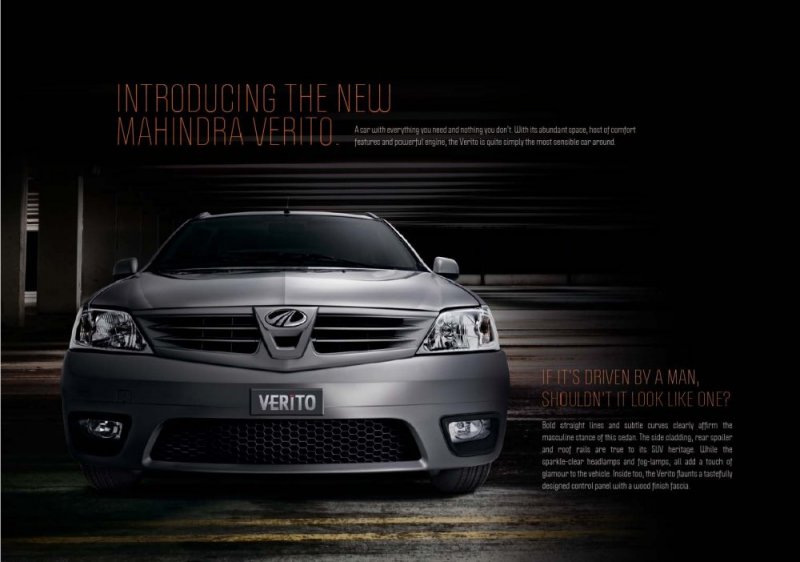 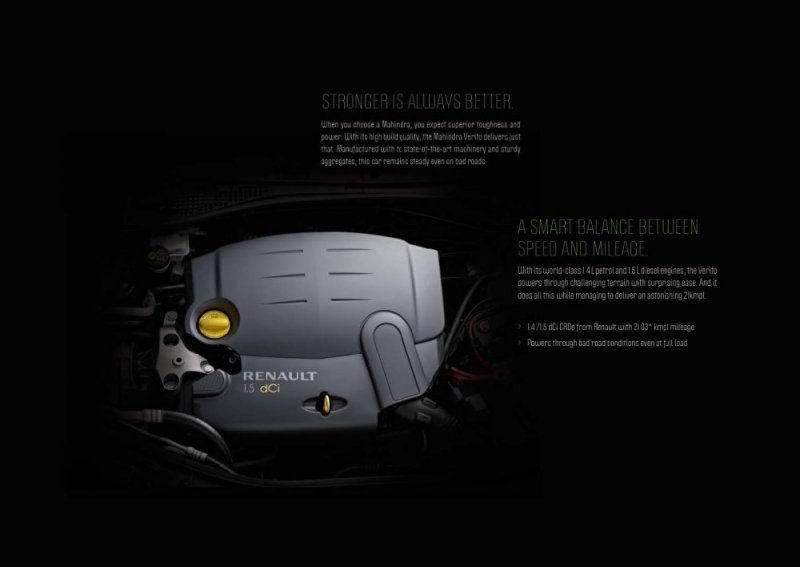 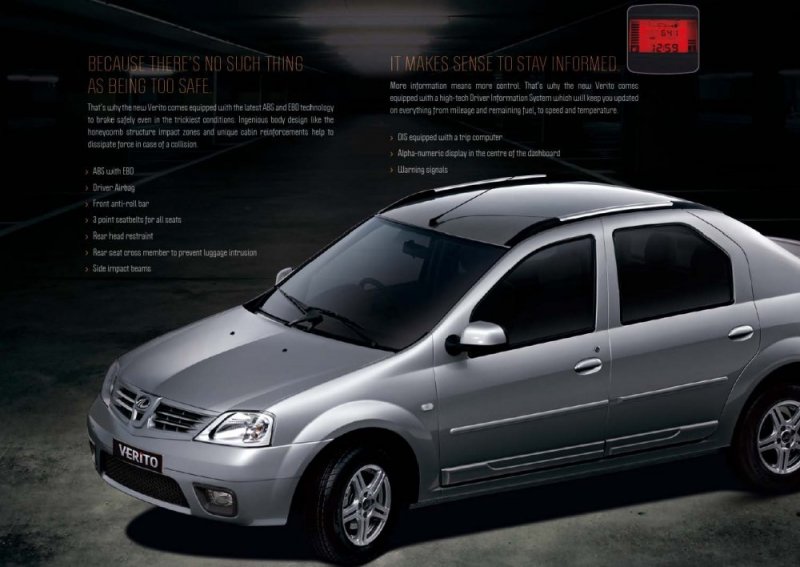 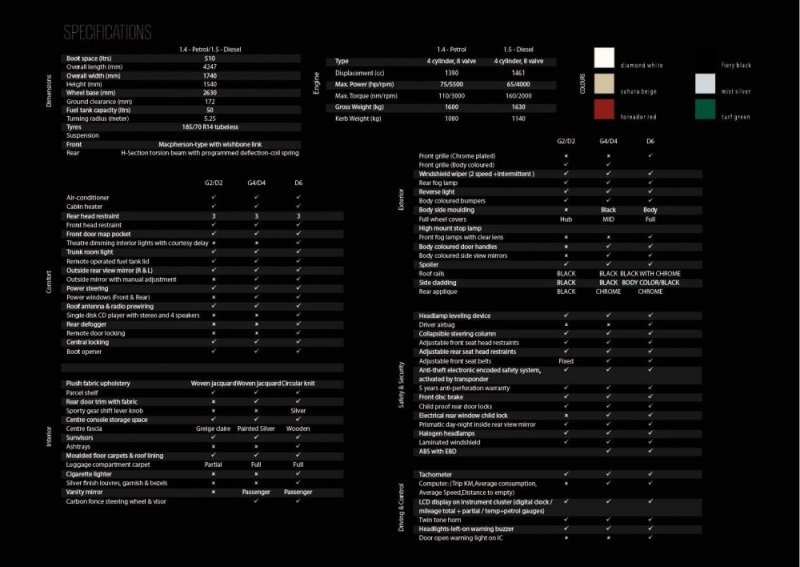 its a very good product from mahindra which failed mainly cause of poor pricing policy either from renault or mahindra and then after price slashed, see the difference with good response, better built with good engine which runs almost for more then 3-4L kms which i have seen in some of meru cabs.Now when mahindra planned to rename it after cutting off with renault, i feel they should also comeout with changed interiors, a bit of exteriors and see the result in sales if this car.

Not really much to comment about. The pricing has been a key strength of Logan but what exactly it demands is a fresh face. This could have been a perfect opportunity to launch the face lifted Logan with Mahindra badge, but unfortunately, Mahindra missed it a big time. Plus, because this Logan has only a Mahindra Logo as new addition, they considered launching it online, consequently missing a lot of press / public limelight too. Let’s hope that ‘Verito’ does not create confusion amongst new buyers and keeps up to its own charm.

A year ago Mahindra was trying to phase out this model from market. Donno for what reason they are doing this gimmick now. IMO LOGAN is the worst car in it's lot, except some goodies like it's space & engine and that was the only reason where Mahindra got some sale in Taxi sector.

This is how good cars in our country goes unrecognised. If the facelift would've been major, the car would have had a new lease of life. What does rails have to do with a conventional sedan anyway?

These are few first pics of the Verito taken from NDTV CnB show page on facebook. Looks like the base version with no fog lamps & black side claddings.

I think logo is also changed from Renault to Mahindra....otherwise you can see Renault logo on all Previous Logan..

ken peterson said:
I think logo is also changed from Renault to Mahindra....otherwise you can see Renault logo on all Previous Logan..
Click to expand...
Yes thats true they have changed the logo.

Earlier, many thought Etios was inspired from the Logan. And now, even M&M have taken inspiration from the Etios, especially the rear of Verito. 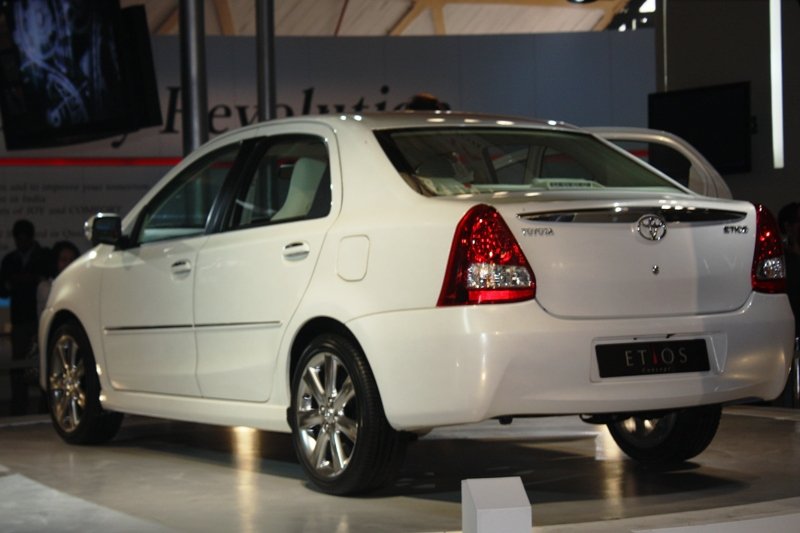 The Verito has that chrome strip on few of its variants.

ronz said:
A year ago Mahindra was trying to phase out this model from market. Donno for what reason they are doing this gimmick now. IMO LOGAN is the worst car in it's lot, except some goodies like it's space & engine and that was the only reason where Mahindra got some sale in Taxi sector.
Click to expand...
sir, sorry to say but mahindra has got quite good numbers of sales of its logan primarily in taxi segment and is doing good as well in down south.Good built quality, superb space inside as well as with boot area, good solid engine which runs superbly with more then 2L+ kms and still going smoothly.What mahindra missed was its poorly pricing policy as well as marketing strategies.Hope they could cover with new model, but they should have changed its looks, interiors as well which was perfect timing for them to do so after parting out with renault.
You must log in or register to reply here.