So the guess by RSM was correct. Buy a LOGAN and get 3 VIP baggages free.

Nice interiors for Logan. I personally like this car. Hope this time it works, but i doubt.

Buddy interiors ar good no doubt about it, but the exteriors remain the same. I wonder what their problem is? Why dont they do some facelift?

hah..by what way renault will befit to improve sales of logan by giving away free VIP suitcases.

Is Renault Planning to launch shortened version Logan in India? Read this;

""DNA seems to have the solid proof of a shortened Renault Logan in the pipeline for the Indian market. To improve sales M&M has long been asking to reduction of Logan’s length and increased localization.

But Renault till recently did not nod for unknown reasons. Maybe they planned to produce the Logan on their own in the Chennai facility?

It seems Renault has indicated to its suppliers that a tinkered Logan is indeed on the cards and a shortened Logan is ready for internal evaluation. This enables the Logan to be classified under “small cars” and thus qualified for a 10% excise benefit.

Carlos Ghosn, CEO Renault Nissan, expressed his disappointment over the poor showing of this globally successful model in India. He said he was not happy with the product’s evolution in India. Could it be possible that Logan’s production would be moved to Chennai after all?""
Source:IAB

I think DNA was correct.

See the scoop from BS Motoring. 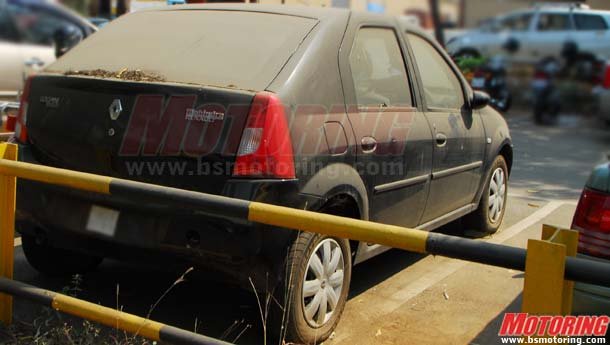 While the market is rife with rumours about Mahindra Renault's solution for the Logan, we have in our hands exclusive photographs of the Logan compact sedan which we can now share with you.

If you notice closely, the picture shows a chopped boot, more like a notchback to help make the Logan fall under 4 metres. This makes the car fall in the 10 per cent excise bracket for small cars under 4 metres instead of the 22 per cent excise bracket it currently falls under. This could reflect on the Logan's pricing, making it at least Rs 30,000-50,000 cheaper than the existing Logan.

Since the excise duty benefit also entails an engine up to 1200 cc for petrol and 1500cc for diesel, Mahindra Renault could continue with the existing diesel engine but none of its petrols would help it get the benefit. One option they could exercise is the Nissan Micra's 1.2-litre unit that could be brought in for the job, subject to engineering requirements such as mounting points and other allied tweaks. The 1.2-litre engine with 80 bhp is being assembled at Nissan's facilities off Chennai for the Micra, with components coming in from various countries, including Japan and Thailand.

The Logan's position in the C-segment has been dwindling over the last two years. When it was launched in mid-2007, it immediately captured a significant share of the market, selling as high as 3000 units a month. But sales started to fall towards the end of the first year and just last month Mahindra-Renault moved out less than 250 units. Some of the key reasons for the Logan's poor sales have been attributed to its dated design, lack of features and a higher price tag than more contemporary cars like the Maruti Suzuki Swift Dzire and the Tata Indigo Manza.
Click to expand...

the above pic seems to be a photoshop job or is it only me?

Not sure about PS work, but i can't see any boot now.
Who will buy Logan without boot?

I understand the Logan is not doing well these days and some refreshment is required, but err... never expected in terms of this. The above picture doesn’t looks like Photoshop trickery. If this thing is coming, Personally, I’m not the one who will be the biggest fan of it, rather the chopped Indigo CS looks much better. Renault has almost removed the boot so nor it can be called a sedan neither a notchback! Anyways, This was my thought from rear angle, maybe the opinion would differ after viewing from side? It would have been much better if they released the new model for which we were waiting from sometime now.

Yes i believe, since Logan is not working for them, they should bring some newer car. They have so much to offer.

It doesn look like a PS to my eyes! But what is the use without the boot now , i would prefer a Swift or other Hatches instead!!

a competition to indigo CS? i think mahindra is burning out of jealousy seeing the indigoCS sell like hot dogs. so may be a try by them too? it surely is not s PS job.

It surely is a Photoshop job. Look how odd it is. The rear bumper is clean and shiny, whereas the rest of the car is covered in dust! A keen eye will surely spot the difference.
A

amaan the rear bumper is not at all clean. its because of the shade that it appears so.
You must log in or register to reply here.