sacbiker said:
Sharing links to useful documents below which are not easily obtainable.

Click to expand...
I found this PDF which has the MRP of almost all parts for our bikes. Many of these are multiplied by a factor of 2 or 3 but it gives a ball park idea of what the prices are

JingalalaHoe said:
I found this PDF which has the MRP of almost all parts for our bikes. Many of these are multiplied by a factor of 2 or 3 but it gives a ball park idea of what the prices are

sacbiker said:
Check out this website. It has the price list of all Bajaj and KTM parts.
Click to expand...
This site has the same problem as the PDF I referred to with the MRP being in multiples.

The most accurate is to check in 99RPM for any parts common with bajaj. If the parts are KTM specific, I consult the PDF and take a guess what the price will be.

Its better to change the coolant at every 10k kms and change the brake fluid with every brake pad change.

sacbiker said:
Thank you for explaining. As it runs out, it is so much easier to replace the friction plates alone on this bike. I am double-minded on whether to just do that or to replace the entire clutch assy.
If it is the whole assembly replacement, I am more leaned to find a skillful shop and get it done there rather than making it into a DIY. I believe, hands-on experience matters for some jobs even if it looks so easy.
Click to expand...
That would work but the thumb rule to follow is to replace both the friction and steel plates together. Cause if by chance the steel plates are out of spec then it would cause your clutch to prematurely give away.
Plus they do not cost much to begin, here's a snap of new vs about ~50k km's old clutch plates on my CT100B, as you can see my steel plates are really burnt and beat out of shape; 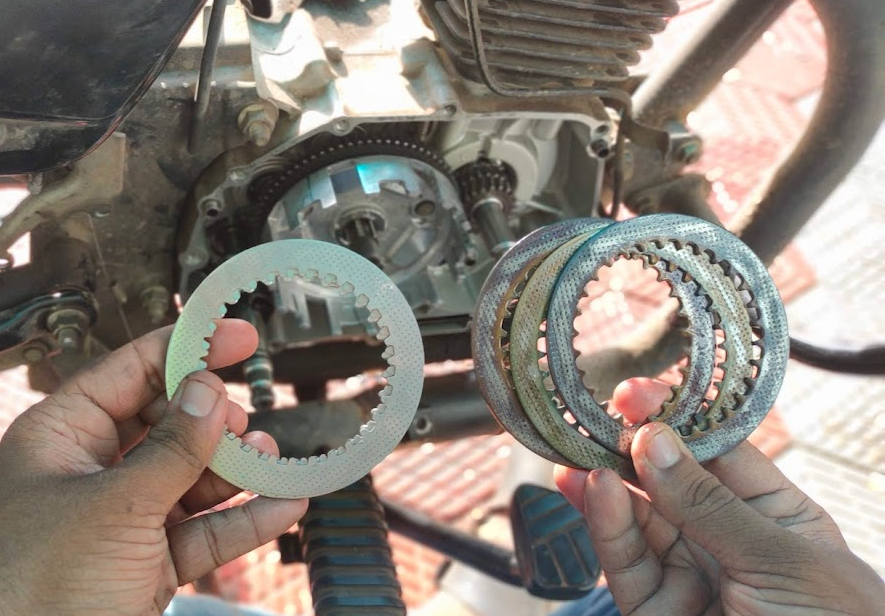 Now you could let the center hub and basket be if they do not have grooves, if they do then it would make sense to have it replaced. There are jugads done to extend life but they're not worth it, plus it is an aluminum part.
Notice grooves in my P220's hub; 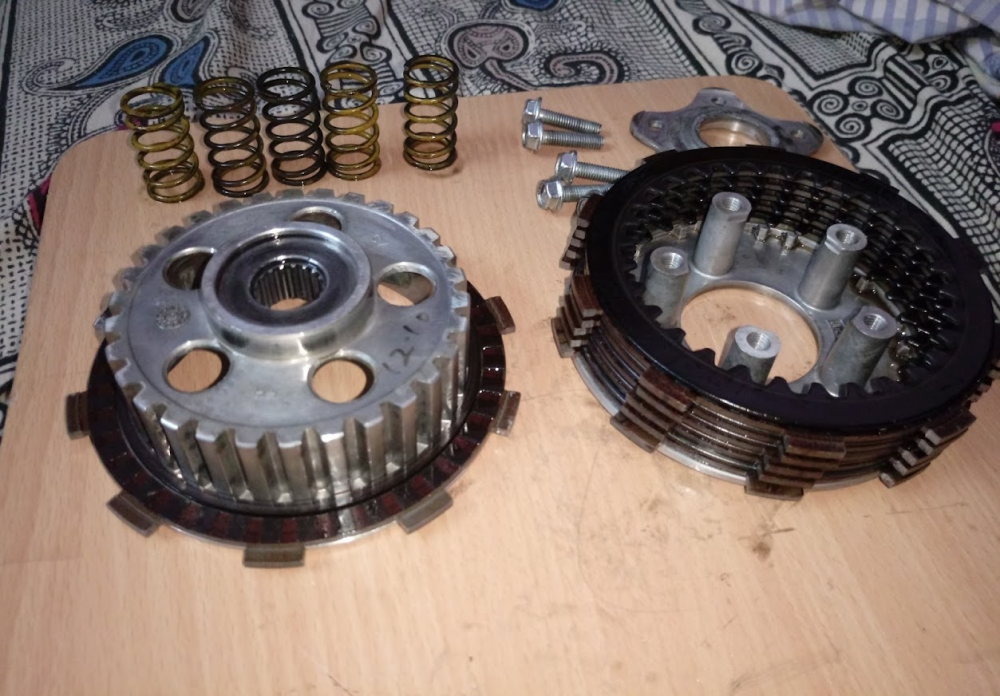 The basket also had noticeable grooves but I for the love of me cannot find that pic.

Not sure about KTM but for Bajaj they do sell the entire clutch as a kit, basically pull the old one out and put the new one in, so had gone for it when I'd changed clutch on my P220 at around ~50k on the odo; 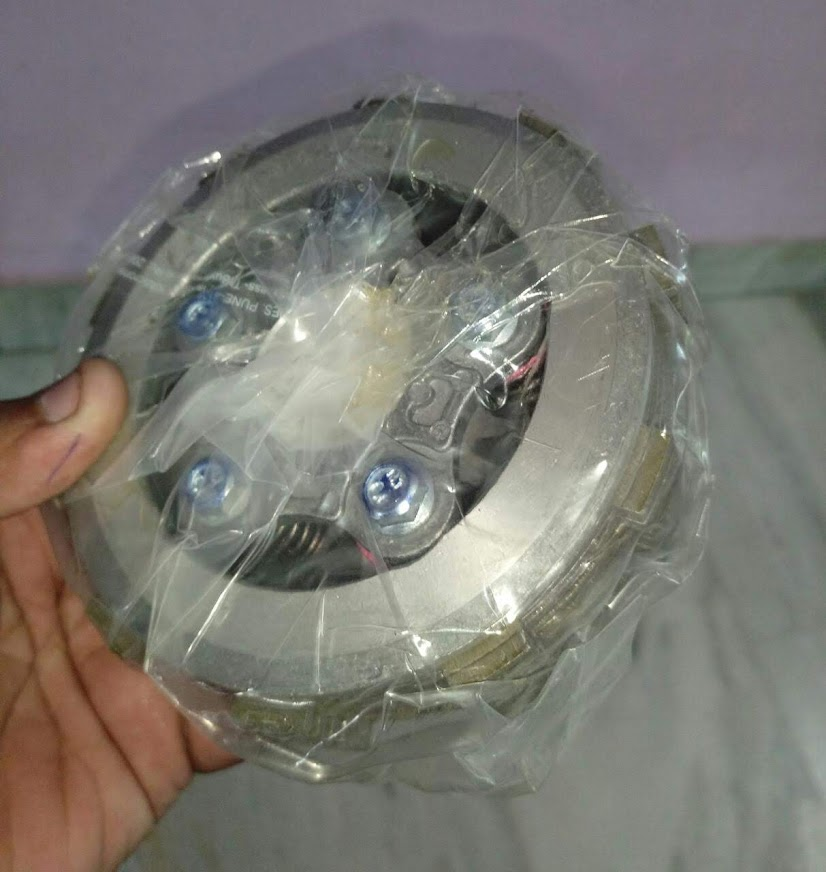 If you do notice any groves on your hub then it is best to get such a kit if KTM does provide the same. It would cost a bit more but the peace of mind on offer would definitely be worth it.

HI,
390 is one of the great motorcycles.
Light weight, Super Braking, Power Power Power. Taking the curves is confident inspiring.

But People Stamped the motorcycle with bad impressions because of some riders doing good speeds in crowded places, cities, and doing wheeling in public roads.

DEViANCE said:
If you do notice any groves on your hub then it is best to get such a kit if KTM does provide the same. It would cost a bit more but the peace of mind on offer would definitely be worth it.
Ride Safe!
Click to expand...
Thanks. I don't have the required tools to replace the hub. So, I have decided to give the bike to a professional and have him inspect the hub. Will change the whole clutch if it needs to be changed.
Interestingly, something else I noticed is that the clutch slips a lot more when the engine is relatively cold. After the bike has fully warmed up, it barely slips.

Ambylovers said:
But People Stamped the motorcycle with bad impressions because of some riders doing good speeds in crowded places, cities, and doing wheeling in public roads.
Click to expand...
I can 100% agree with this. This bike and its orange color have become the sign on squid and chapri riders everywhere. TBH, at times I really feel embarrassed when people eye me as one of those kinds.
I think this phenomenon is worldwide. For example, in the US, gixxer and busa riders seem similar. And for cars, Mustang and Charger drivers!
The point is that, when there is affordable performance on sale, people from all walks of life tend to get attracted to it. Especially when used ones are available for an even cheaper price.
Last edited: Oct 12, 2022

sacbiker said:
Planning to do that the next weekend along with the ABS diagnosis.
Click to expand...
There has been a lot happening lately with KTMs in our circle.
My Duke 390 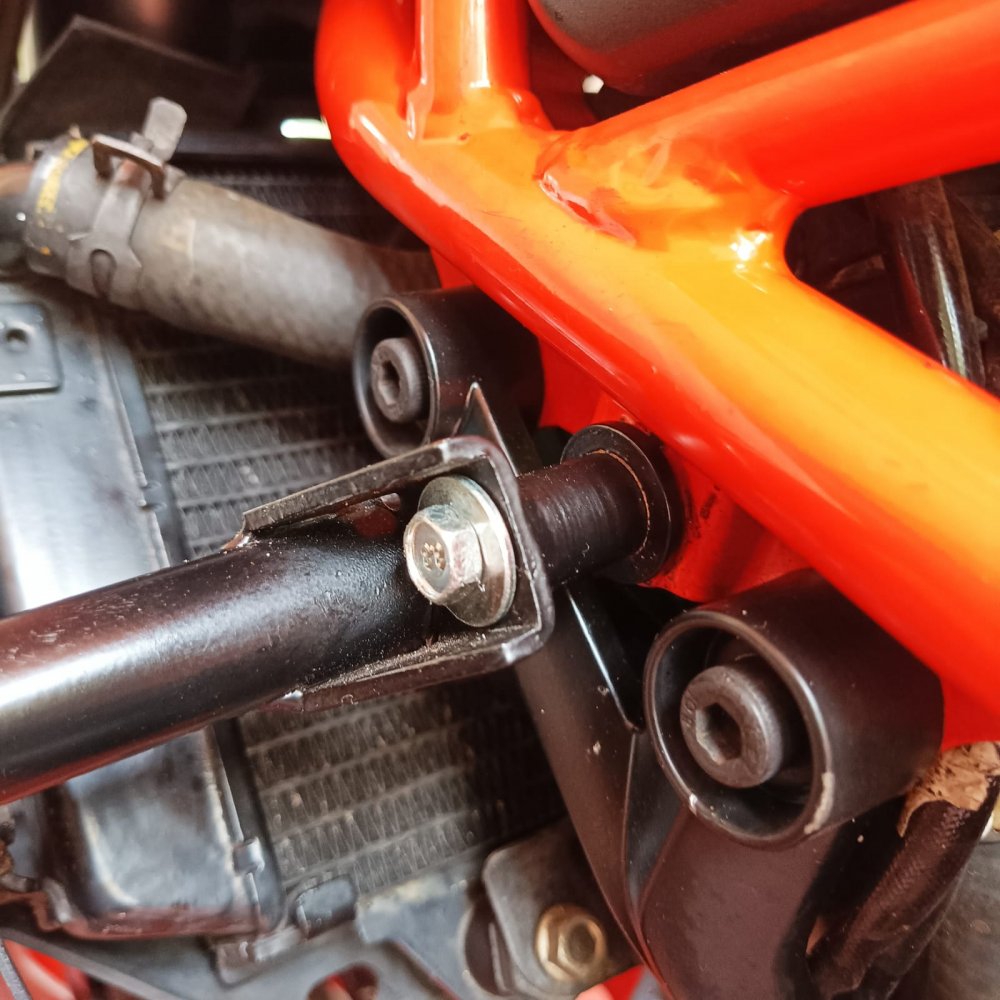 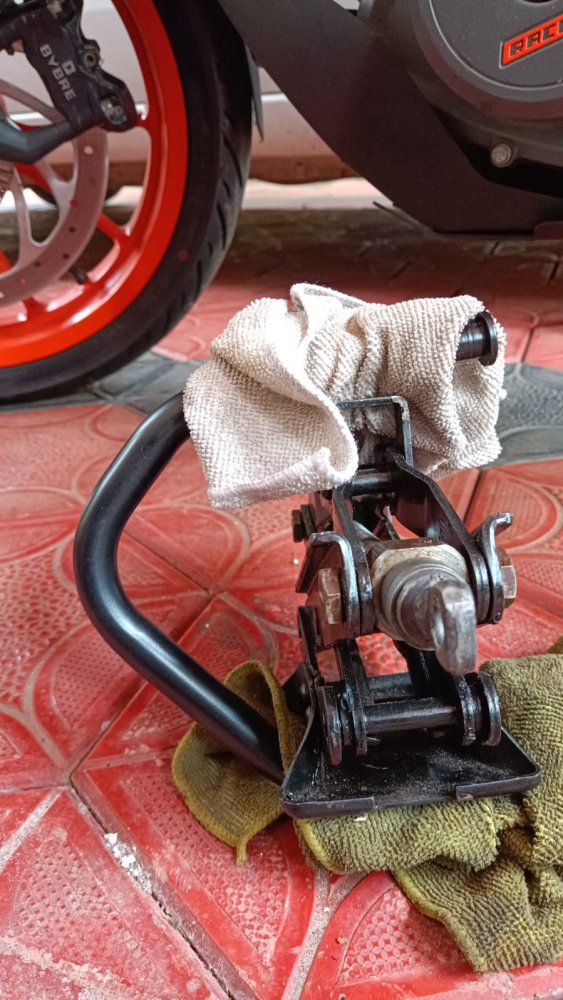 While fitting the crash guard, I saw the radiator bleeding screw of the bike and thought to loosen it slightly and see if there was any air in the system. I have never opened this before in my life even while changing the coolant.
I only came to know about this bleeding screw recently when I was reading the workshop manual before I changed the coolant in my friend's RC390.
After I loosened it and the coolant started dripping out, I tried to close it. Lo and behold it keeps on spinning forever. There was barely any thread in it. I was dumbstruck by this!
How in the world can this happen? I was so disappointed in myself that I touched it! 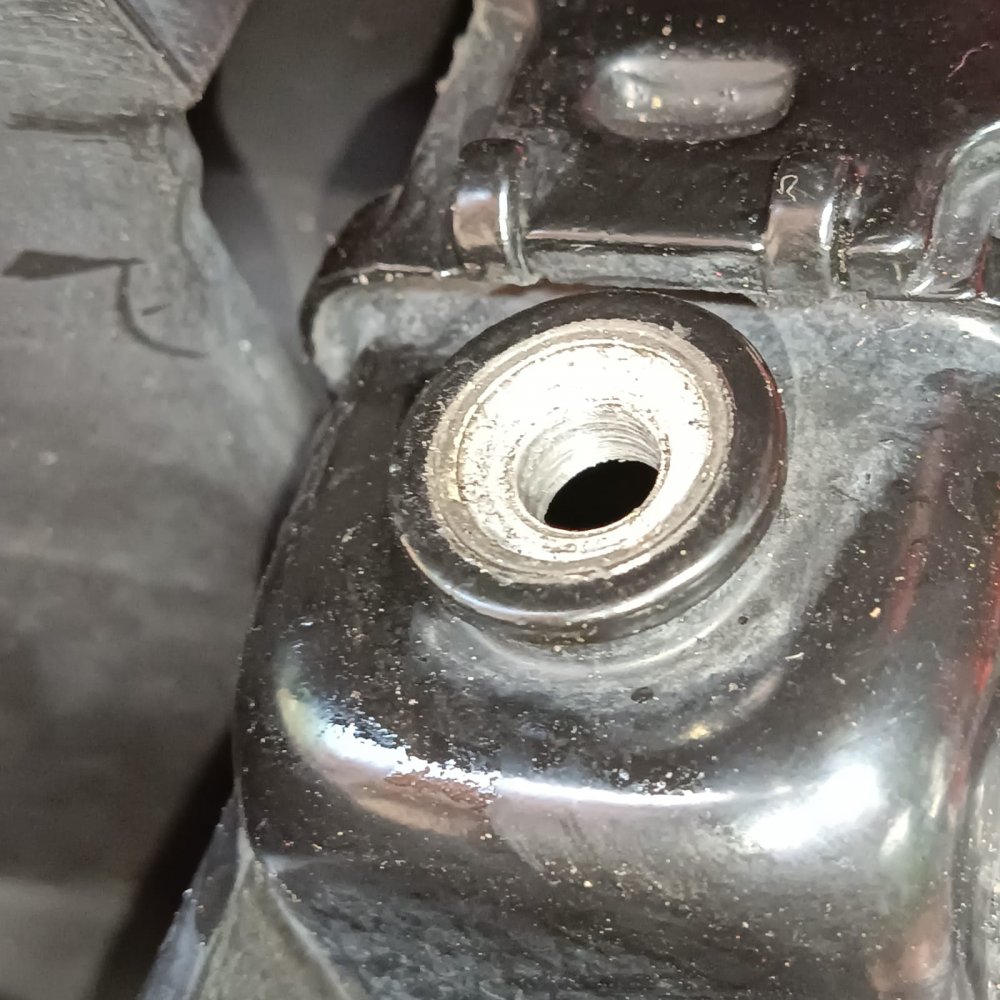 There have been similar cases reported before in various forums where the radiator came stripped like this supposedly from the factory!
I can say that this was the reason for the 6-month long coolant disappearing scandal in my bike while I got it!
With common sense, anyone can put one and one together and come to the conclusion that the coolant was in fact leaking through the faulty bleeding screw thread all along!
I believe they even found this out and did some jugaad to stop the leak since they were not ready to accept that the radiator bleed screw was stripped since they thought the KTM service center would be blamed for it.
The fix is to use some rethreading tool to rethread it to the next size or to get a new radiator for about 4K.
For now, I was able to put it back with some Teflon tape and it has been holding well. But this is definitely not a fix and only first aid. 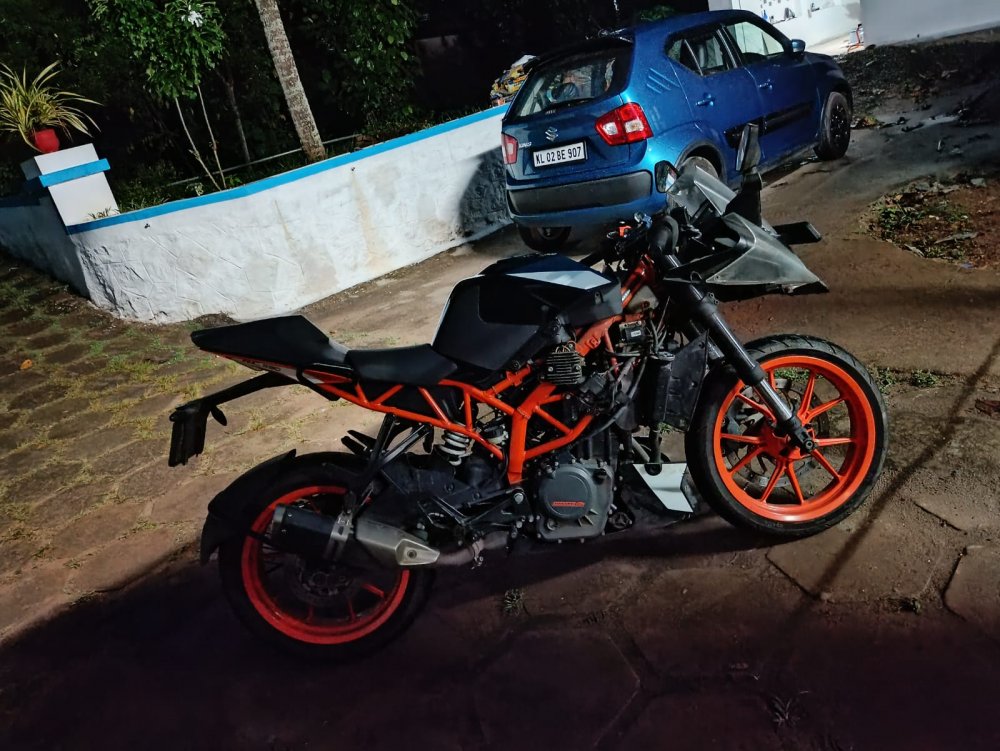 After the coolant change in the RC390, my friend reported some burning smell. Turned out to be the drain tube from the EVAP canister that was rubbing with the exhaust.
There was supposed to be a clip in the fairing to hold it. But that clip was disappearing from the fairing(fallen off?). So, we never tucked it in anywhere.
This resulted in the tube getting burnt. Tried to get a replacement from the service center and as usual, it was not in stock.
Cut off the burnt part (and about 20mL of petrol fell down) and tied it to the frame with a zip tie away from the exhaust.
I have no idea why KTM would put a fuel drain line right over the red-hot exhaust! In my Duke 390, this is situated at the right side tank cover, far from the exhaust.

Once that was done, I went on to bleed the brake fluid of the RC390. Both front and rear were bled. There were some black particles in the rear old brake fluid. 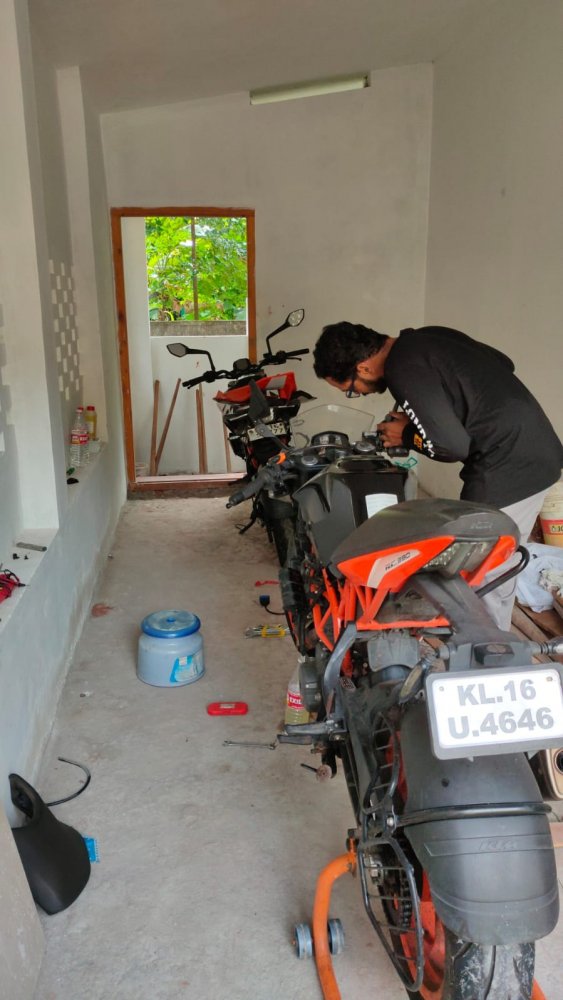 As for the 'ABS Failure' error in the speedo, the OBD scanner returned no errors.
All fuses were OK.
Lifted the front wheel of the bike off the floor and spun it. The speedo was showing 0. The rear wheel spin was showing speed in the speedo.
Swapped the speed sensor from another Husqvarna Svartpilen 250 which belongs to a friend(since I did not have my bike at that time). And ABS was working fine.

The RC390 also never wanted to go into the 1st gear. The friend with the Husqvarna Svartpilen (who also has a Duke 200, he rebuilt the whole engine himself) was able to adjust the shifter linkage of the RC390 and solve the issue.
The rear right indicator is also broken which needs replacement.
Duke 250
There was also a Duke 250 in the house which belonged to his brother and had miss firings at times.
Scanned it with the OBD. 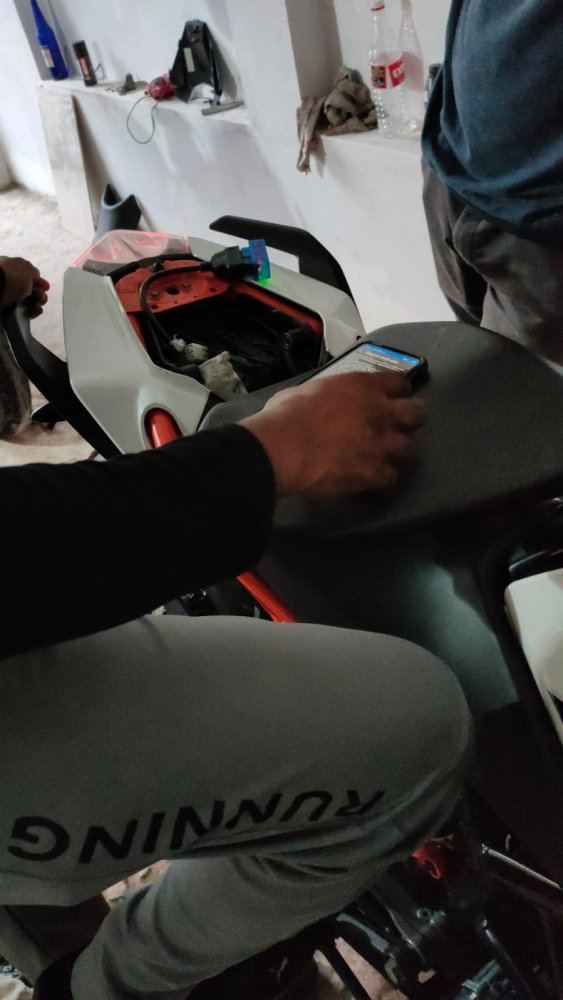 Got the following error code. 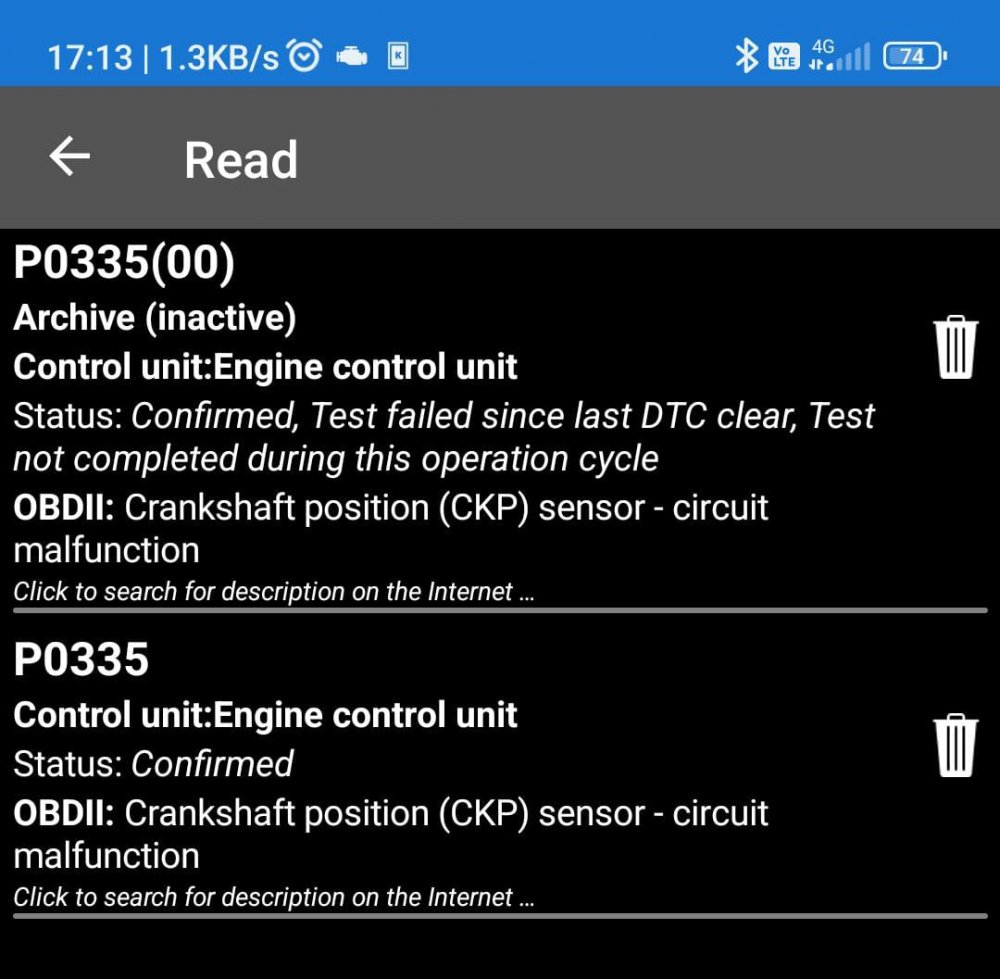 It is pretty self-explanatory. The sensor might have gone bad or some issue with wiring and the vehicle is not able to identify the Crankshaft's position.
Since checking and replacing this sensor was outside my technical skill as the left side engine cover had to be opened to access the sensor, decided to stop the diagnosis at this point.
Would have probably opened it if it was my own bike.

(I accidentally closed the tab while typing this at this point, but whatever I had written was autosaved. Thanks to the developer who made this feature!)

Went on to flush the brake fluid of the D250, was easier since it did not have ABS and the new fluid came out through the bleeding screw so much faster. 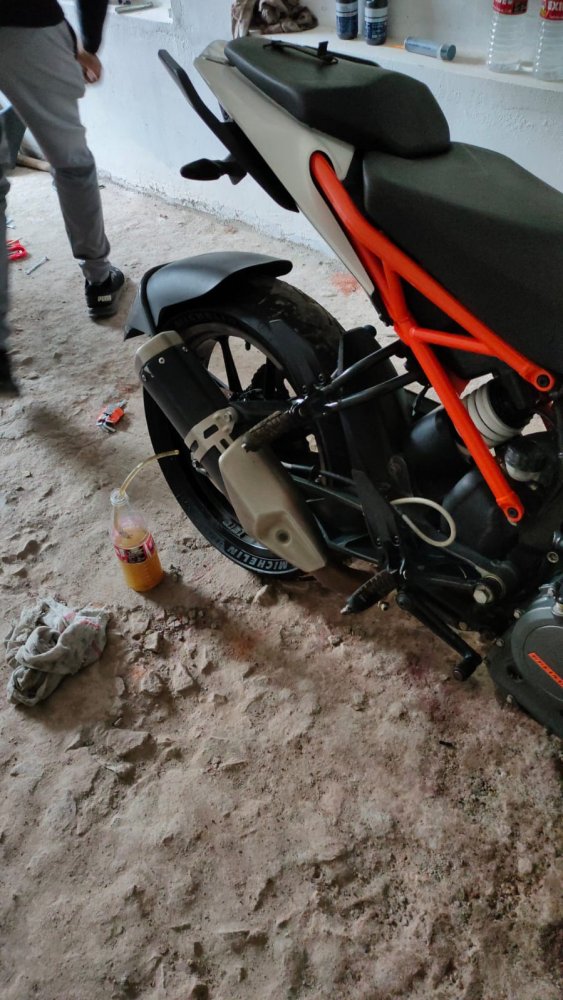 Duke 200
Another Duke 200 friend who was present there was so furious about the bill he got for giving his bike to a superbike service center in Trivandrum. 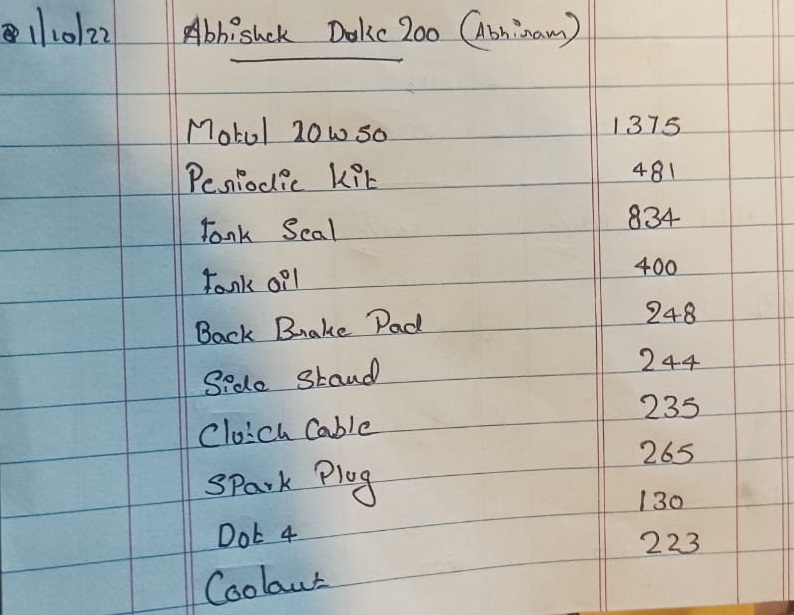 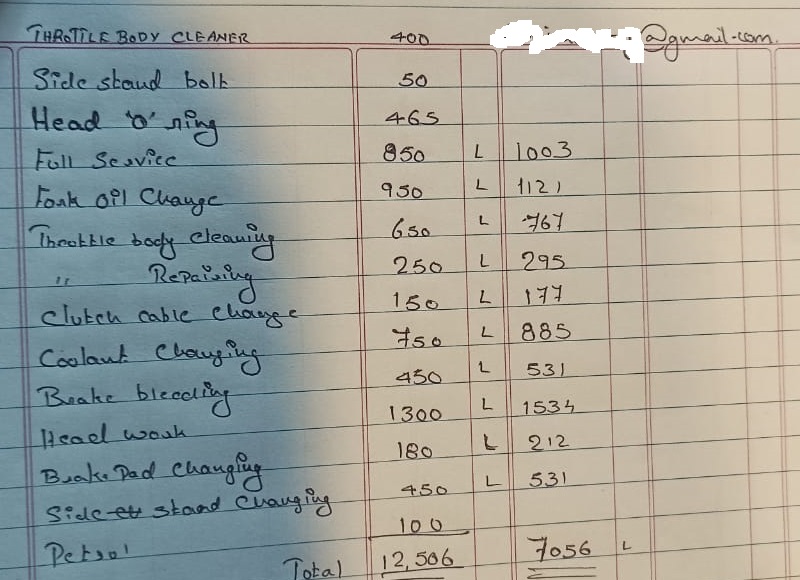 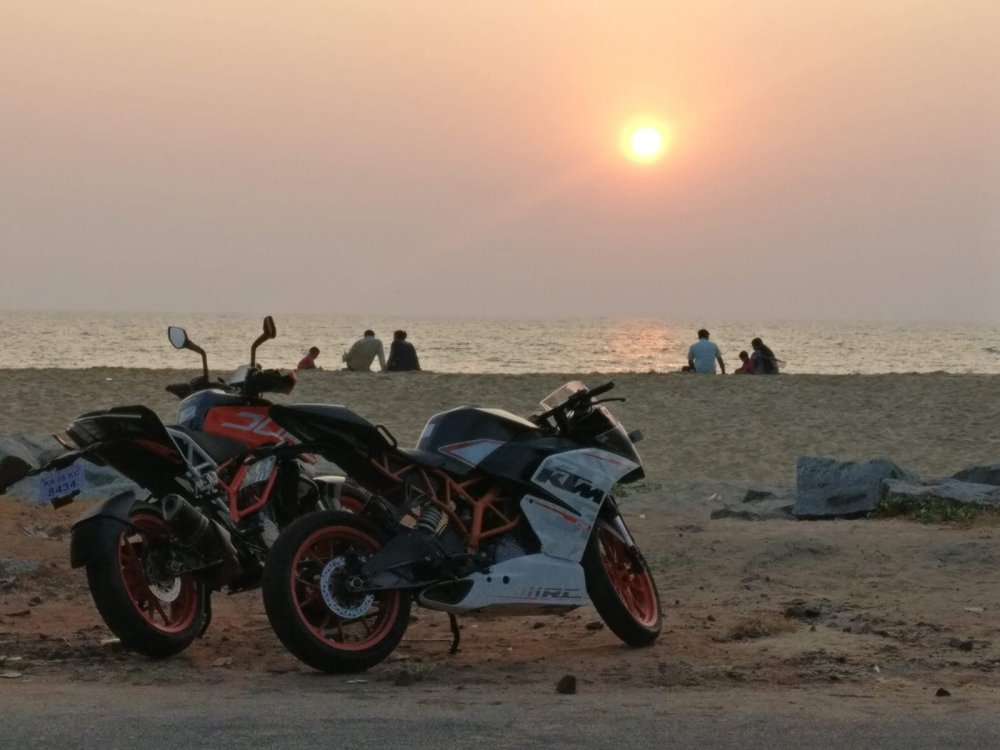 Another friend with a BS3 first gen RC390 is planning to sell it now. The bike has not been used for several years as he is working abroad.
I have to make that bike in a sellable condition soon. Will update you about that as well on this thread since all these are essentially the same bike!

Why do we do it?
Why do we put on with all these headaches and still own these bikes?
For moments like this.
A short ride to Vellanikal Hill. 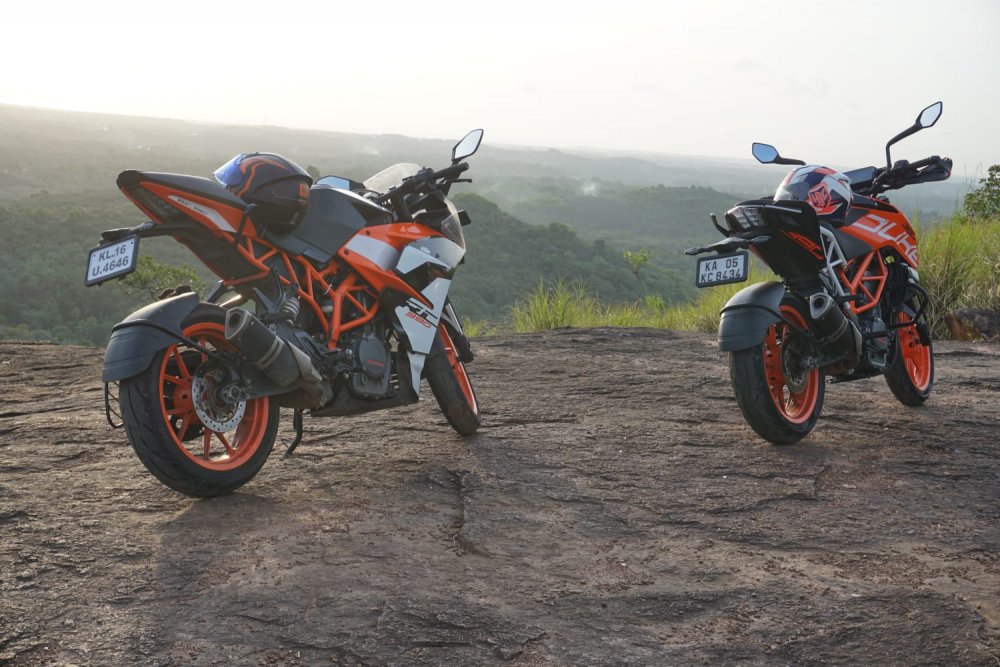 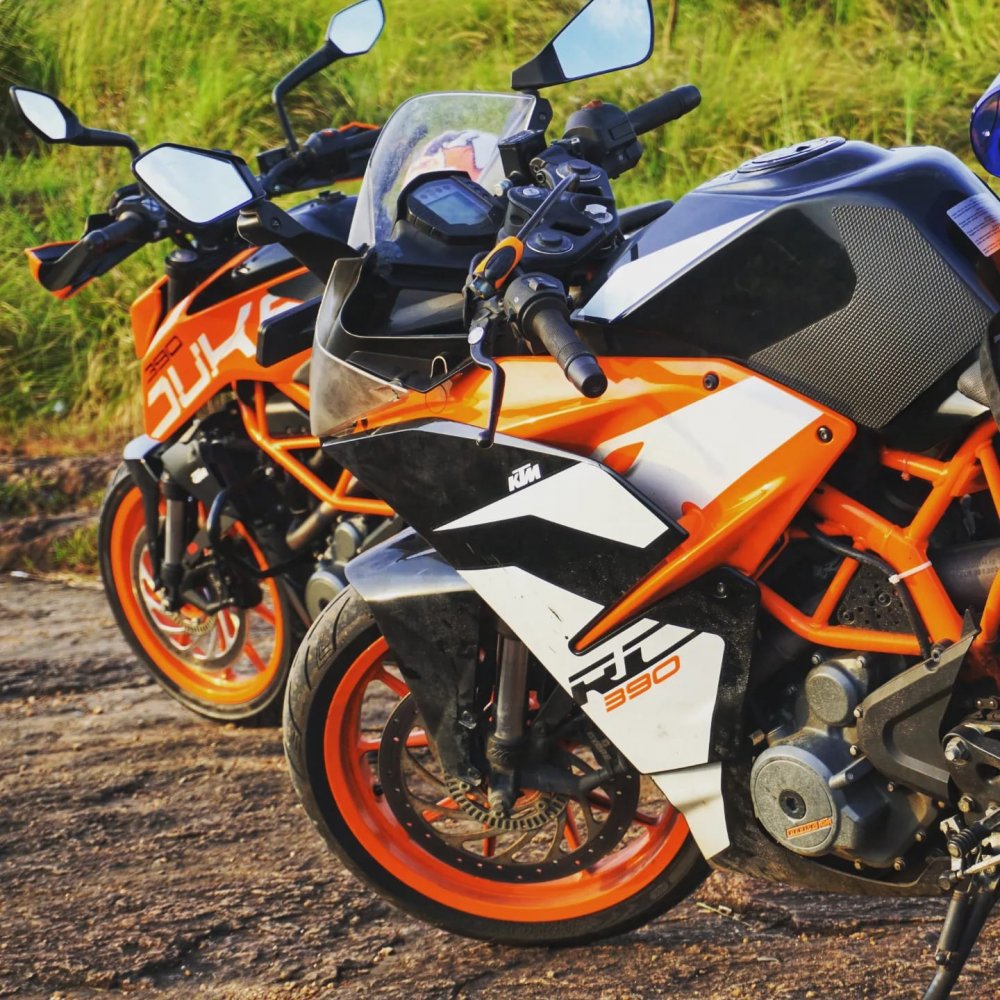 17 years of friendship which started from the 5th standard. We have lived in different cities since. But the common passion for motorcycles has kept us connected till now while I don't even know anyone else from school now. Both of us started out in FZ, rebored it to 180cc and blew both engines.

. We started to dream for a 390 from 2013 when it was first launched. We were able to get ours in 2017 and 2018. Currently, intentionally delaying superbike plans till the roads are in a better shape.
Last edited by a moderator: Oct 14, 2022
You must log in or register to reply here.