Friends,
I drove back to Calcutta, after visiting Satkosia, Sambalpur and Talcher. NH-6 is indeed nice in Orissa and with little traffic and breathtaking views, driving was a pleasure. I was the lone driver in my seven year old car (Tata Indigo-GLX/MPFI, 70000+ KM), accompanied by wife and eleven year old daughter. The only problem which I faced in Orissa was innumerable speed-breakers. Any settlement, either big or small, invariably has at least two (mostly three or even more) such speed breakers and you have to always look out for them.
On my journey from Calcutta went via NH-60/NH-5, taking the Baleswar route, with which I was much familiar. But while returning was little adventurous and opted for this road, as not been in this section for many years and the scenic beauties of this road is really memorable. Here is a picture of me and my daughter, just after starting our journey from Talcher. 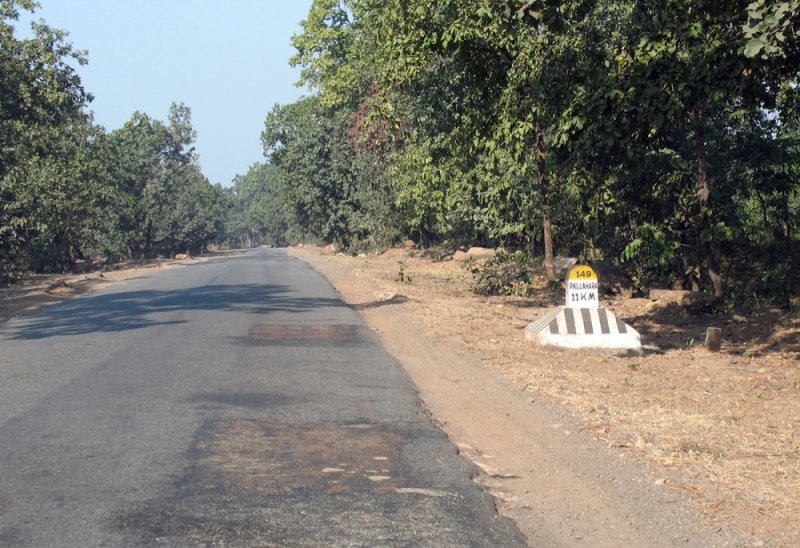 Traffic was sometime little heavy but mostly the going was smooth. Just asked my wife and daughter, whoever was sitting in the front seat to look out for the speed breakers, whenever came across any any village or town. 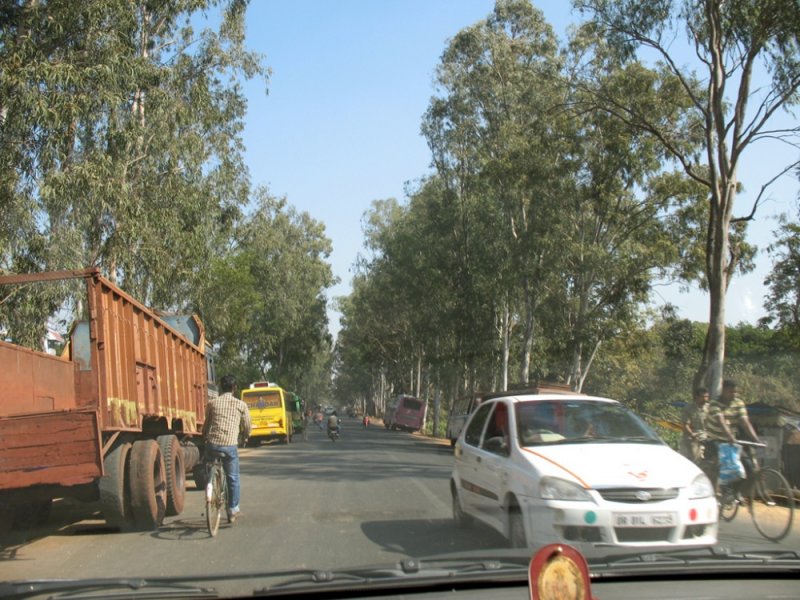 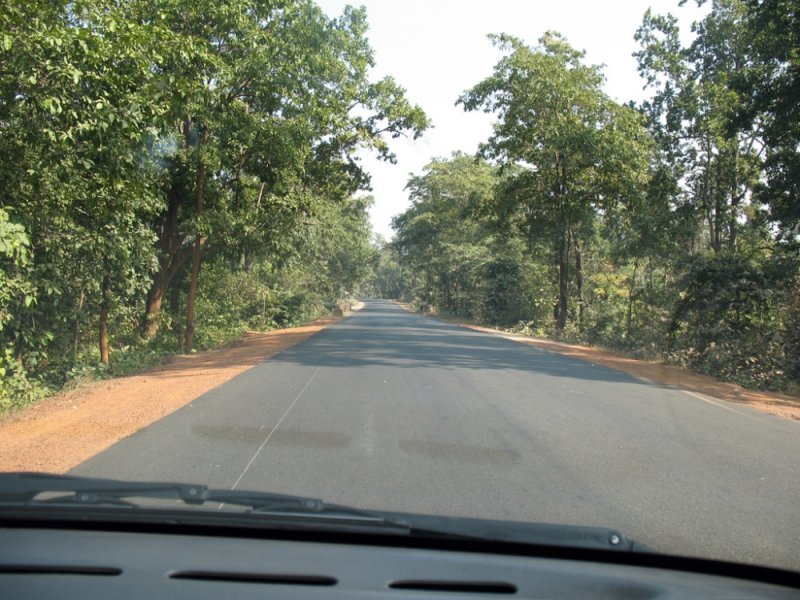 On way to Keonjhar, there is a place known as Kanjipani Ghat, a hilly terrain with dense forest, where the road is bad for four or five KM. But repair work is going on and it is very much manageable, with careful and slow driving. 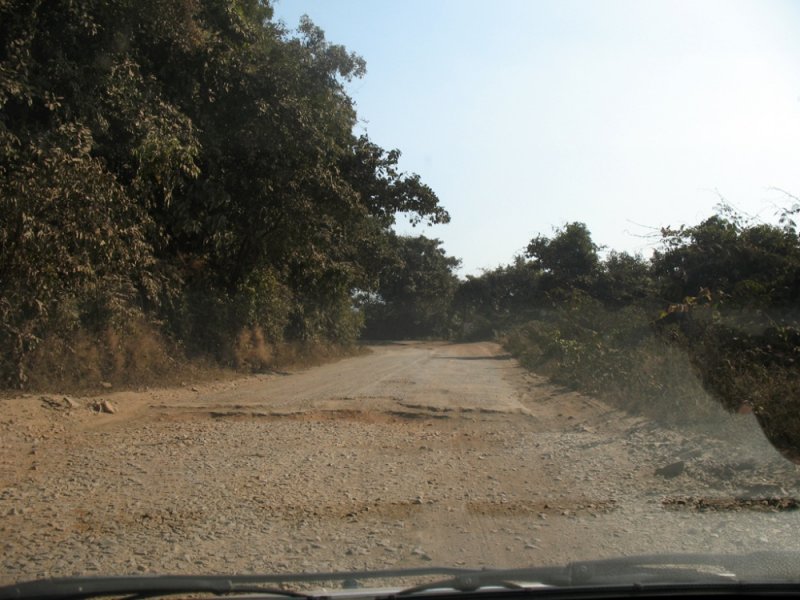 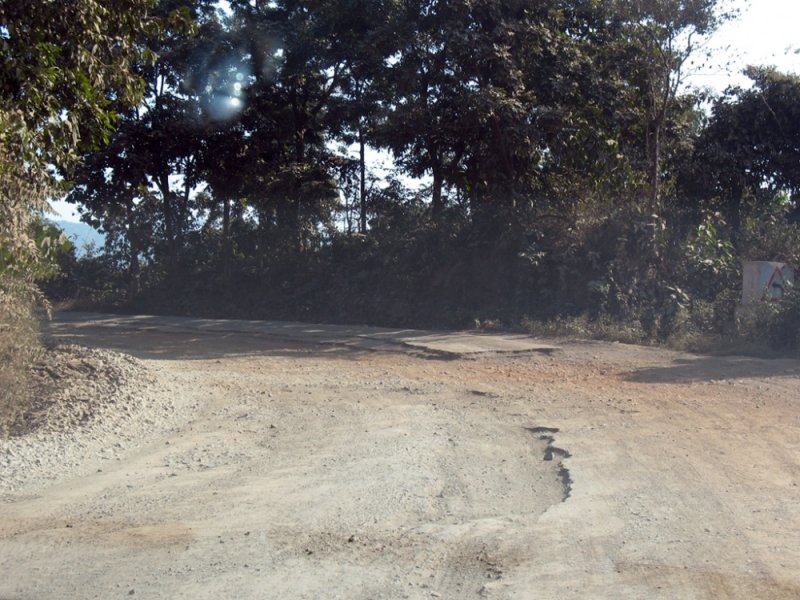 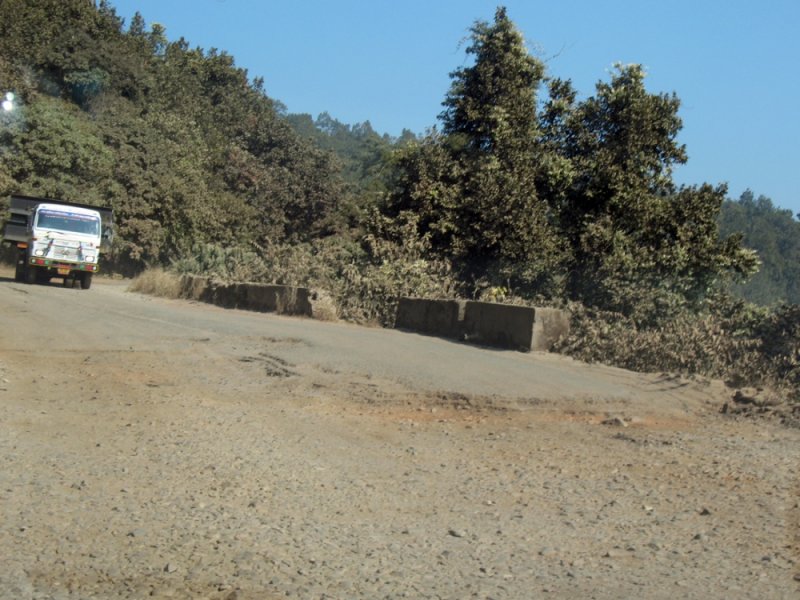 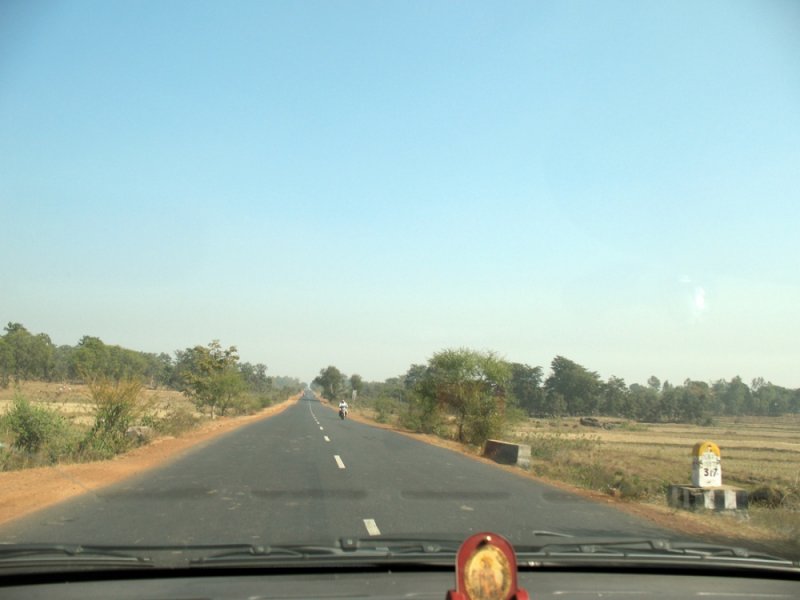 At a place between Jashipur and Bisoi. 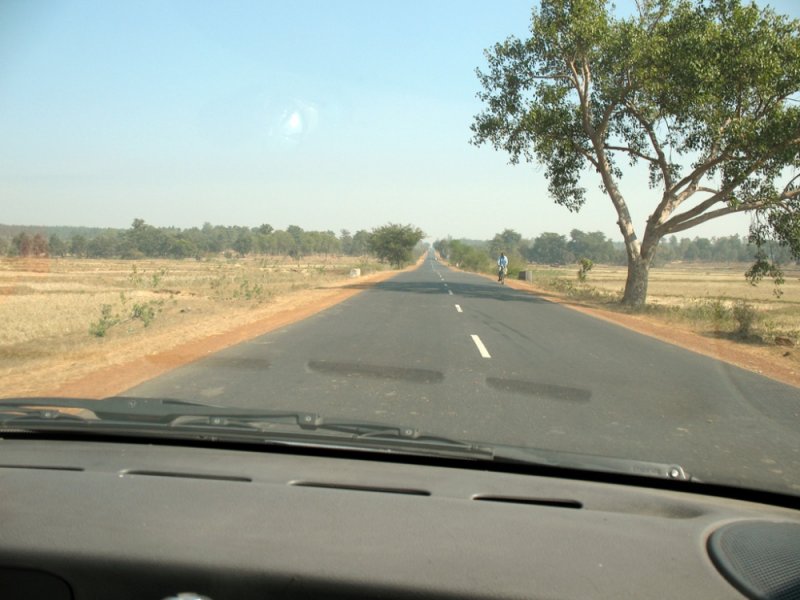 I was progressing well and was even to hopeful that I should be able to reach Calcutta by evening. Unfortunately I did not know anything about the condition of this road in Jharkhand.
Just right from a place called Jharpokaria (where NH-5 originates), the road is in complete mess, for the total stretch in Jharkhand. Sometime you do not find any trace of a road and I think I have got an idea how the roads of Berlin possibly used to look like after heavy bombardment by the Allied air forces at the end of WW II. 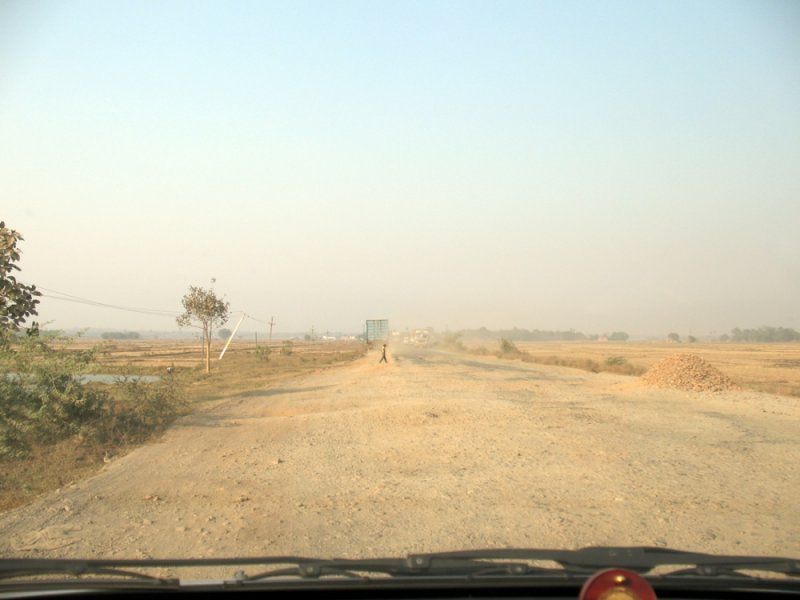 Please refrain from using this road in Jharkhand, unless you are driving a tractor. The deep potholes were difficult even for vehicles with higher ground clearance like trucks and buses to negotiate. I regret that I did not ask my daughter to take picture of a ten wheeler lorry full with sacks of potatoes lying toppled on one of it's side, trying to negotiate these huge craters, right in the middle of the road and creating a small traffic jam at this process.

I had no advance idea about such condition of the road. My car suffered many hits at the bottom, in spite of my best efforts to save it. Now the service center asks for replacing the rear part of the silencer pipe, which is deformed and cracked. I suggest anyone in this forum who is going to use NH-6 in Jharkhand in near future to drive to Gopiballabhpur Road and return to this road at Fekoghat. I also discovered that at present all local small personal vehicles are using this route. Although this is a longer route, you will be able to avoid the long line of trucks at Chichira border (between Jharkhand and West Bengal).
The road improved magically as soon as we entered West Bengal. Nice road, although the traffic was dense. And soon we were approaching Kharagpur. 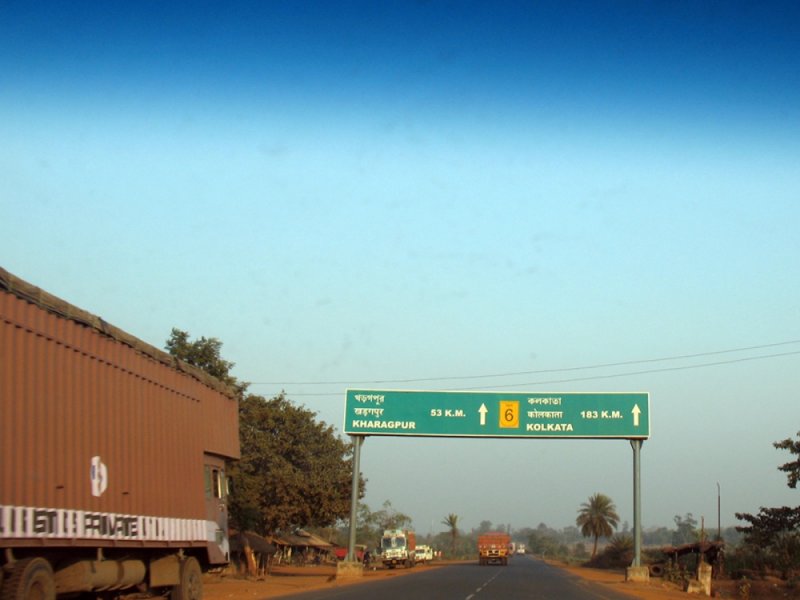 Nice pics rahul.. i have been to that stretch till baharagora and it was horrible...

@Rahul, Great trip but need a separate and more detailed T/L from you.

I probably will be in Angul next month for office work. Might check the Satkosia forest. So your inputs will be useful.

I have been on the Jharpokaria / Bangriposi stretch a few times. Roads were absent in some stretches in Jharkhand border.

@Anis, Hey man, start penning down your T/L before Rahul hijacks your thread

We travelled Calcutta-Choudwar-Angul-Sambalpur-Raipur-Bhilai-Nagpur-Dhulia-Bombay-Ahmedabad-Udaipur-Chittorgarh-Jaipur-Agra-Allahabad-Varanasi-Calcutta. The places mentioned in bold are the ones where we halted.Will put up the logs, pics etc once i settle down a bit :-).

Creating a new thread for my trip.
A

Mr Rahul can u tell us some more about satkosia. Like where to stay, how to book the accomodation and how is the place like. Some pictures of the place would be interesting.

ashis_525 said:
Rahul can u tell us some more about satkosia. Like where to stay, how to book the accomodation and how is the place like.
Click to expand...
Prior to my visit I collected all required information from the net. That time there was accommodation offered in tents, along with rooms in forest bungalow. Unfortunately the tents were all booked and I somehow did not like the forest bungalow. As I had a car at my disposal, I was thinking of staying at Angul town. But then a friend of mine who stayed at the nearby Talcher town arranged a marvelous accommodation for me in his company's guest house and I opted for it.

ashis_525 said:
Some pictures of the place would be interesting.
Click to expand...
I took several photos and shall upload some for you very shortly.
S

Planning to make the trip sometime next year with my wife and pet dog. Want to know if the same is doable. Thane to Nagpur (Day 1) Nagpur to Kolkata (Day 2) How are the roads and the time it will take to cover the distance? Anything else that I should be aware of or take necessary precautions??

Nagpur to Kolkata in one day? Too optimistic. So far I know, the road condition east of Raipur is pretty bad. IMHO, under the present condition of the road, Nagpur to Sambalpur will take at least twelve hours.
S

Still checking on all the possibilities as I still have quite a few months before the trip... till now relying on distance maps which shows Nagpur-Sambalpur stretch at 8 hrs and the entire trip to Kolkata at 16 hrs... I know its pushing it a bit but I tried looking up for a hotel for pets in Sambalpur but didn't find any so no matter the time may have to make a late entry into Kolkata I guess... How much time should the Mumbai Nagpur stretch take me??

Nagpur to Kolkata will take atleast 2 days. And road condition is bad. And since you're travelling with pet, you'll have to make additional stops for your pet, which will delay you further. Its stressful for your pet.
N

Going through the photos and details. Thanks! of much help for me to plan out. I request urgent guidance in helping me plan out a trip scheduled on the 24th Sep 2014 from Mumbai to Kol. My route plan is like below:

Please suggest which is the best route. I will be with my parents and in a Wagon R. We want to do the trip since our last trip Mumbai - Udaipur - Delhi - Agra - Gwalior -Indore - Nashik - Mumbai was memorable (barring the horrible road stretch between Gwalior and Indore). I would request a route which according to you has:

Thanks in advance. Will keep posted with photos and videos.
Nilav (nilav_maz@hotmail.com)

Nilav said:
I request urgent guidance in helping me plan out a trip scheduled on the 24th Sep 2014 from Mumbai to Kol. My route plan is like below:

Thank you rahul.I guess I will stick with your advice on route A. Though I am a bit worried of tarmac conditions and safety between Nagpur and sambalpur. But will be travelling only during tge day and not doing more than 100kmph top. So well should be interesting. Thanks again. But in case any further advice, will be highly grateful. Thanks!
E

want to do this trip from mumbai to kolkata via hyderabad and Visak, any inputs would be welcome,