Jaguar has announced that its new sports car will be called F-type and will make production in 2013 initially as a two-seat soft-top convertible.
it was previewed as the C-X16 concept at the Frankfurt motor show last September.Design director Ian Callum said the design would stay true to the C-X16 concept, making production with limited changes. 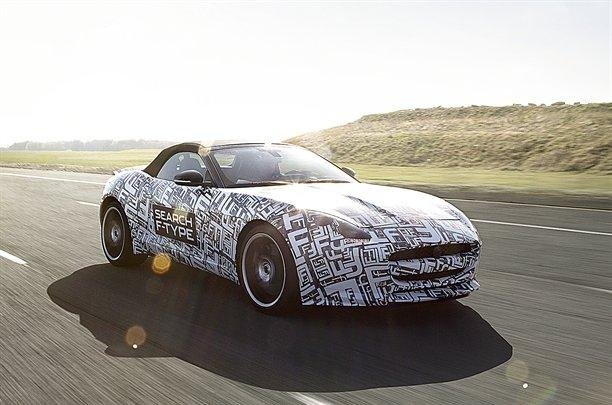 isnt that jag xkr ? my mate has one

Here comes rendering of F-Type roadster version.
please note that this image is not an official photo but just a rendering of how the roadstre would look like.
Source:
U Imagine: Jaguar C-X16 Rendered into the F-Type Roadster - Carscoop

codename47 said:
isnt that jag xkr ? my mate has one
Click to expand...
nah bro this is based on the CX-16 concept. its smaller and compact compared to the XKR.

type-r said:
nah bro this is based on the CX-16 concept. its smaller and compact compared to the XKR.
Click to expand...
yeah now i can see the above pictures gives better idea that camouflage wasn't too clear

Another fine rendering hits the web,Another blockbuster from JLR stable

Jaguar announced it's engine lineup for F-Type at the Beijing auto show.

Jaguar has revealed details of three new engines at the Beijing motor show, including a 375bhp supercharged V6 that will power the new Jaguar F-Type and a four-cylinder turbocharged petrol that will go on sale in the XJ and XF.
The F-Type’s 3.0 V6 engine will be unique to that car, in which installation it will reach peak power at 6500rpm, and an impressive peak torque output of 332lb ft between 1800rpm and 4000rpm. The XF and the XJ will get the same engine but in 335bhp tune and in conjunction with an eight-speed auto, replacing the 5.0 V8 currently available in those models. This is a key introduction for the Chinese market, which is likely to become JLR’s biggest market by the end of 2012.
The 2.0-litre turbocharged four-cylinder destined for the XJ is derived from the Evoque’s petrol engine. It will produce 238bhp at 5500rpm and 251lb ft between 1800 and 4000rpm and will replace the XF and XJ’s six-cylinder unit, with sales starting this summer.
Ralf Speth, CEO of JLR, told Autocar that, “we have to make sure that combustion engines are further refined, even if hybrid propulsion may be the only way to meet CO2 targets in the longer term.”
Speth was also adamant that “pure electricification doesn’t make sense at the moment. Not whilst we are still reliant on coal-fuelled power stations in some countries.”

Car Magazine caught Jaguar testing their F-Type Roadster, Till now we were only having some official images of camouflaged F-Type shown during the New York Auto Show.

F-Type is the first true sports car Jaguar is going to built after famous E-Type of sixties. Hence the name F-Type. “A convertible is much harder to engineer than a coupé, so we chose to develop the roadster version first” said Callum.

Earlier in April during the New York Motor Show, Jaguar has revealed the F-Type Sports Car. It was also revealed that it will be built at Castle Bromwich factory near Coventry, by investing around £200m.

Also few weeks back JLR has revealed the details of the powerplants which will come under the hood of F-Type. The new 3.0 Supercharged V6 powerplant producing 380bhp and 332lb/ft of torque along with 5.0 litre V8 supercharged lump, already used to great effect in the XFR, XJ Supersport and XKR, is to find its way under the bonnet of the F-Type.

It surely looks Super hot and like any other Jag I am in love with it. The history and the designs and that LOGO just take away my heart always.

YashD said:
It surely looks Super hot and like any other Jag I am in love with it. The history and the designs and that LOGO just take away my heart always.
Click to expand...
Even I feel the same way about Jag's. JLR want's this model to be their Halo car.

Yesterday Cars Magazine has spied the Jaguar F-Type. But the difference from earlier spyshots and this one is that this test car was having dual twin exhaust, compared to only one twin exhaust. In our view, this car should have 5.0L V8 Supercharged engine, which is already serving in XFR, XKR and XJR. So it must means that the Jaguar has already started working on the Jaguar F-Type R version. The F-Type roadster will arrive as early as Spring/Summer 2013, followed by F-Type Coupe in 2014.

This surely is an work of art,

As the official sponsor of the Clerkenwell Design Week that runs in London from May 22 to 24, Jaguar will have plenty to keep visitors entertained.
The highlight of the British firm's exhibition is the construction of a full size clay model of the C-X16 Concept sports coupe, with which Jaguar wants to divulge the artistry involved in sculpting cars.

"Jaguar is one of the most technologically advanced companies in the field of product development but we still believe in the sense of artistry," says Julian Thomson, Advanced Design Director at Jaguar Cars.

"Emotional connections are at the heart of our vehicles and the traditional process of working with clay with some of the best sculptors in the world allows us to refine them into the purest surfaces."

The clay model of the C-X16 study is joined by three bespoke sculptures based on the bonnets of an E-type, C-X16 and C-X75, while Jaguar is also display three models, the 1996 XJ13, and the new XFR and XKR-S sports cars.

CAR's new spy shots provide the clearest views yet of the Jagaur F-type's interior. The good news is it's very faithful to the original C-X16 concept car.

What can we deduce from these latest F-Type cabin pictures?

The production F-type's interior is dominated by a large central touchscreen for the infotainment and navigation systems, likely shared with other products in Jaguar Land Rover's range. The interface will operate the Meridian hi-fi seen fitted to the driver's door panel in these shots.

Underneath the screen we see three rotary heating and ventilation controls, the current popular arrangement for cilmate control, and preserved intact from the C-X16.

The F-type will shun Jaguar Land Rover's familiar rotary pop-up gear selector in favour of a BMW-style joystick control, with a Sport mode for manual ratio shifting clearly visible on the the selector face. Drivers will nudge the stick to the left for manual gear selection.

The mysterious toggle switch in front of the gear selector looks to be the same dynamic mode switch the C-X16 boasted, albeit relocated from the side of the centre console. A chequered flag emblem is just visible, suggesting this control will be in charge of slecting less assisted, more aggressive driving modes tailored for road or track, akin to Ferrari's famous steering wheel manettino switch. Make no mistake, the F-type is gunning for serious sports car status, rather than wafty old Jag territory.

Meanwhile, the dished steering wheel also looks to be a C-X16 carry-over item, showing a flat-bottomed design and suede-covered surface.