Honda Cars India To Hike Prices Across Range From August 2021

Honda Cars India plans to increase the prices of its entire model range effective from August 2021. As reported by PTI, the Japanese automaker has cited an increase in input cost as the primary reason for the price hike. The carmaker looks to offset the impact of a sharp increase in the procurement cost of various essential commodities like steel and precious metals. However, the company hasn't revealed the quantum of the hike, which is expected to vary from model to model.

Tata Motors, the home-grown automaker, today announced its plan to increase prices across its passenger vehicle line-up. As of now, the company has not revealed the timeline or the quantum of the price hike on cars, however, Tata did mention that the increase in prices is due to the steep climb in overall input costs. Tata has said that the formal announcement about the quantum of price increase is likely to be made within the forthcoming days or weeks. We expect the new prices to come into effect from August 1, 2021.

Maruti Suzuki Increases Price Of Swift And All CNG Models By Up To ₹ 15,000

Maruti Suzuki India, via a regulatory filing, has announced that it will be increasing prices for the Swift hatchback and its entire CNG model line-up by up to ₹ 15,000. The carmaker, in its Bombay Stock Exchange (BSE) filing, said that the new prices will come into effect from today, July 12, 2021, stating that the price hike is mainly due to the increase in various input costs. The company also plans to increase the price of other petrol models in its line-up, and an announcement regarding that is expected to be released soon.

Tata Motors will increase passenger vehicle prices on an average of 0.8% depending on variant and model w.e.f 3rd August 2021.

350Z said:
Tata Motors will increase passenger vehicle prices on an average of 0.8% depending on variant and model w.e.f 3rd August 2021.
Click to expand...
In addition to this:

Continuing with its commitment towards customers, and acknowledging the faith and confidence they have reposed in Tata Motors’ New Forever range, the company will offer protection from the price increase to vehicles that will be retailed on or before 31st August’21. For the wellbeing of its business and supporting ecosystem, Tata Motors had recently announced that it has set in motion a comprehensive ‘Business Agility Plan’ to protect and serve the interests of its customers, dealers and suppliers.

Volkswagen will increase price of Polo & Vento by 3% and 2% respectively depending upon variant w.e.f 1st September 2021. This price hike is not applicable on Polo GT range.

Maruti Suzuki Hikes Prices By 1.9 Per Cent On Select Models

Last month Maruti Suzuki had announced increasing ex-showroom prices across its model range from September 2021, but now the carmaker has decided to increase prices only on select models. Maruti Suzuki has increased prices by 1.9 per cent on select models effective September 6, 2021. The company has cited rise in input costs as the reason for the imminent price hike. The increase was already expected as earlier in June 2021 Maruti Suzuki had already announced that it will be increasing prices in the second-quarter (Q2) of FY 2021-22.

Tata Motors will hike prices of its commercial vehicles in the range of 2% depending on model and variant w.e.f 1st October 2021.

Toyota Kirloskar will increase the prices of its models w.e.f 1st October 2021. The amount or percentage isn’t clarified in the press statement.

Citroen C5 Aircross Prices Hiked By Up To ₹ 1.4 Lakh 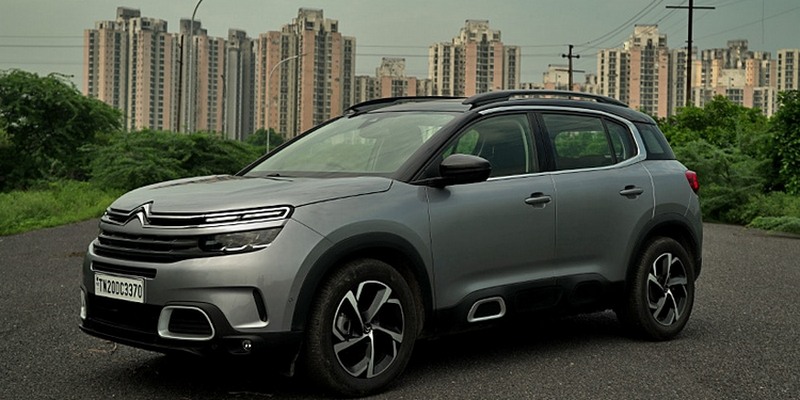 Citroen India entered into the competitive Indian car market with the launch of the C5 Aircross SUV that happened earlier this year. The French carmaker has silently made an upward revision in the prices of the mid-size SUV by up to ₹ 1.40 lakh. The SUV went on sale in the country with prices starting at ₹ 29.90 lakh for the Feel (mono-tone) variant. The dual-tone variant of the Feel trim was priced at ₹ 30.40 lakh. The top-spec Shine variant was introduced at ₹ 31.90 lakh (all prices ex-showroom Delhi). 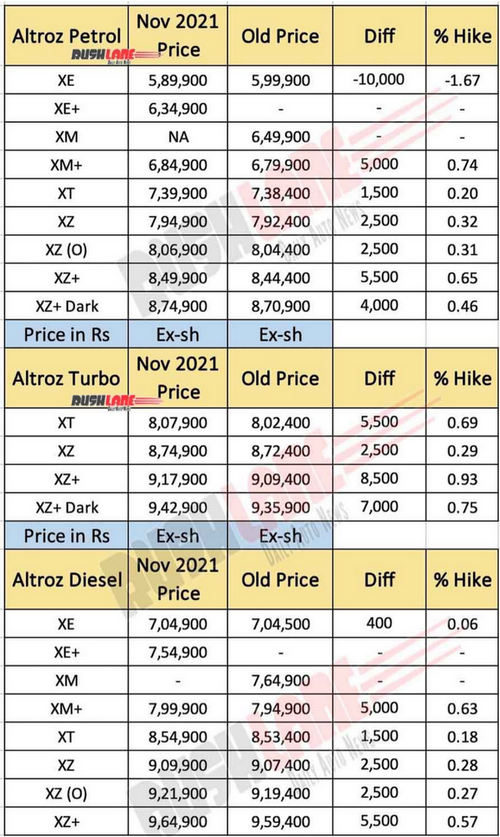 Skoda Auto India has silently increased the price of the Kushaq base variant by ₹ 29,000. The compact SUV is now priced from ₹ 10.79 lakh (ex-showroom), according to the company's website. Expect from the base Active 1.0L TSI MT model, prices for the remaining variants remain unchanged. The SUV was launched in the country in June 2021 at an asking price of ₹ 10.50 lakh (all prices, ex-showroom India). Skoda offers the Kushaq SUV in seven variants across three trims - Active, Ambition and Style.

Volkswagen Passenger Cars India has hiked prices across its India-made cars including the Polo, Vento, and the recently launched Taigun compact SUV. All models have seen a price hike of up to ₹ 5,000 across the range and the new prices came into effect from November 15, 2021, the company said in a statement. Volkswagen India also said that the price increase was a result of the rising input costs. Interestingly, it's not just VW models but Skoda has silently hiked prices on the new Kushaq as well. However, only the base variant on the Kushaq has seen a price increase. VW India previously hiked prices on the Polo and Vento as early as September this year.

Tata has hiked prices of the Nexon compact SUV by up to Rs 11,000 depending on the variant. Prices for the updated SUV now range from Rs 7.30 lakh-13.35 lakh, ex-showroom. Additionally, in going with our report from June, Tata has also dropped select variants from the SUV’s line-up.