HMIL, the rival of MSIL is reaching close day by day. Hyundai has set a new height by exporting 10 lakh cars. Hyundai is not only sucessful in India, But also made its Global presence.

HW Park, managing director & CEO, HMIL said, “Reaching the 10 lakh export car landmark is not only a significant milestone but also a matter of great pride for the Hyundai family as it showcases the global success story that Hyundai as a brand enjoys.” He also flagged off the one millionth car from the Chennai Port Trust in Chennai.

HMIL began exporting cars in 1999 when it shipped a batch of 20 Santro’s to Nepal and it reached the first milestone of exporting 100,000 cars in four years and ten months in October, 2004. In October, 2005 it exported its 200,000th car followed by its 300,000th car and 400,000th car in October, 2006 and August, 2007 respectively. By exporting the 500,000th car in March, 2008, HMIL had become the fastest Indian passenger car manufacturer to achieve this milestone. In a little over a decade since Hyundai has been present in India it has become the leading exporter of passenger cars with a market share of 66% of the total exports of passenger cars from India making it a significant contributor to the Indian automobile industry.

The company has also started exporting cars to Australia and is the only manufacturer to do so in such a short span of a decade presence.
Currently, Hyundai Motor India is exporting four of its popular models namely - Santro, i10, i20 and Accent to 110 countries. In 2009, in spite of a global slowdown, Hyundai Motor India’s exports grew by 10.7%. In 2010 Hyundai plans to add 10 new markets with Australia being the latest entrant to the list. The first shipment to Australia is of 500 units of the i20 and the total i20 export to Australia is expected to be in the region of 15,000 per annum.

In 2008, Hyundai witnessed the fastest exports of five lakh cars from India to various destinations including UK, HMIL Vice-President (Sales and Marketing) Arvind Saxena said. Terming it as a "significant milestone", State Industries Secretary Rajeev Ranjan said, “It is no small achievement. This has been done in a record time". "In 2008, they have exported five lakh cars but this year they have doubled it. It is a significant milestone” he said.

Lauding Hyundai's feat, Chennai Port Trust Chairman Subhash Kumar said two multilevel car parkings have been planned in the Port. Urging the Union government to continue the fiscal stimulus package, Saxena said exports may come down if it was withdrawn. "If the stimulus package is withdrawn, then the exports may come down. We have been emphasising the need for extending it", he said adding the demand came down 7.5 per cent in countries like Russia due to the global meltdown.

Hyundai Motor India Ltd. (HMIL) has said that it is confident of adding 10 new markets to its export map in 2010. Currently, HMIL cars are sent to 110 countries.
Click to expand...
Source : Carzoo

Great achievement in such a short span of time!

Which was the one millionth model which was flagged off Zinam?? 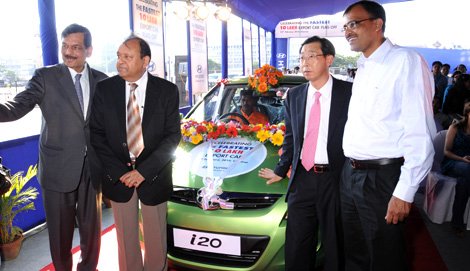 July 21, 2000 First major export-shipment of 760 Accent and Santro cars rolls out of the Chennai Port for Algeria

October 31, 2004 HMIL crossed the figure of 1 lakh vehicles in exports and emerged as the largest exporter in the Indian automobile industry

June 1, 2007 Hyundai Motor India adjudged the Top Exporter of the Year for 2005-06 in the category of ‘Large Enterprises’ and received the Gold Trophy by the Engineering Export Promotion Council (EEPC)

December 16, 2008 Hyundai Motor India awarded with the ‘Niryat Shree’ Silver Trophy for the year 2005-06 by the Federation of Indian Export Organizations (FIEO).

February 11, 2009 Hyundai Motor India conferred the Top Exporter of the Year for 2006-07in the category of ‘Large Enterprises’ and received the Gold Trophy at the Southern Region Annual Award Presentation by the Engineering Export Promotion Council (EEPC).

Yes my guess too was i20!! With this pace it can easily take over MSIL provided they maintain the quality and cheap maintenance!! And also if they can try to pull many loyal Maruti customers!

They are already pulling MSILs loyal cutomers too.

Few own experiences, I was Loyal MSIL customer, but settled with Hyundai now.

And many of my Friend's parents owned MSIL as their first car, But now all their children are moving towards Hyundai & few for FIAT.

Truly an amazing milestone!!
SRK may have been responsible for the initial success of the Santro, but the products and the quality/appropriateness of the same has seen them reach where they are today!!
You must log in or register to reply here.