Life has to go on, things need to be left in the past. That’s what I kept saying to myself after my accident last month that ended up with the verna being declared a total loss.
The thing about the verna was the features that it came with spoilt you, like the start stop button and keyless entry. These things come into play while choosing your next car. Which leads me to what I need while chooising the next car, well its not a replacement but more of a fill gap before I can get a replacement .
So with that in mind I wanted something that wasn’t too costly, had some if not all the features verna had. Being used to sedans, I was stuck with a bottle neck the budget being 9 and stretching badly to 10 there weren’t much sedans that appealed to me, after a bit of thinking since its only a stop gap why not go in for a hatch instead? If i like it might serve as a good run around the city car
The first thing that came into my mind was the polo, the gt tsi was amazing, now due to my injury i cant drive so all test drives were conducted by dad, he loved the gt tsi's engine but after thinking hard I felt if I were to spend that much I could rather pull some strings at the Hyundai dealership put in some more and taken a verna again, but no, I do not like the new design the verna has , and so that too was chucked.
Next the jazz, wonderful car looks good, has some good interiors somethings here and there I did not like. Next the Baleno, ive read some good reviews of its performance and price for what they provide is good, then again it has a waiting period and I couldn’t afford that so back to Hyundai, at first my father saw the sportz elite i20 in blue color and fell in love, checked out the pricing and its comes to 7.67 on road and we decided that would be what we get till I got home and checked the brochures and decided if at all we choose the i20 it will be the asta(optional) about 1l more the projector lights and alloys as well as the avn had me hooked onto it.

While we finished all formalities of the verna and the salvager took the car away(sad moment for me) we went ahead and took a test drive of the i20 petrol, now since im unable to drive I sat in the back seat and dad took it for a spin, at first in my head all the reviews stating it’s a poor engine came in my head, and when my dad stalled it while getting out the gate made me believe it more, but then got on to an open road and dad floored it and I could feel the pull though not as much as the verna but just right to put a smile, a quick glance at the odo and the revs were above 4500 rpms, dads impressions was the car is smooth, a tad better handling than the verna, good enough power not the best but not the worst either. We went back to discuss pricing etc and was surprised to know that the prices have been increased by 20k for the top end we went back. Later I realized Hyundai has added 4 more airbags and speed sensing locks, after a lot of thinking we decided to go and book it, i actually wanted the star dust since it did resembled the carbon grey verna we had, but after a few rejects from mom we opted for our new favorite and least spotted i20 color the Phantom black

The booking process was simple and easy got a nice docket to maintain paperwork and was promised delivery in 10 days.
10 days turned to 15 days when I was given the vin no. all checked out well that it was a recently manufactured car . We even followed up for tracking the trailer location and the dealership was helpful. The car arrived at the dealership around 21st September morning and we proceeded to do our pdi by noon, all checked out well but i just could not seem to understand why the car lacked the gloss a black car should have, but then i chucked it out as it wasn't washed after the journey from Chennai to here.
Trying for a delivery the same evening was not possible, like the verna we wanted to get the car out on temp registration and drive the car ourselves for the rto formalities, registration would be done by the dealership but we would drive it down and not them.
Dealer asked us to come over the next day post lunch, we headed over at 4pm and the car was prepped up, insurance was done and crtm system was down so we had to wait and then the usual ceremony and off we went.
First stop was the gas station to tank up, the manual states 45 litres, the dealer added in 5 litres, we tanked to the brim and about 47.67 l went in. seems like the tank is actually 55l not bad and then drove back home and then a few places for groceries etc.


Now i havent been able to drive the car yet due to my injury from the accident, should be fine in a month or two thats when i will be able to give my own views on the performance, for now as a passenger and from what my dad has told me.


The goods
- The interiors look top notch, best in the price range
- NVH is good
- The ac is a chiller
- Headlights are powerful and have good coverage
- Good sound quality from the stock speakers
- Good navigation system
- Good looks


The bads
- Engine sounds like a diesel when you start up in the morning
- Interiors seem to lack the quality, hyundai was known for post the 2011 verna
- The paint job is horrendous, has the orange peel texture, and being a black paint it makes it glaringly obvious
- The clutch is too light and needs getting used to or stalling frequently
- The rubber around the windows and doors are uneven and not properly fixed
- No fe display or dte
-No ecm on the top end, why Hyundai why?
- No cd player(not an issue for most)
- No leather seats


all in all the car is good, have not done a long trip so cannot comment on the comforts, and neither of the performance till i am able to drive

had applied some Chemical Guys blacklight on a small area to see the difference between factory paintjob finish, thats when the orange peel texture was more evident 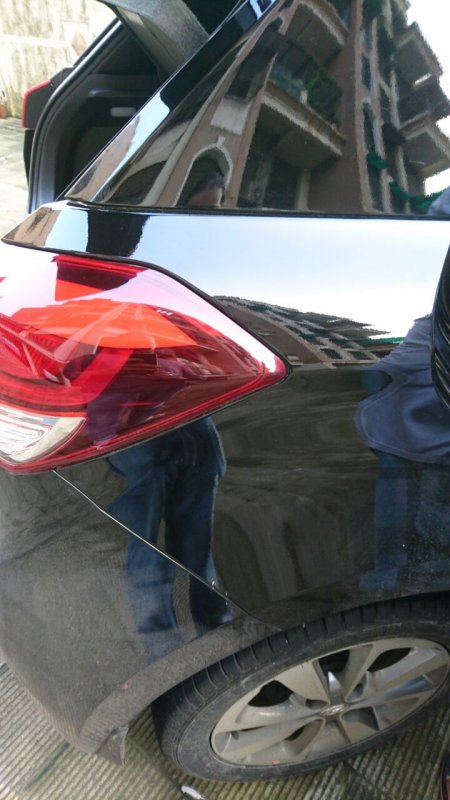 Installed chrome garnish for the windows 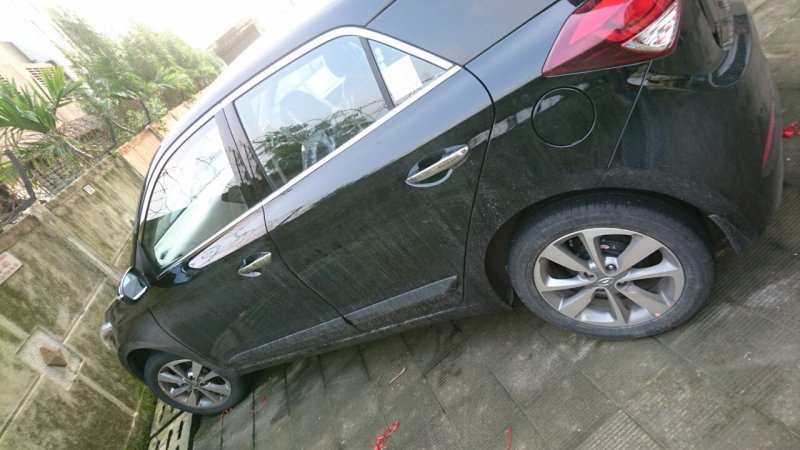 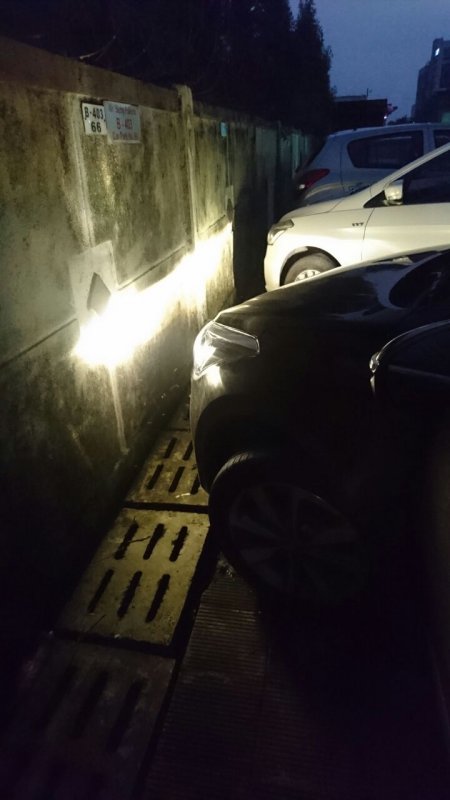 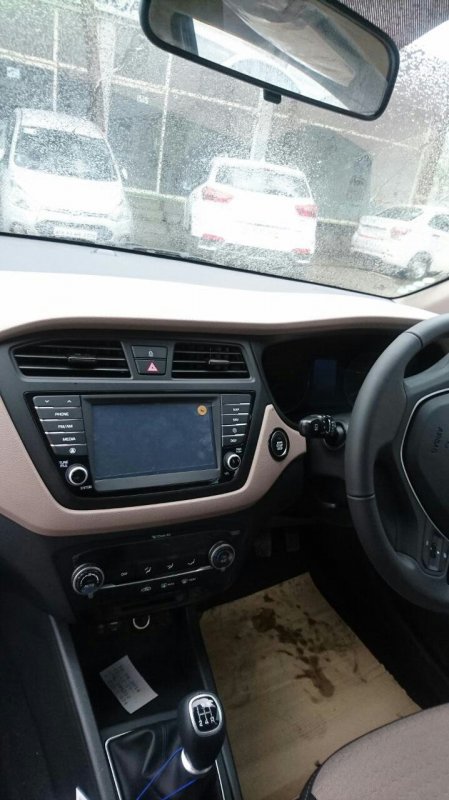 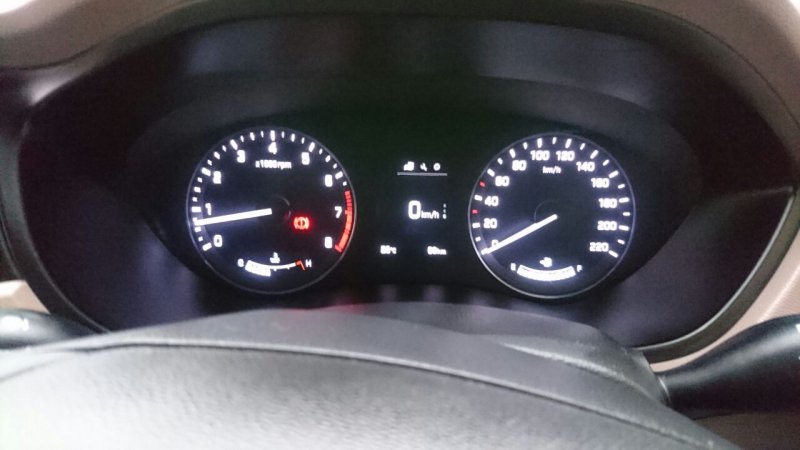 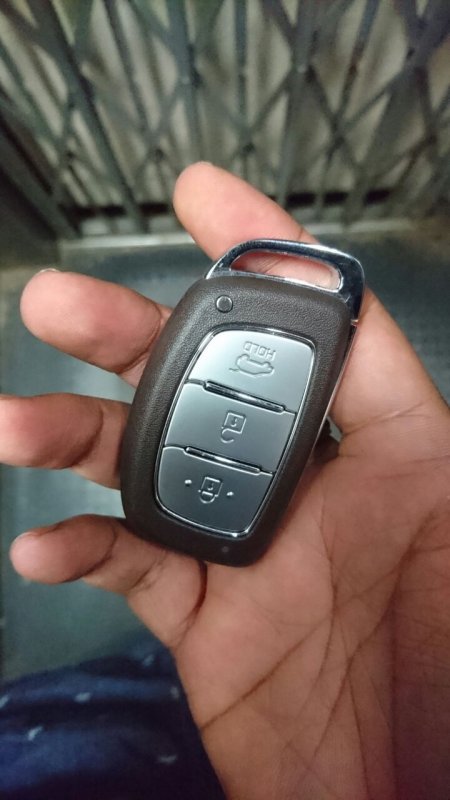 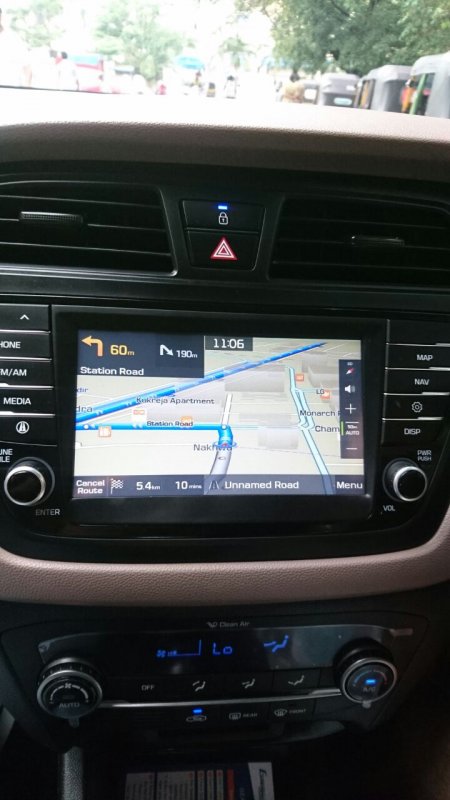 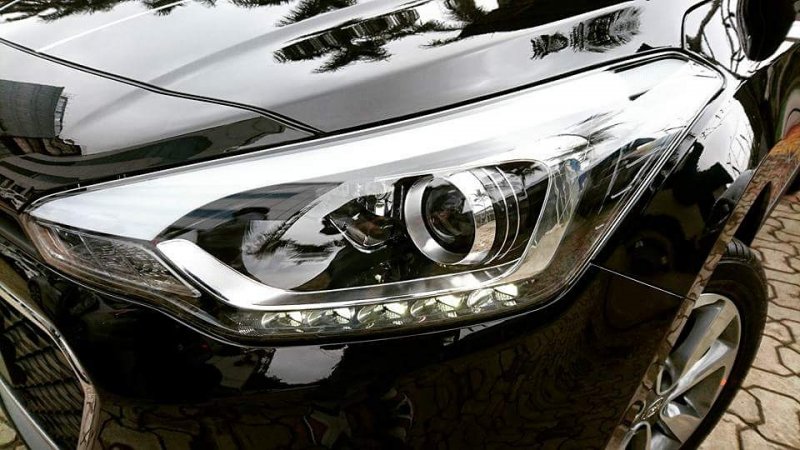 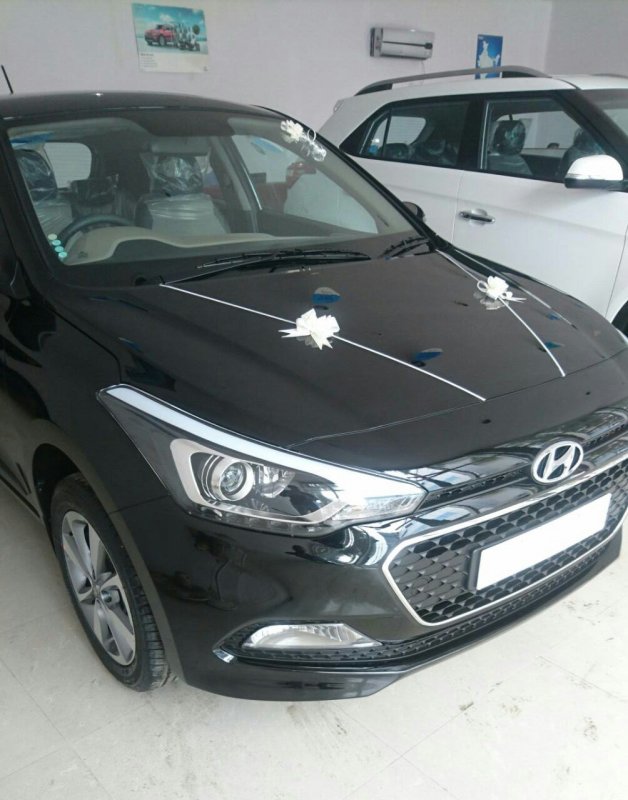 will add more details as we use the car more, as well as pictures when i click some in the coming days.
Last edited: Sep 26, 2016

even though the quality is the not the same but it felt more premium than the new elantra's and the creta's interior.

This is going to be one hell of a thread just like your verna's.
Get well soon and get back to the steering

Sent a mail to the dealership about the paint, lets hope they fix it.
Also had a word with a detailer, he said the car needs to be wet sanded and then polished to make it look proper, this is an issue ftom the paint system in factory.

Will be taking the car to the rto today for registrstion, was delayed due to their payment systems being down.

Found out how to update the avn, looks pretty easy, however i could not find the sd card slot and on checking with the dealership they said its inbuilt now and they do it using a pen drive, updates will be done whenever you bring it for service for free once per year for three years. I guess we need to pay a small fee to update it more than once per year.

The maxpider 3d kagu mats from the verna found its new home in the i20, phew saved 6k on that

Congrats for buying i20 Nigel bro.She is looking hot in black colour and one of my favourite colours in i20 after blue and red.I hope that you would buy a sedan next year as you said with me before.

Congrats on your new ride! What was the on road price for asta? Also, do the projectors come with Xenon bulbs?
I'm definitely gonna keep an eye on this thread.

Hi,
Congratulations on your Hyundai Elite i20. Wishes to clock many more miles without any issues.
The Center console with the Factory fitted music player looks very neat.
T

Congrats nigel for the i20. She looks a stunner with the new black shade and the drls. I guess next time in mumbai, this will be my ride. :P

Congratulations on your new car

The on road price is 8.89 got it home for 8.59, after loyalty, some negotiations and due to the revised price with the 1% vat not being there when i went to complete the payment so had old price.

The headlights come with a 60w halogen high and low is controlled by an actuator, i stalling hids would need the projector to be changed, since halogen and hids use different projectors, the stock bulbs offer much much better illumination than the stock non projector one.

Finished registration today, since the time of delivery and today car has clocked 180km was stuck to driving only in my area due to temp reg
Last edited: Sep 26, 2016

I must say that black colour have improved the looks for Elite i20, which already is a looker. Great Choice

Heres two pictures, shot yesterday, visited the dealership about the paint issue they gor the car washed with diesel and then one guy from 3m came buffed the hood and then takes wax with one hand applied and the other hand wiped off. Finished the entire car in five minutes alone, then they come and say sir black, carbon grey, passion red blue are such colors you can never get any swirls out of it and since its new car we cannot polish properly. Fed up with them we got the car out, will make a visit to 3m car care and check how they can help.
Will upload more pictures as and when i can use my dslr.

Few things i noticed, the engine seems like the smaller version of vernas engine, it does not have coilovers, the ac compressor is the same as vernas 122cc no wonder this chills the car and the rear ac vents help keep the car cool.
Still thinking of adding windscreen sunfilm 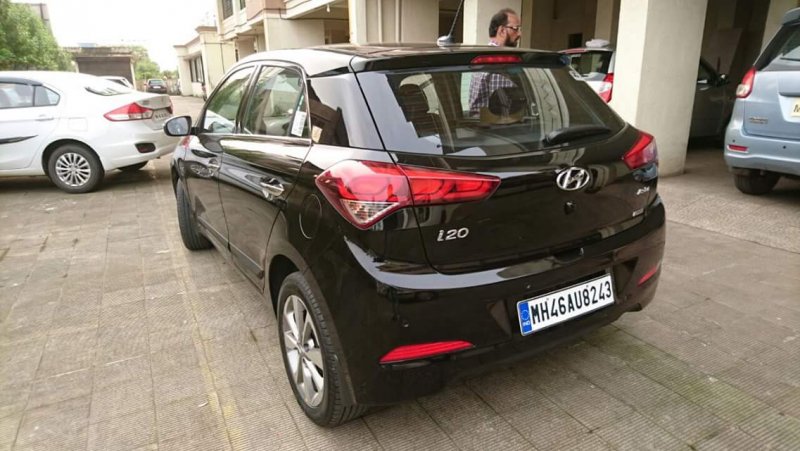 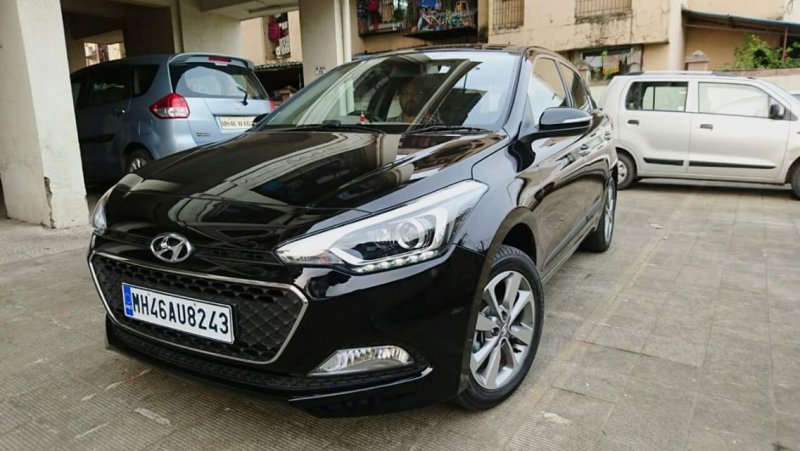 Get garware ice-cool shield. VFM plus works good. Have installed in figo and verna for 4k. And I guess it's 50% heat rejection.

Will take a call when the sun comes out

Congrats nigel for the i20. Its a stunner in the black shade and the drls. One of the best car with regards to features!

You can also go for 3M CR70 sun-films. They reduce heat (70% reduction) and glare from oncoming traffic. Though it might be a bit expensive.
You must log in or register to reply here.