hey buddy was it covered?? it was small then i10 or equal to it in size??
A

Yes it is indeed i15. It seems hyundai is on the launching spree but they have completely forgotten to resolve their core issue of "steering rattle" in i10 and i20. Wake up hyundai, you can't fool Indian customer nowadays.

It's a temporary fix. It will soon return after few k kms. Hyundai top people have admitted of this problem but they still don't know the solution till date.

The fix they apply is change in yok pad and spring in steering rack.

Hyundai will be focusing towards rural market to earn most of the profit from upcoming HA which will be placed under i10. And, Santro Xing won't be phased out.

Hi, this is features list of new small car from indian auto blog.

- Fully loaded variant has beige interiors, air conditioning, power steering and two tone dashboard.
- Material quality, fit and finish will be nearly as good as i10. Despite being a low cost car, the instrument panel is placed behind the steering wheel and not in the center.
- A coin tray sits above the glove box, like on the Ford Figo.
- HA has CD/MP3/USB playing capability. The buttons, arranged in a V shape are finished in grayish silver.
- AC control knobs will be dial type (read like i20). The primitive twist type has been ignored but continues on Santro.
- Height adjustable head rests for front seats and an integrated head rests on the rear.
- A three-dial layout with the speedo residing in the middle, engine temperature (digital) on the left and fuel quantity (digital) on the right.
- Two windshield wipers are installed at the front unlike the low cost Nano’s single wiper.
- Electronic Power Steering will be fitted for better fuel efficiency.
- The i10?s steering wheel has been carried over.
- Front windows are electrically powered and rear windows will be manual.
- The angle of the rear windshield generates a little more luggage volume.

Lets wait till the we get more clearer pictures. But good that not much cost-cutting has been done on the car.

Despite being a low cost car, the instrument panel is placed behind the steering wheel and not in the center.
Click to expand...
What kind of cost cutting does this achieve? 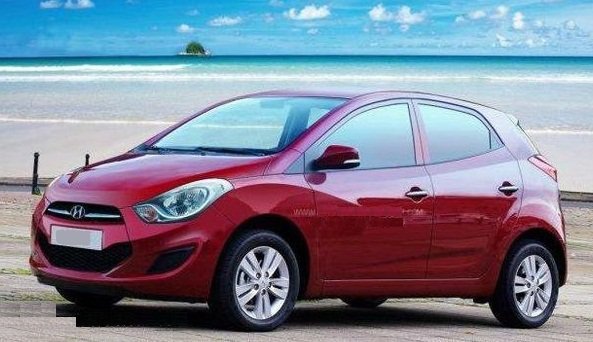 Ooo! Nice lines on that. Although looks somewhere in b.w i10 and i20 as Surfer commented. Front is similar to i10. How does the rear shape up?
P

I didn't find any thread on the new offering from Hyundai. Below is an article from Bharatautos.com. The photos are from various sites

Hyundai Motor India (HMIL), the second-largest carmaker in India, has been for quite some time now working on a new small car to rival Maruti’s hot seller Alto which will be placed below the Hyundai Santro. The new small car, codenamed HA 800 has been seen doing rounds all over Chennai for quite some time now, but until now there had been no information from Hyundai regarding the launch of the new Hyundai HA 800.

Now, Hyundai has revealed its plans for the new small car in India. According to Y K Koo, Senior Director (Sales and Marketing) HMIL, “We are planning to launch it in the first half of next year. The car will be manufactured in Indian plant. Hyundai Motor India is very strong in compact car segment. With this launch, we hope to dominate the rural market also. That is our strategy. If we have a small car it is easy to penetrate into the rural market,”

Hyundai small car will be powered by an 800cc engine with decent performance figures that is currently developed at the company’s R&D headquarter in Korea. The company will not export the car initially and will be manufactured at its Chennai plant.

Hyundai is also increasing the number of outlets as the new car will help the company to increase its share in the rural and tier 2 towns.

Looking at the spy shots of rear end, I do not think that backlights will have the same design as rendered in the above picture.

Hyundai Eon name confirmed says ICB
You must log in or register to reply here.