Everytime I travel between my Bangalore house and my Maayka, Anantapur (AP), I have harrowing experiences. At 1st, I see many badly crashed beauties, (pics of which will be posted in the Pics of Accidents Thread) near the Devanhalli Rural Police Stn., throughout the journey, it is 99.99% likely that I will spot at least one or two accidents. Anantapur lies 200km from Bangalore, on the Bangalore - Hyderabad expressway, ie- the NH-7. I traveled from Bangalore to Anantapur today, along with my family in a Corolla. On the way, I spotted these 3 accident scenes:An exhaustive write - up will follow soon, with indicative pics for each accident.
An MLA's Scorpio 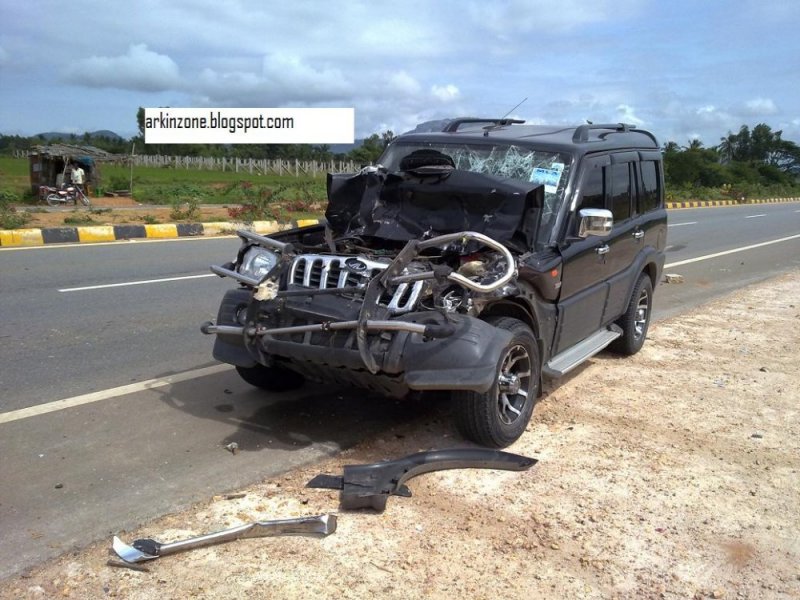 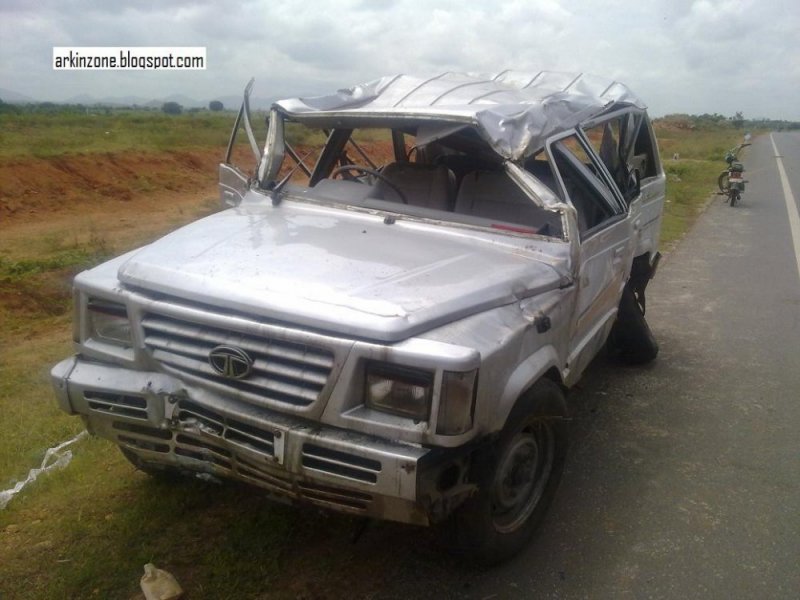 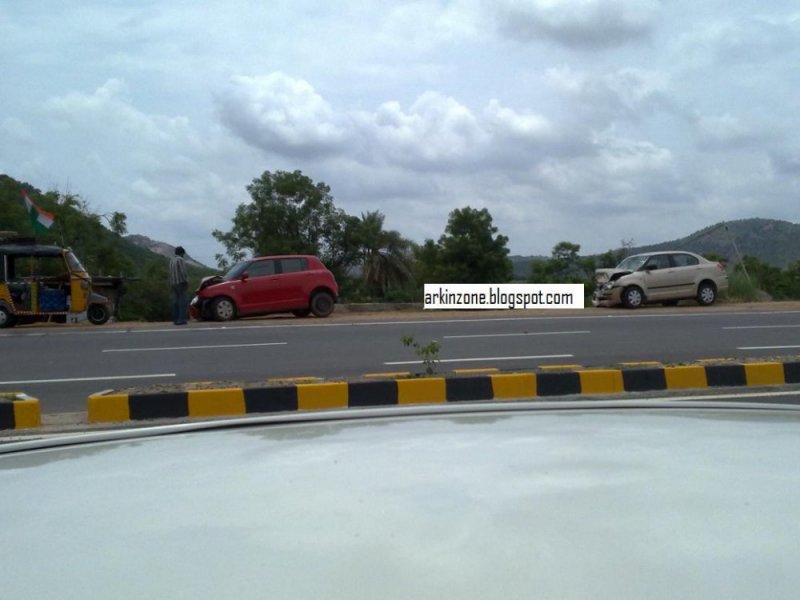 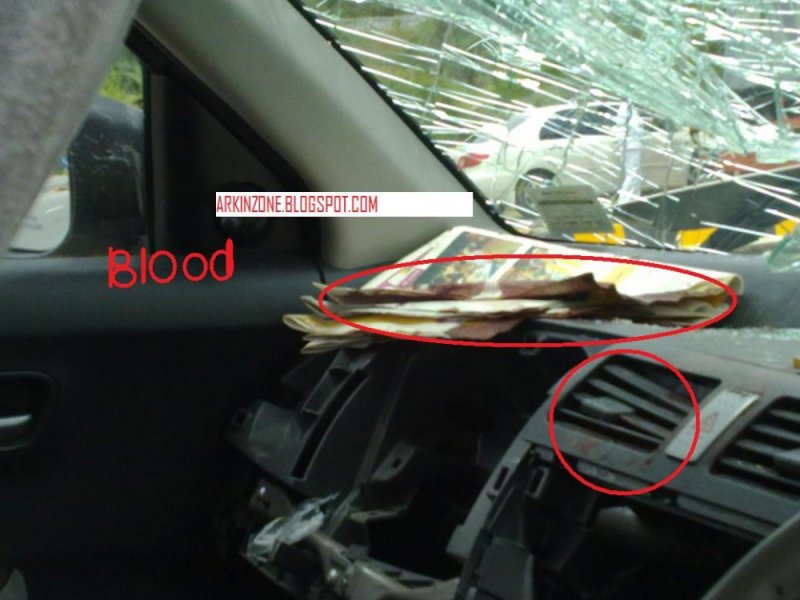 Note to mods: Please don't merge this with any other thread, as this thread is not just another 'Picture' thread, what I post ism based on the 1st hand accounts of the driver of the Scorpio, and villagers who experienced the accidents and is meant specially
Last edited: Aug 15, 2010

Oh god a badly crumpled Scorpio.
I can't even imagine it!!!

Hope the occupants are OK

I shall start based on the date of occurrence. Some parts of the NH 7 stretch in AP are still under construction/repair. It was here that this unfortunate accident occurred on the day before y'day, in the night. Because the other lane (opp. lane Hyd>Bang lane) was closed, vehicles moving in both directions have to use the same lane in one or two stretches. What happened was, the DZire and Swift collided head on, apparently because of of them was overtaking. 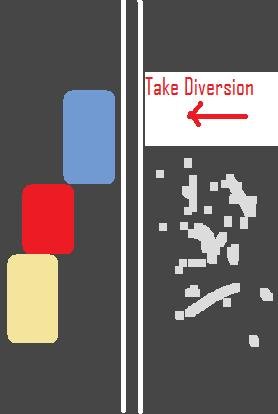 The DZire's Driver was wearing his seatbelt (the front seatbelt was completely stretched) and presumably escaped unscathed while his co-passenger was not wearing his seatbelt, and so, he probably hit the windscreen and fascia. I say this, as there was blood all over. On the cracked dash, the AC vent, seat cover and a newspaper with dried blood sat on the dash. Both the Front seats were bent forward.
Both front occupants of the swift were not wearing their seat belts, and bore a great impact. There was more blood all over, more than in the DZire, the front seats were bent, the backseat was displaced, and there was a dried newspaper with dried blood. The seen was harrowing, as the driver's sandals and glasses were left behind. The villagers helped us with some facts.
Pics:
Swift 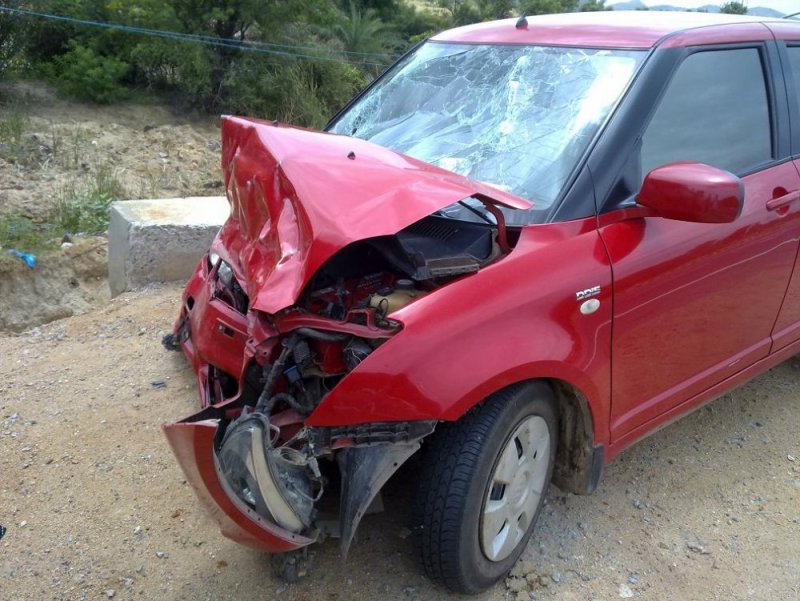 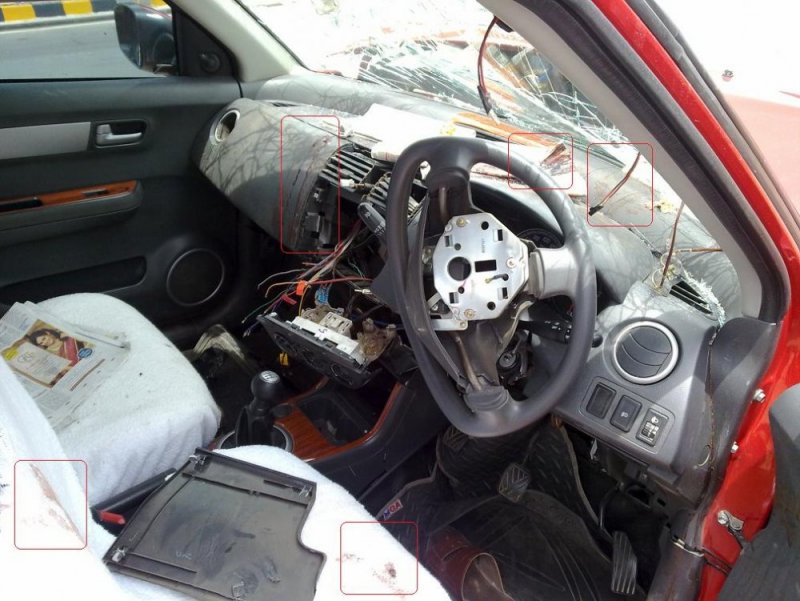 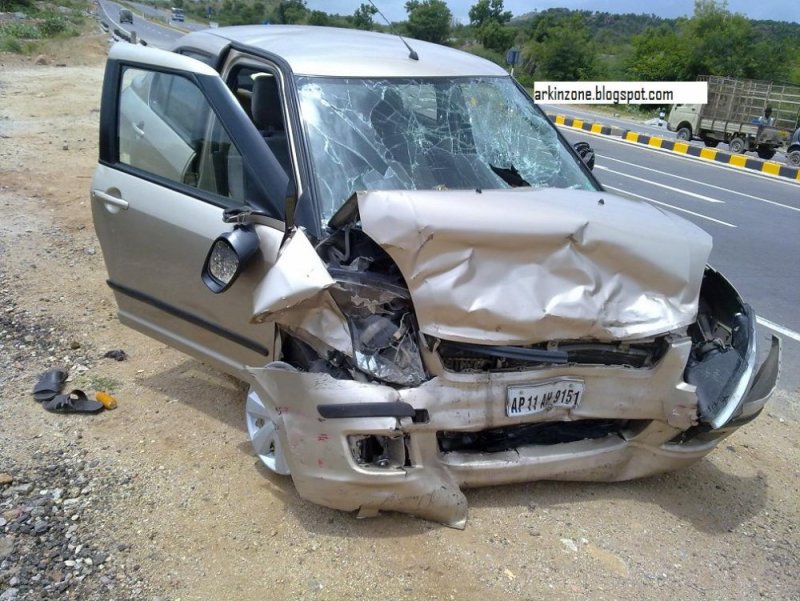 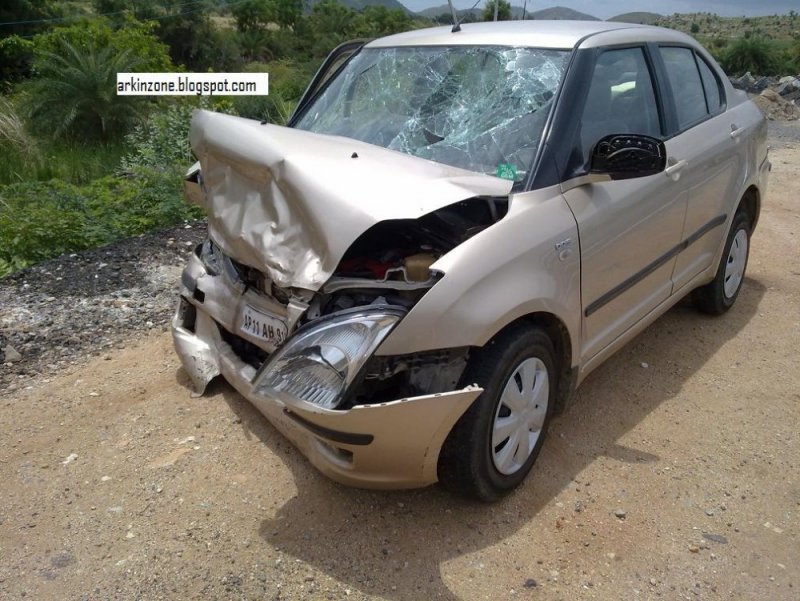 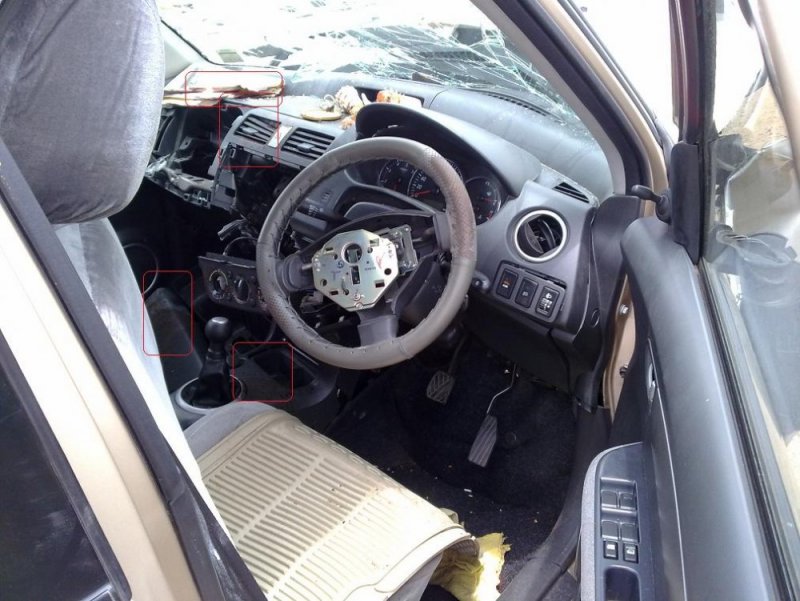 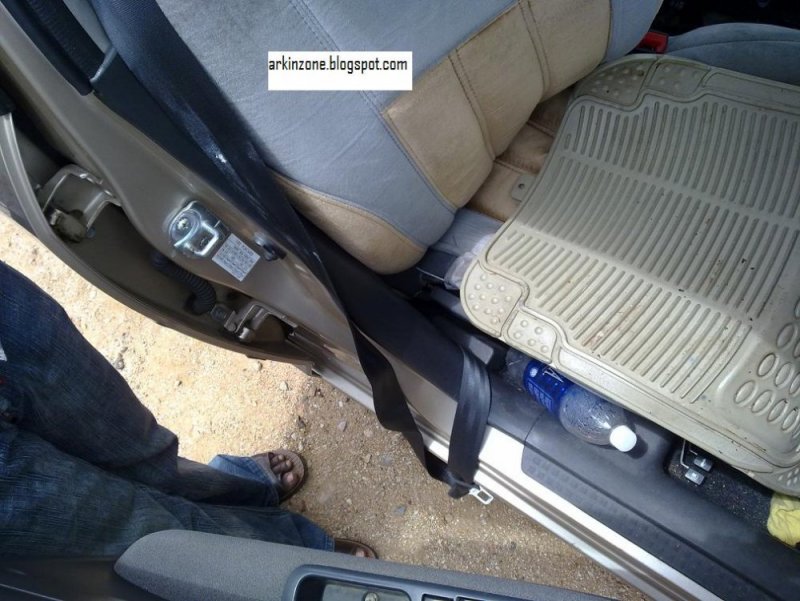 Sorry if the illustration was poor, I'm using my Grandpa's laptop

Really horrifying scenes Arkin.
See how the steering wheels have got bent.
What happened to the Swift driver.
I think the Red Swift guy was overtaking foolishly.
As we can see maximum damage to the Dzire, What could the poor Dzire guy had to do, when he has no place to leave the oncoming vehicle.
It's an alarm to all driver's like us.
Never overtake when one can't see the road ahead clearly.

Yes, we can assume the Swift guy is at fault, considering that he was wearing his seatbelt.
S

one thing which i failed to undestand. how come both the cars have taken the impact on the same side? ie., from the pics one can tell that the swift's right was hit. also the Dzire's right was hit. in case of a head-on collision, this is quite impossible.

This happened at about 5 in the morning. The MLA's Scorpio was being driven from Anantapur towards Bangalore. It so happened that it was cruising beside a bus, when a Truck (DCM Type) at full speed, started honking in order to overtake. The driver of the scorp swerved to the extreme left to give him space, but could not see another slow moving DCM, and rammed into it. The driver,who was slinking around, didn't suffer any serious injury, in we couldn't see any on him. He was the one who narrated the incident to us. The MLA sitting in the middle of the rear seat sustained a small cut. 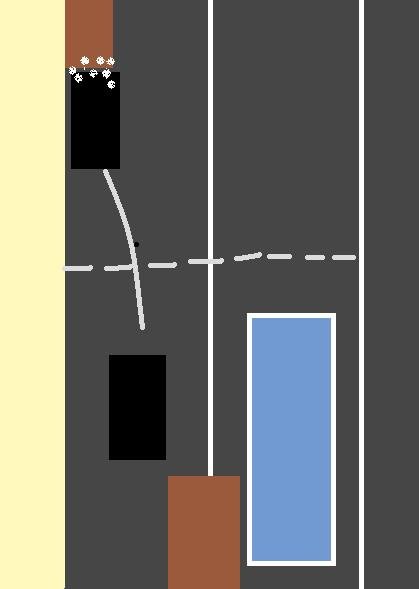 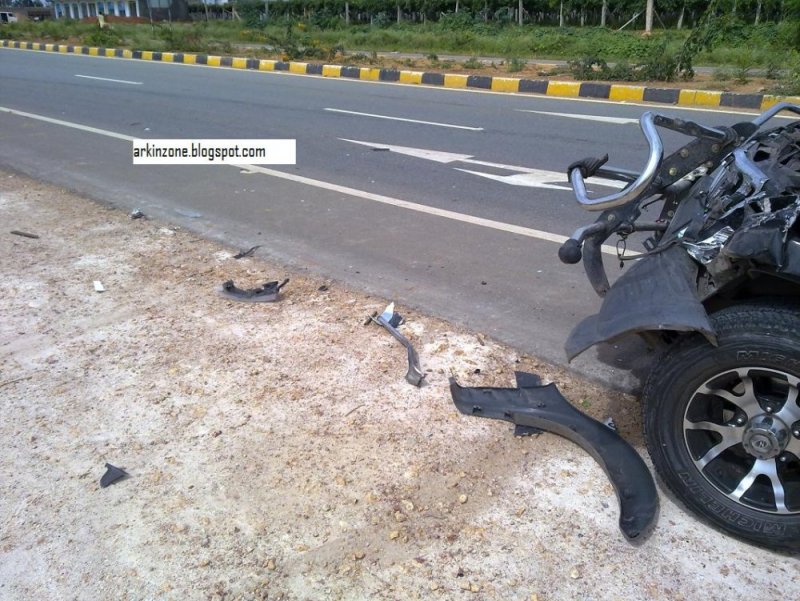 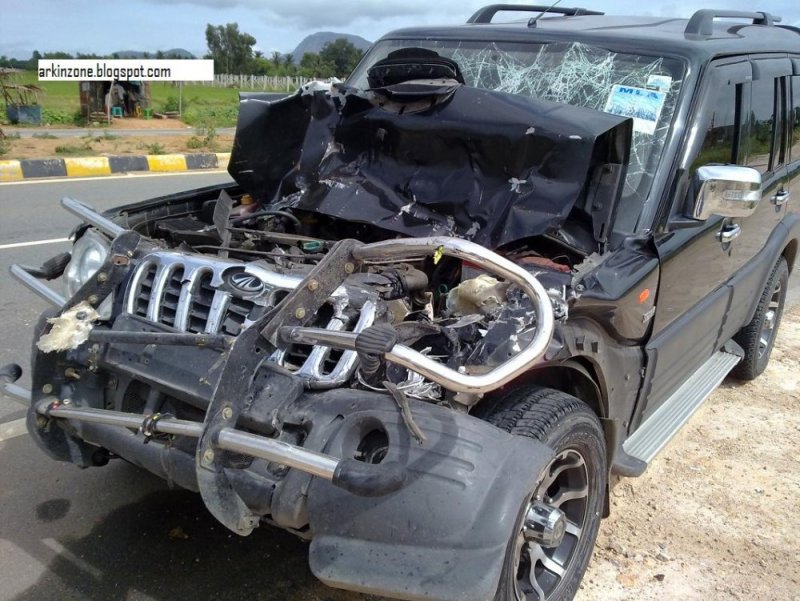 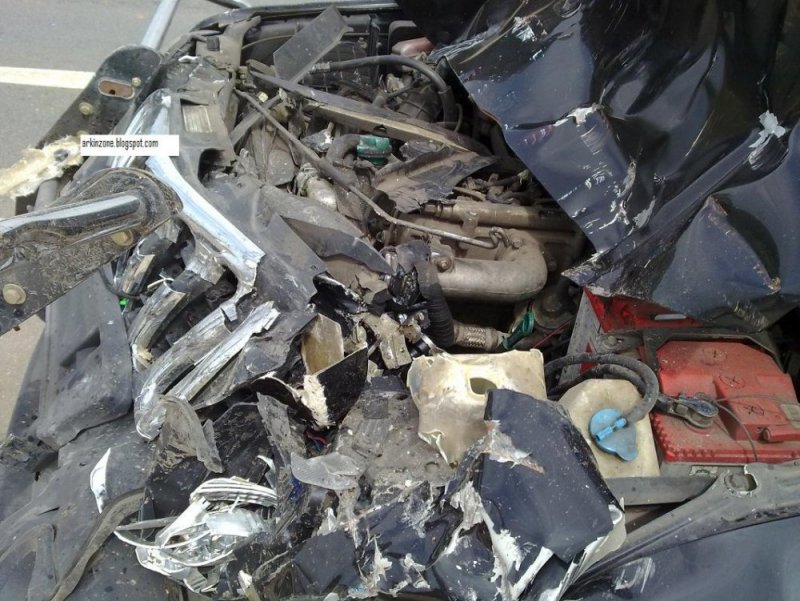 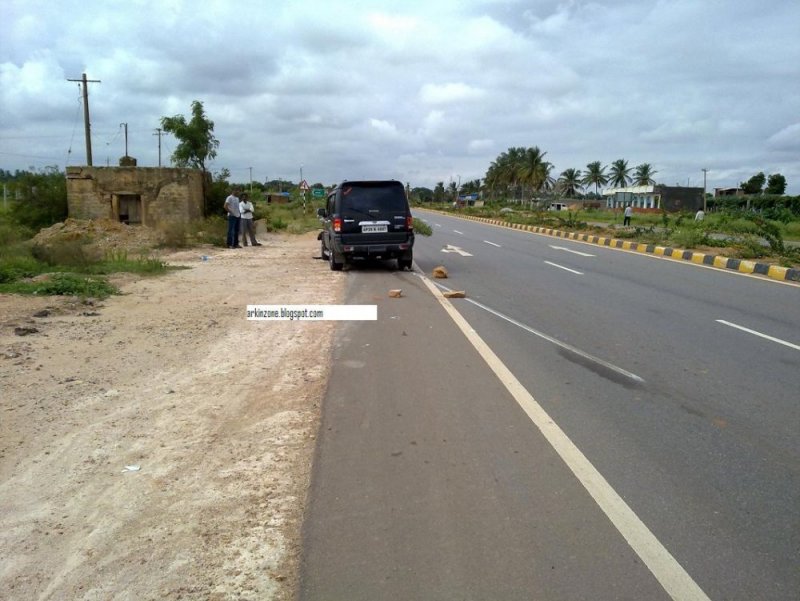 sriharsha said:
one thing which i failed to undestand. how come both the cars have taken the impact on the same side? ie., from the pics one can tell that the swift's right was hit. also the Dzire's right was hit. in case of a head-on collision, this is quite impossible.
Click to expand...
Look closer. Swift's left was hit, DZire's right was hit.
Last edited: Aug 15, 2010

Arkin
Look closer. Swift's left was hit, DZire's right was hit.
Click to expand...
Hey buddy it seems clearly from the pic that swift was overtaking & it's right side is damaged not the left.
Last edited: Aug 15, 2010

the scorpio looks scary. the only reassuring part is that even in such a bad crash, the driver & passenger escaped unhurt.

Guys, I'm shocked!! :shock:
My dad was reading a telugu newspaper, Eenadu, dated 13th Aug., and he showed me this - 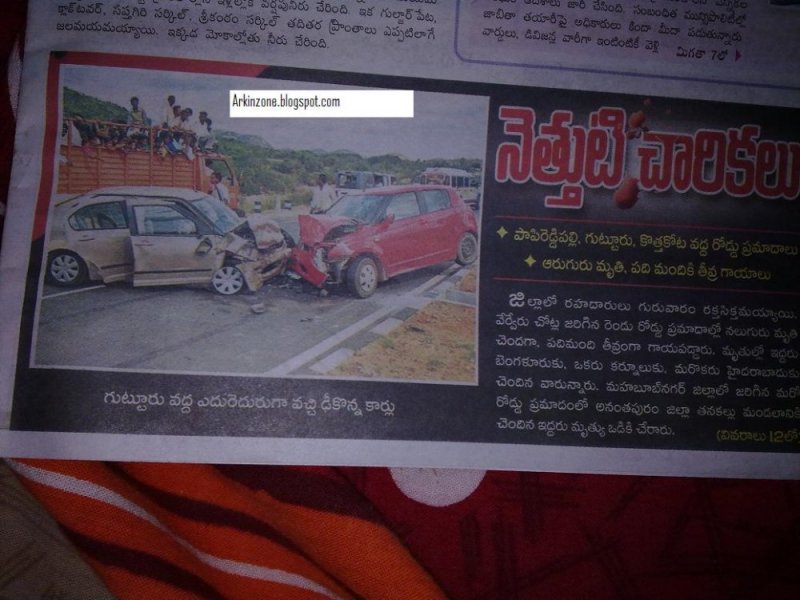 Apparently, the DZire was going in the Anantapur (Hyd.) direction from the BAngalore side, while the Swift was going from Hyd. to Bangalore. late on 12th evening. Mr. Madhusudhan in the swift expired on the way to hospital.
Click to expand...
I'm near tears. One life gone. If only he had just worn his seat belts..Let this be a lesson for all of us.

RIP, Mr Madhu. May the almighty give strength and support to your family. We hope your mishap will prove to be a meaningful example to many.

What do you guys think?
S

*Arkin_Young* said:
Look closer. Swift's left was hit, DZire's right was hit.
Click to expand...
no dude. just see. the left side fenders of the both the cars have not suffered any damage. also see the pics in the news paper. i think something is fishy. nobody else feeling the same?

The Swift crash is scary.
In one of the pics i can see tire marks of the Scorpio.
You must log in or register to reply here.