I decided to buy something a little more heavy duty. Found ResQtech inflator which uses a completely different design from the usual Chinese manufacturers. The software interface, display and motor are all different and feel better designed. I delayed to make this review to get a good Experience of the device. And i am happy to say that the device has been working nicely since last 1 year.

Bold points-
1. There is an offset of 1.5 to 2 PSI. The gauge is not accurate so you need to Over-set the PSI to +2 .
2. Loud tractor like sound when inflating. Definitely far louder than my other 2 inflators.
3. Nicely bright 0.5w LED lights
4. Gets very hot when Inflating. The fan actually slows down as you start the compressor. I have to fill flat tyres in 2 phases with some cooldown in middle.
5. Very compact unit.
6. The Electrical plug is fiddly and often comes loose. 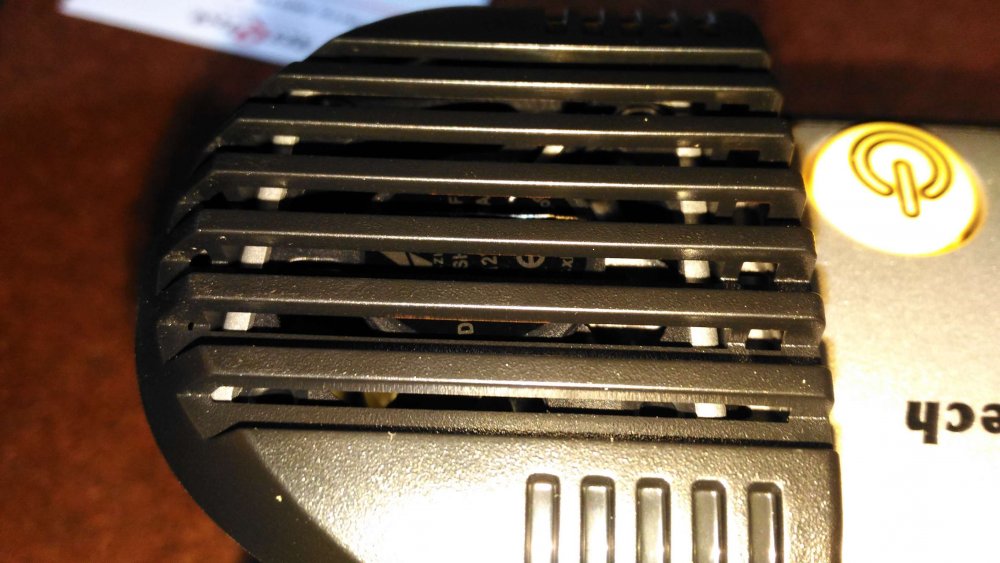 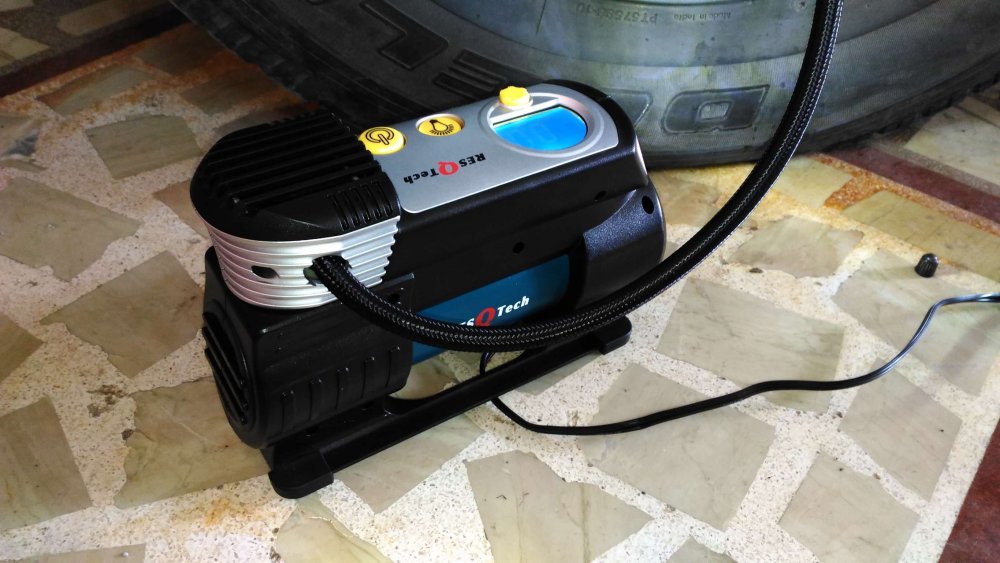 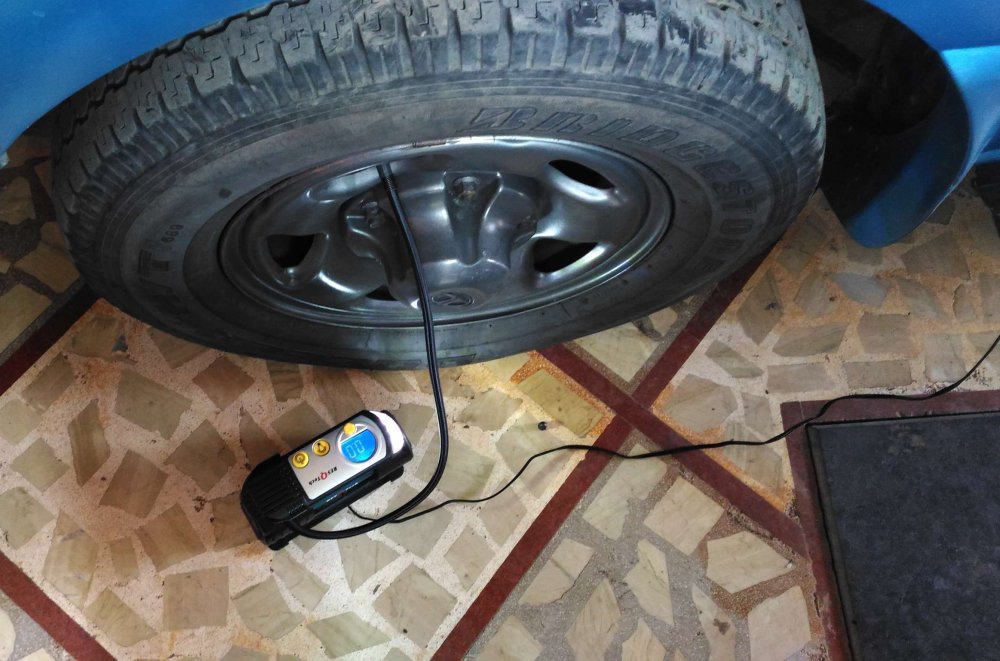 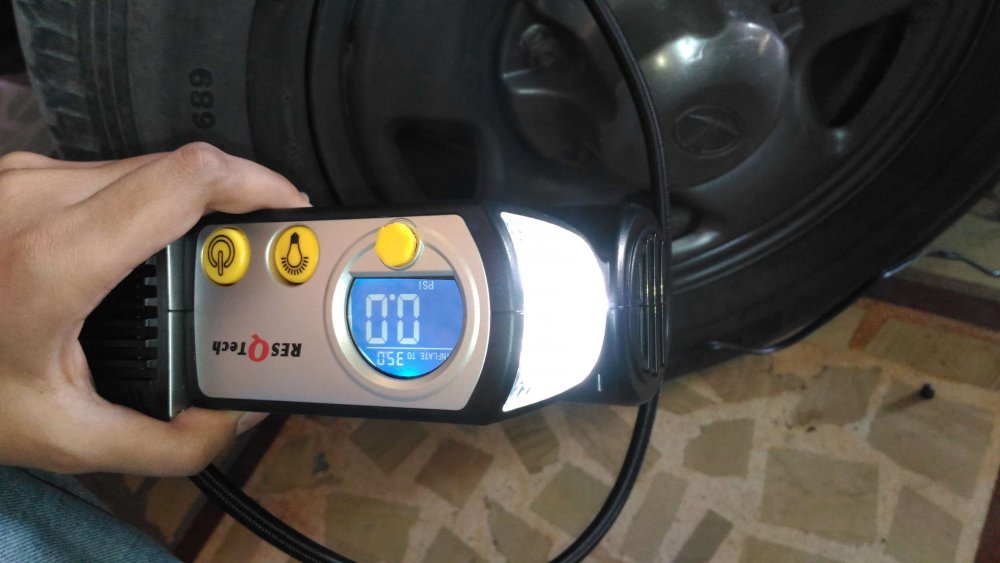 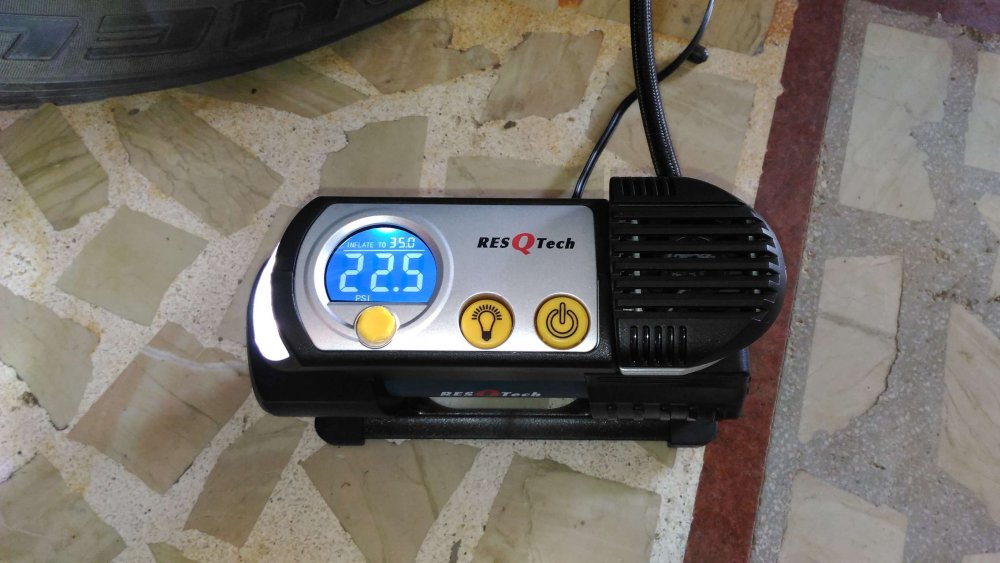 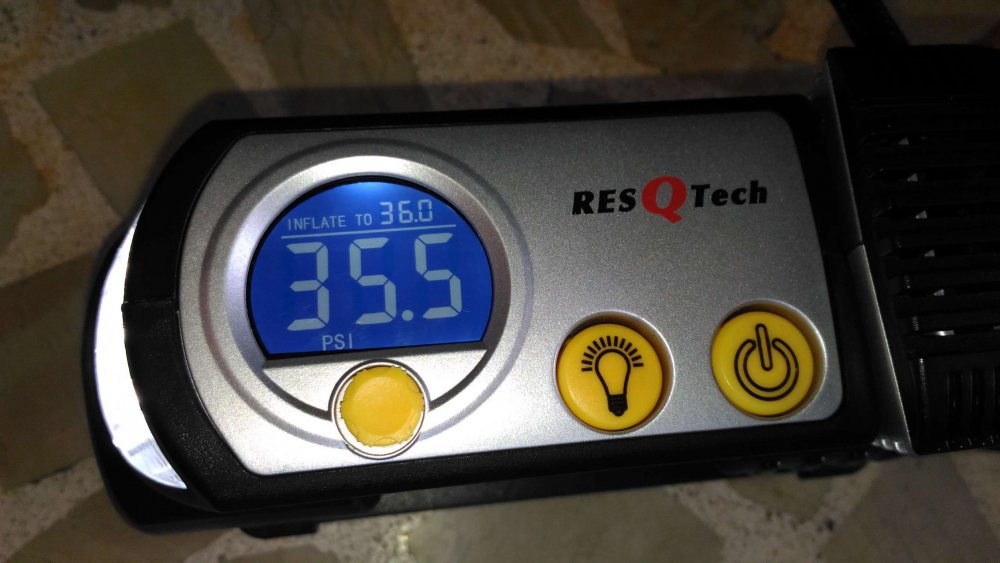 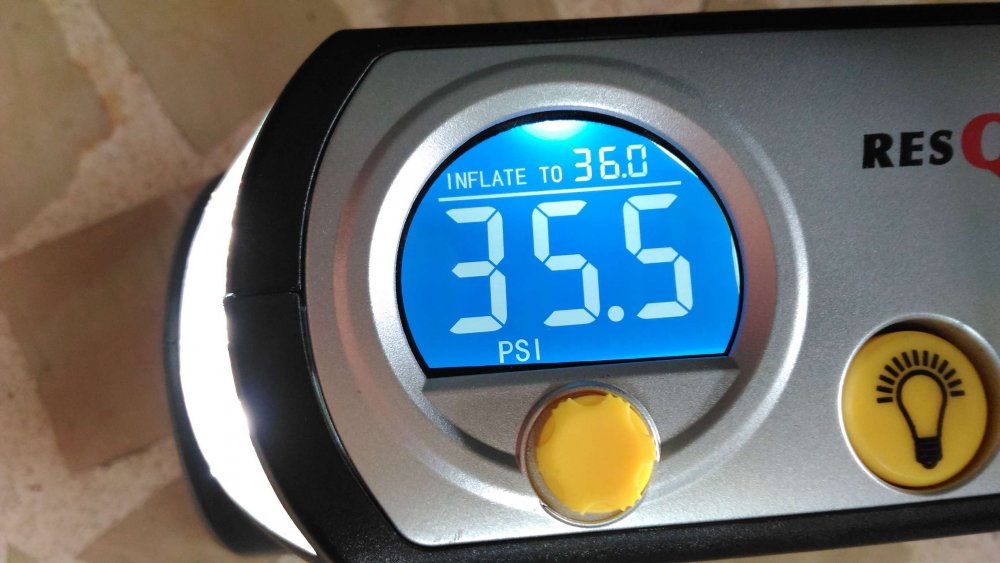 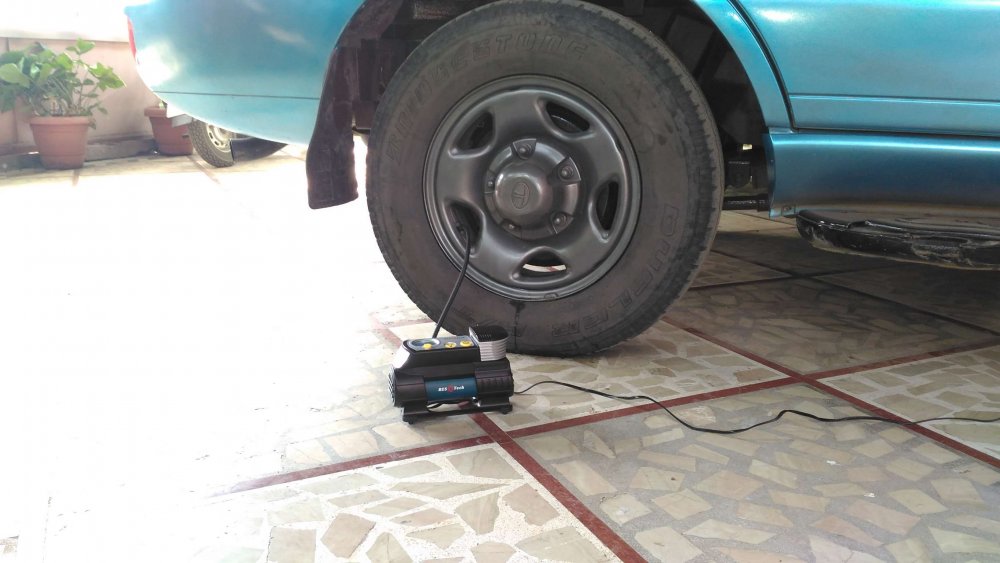 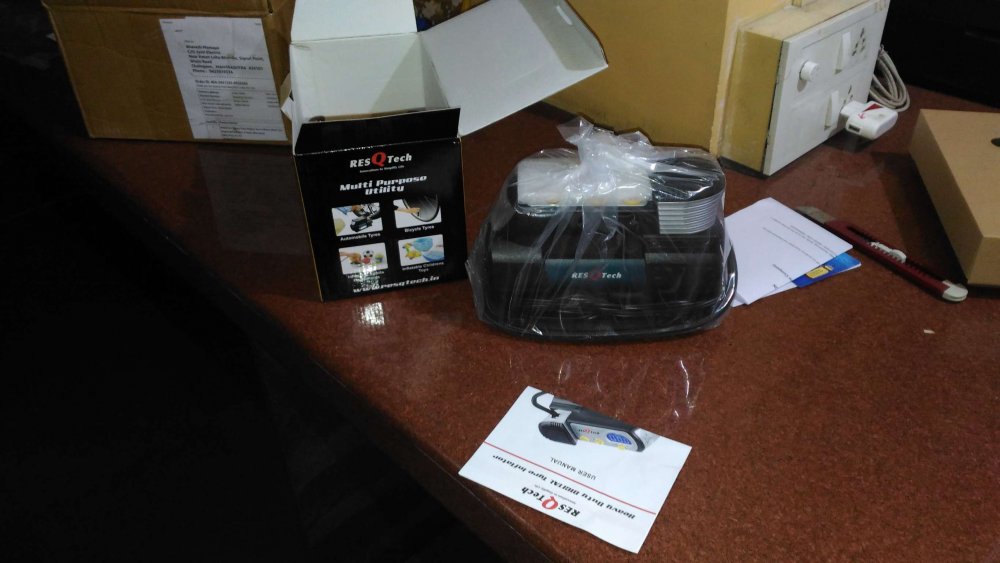 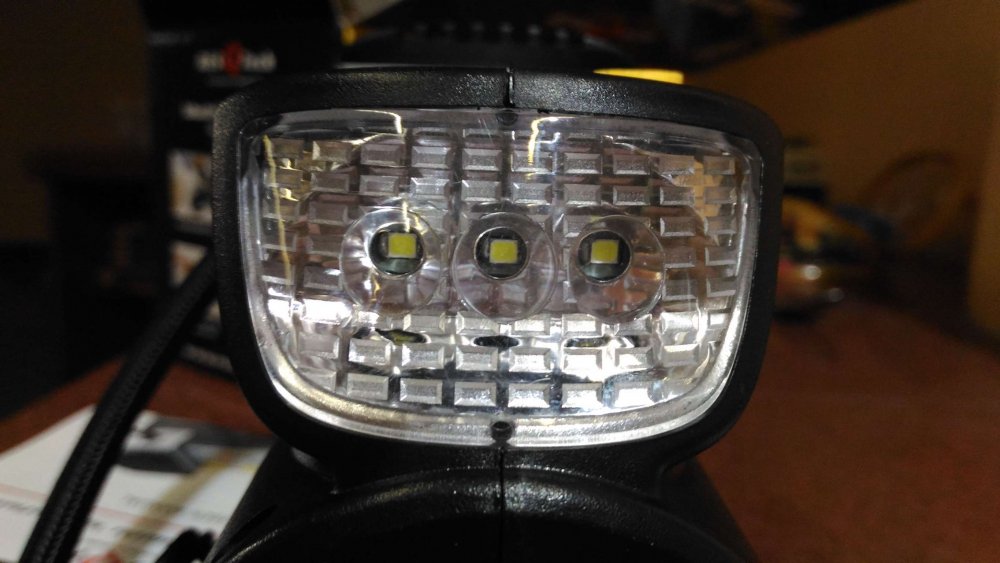 Looks strong. How much time it requires to inflate one tyre? (the feature list says 3 minutes for a full tyre - your other post)

How is the sound when the inflator is on (hope not like the other one - manual/electric air compressor)?

Nairrk said:
How much time it requires to inflate one tyre?
Click to expand...
Haven't had any flats. But for top ups, its slightly faster than windek.

Nairrk said:
How is the sound when the inflator is on
Click to expand...
Loud & Grunty like a Tractor. Definitely louder than usual small inflators.

bhvm said:
Loud & Grunty like a Tractor. Definitely louder than usual small inflators.
Click to expand...
Oh.. that will be disturbing to others. 10 years back, I purchased ordinary tyre inflator which produced big loud irritating noise and one of my neighbour came and asked me that whether I am doing any drilling work.

@bhvm How does it connect to valve stem? Should we thread it like Windek or some other locking mechanism?

Prabhagar said:
@bhvm How does it connect to valve stem? Should we thread it like Windek or some other locking mechanism?
Click to expand...
I was checking this product before Covid-19 and it has thread like nozzle (can see from the picture).

It is still available in Amazon.

Nairrk said:
I was checking this product before Covid-19 and it has thread like nozzle (can see from the picture).

It is still available in Amazon.
Click to expand...
Thanks @Nairrk.. Its the same thread as Windek.. Valve stem has to be of good quality thread groves or else there may be chances of minor leaks even after tightening it for inflating.

Today, I have received the ResQTech tyre inflator from Amazon. Nicely packed item which arrived before time. Not giving a long review as same product has already been reviewed by @bhvm .

Give below a few pictures of the product .

The parcel pack, when received. 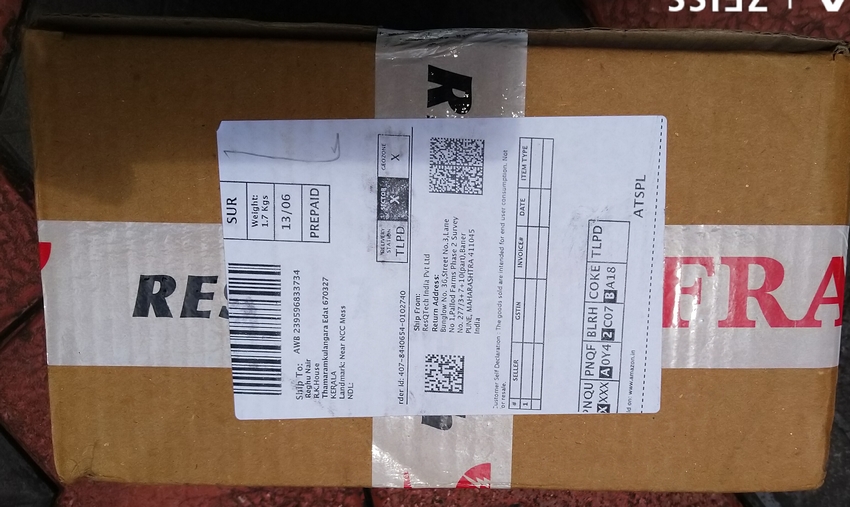 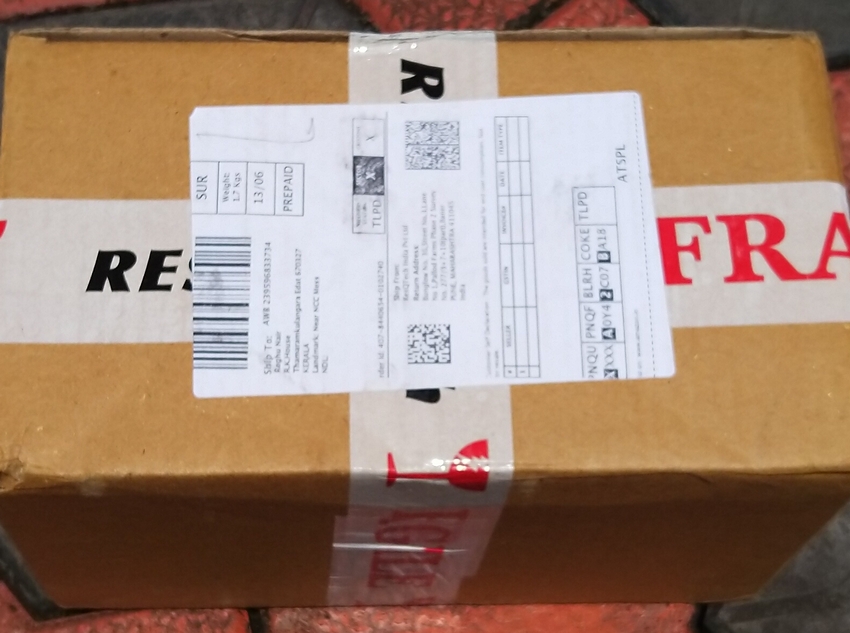 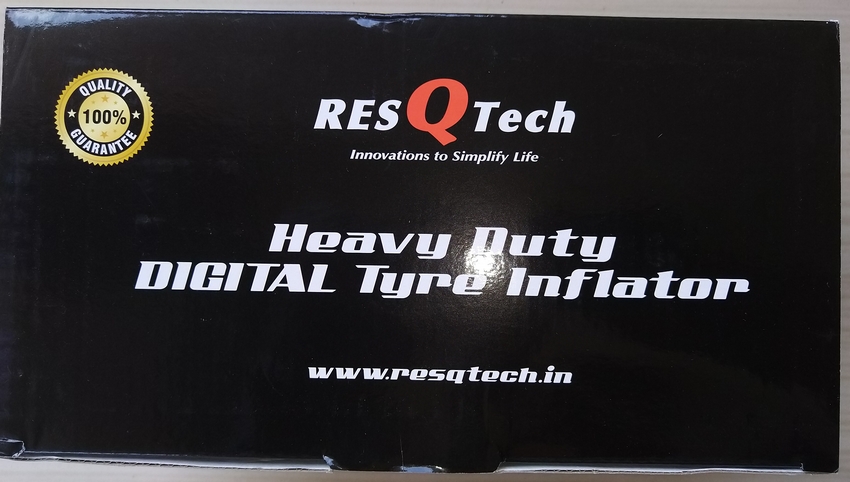 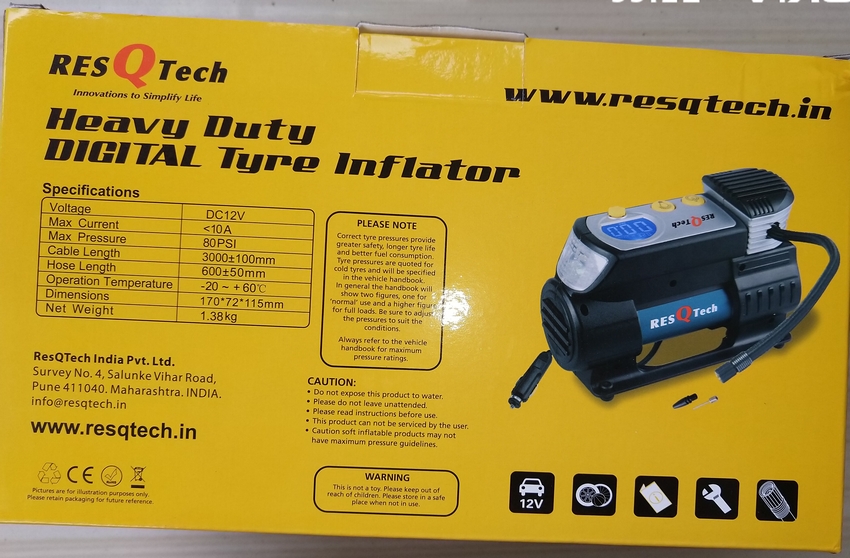 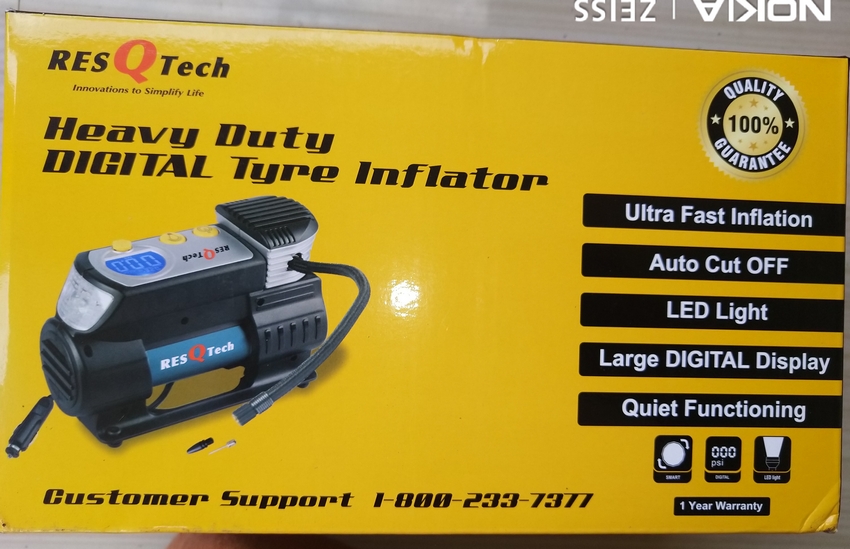 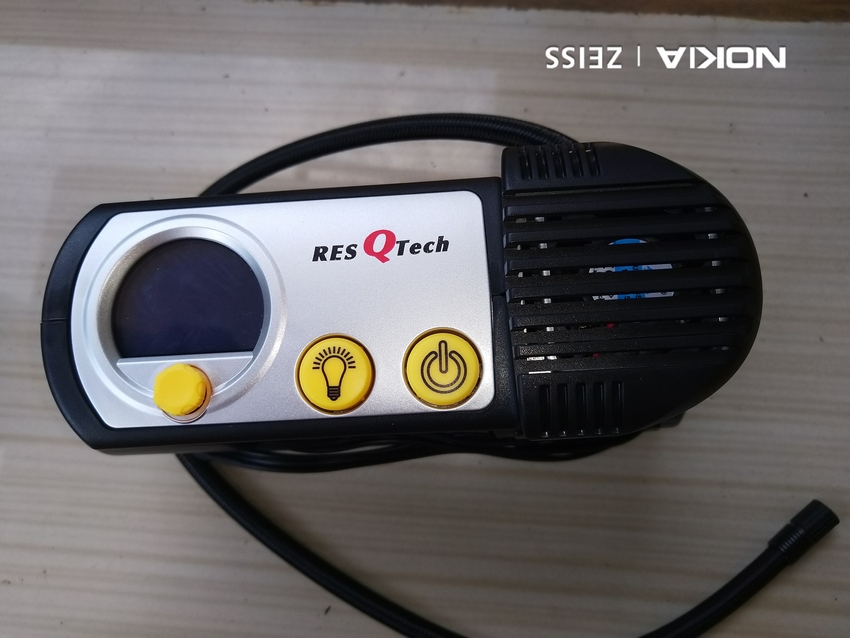 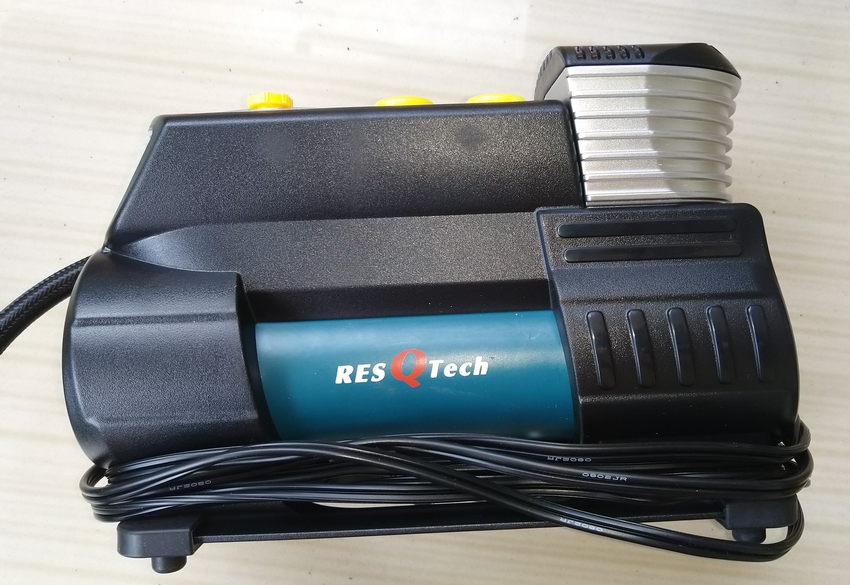 Just comparing the size of the inflator with my old one (Amazon basics) and ResQTech is less in weight and size. So, I can use the same carrier bag which was supplied along with Amazon basics inflator .

Will post some more photos after testing it on my car/scooter tyre and will also share my experience, then

Ok, just checked the inflator on my vehicle tyres. All (Car and Scooter) tyres were showing around 6/7 PSI less than what it required. I filled all required air with this new inflator

Comparing the old one (Amazon basics), the differences I can see with this ResQTech are:

2-Amazon basics inflator needs the car engine to be turn on to get the power on to the inflator. Whereas ResQTech need not turn the car engine ON . So, it is comfortable and convenient to inflate tyres without turning on the car engine

3- Sound: I feel ResQTech sound while the inflator in ON condition is a shade more that the Amazon basics .

4- Rotating knob to set the required pressure on ResQTech is convenient comparing the other one with 'press' button system to set the air pressure.

5- Heating: Even after inflating 6 tyres continuously one after another, there was hardly any heat on the motor. Of course, I need to pump only 6/7 PSI's on each tyre. Don't know how the situation when inflating one or more flat tyre's 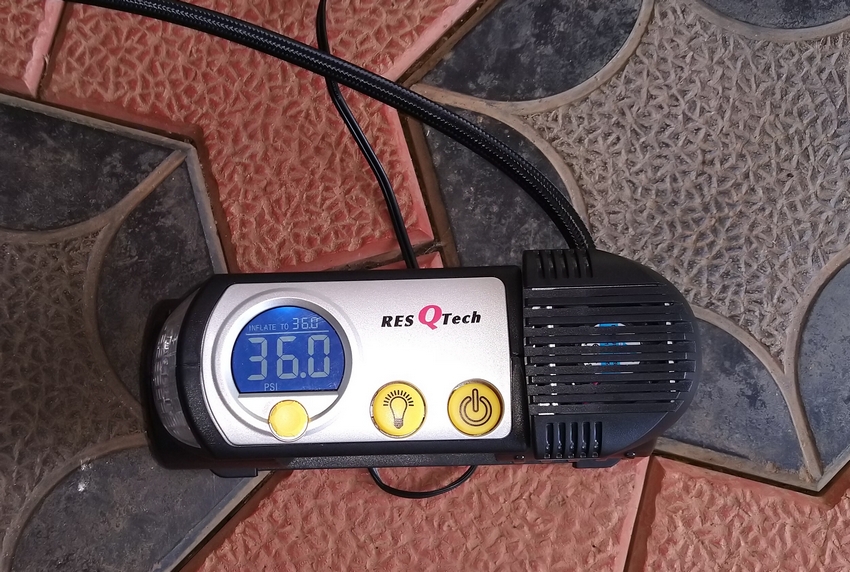 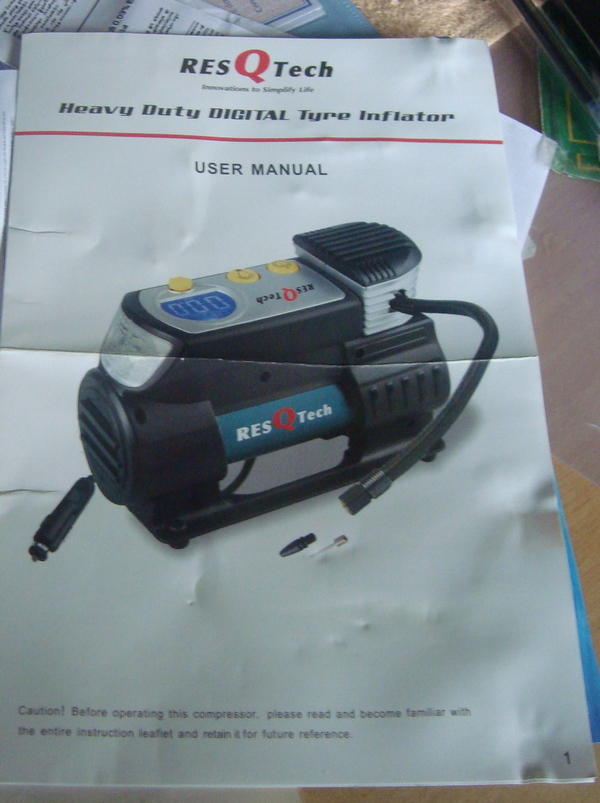 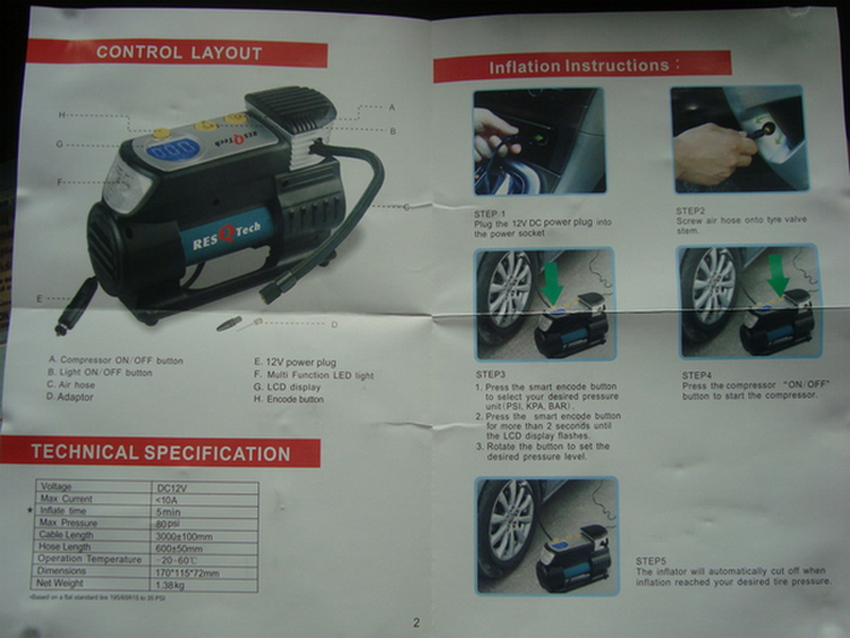 Since this inflator (ResQTech) can be operated without starting the car engine which means the inflator takes power directly from the battery and as such, by any chance the car battery will be affected? Or should I follow the old procedure, i.e. connect adaptor, start the engine and then fill up the air ?

Its always better to Idle the car when using these devices. Not just good for the Battery but also good for the device, as I can see the sound change and motor feels loaded with engine off. Perhaps its not getting enough voltage.

Since this inflator (ResQTech) can be operated without starting the car engine which means the inflator takes power directly from the battery and as such, by any chance the car battery will be affected? Or should I follow the old procedure, i.e. connect adaptor, start the engine and then fill up the air ?
Click to expand...
please always turn on the engine Sir especially if you are filling up from flat or working on all 4 tyres .The battery will drain out needlessly and for peace of mind

My ResQtech Tyre inflator is having problems since last week.
Sometimes, the inflator would start automatically even when no tyre is connected and sometimes it would randomly stop working.
I suspected a loose wire or bad solder somewhere, so I opened it up 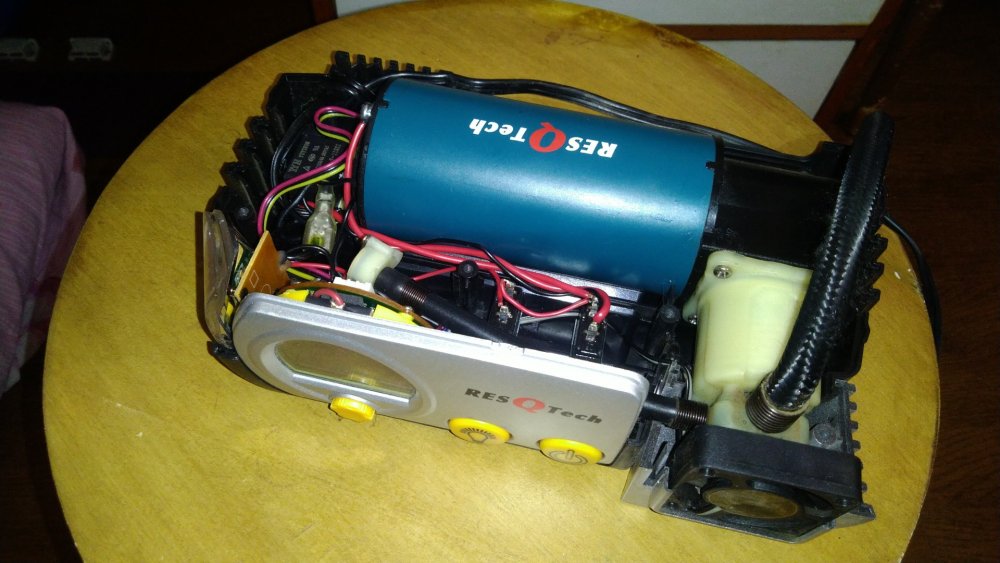 Could not find anything awry. Taped up all the contacts and tied the wires.
Used a little bit of White grease on Moving parts-
Piston, Bore, Shaft.

I have made a video of the servicing process, So I don't have much pics. I will edit & launch a service guide when I get some time. 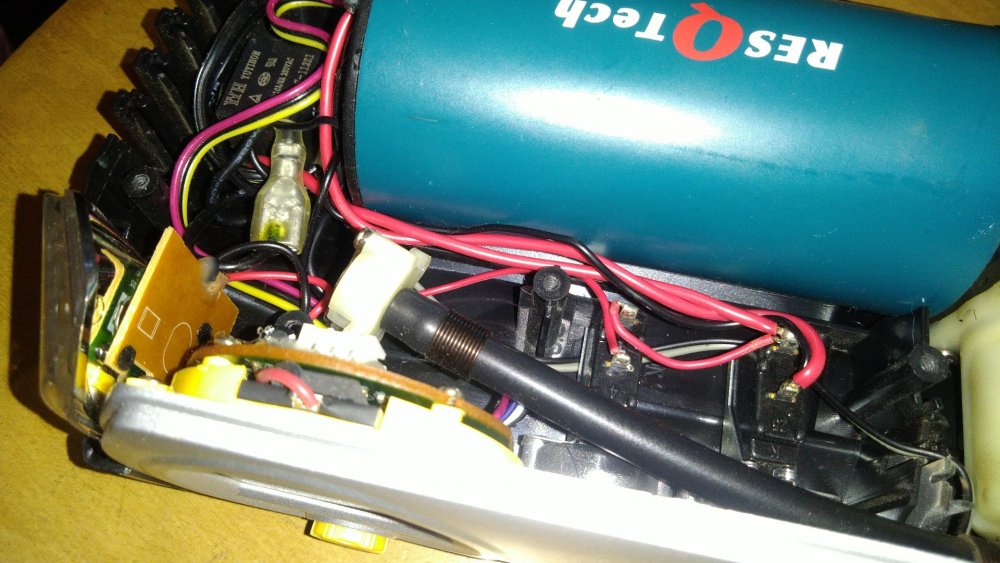 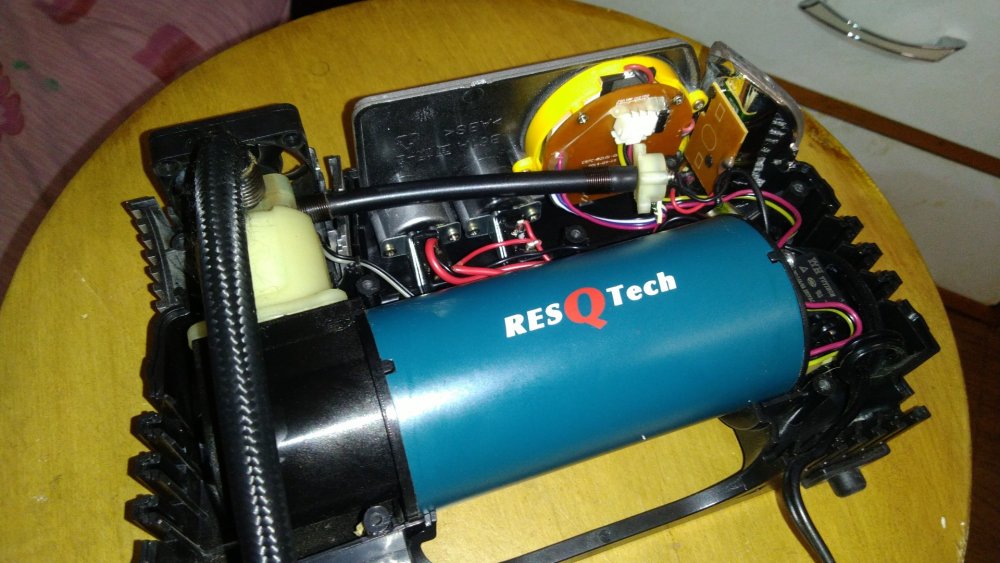 Assembled it back. seems to work normally.

However yesterday it was misbehaving badly. Unable to get any decent use. This time is suspected that power switch itself was faulty.
First thought to drill a hole in the body and add some heavy 10A DC switch. But then ended up doing the simplest of possible mods-
I switched over the motor wires to LED switch, which means inflator still looks visually "Stock"
Now LED & Motor starts at once, A small setback which I don't mind. 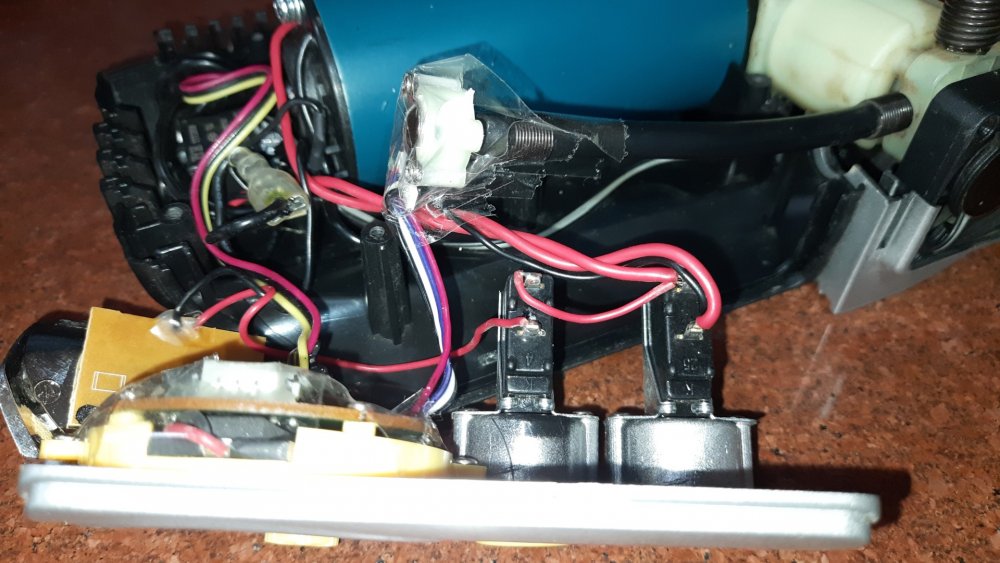 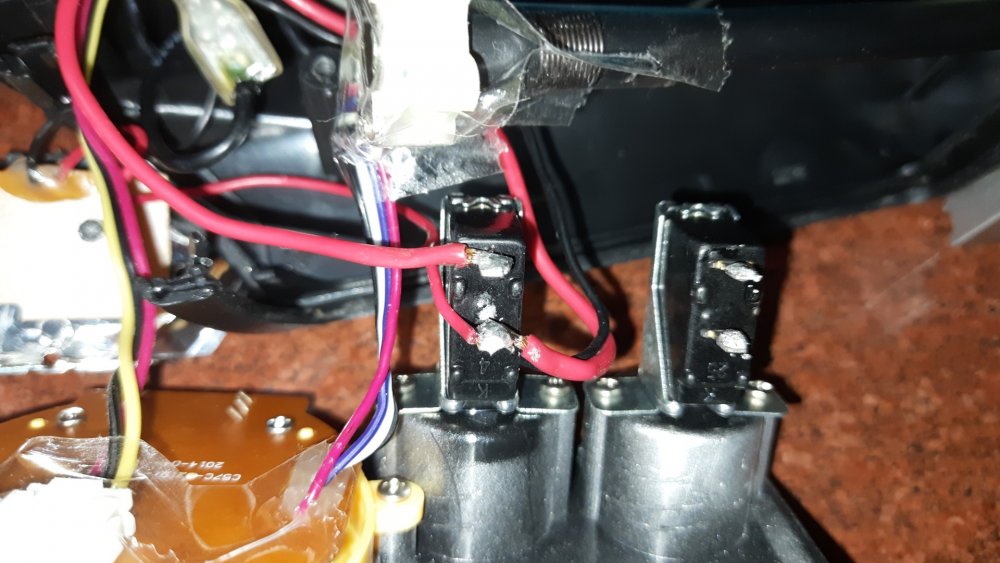 After Inflating a few Safari tyres, I can say that problem is solved.
Last edited: May 1, 2022
You must log in or register to reply here.