Honda made its debut to the Indian Bike Market with 150cc Unicorn, Since then Unicorn has been known for its refined engine and good fuel efficiency but with time this bike seems to have loose the charm, No refreshment or facelift by Honda made the times tough for this bike. However, after years Unicorn went a minor facelift which included nothing but matte black alloys and some graphics which were not very well accepted by the Indian bikers, so finally after a much long wait, Honda had to have change their strategy and launched125cc CB-Stunner which has recently received upgraded looks, followed by the super stylish 110cc CB-Twister. Now continuing the same trend, Honda is ready to dazzle the 150cc segment too.


Design & Styling
CB-Unicorn Dazzler, though this is a Unicorn, but its styling is way ahead of the regular one. From the headlamp design to the rear tail lamps everything has been designed in a manner to compliment the sporty looks of the Dazzler. Headlamp design looks new but not stylish though. I found its resemblance close to that of Hero Honda Hunk. Like the other Hondas, the parking lamp is absent here too. The curvy visor adds a statement to the front looks.

The turn indicators are borrowed from its younger sibling Stunner which looks nice and Instrument cluster goes digital now and is easy to read even when tackling high speeds. This console carries a digital Speedo, clock and fuel meter. Tachometer is analog and big. The display is blue lit and would be a treat for eyes during night rides. To help you record your short trip the Dazzler gets digital trip meter which can be tripped with a push of button.

Moving to the sides, the stylish panels or the cowls blend wonderfully with the tank design. The cowl sports a Chrome plated Honda badge. Come to the rear and you will find not so dazzling scene. The brake lamp is just a redesigned Shine lamp. The rear doesn’t look as attractive as the side or the front profile. On the concluding note, Dazzler can be said to be a Sporty Unicorn.


Engine and Performance
I took out Dazzler on a good highway stretch to see how this Honda performs. Dazzler has the same 150cc engine which powers the Unicorn, but the tuning has changed. While the Unicorn gets a power of 13.3BHP the Dazzler is able to produce 14BHP which is 0.7bhp on par. Though the power figure doesn’t look very different but the improved performance is quite noticeable. The 0-60kph speed is achieved in no time, though it takes time to get to three digit figures. The gear ratios feel perfect. Even at higher RPMs too, the engine doesn’t appears to run out of breath. The highest speed reached was 105kmph, and I believe even 115kmph can be achieved with ease too. Gearbox really impressed with the gear shifts smoother than all the Hondas available. Even with such a good engine response, Honda claims that this bike won’t get thirsty soon with a fuel efficiency of 60kmpl. Dazzler doesn’t have the kick lever on it which means you may have to push start the bike in case the battery charge goes nil. Though, Honda claims that the Maintenance free battery won’t give any troubles till 4-5 years.

Handling and Ride Quality
Looking at the Indian roads I feel the most important factor that affects the ride quality is the suspension. Now just like CB-Unicorn, Dazzler has “Monoshock” suspension which does its work well, but the deep potholes do creep in. The raised handle bar feels quite odd while riding on highways but it’s not much of a problem in city traffic. Overall ride comfort gets better with well cushioned and slightly stepped up seats. The 110/80 section tubeless tire at the rear and 80/100 at the front will never let you run out of grip. Honda Dazzler gets disk brakes on front and rear. I was really impressed with the rear brakes which are quite precise and less prone to slips. Whether its cornering or traffic commuting, Dazzler surely leaves with no complaints. Overall, Dazzler is great on engine performance, looks and fuel efficiency, But the price tag of Rs.72,000 looks is certainly on quite higher level.


Colours:
The New CB Unicorn Dazzler can be bought in the following 5 shades.
Ratings 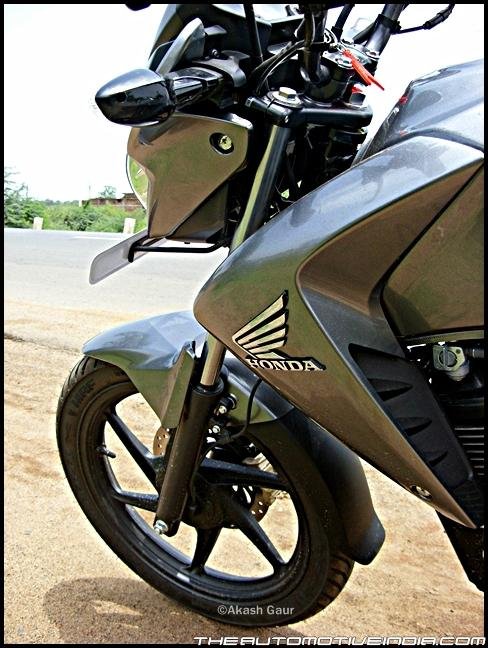 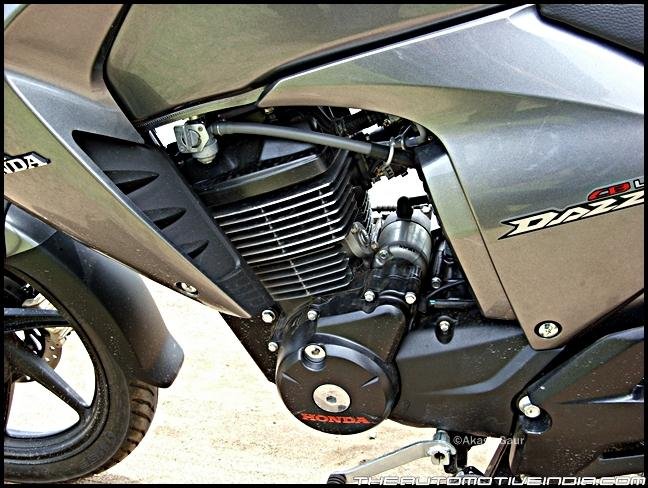 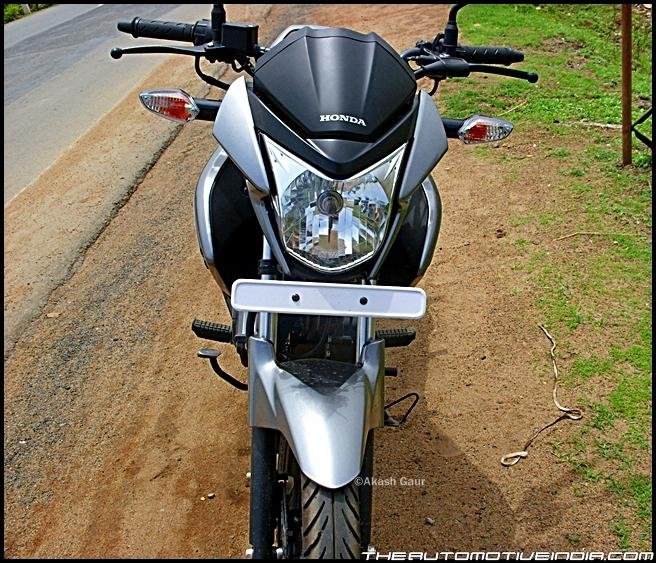 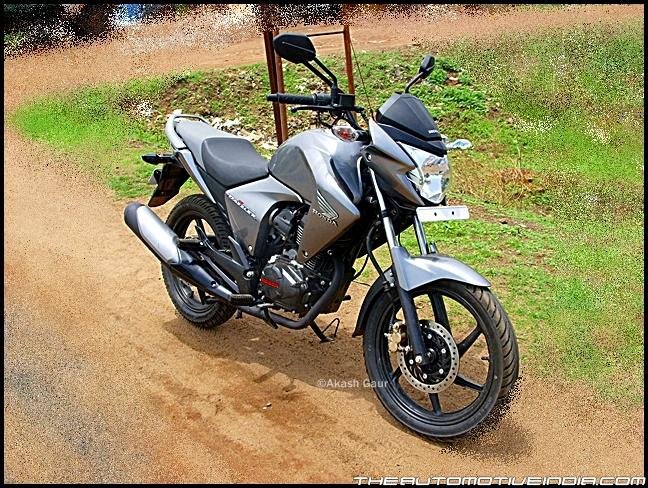 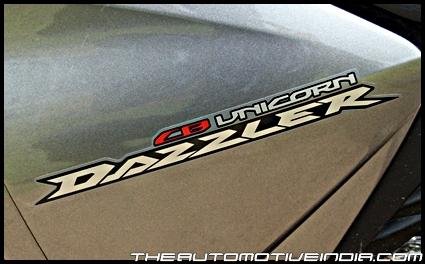 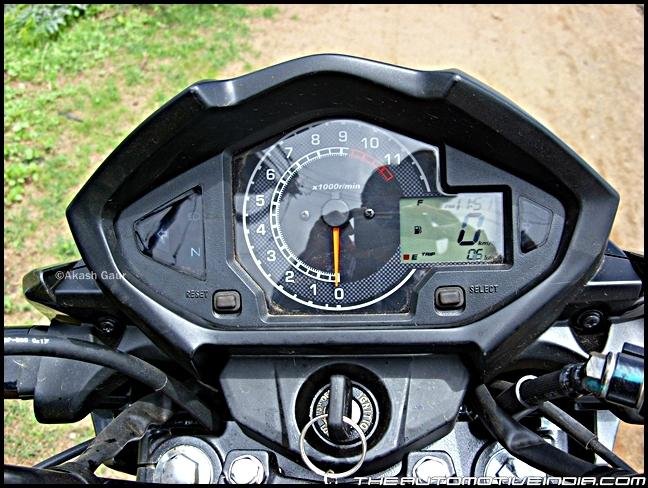 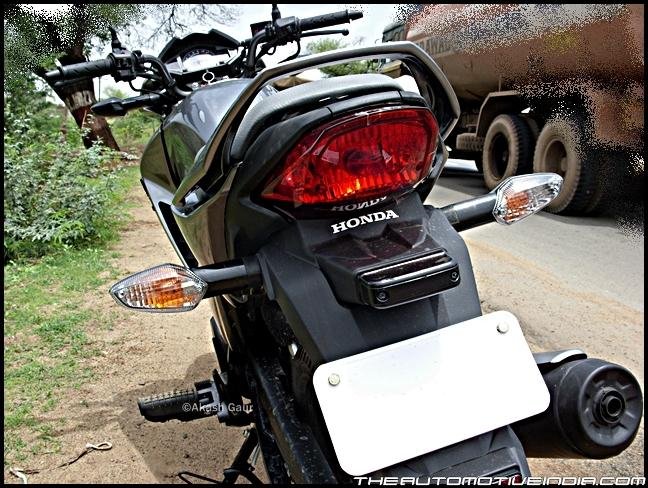 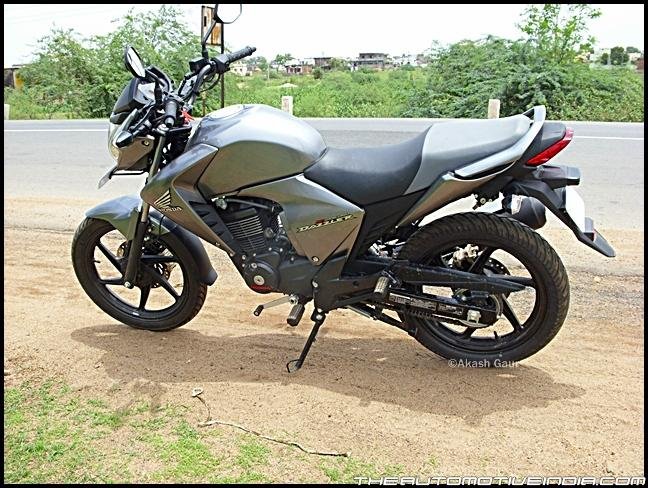 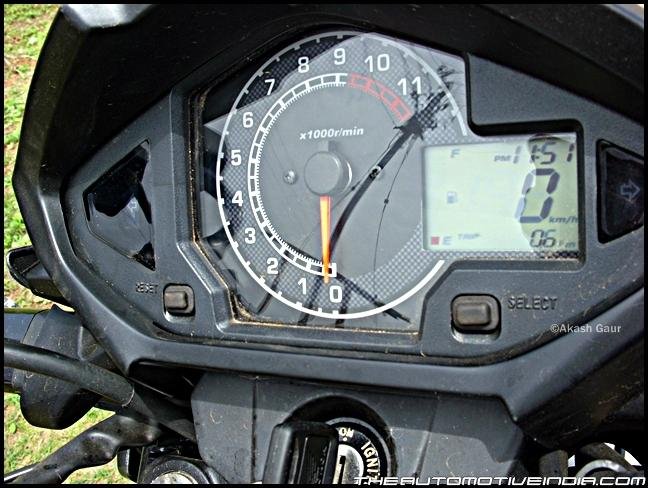 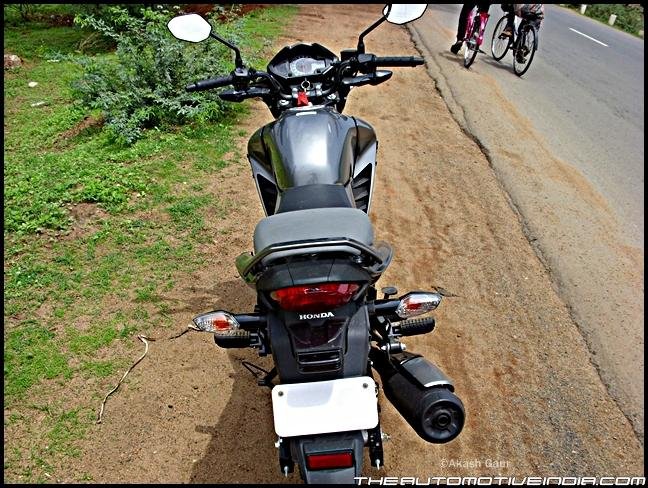 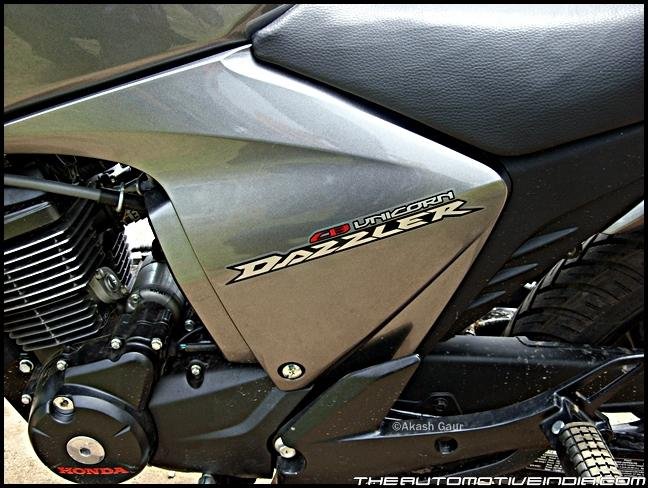 Looks better than previous unicorn. BTW, whats the FE figure of this bike?

Thanks RSM.
Honda claims that Dazzler is capable of returning fe of 60kmpl. So expect a fe of 50-55kmpl in real traffic conditions.

RSM said:
Oh yes.
Nice review buddy.
Click to expand...
Thanks for the words of appreciation.
Btw the thing which i personally liked on this bike is its performance which is quite different from the CB-UNICORN.

Nice detail review. Nice Bike but too high price. Also Punch missing.
Long time pending update from Honda. Something missing in the Dazzler look like patchwork in Unicorn. Still CBF Stunner or Stunner is more good looker.
The headlight is messed up.
It look likes Honda is running Hero Honda way Unicorn's mill is used in HH Hunk, HH Acheiver, HH CBZ Xtreme and now Dazzler. Common Give us something New product Get it 225CC at least. Not VFM model. I am felling it as Jazz for Honda 2 wheeler.
A

Ah, the ugliest bike on the road today.(tie between this and the twister)
And why is honda making such sub-standard bikes.
This will be a disaster as it has no USP.
FZ-16 over this anyday, for me atleast.

@Anwar, AMG- thanks man.
Honda Dazzler cannot be termed as a vfm bike but still it is a good upgrade to the existing unicorn performance wise. High speed handling is a lot better now.

Nice detail review. Nice Bike but too high price. Also Punch missing.
Long time pending update from Honda. Something missing in the Dazzler look like patchwork in Unicorn. Still CBF Stunner or Stunner is more good looker.
The headlight is messed up.
It look likes Honda is running Hero Honda way Unicorn's mill is used in HH Hunk, HH Acheiver, HH CBZ Xtreme and now Dazzler. Common Give us something New product Get it 225CC at least. Not VFM model. I am felling it as Jazz for Honda 2 wheeler.
Click to expand...
I agree with you. IMO Dazzler should have been a replacement of Honda Unicorn. I think the launch of Dazzler may lead to a disaster to sales of one of their bikes, Unicorn or Dazzler. Already Unicorn wasnt selling as many as other 150cc bikes, and now an overpriced version of Dazzler may lead to further worsing of sales.

A nice review, I like the looks of this bike but the price of Rs.72,000, like you mentioned, is quite too much to pay for it.

Drive Safe,
350Z
Click to expand...
Yes 70k is too much for this bike. Even the specs arent as attractive. As for looks i would any day prefer FZS over this.

Nice pics an review! waiting for more bikes reviews in TAI!
You must log in or register to reply here.