Using artificial intelligence, internet giant Google is developing a car that can drive by itself, which experts say could transform society as profoundly as the worldwide web.Seven test cars of Google have driven 1,000 miles without human intervention and more than 1,40,000 miles (around 2,25,308 kilometres) with only occasional human control.

The car project of Google uses artificial intelligence that can sense anything near the car and mimic the decisions made by a human driver. The device atop the car produced a detailed map of the environment which was used for safe navigation. One test car drove itself down Lombard Street in San Francisco, one of the steepest and most curvy streets in the US. The only accident, engineers said, was when one Google car was rear-ended while stopped at a traffic signal. Autonomous cars are years from mass production, but technologists who have long dreamed of them believe they can transform society as profoundly as the internet has.

Robot drivers react faster than humans, have 360-degree perception and do not get distracted, sleepy or intoxicated, the engineers argue. They say the technology could double the capacity of roads by allowing cars to drive more safely while closer together. Because the robot cars are less likely to crash, they could be built lighter, thus reducing fuel consumption. The car can be programmed for different driving personalities, from cautious, in which it is more likely to yield to another car, to aggressive, where it is more likely to go first. The project is the brainchild of Sebastian Thrun, the 43-year-old director of the Stanford Artificial Intelligence Lab, a Google engineer and co-inventor of the Street View mapping service.

Besides, the team of 15 engineers working on the current project, Google hired more than a dozen people each with a spotless driving record, to take the driver's seat, paying $15 an hour or more. Google is using six Priuses and an Audi TT in the project. The Google researchers said the company did not yet have a clear plan to create a business from the experiments.

Man , i always prefer a car as its fun to drive , not just because of its comfort!


I don think this will be practically possible in a country like India where traffic rules are hardly followed.

I am against this?
As i love driving, and it's preventing me.
I don't want to rely on sensors & cameras.

I don't know what Google is upto. It may enable it to 'commute' from one point to another. It will never be able to 'drive'. Driving is something which is something very very close to petrol heads. Starts from a little feeling of knowing how to drive, the happiness while hearing the engine roar et all. Nothing beats the 'experience' of it.

Yeah , the driving fun will be lost , but i suppose accidents will be minimised , top speed will be tested only by the manufacturer (google driving will follow the speed limit).

I saw a detailed report of this Google car. Honestly i fail to understand what google is upto.

Quite nice to know that Google is also stepping into automotive sector. Now as far as this car is concerned, when there are unmanned aircrafts flying around, a driver-less car is not a surprise. Driving a car is sure a fun of it’s own and something which cannot be replaced with anything else but then there's a different class as well who prefer to be chauffeur driven and this is where this car might be perfect match. Whenever I read about innovations such as this (Asmio Robot), I only realize that eventually we are entering into a robotized era which was only taught in tales until sometime back.

Akash said:
I saw a detailed report of this Google car. Honestly i fail to understand what google is upto.
Click to expand...
hey buddy any pics ? hope dont resemble to google doodle!

The move came after officials rode along on drives on highways, in Carson City neighborhoods and along the famous Las Vegas Strip, the Nevada DMV said in a statement.

The Nevada legislature last year authorized self-driven cars for the state's roads, the first such law in the United States. That law went into effect on March 1, 2012.

Google's self-driven cars rely on video cameras, radar sensors, lasers, and a database of information collected from manually driven cars to help navigate, according to the company.

Google's self-driving cars have crossed the Golden Gate Bridge and driven along the picturesque Pacific Coast Highway, according to the company.

Autonomous vehicles are the "car of the future," Nevada DMV director Bruce Breslow said in a statement. The state also has plans to eventually license autonomous vehicles owned by the members of the public, the DMV said.

Legislation to regulate autonomous cars is being considered in other states, including Google's home state of California.

"The vast majority of vehicle accidents are due to human error. Through the use of computers, sensors and other systems, an autonomous vehicle is capable of analyzing the driving environment more quickly and operating the vehicle more safely," California state Senator Alex Padilla said in March when he introduced that state's autonomous car legislation. 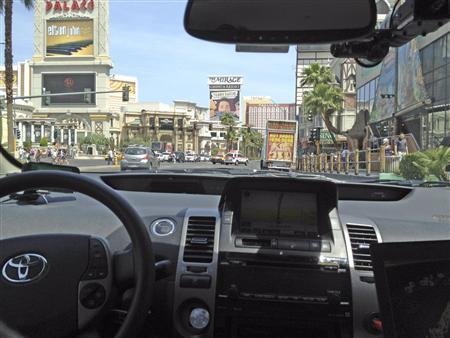 For country like india, google can provide automated fine system. If you skip the signal, it will sense the card(fixed in the no plate) and update the system and sends a email & sms to the RC holder to pay the fine. This might be a simple project for IT dons like google but it will help us to improve the traffic discipline.
V

We're growing more optimistic that we're heading toward an achievable goal _ a vehicle that operates fully without human intervention
Click to expand...
The company has said its goal is to get the technology to the public by 2017. In initial iterations, human drivers would be expected to take control if the computer fails. The promise is that, eventually, there would be no need for a driver. Passengers could read, daydream, even sleep _ or work _ while the car drives.
Click to expand...
Google says its self-driving cars are motoring along: they can navigate freeways comfortably, albeit with a driver ready to take control. But city driving _ with its obstacle course of stray walkers, bicyclists and blind corners _ has been a far greater challenge for the cars' computers.
Click to expand...
While the car knows to stop, just when to start again is still a challenge, partly because the cars are programmed to drive defensively. At a four-way stop, Google's cars have been known to wait in place as people driving in other directions edge out into the intersection _ or roll through
Click to expand...
Google: Driverless cars are mastering city streets | ET Auto
Last edited: Apr 28, 2014
V