Well guys here I am with another travelogue. And this time it is Fairfax (VA) to New York. Well New York is a place guys you can visit as many times as you want and still you don’t get bored and it is huge, amazing and beautiful.

So yesterday I was sitting with my cousin and just talking about our last trip to New York which we did back in 2009 but that was a very short trip and we couldn’t do a lot. So here goes the conversation:

Me: All of a sudden and out of nowhere I go “Let’s go to New York”
Cousin: looks at me with a wicked look and goes

“Thank god we were not talking about California coz that ***t is 3000 miles” and we both started laughing.
Cousin: (After 2 mins): So how are we going??
Me: Now I started laughing and I said I’ll DRIVE.

Cousin: Right, why did I even asked you that question.

So that’s how this trip happened. So I called my other 2 cousins and asked them if they wanted to join. And they were just down for the trip as soon as they heard that it’s New York. So now we were 4 people (all cousins).
We all met at my cousins college in Fairfax (VA) around 5 PM and left for New York by 6:30 PM. Since it was traffic hours we did get some traffic for the first 30 mins but after that it was all clear and my civic was cruzing as always on the splendid highways. It took us 4 and half hours to reach New York so we were there by 11:00 Pm. We did make a small stop in between for about 10-15 mins for some snacks and drinks. And I almost got lucky twice with the cops on the speeding part.

There is an expressway called “New Jersey Turnpike” and you drive almost 60-80 miles on that. So the speed limit is 65 mph on it but at places the speed limit was going down to 55 mph and then back to 65 mph. So I was tired of doing this up and down and was driving at 70-75 mph. And guess what even at that speed cars were just overtaking me and zipping off. So first time I got lucky when I was doing 75 and all of a sudden speed limit goes from 65mph to 55 mph and there was a cop in his Dodge charger with his speed gun pointed on the road but by the time I reduced my speed to 60 mph. And the second time I got lucky when I was doing 90 mph just for 2 minutes since everyone in the car wanted me to change the speedo to kms from miles and touch 150 kmh. So I did that and as soon as I came down there was a cop in a DAMM Corvette. So overall it was fun trip from Fairfax to NY.

So once we reached NY we checked into the hotel and then went to the Time Square. It’s an amazing place guys, one of it’s own kind. It has a lot of Broadway Theaters and SUPERSIGNS which make Time Square amazing. So we spent the rest of the night at Time Square and had food at the famous Hard Rock Café. And they have their branches in Mumbai and I guess Delhi as well.

Waiting for more with lot of pics.

mukeshus said:
Waiting for more with lot of pics.

Click to expand...
Yes sir definitely. But right now I am just busy roaming around in NY. Won't be as to post pics until Monday morning.so gotta wait a little bit.

good trip man awaiting for photos and rest part of the story.
waiting till monday

Click to expand...
Thanks buddy the trip was really fun and pics will be up by tomorrow.

and experience NY
Click to expand...
That's true buddy, pics do make you feel that way and right now I am on my way back home. So will try to post pics tonite if possible otherwise they will be up by tomorrow for sure. Just bare with me ;-)

visran said:
Well written TL even Bangalore has the famous Hard Rock Café. where the pic's buddy?
Click to expand...
Thanks buddy and yes they do have a branch in Mumbai and it's an amazing place to go.. Pics will be up tonite or by tomorrow. ( I hope you know I am 9.30 hrs behind your time );-))

Will be great if you can paste a map. For us who have never visited the country, it makes things easy.

oh man can't wait to see those pics of NY, Civic, Times Square.
I want to see the corvette pics as well.

Your write-up shows how much you enjoyed in the trip. Please post the pics asap.

Must have been one hell of a trip. Please post the pics asap bro. Also, very crisp write-up.

Will be great if you can paste a map. For us who have never visited the country, it makes things easy.
Click to expand...
Definitely buddy. And it makes sense as well.

manjoo said:
oh man can't wait to see those pics of NY, Civic, Times Square.
I want to see the corvette pics as well.
Click to expand...
Pics will be up by tonite. And buddy i didn't take the picture of the corvette due to the speed of the car and actually you don't get time to take a pic as it is a matter of seconds only because by the time you see there is a cop you are gone. They hide at certain spots with their speed guns where no one can see them until and unless he is very close.

rnharish said:
Your write-up shows how much you enjoyed in the trip. Please post the pics asap.
Click to expand...
Thanks buddy and pics on the way.

freakdude said:
Must have been one hell of a trip. Please post the pics asap bro. Also, very crisp write-up.

freakdude.
Click to expand...
Yes it was indeed a fun trip actually NY is always a fun trip.

BTW: pics will be there by tonite.

Day 2:
We woke up around 10 am the next day and left our hotel by 12:00 PM. Went to a coffee shop had a coffee which we really needed to get over the hangover from last night (Thank’s to Hard Rock Café, nice place, nice food and nice drinks). Once we were done with our breakfast we left for Battery Park as we wanted to see the Statue of Liberty. You need to take a Ferry (Boat) from Battery Park to Ellis Island where the Statue of Liberty is situated. So we took a train from our hotel to Wall Street and from there we walked all the way to Battery Park. But when we went to the ticket counter we were shocked to know that they were not selling any more tickets for the ferry. On asking them why? They said that they have a bad weather warning (Strom Warning) and that’s why they cannot sell more tickets for the day. So we had to drop our plan and yes we were bit upset. By now we all were half exhausted since it was pretty hot and after all that long walk from the wall street. So we took some drinks and snacks and sat on the water front and relaxed for a while.

After that we decided to go to SOHO. So we took a cab from Battery Park to SOHO. It’s the most unique shopping area of the world. It includes shops like small art stands to the top high end boutiques of the world. So we spent couple of hours there and then AGAIN a shocker to our plan RAIN. So we waited for a while thinking it would stop BUT it didn’t. So we decided to go to a sports bar/restaurant as we all were hungry and didn’t mind having couple of beers after food since it was raining outside. Then one of my cousins (who lives in NJ – New Jersey) and her friend also joined us and we spent a wonderful time together.

So we decided to go with my cousin to New Jersey since we couldn’t do much anyways as it was raining. So we picked our car from the hotel parking lot and left for New Jersey. After reaching her house we got dressed up and left for a party. We went to W yes that’s the name of the hotel and it has bar/lounge/club and is a very known place as a lot of celebrities visit this place. You need to have your name on the guest list to enter but our cousin had some good connections and we were in after waiting for 5 minutes. And soon as I got in DAMM the view was amazing from the bar you could see the entire new York city from there. I couldn’t take any picture as it was not allowed. So that was the end of day 2.

Day3
Woke up late again with a slight hangover..:-). I took shower and went to the water front close to my cousin’s house, walking distance and took some pictures as the view was just amazing. After that we left for Philadelphia but got stuck in traffic as there was an accident so by the time we reached Philly most of the attraction points were closed. So we just had food took some nice pics and left back for Fairfax.

My Advice: Anyone planning to visit New York, have the plan ready what you want to see, where you want to go. And take the subways, best mode of transportation in New York because driving in New York is crazy and you don’t get parking easily. So you end up parking in the parking garage which is bit heavy on the pocket. You may end up paying $50-$100 in a day just for parking. So the best way is to take the subway. And New York has the best subway system in the world. You can get a $15 pass for the entire day and use subway/bus as many times as you want in that particular day.

That's the Cafe/Bar o was talking about. 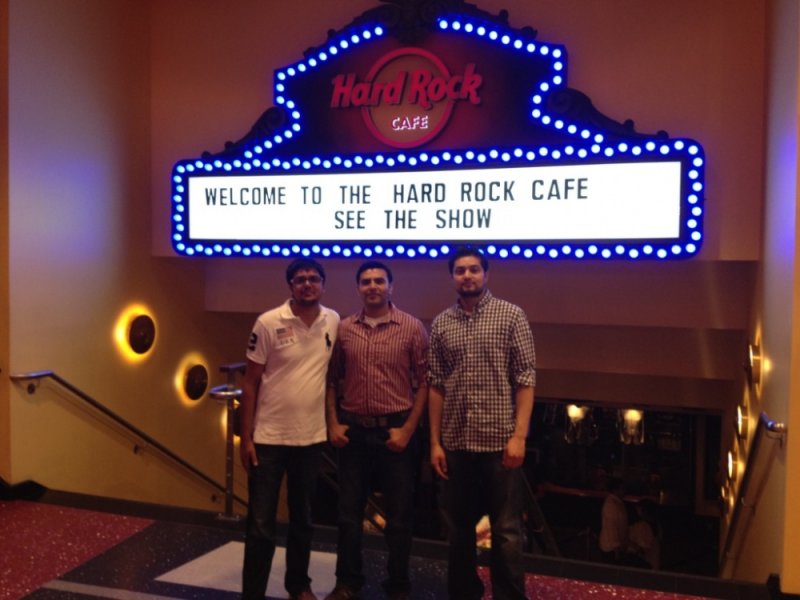 They had these TV's and they were showing live picture from their branches around the world. 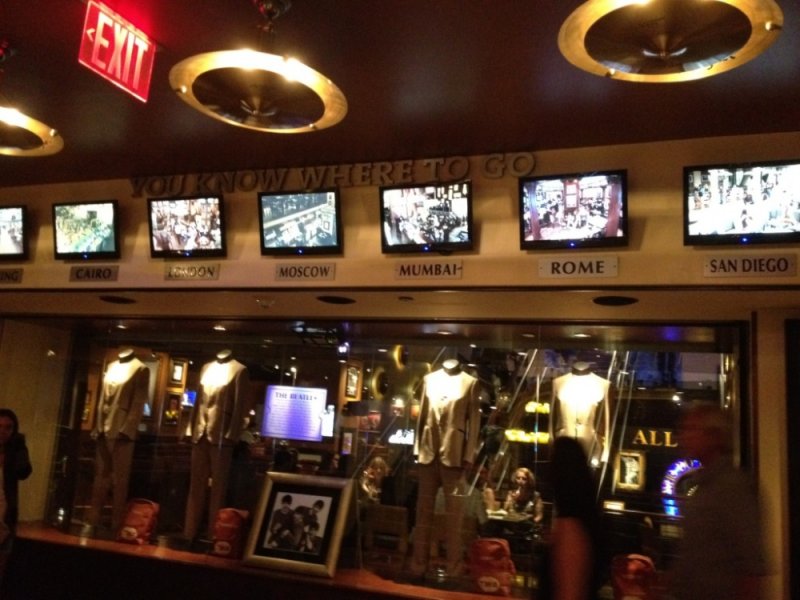 That's me and my cousin 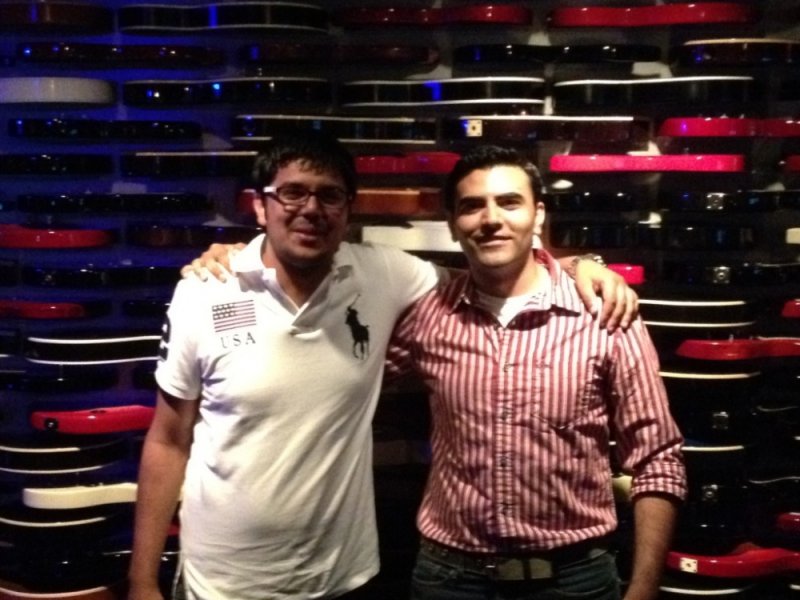 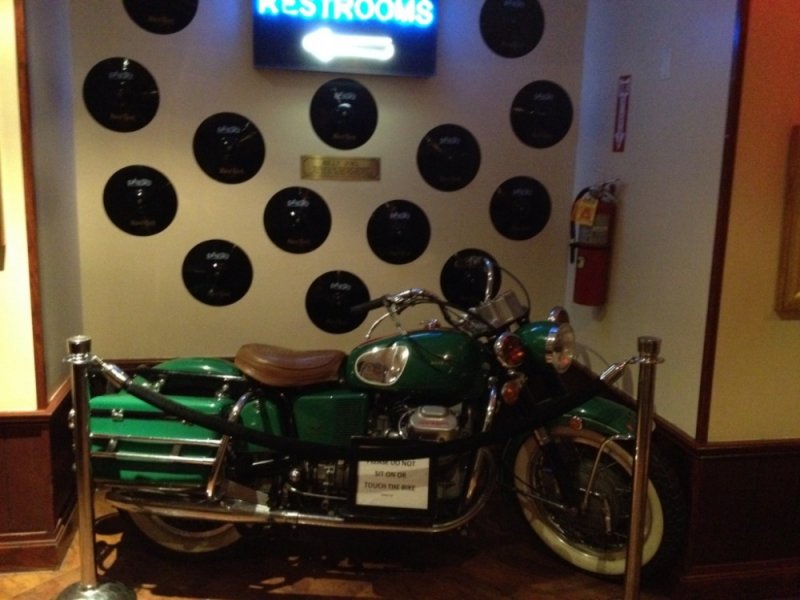 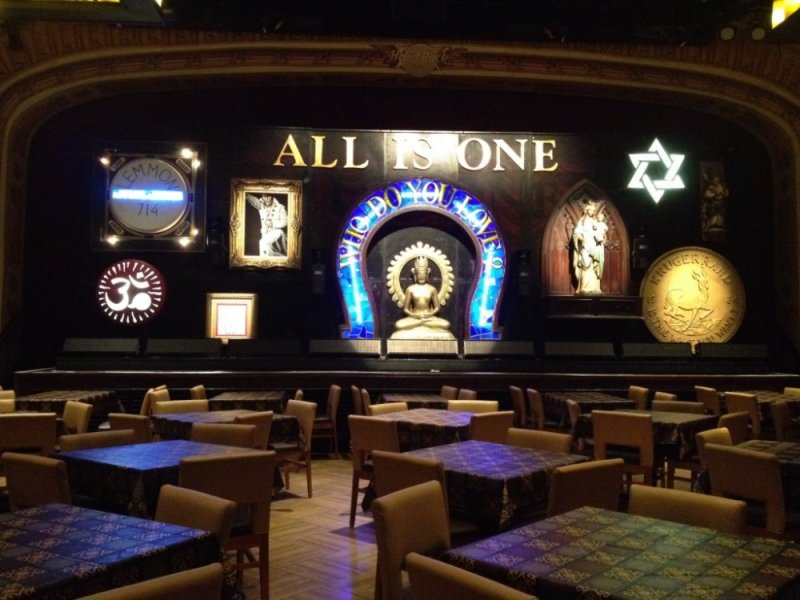 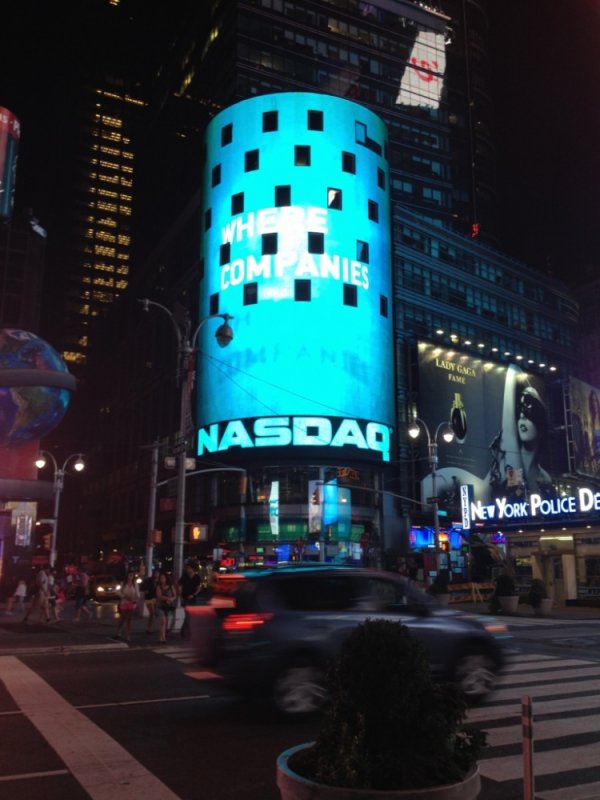 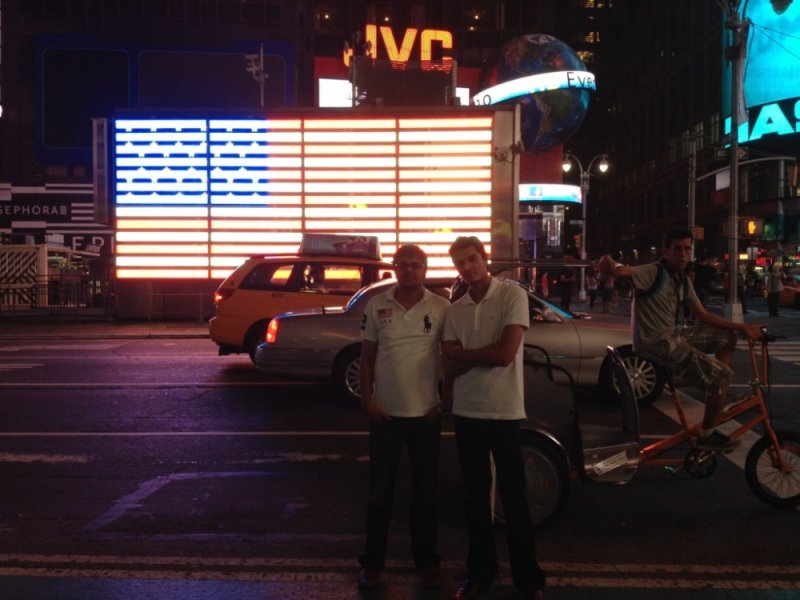 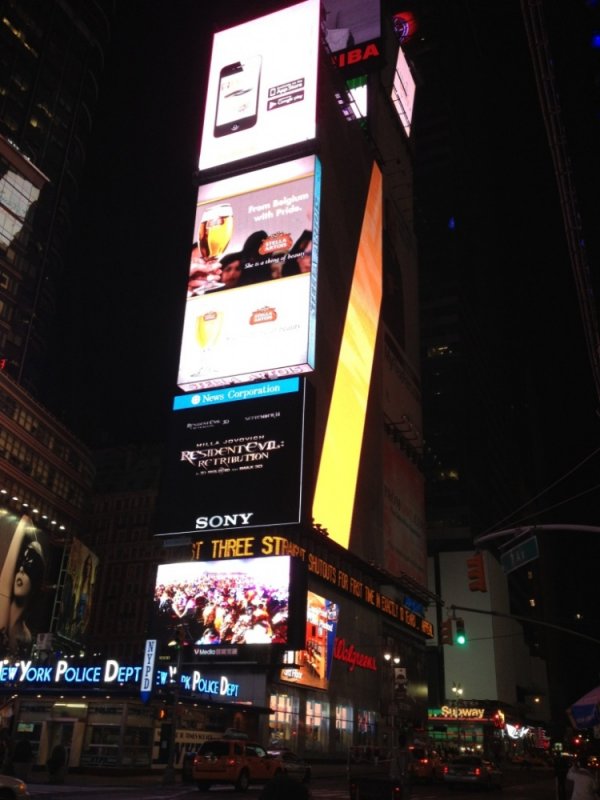 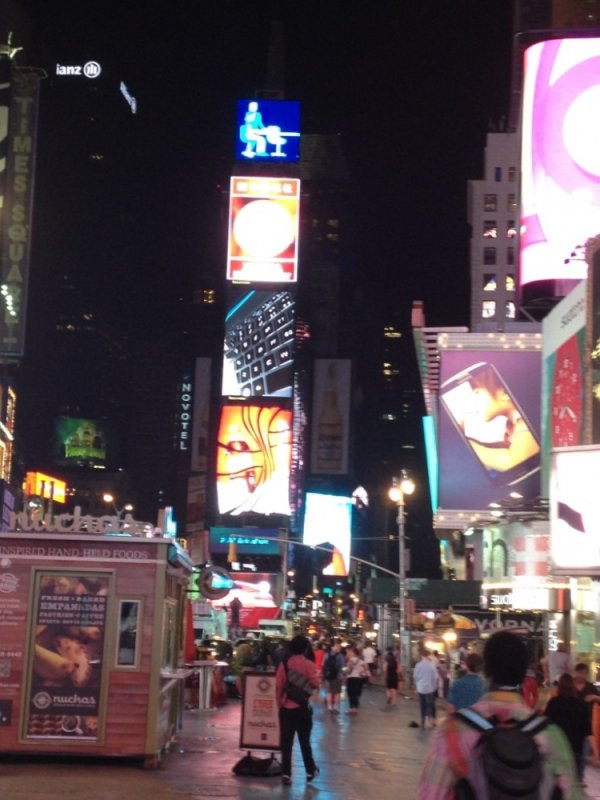 This was a wine/liquor shop. And it had probably every liquor/wine in the world present in the shop. 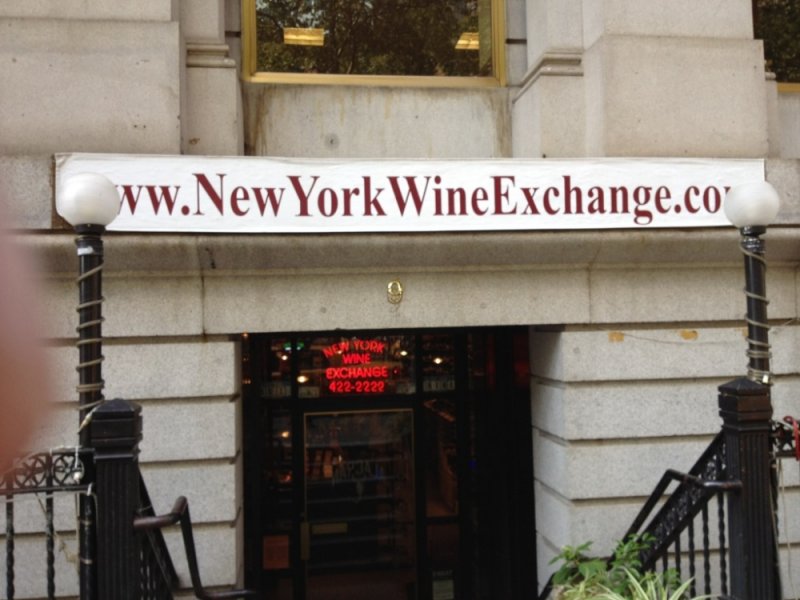 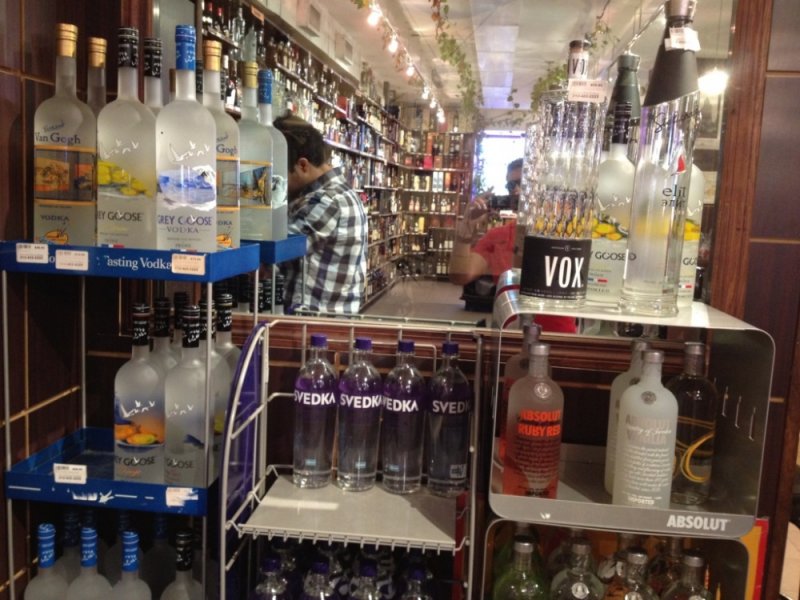 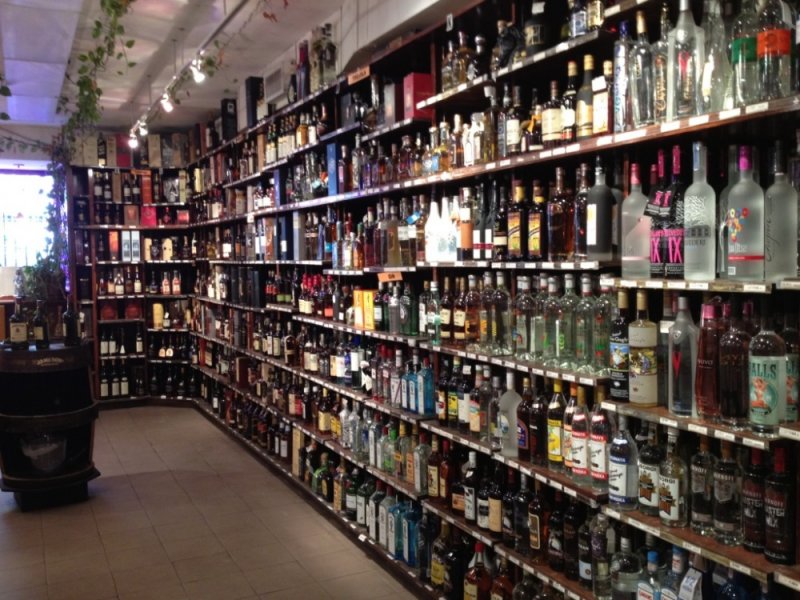 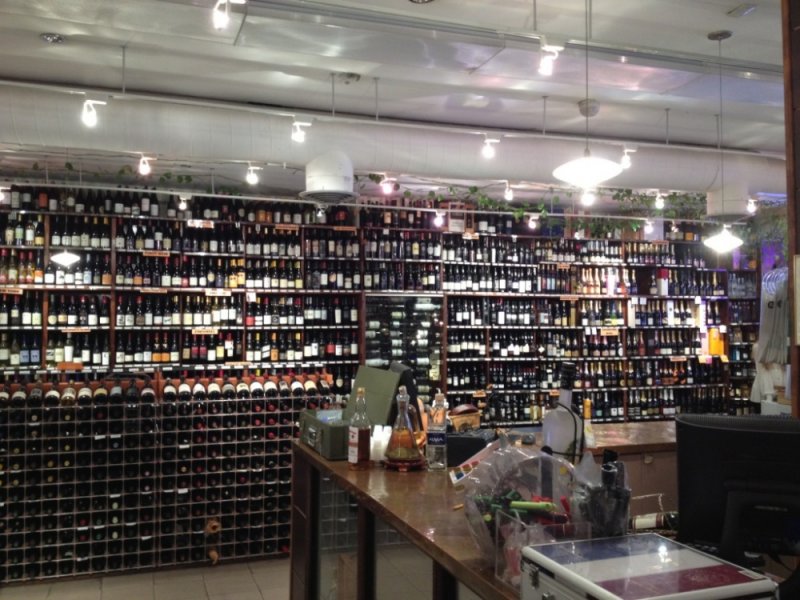 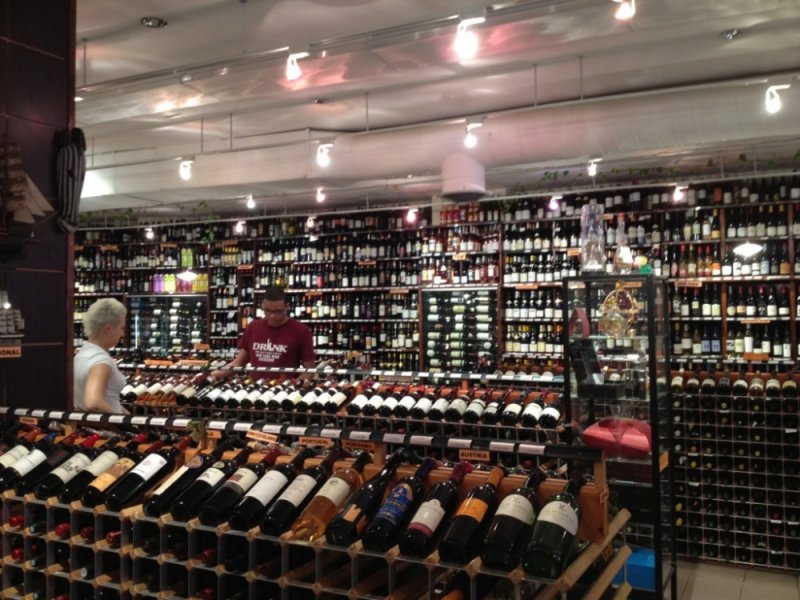 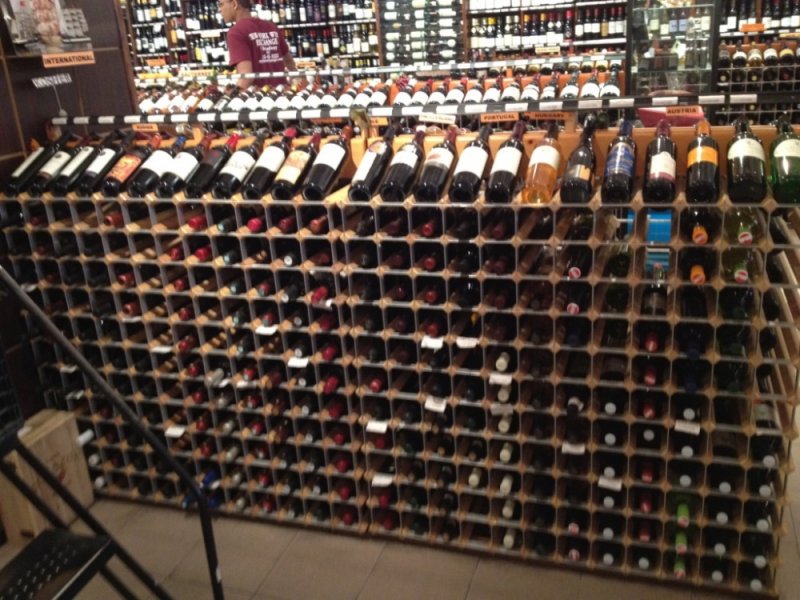 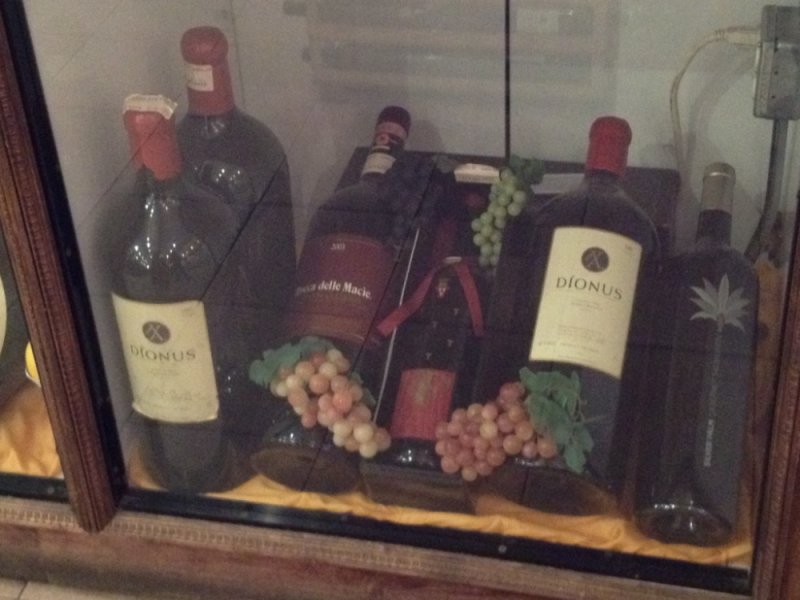