Honda has officially revealed the 2010 Honda CR-V, a facelifted model of the company's popular SUV. The new vehicle gets renewed styling, as well as a new engine choice.

The engine, a "cleaner, more powerful 2.2-litre diesel," according to Honda, is an i-DTEC model featured on the current Accord. It generates nearly 148 hp, an increase of 10hp from the previous unit available. Maximum torque is also improved to 350 Nm. A new automatic transmission will also launch with the car as an option.

A full range of standard equipment is available, even if you get the base SE trim level. That unit comes with a/c, heated mirrors, and the 17-inchers, while a step up to the ES trim gets practical luxuries, like 10-spoke 18-inch alloys, dimming rearview mirror, USB port, reconfigured cargo areas, and electric folding mirrors, as well as heated leather/Alcantara seats.

Up one more level to the EX, and you will find yourself watching the road light up with the HID Xenons, while sitting comfortably in the eight-way power seats. Body colored bumpers also appear on this model, along with a glass roof, rain sensors, and a DVD sat. nav.

Althought the 2010 Honda CR-V facelift will get a formal introduction at Frankfurt, do not expect to see the vehicle's specs and pricing next week. Honda says those bits of information, as well as a market release date, will be announced by the automaker later in 2009.
Source: Honda

Denom said:
Up one more level to the EX, and you will find yourself watching the road light up with the HID Xenons, while sitting comfortably in the eight-way power seats. Body colored bumpers also appear on this model, along with a glass roof, rain sensors, and a DVD sat. nav.
Click to expand...
that means no body coloured bumpers in SE & ES? sad.

Hmm....Seems to be impressive.
But what alll are the main changes from Exteriors?
Any pics of the car?

Also, I think we can continue all the updates & Launches on Frankfurt motorshow in this thread itself.

thanks for the pics denom. updates are indeed very MINOR!
the car still looks unimpressive to me for its 25-30 lakh price tag.

I think CR-V is nearing its end, even this minor facelift won't help much. The price is the prime reason. How did Honda price it above 25 lacs, while its competition is lying around 22 lacs.

What is the monthly sales of CR-V after this price increase?

Oh!Thats almost No such major change from outside.
I expected atleast refreshed head and tail lamps.

Crazy cat said:
I think CR-V is nearing its end, even this minor facelift won't help much. The price is the prime reason. How did Honda price it above 25 lacs, while its competition is lying around 22 lacs.

What is the monthly sales of CR-V after this price increase?
Click to expand...
Price of honda CRV PETROL starts from 27 lakhs & ends at 29 lakhs, on-road in mumbai. diesel will be more expensive.

The price of CR-v is rocket high.

Are you sure the sales was 0 in April, May and June?

The sales figures were taken from another website. So i cannot be too sure.

SUV facelifted???? i don't see anything.... or whether the face lifts are hidden????

In Africa the Toyota Land Cruiser range has such a reputation for conquering the toughest terrain that it's called the King of Africa. His royal majesty soon turns 60 years-old but does not seem to be slowing down one bit judging from this all-new model announced for the UK market. Based on the Prado platform rather than the Land Cruiser sold in the US and some other markets the new vehicle is said to be extremely capable and yet comfortable.

Toyota says this is the most technically advanced Land Cruiser ever made, and one of the most capable if not the most capable off-road vehicle in its class. The SUV's new Multi-terrain Select system allows the driver to dial in the type of terrain for enhanced system self adjustment effectively giving more efficienct power delivery and traction. Extra driver assistance comes from four cameras that monitor the situation all around.

Additionally the new Kinetic Dynamic Suspension System (KDSS) adjusts the front and rear anti-roll bars for optimised on and off-road performance. The electronically controlled rear air suspension system has an auto-levelling function and switchable height control function. The wheels are either 17-inch or 18-inch and come rolled inside 245/70R17 or 265/60R18 tyres respectively.

The UK market will offer the Land Cruiser exclusively as a 5-door model with seven seats while other European countries also get a 3-door model and a 4.0-litre V6 Dual VVT-i petrol engine.

Inside the features list is as long as the car's 2.79m wheelbase. The left and right hand seats for instance, can be raised and lowered independently, using the Toyota Easy Flat system. Other features included are USB ports, a 14-speaker JBL Synthesis Premium Surround Sound System, a Hard Disc Drive (HDD) navigation system and a multi-information switch on the steering. 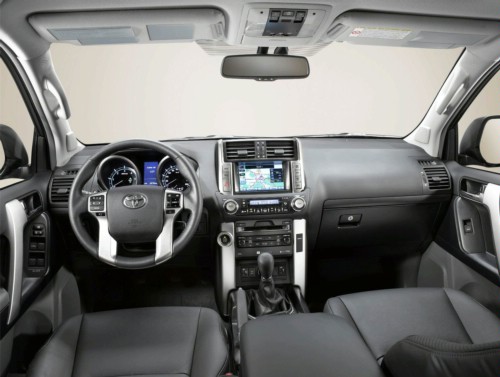 
“Mark your calendar for 09.15.09. Immediately following the highly-anticipated unveiling of e-Tron at the Frankfurt Motor Show, Audi will release videos and photos exclusive to our fans on Facebook,” says Audi e-Tron’s webpage on Facebook. This exclusive page is hosted especially for the critics and autophiles alike. To access the webpage, Click Here!

E-Tron is one of the most anticipated models at the Frankfurt Auto Show. Auto lovers from around the world are flocking down to see the electronic high performance car from Audi. Audi has left everyone guessing as to why the company is launching an electric vehicle when total numbers of EVs registered in Germany are only 1500 which is 0.035% of the total vehicles registered in the country.

“Electric cars reduce the dependence of transportation and the economy on oil. They produce no direct exhaust emissions and thus ease the local burden on the environment,” says Audi. The company sees the greatest challenge as the integration of the energy storage system. Acceptable range and performance requires a heavy battery that takes up a lot of space.

the prado looks ugly to me! as if its on stilts/high heels! look at the huge gap between the wheels & wheel well.
You must log in or register to reply here.