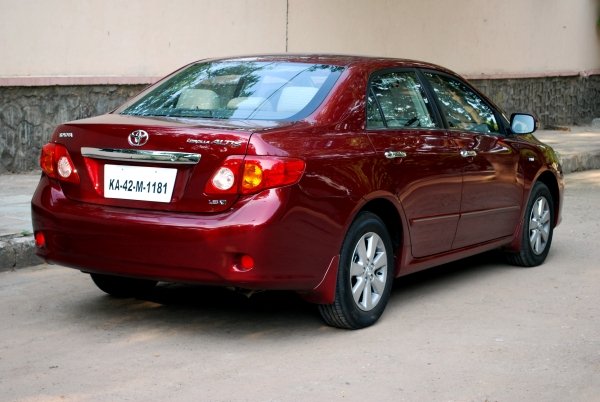 The Toyota Corolla and then the newer Altis has seen plenty of competition over the last few years in the segment and to re-affirm their commitment to the environment they developed the clean and efficient Altis CNG last year, which is only sold in the national capital city and Mumbai. (Regular readers will remember that we broke the news first on our site when we got up close and personal with a CNG test car).

Now, they’re finally going to consider launching the diesel version of the Altis and the car is currently undergoing tests. While the final engine specifications are still unknown, one expects the engine to be in the 85 - 100bhp range if it needs to fight competition in the segment. Toyota are fairly tight-lipped on the possible launch dates of the car but we do hope it sees the light of day fairly soon – hopefully in the second quarter of 2010.

Heck, can't wait for it. Would be a perfect upgrade for me 5 yrs down the lane. Had Toyota launched the Etios diesel earlier, would have bought that instead of the Dzire. Have always loved Toyota despite its plain looks.

OT: RSM, please do edit the photo to make the number plate invisible in case prior permission from the owner is not taken.

The pictures and details are from carwale.

This is great news , there are many diesel lovers nowadays!! Maybe Altis started facing heat from Cruze with better looks , features and a cheaper price tag!


But it must be something around 95-110BHP in this segment , anything lower than this will make the car run out of breath easily in the highways!!

A diesel - toyota people will pour in their money.

that is the state of people here

After selling over 40,000 units from since few years in country of Toyota's popular sedan, Corolla. Finally, Toyota Kirloskar has decided to offer the car in Diesel Variant which will make three fuel options for corolla, i.e. Petrol, CNG and Diesel!

The engine which is expected to be plonked in is the 1.4L D4D CRDi from Yaris Hatch (Perhaps this was the reason Yaris was spotted testing?) which produces 90 BHP and ARAI Certified mileage is 21.42 Kpl. Below is a statement from company official:

“As India is an emerging market for Toyota, it will keep on rolling out new models as well as variants. The company is exploring various options and diesel-powered Corolla Altis is definitely on the cards. As a company policy, details like fuel efficiency and other specifications cannot be shared right now. But yes, we are launching it by either July-end or during early August. All the details would be shared at that point of time.” (Information Courtesy: Zigwheels.)

Yeah its confirmed by a toyota official .

And one of my friend who bought a swift diesel last week is ready to book it.

He was looking to book a diesel lancer after driving my petrol one.

They have a relative working as a sales manager , he has confirmed to deliver the first altis to them.

it may take about 2 months.

finally great to see that a toyota got some heat and going to launch diesel corolla which was pending from last many years in India!
@ilango you should try to get more info then, what are the specs and engine coming?
3

Toyota will out roll out Altis Diesel by July third week. The car will have 1.4 Liter and 90 BHP Engine with 6 Speed Autobox, including minor changes on exteriors etc, as reported by Autocar India.

The engine i feel is quite underpowered for this car.
A

100 BHP is not low.
And Toyota vehicles have never been known to be road rockets.