Eyes Off The Road: Met a Minor Accident!!

Note: This accident is a sheer foolishness from my end, although the loss is next to negligible but the lesson learnt is priceless. In fact the results could have been devastating in some other conditions. My sincere request to all the members is to always keep your eyes on the road and avoid the potential distractions like phone, ICE or even romance (Yeah, people do that in moving cars)

Many of you would have seen this ad by Volkswagen which used to be broadcast-ed an year or two back on TV. The ad is all about keeping your eyes on the road and what can happen even in a second of distracted driving (Which we frequently do):
https://www.youtube.com/watch?v=R22WNkYKeo8

How and what happened?
It's Maha-Shivratri today and I was on my way to the temple. Speed was around 60 kph (Or even more (80?), the car was accelerating) and I had a sweet song called "Khamoshiyaan awaz hain" from bollywood movie 'Inkaar' playing.

There was a sweet stanza in the song which I felt an urge to listen again and hence pushed the rewind button on my ICE setup. It was around 5 seconds that I kept the button pressed and the car was accelerating in third gear. Speed was over 60 kph for sure (Car took a good distance to stop) and suddenly a horn struck my ears. What next? I saw that there is hardly a foot gap between my car and the median and there is a biker hardly 15-20 feet away from my car heading towards me on the wrong side and driving very close to the divider/median.

Had I only braked hard, I would have ran over the biker; hence I applied hard brakes with a high steering input. Now this is a 4 lane road with the outer lanes simply useless because of construction work going on around. So basically I virtually had just 5-6 feet of space on the road for saving the motorcycle which wasn't enough to get the car back on track.

What next? I turn the car hard, hit a small heap of sand with a larger heap of bricks lying ahead. Since it was impossible to avoid this heap of bricks as there wasn't enough space to get back on the road so I turned a bit left and hit the heap of bricks on the side instead of trying to go over it or hit it at the center.

Let the pictures do talking now: 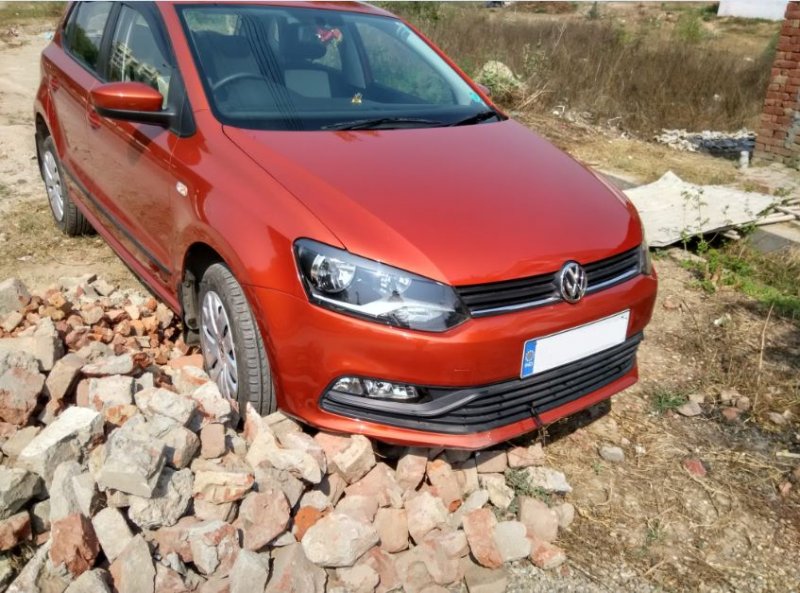 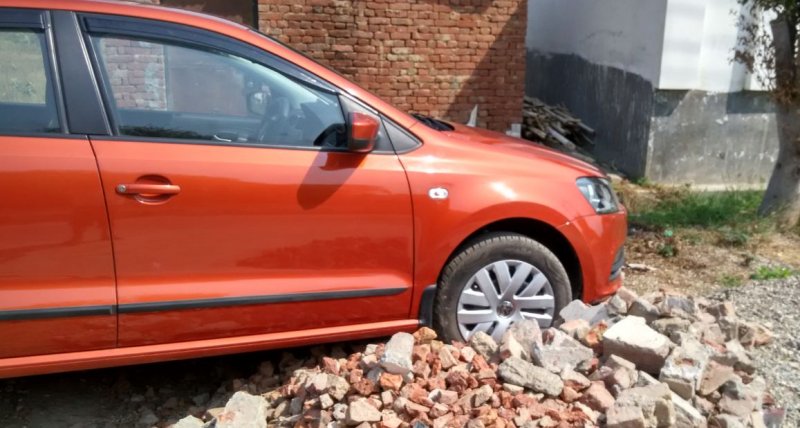 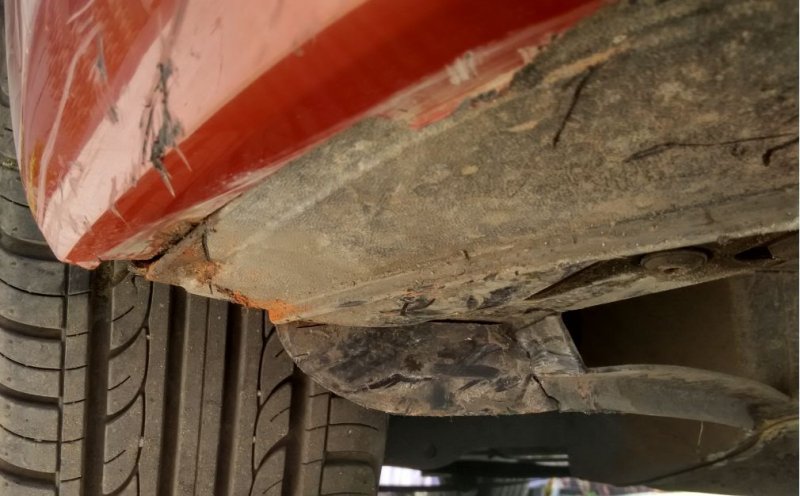 I'm glad that nothing happens, but meanwhile, WTH are you thinking Vipul?? If you wanna listen that song again why not listen when you are free or how about replay the whole song which is just one simple click!

You can say the mistake lies on the bikers head, but it isn't. You are as much of a fool as the biker. Sorry for being rude, but I couldn't digest that this all happened by someone who preaches everyone about Safe Driving but forget it on his own.

Be Safe and please take this your one and only chance of correcting yourself. No matter what, if thing go bad, it is going to be really ugly which no on want to happen.

Your presence of mind saved you and the Biker, even though your attention was diverted for couple of seconds. Not all could have been managed like this.

May be Lord Shiva saved you today.!!

Sorry for the minor scratches on your car bottom..
I

Good to know that you are safe. It was biker's fault of moving on the wrong side (and that too in the fast lane), but you know who would have been on the recieving end in case of a collision. Drive safe man. Not saying that you were not at fault.

Why didn't you use the steering mounted controls? I somehow think that the actual cause for this minor crash was something from the other 2 alternatives highlighted in the opening paragraph.

Nice that nothing worse happened and you and biker are both safe. Polo is also relatively safe.

Thanks god and may be it was lord shiva way of reminding you that be more cautious while driving. This is a good reminder for all that we should always concentrate on road while driving.

@FD: No offense taken sirji, even I am also having the same opinion. Things could have turned really ugly in no time.

@Nairrk:
The scratches are minor, I was more worried about under body damages and damage to oil sump etc.

@ice_wise:
Saarji now this is a long story, the TDi is Highline is with steering mounted controls and this one is MPi CL without them. TDi is also with me and I take it only on long journeys (it's resting in Gurgaon); typically the highway drives because of the hard clutch mainly. This one has a light clutch and crispy gearbox, also I like petrol engines more. So this car is with me for most of the time and I really love driving it. In fact this Polo has done 2800 kms in 40 days and I have done more than 2000 of that.

@auto pilot:
Indeed it is a lesson to always keep eyes on the road. Any time it can happen that we are looking elsewhere and some idiot or maybe a vehicle , pole etc come in our way. Surprise accident

OT: BTW I did detailing on this car, isn't it still looking good and shiny?

Got hold of the biker who happens to be a man in his late thirties working as a contractor who takes the contracts for making small scale residential and commercial properties.

I casually asked him why he didn't pass from left and blew the horn so late and his reply was like "there was less space on left and I was confused that you can hit me; I could see you not looking at the road and blew horn only after I understood that if I don't blow the horn now then you will definitely run over me".
A

Thank god nothing major happened and all are safe.
Similar incident happened with me. I was in bumper to bumper traffic and received a phone call which I ignored but my son who was in rear seat panicked and I turned to him and Bangggged.
I hit the truck in front of me. Thank god it had Bar which protected my car to go inside the truck.
My honda city's front grill and driver side headlight broken with 10K dent on pocket.

Phew ... that was some last moment escape Vipul. Glad that nothing major happened. Sharing my old experience and two cents.

Experience: Some 13-14 years back I was doing 60 kph in my Matiz on the ITO Yamuna Bridge, Delhi; thro' scattered Sunday after lunch traffic. I was on the right most lane. From the corner of eyes, I noticed people ahead stopping and seeing something on the left side of Bridge. As my path ahead was clear and moving, took eyes off the traffic. Perhaps for a second. When the eyes came back to road, saw a scooter completely at rest with the driver looking to his left and smack in front. At 60 kph, a second translates to 55 feet. Though I braked, the car kissed the scooter; Just ... a ... gentle ... kiss. Fortunately, no damage whatsoever.

My 2 cents: Glancing at the "ORVM or Speedo or Audio Console" might take 0.25 seconds AND car would have covered some 10 feet (even at 40 kph). Unless I am very clear of the surroundings, my eyes do NOT come off the road.
S

Thank god you and the biker are safe and most important nothing happened to biker which may have led to a life's hardest lesson.
Lord Shiva have given you a second chance, use it well. Drive safe.

Well considering nothing bad happened i also noticed your lucky to escape alot of damage for the car with bricks incident, you could have damaged AC condensor also loosing all ac gas, could have cracked oil sump loosing all oil. So looks like all things turned out well considering the chances of things going horribly wrong.

Even with eyes on road i have had close calls with wrong side two wheelers,similar to your incident but at night it was a young couple & i remember their faces even now, the boy(no helmet) was wishing he had not done it to save a min & was like "my poor bike will be damaged" & girl was like "oh am dead"!

Still mighty of you to put your incident here as an example to all & i really think you should have given that biker a piece of your mind & shown him some pics from our accident thread.
But as my friend said,you want to get into an accident in India, follow traffic rules

that was some quick thinking & swerving Buddy!
technically the biker is at fault as he's wrong side. but due to Indian mentality, the car would be held guilty.

Good save there. I guess a lesson learnt for you.

I had a similar experience recently. I was at 60 kph and a little girl just ran across the road. Barely saved from my car. She was even closer to the car behind me. The guy in the car behind me was shivering from the incident because he thought he had hit her.
F

Click to expand...
When someone joins TAI he goes through all sections out of curiosity. This thread is caught by them because of subject line given by our beloved "Saarji". The replies given by them brings these threads back to life and few old members who had skipped such threads those times can have a chance to go through it and give their comments