Your Favourite is crashed without any mercy!

Haha. It seems that damage wasn’t much.

Any video for Punto crash test?

Thanks. Looks to be safe

I was just watching this interesting crash test video of SLS. Have a look:

Really interesting. Good to see they pay so much attention.

Here is the video of my car 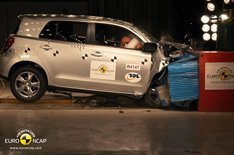 The latest cars to get five stars are


The Chevrolet Spark scored four stars because unlike the others, it doesn't have electronic stability control (ESC) fitted as standard.

Euro NCAP blamed the Urban Cruiser's low rating on a poor adult occupant protection score. However, Toyota says its car is safe, and is currently investigating the Euro NCAP result in detail, in order to understand why there is a difference between Toyota's assessment and Euro NCAP's rating.

The major difference between the tests currently mandated in India, and those in say Europe is the severity of the test.
The test in India is equivalent to the R12 regulation in Europe, which requires the car to be crashed into a solid wall at 48 kmph.
The current regulation in Europe is an offset test- R94 - (as compared to the full frontal in India) which required the car to be crashed with only 40% of the frontal width overlapping the barrier, which replicates the deformability of another vehicle. The speeds are higher, 56 kmph (upgraded to 64 for EURONCAP) and additionally, dummies are used in the test to register the injury criteria.
Also, Europe mandates side impact tests, which are not prevalent in India today.
India hopefully should move up to these regulations in 2012~13, subsequent to the availability of test facilities capable of these tests in India, which are being set up as part of NATRIP.

Oh, and forgot to add, the regulations in India currently exempt vehicles greater than 1500 kg GVW or Forward Control Vehicles from having to undergo the test.
Which is why the Omni is still sold!!

Aditya said:
Oh, and forgot to add, the regulations in India currently exempt vehicles greater than 1500 kg GVW or Forward Control Vehicles from having to undergo the test.
Which is why the Omni is still sold!!
Click to expand...
So Omni is heavier than 1500 Kg?


So Omni is heavier than 1500 Kg?
Click to expand...
Naah, it is actually a FCV (Forward Control Vehicle) which has to have its steering wheel centre in the first quarter of the vehicle length, and the engine, or part of it, behind the rear edge of the wind shield.

In 2009, Euro NCAP crash tested thirty three car models, using up to a total of three cars, three front seats, four child seats and an array of spare parts per model. To achieve the overall rating, the car model is usually put through four crash tests, a component test and is assessed by an inspector who considers tests results and the safety equipment and features of the car. In 2009, upon the request of the manufacturer Euro NCAP also considered results from vehicles crash-tested in 2007/2008 and carried out the necessary tests and assessment to upgrade them to a result applicable under the new rating scheme. (source: Motorbeam)

Great find 350Z! Good to see the i20 leading at the top.
You must log in or register to reply here.