End of The Road For Maruti Suzuki 800: Now Totally Discontinued

Today's morning I took the newspaper in my hand and started searching for news,suddenly my eyes caught something and on reading it,I was surprised.What was that?Just have a look at this:- 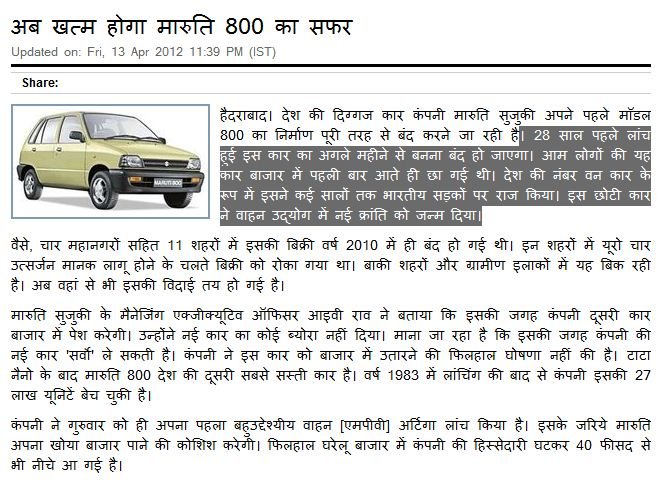 If we people go to our past then most of us have either owned an 800 or are owning even today,but now Maruti Suzuki has decided to phase off this car only because this car isn't doing the expected numbers.
But what about their heritage?
Have the numbers became so important that Maruti Suzuki is forced to forget their heritage?How can they discontinue such a iconic world famous model.
It looks like every company preserves some of its heritage like:
VW Beetle.
Porsche 911.
Toyota Land Cruiser.
Chevrolet Corvette.
Mahindra JEEP

And many more..
Then why Maruti hasn't chosen to modernise their heritage car,the car which itself is called MARUTI?

End of the road for a car that began motoring era..

Maruti 800, India’s most iconic car, will soon be history.

Maruti Suzuki, which heralded a revolution of sorts with it, creating a whole new segment of cars, will stop manufacturing Maruti 800 before the month-end.

The car was launched in 1983, the year India won the World Cup. And a winner it was all the way, provoking us to ask Kitna deti hai and grossing some of the highest sales numbers ever — the car has sold more than 2.7 million units since launch.

Three decades on, it is time to bid adieu.

Not surprisingly, the industry is singing paeans.

It was a simple, humble and mediocre car that became the most unlikely status symbol in India, said Anand Halve, co founder of brand and communication consultancy Chlorophyll.

Abdul Majeed, leader Automotive Practice, PricewaterhouseCoopers, concurred. “The car was launched for people who could not afford then existing cars like Padmini and Ambassador. It gave people a chance to own a car at that point of time.”

With limited competition, M800 ruled the Indian roads until 2004 when Maruti Suzuki introduced its own Alto, another bestseller. By 2010, the company had stopped selling the M800 in 11 cities, including the four metros, due to new emission norms.

With more players entering the Indian market, the market for M800 started shrinking. Last fiscal, the company sold an average 2,000 units of M800 a month compared with 5,000 units in FY11 and around 8,000 units earlier.

Though sales were sliding, the company never confirmed the phasing out of the model.

But recently, on the sidelines of the launch of its latest multi-purpose vehicle Ertiga, I V Rao, managing executive officer, engineering, Maruti Suzuki, told reporters, “We are stopping production of this model from this April-end.”

Sanjeev Bafna of Seva Automotive, who has been associated with brand Maruti for almost 25 years now, feels that it is probably the only model which sustained its market leadership for the longest time. “Every revolution has to go through some success and challenges. Despite having so many new models available now, we still get enquiries for M800. Hopefully, the company will soon look at getting a product, which will generate similar interest.”

According to reports, Maruti Suzuki is working on a new product to replace the M800. However, details are not yet available.
Last edited: Apr 14, 2012
J

or Just an exaggeration for a news..!

Okay then you tell me which is India's most iconic car?
Any car which revolutionised the Indian automotive scene at a higher level?(Although the lies below the link are copied from the link itself)

Remember the old M800 was a favorite of everyone 15 years back when i used to stay in Chandigarh.Every house hold had a white color M800.The car was on wish list for many after Zen and M1000.
J

droy said:
Remember the old M800 was a favorite of everyone 15 years back when i used to stay in Chandigarh.Every house hold had a white color M800.The car was on wish list for many after Zen and M1000.
Click to expand...
there were only two cars maruti800 and ambassador obviously rest of them like premier and contessa were hard to buy.

15 years back I remember my dad had saved money to buy a maruti 800 but even though I was very young I was strictly against it.

At those time many people were very much against it for its flimsy and unsafe design but people ignored it and maruti had Gala time.

Till this date Maruti cars are substandard exploiting and influencing a very large part of ignorant mass in India.

You are right Jayadev,at those times people were against the flimsy build of 800 but were in favor of crude jeeps.But buddy there is a simple fact:-
Every great thing has a lot of bashers...

jayadev said:
India’s most iconic ? ....Are you kidding?

or Just an exaggeration for a news..!
Click to expand...
It may not be the most iconic, But it sure did change the motoring scene in India.

And about the flimsy build, I dont think it was that bad back in the days. I am not sure of the situation now where cost cutting and compromises on build quality are the orders of the day.

I had one example(a 94 make 800) and it started showing signs of rust only after a decade. And also know this, I used it for Autocross and dirt races. It used to be kept covered in dirt and mud for a week at times. It had clocked 1,35,000kms by the time I parted with it and still its engine and gearbox were in great shape, No rebuilds were ever done or required. Fuel efficiency was 20.5kmpl in a combined cycle even then.

Tailpiece: My brother in law's Polo has got rusted seats, The part where the springs underneath the seat get clipped into the frame is falling apart. The car was not even a year old and this was before its first service. The car has also just done 3000Kms and is nowhere near a coastal area. The VW dealership has agreed to replace the front seats. And they say its built like a tank

i think every model has its time and after that it becomes history.same thing happend with premier padmini some 14 or 15 years ago which dominated indian roads for 4 decades but still surviving because of many having taxis.in my opinion premier padmini went down because no improvements were madee since its production in 1964 and i think same is with m800.they didnt made any major improvement in m800
S

There is an 18 year old M800 in my family. 1.7 lakh km without a single rebore. Still runs like new. cars will come and cars will go, but the M800 shall remain the one car that started it all by putting the average Indian on four wheels. Cheers to the little car

guys 800 wont totally stop. msil will bring cervo to replace it! it will be big mistake again like they did by stopping jellybean zen and launching ugly estilo!

Maruti Suzuki has discontinued the 800 hatchback, an iconic car that is often credited for putting India on four wheels. The Maruti 800 had an unbroken production run for over 30 years, with the first car rolling out way back in 1983. The car was first built by Maruti Udyog Limited (MUL), a joint venture of the Indian government and Suzuki Motor Corporation of Japan. Suzuki has since bought out the Indian government’s share in MUL. Production of the Maruti 800 ceased on 18th January, 2014. 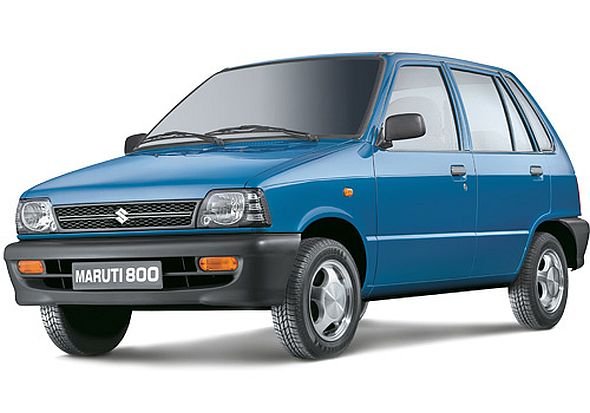 Although BS4 variants of the Maruti 800 were discontinued a couple of years ago to make the Alto F8D the new entry-level model in Maruti Suzuki’s portfolio, India’s largest car maker continued to produce the 800 hatchback in BS3 guise to cater to the semi-urban and rural parts of the country. The Maruti 800 was also being exported to emerging car markets in South East Asia and Africa. Now though, production of even the BS3 variants of the Maruti 800 has been halted, thus signalling the end of the road for an automotive legend of India.

At a time of its launch in the winter of 1983, the Maruti Suzuki 800 represented a higher quality Japanese alternative to cars such as the Hindustan Ambassador and the Premier Padmini. At a time when reliability and fuel efficiency weren’t really the selling points of cars in India, the Maruti 800 brought Japanese reliability and frugality to the table, thus giving Indian car buyers their first real trust with compact, fuel efficient and bomb-proof reliable cars. The 800 will remain an icon in the automotive landscape of the country, more so since the car was the one on which many generation of Indians learnt driving. 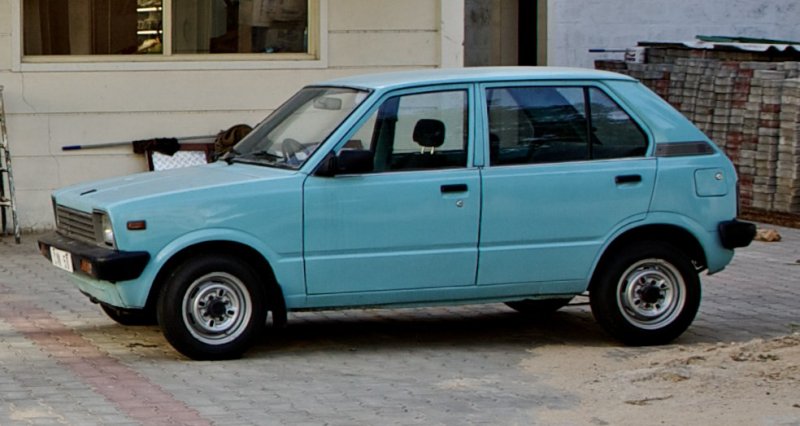 The Maruti 800 was powered by a 3 cylinder-F8D petrol engine that was known for its peppy performance, reliability, low maintenance costs and high fuel efficiency. A 4 speed manual gearbox was standard. Air conditioning was added 3 years after the car’s launch here. The carburetted version of the F8D motor on the Maruti 800 output 37 Bhp-59 Nm, with a more powerful 45 Bhp-62 Nm version outfitted to the 5 speed version of the car that was sold for a brief period of time. When the Bharat Stage 1 emission norms kicked in during 2000, Maruti Suzuki added 4 valves/cylinder and MPFI (fuel injection) to the Maruti 800.

Notably, the Maruti 800 never saw a factory fitted, power steering equipped variant in its lifetime although the aftermarket modifiers did come up with power steering kit for the light car that actually never needed a power steering. In fact, the direct and connected non-power assisted steering of the Maruti 800, in tandem with its compact dimensions gave it a near go-kart like fun-to-drive driving feel. However, Maruti did equip the 800 with LPG dual fuel kits. Maruti has sold over 2.66 million units of the 800 hatchback in India, making it the largest sold car model in the country’s automotive history.

Do take a few moments off to watch this evocative ad of the Maruti 800 that succinctly conveys what the car has meant for lakhs of Indians.

Truly a sad thing to hear.The car in which I learned driving our humble 800.Was with us for 12 years and had a single breakdown.Now it may seem ancient and crude,but there is no way but give credit for the revolution it brought to our car industry.The car that put India on wheels.You will be missed.

It had been a synonym for car for many years and ruled the roads.
Last edited: Feb 11, 2014

800 was a true legend. I am really sad that i had part with mine. The fuel efficiency was just great. mine returned an average of 28kmpl (highway) and 22-23 (city) with 100%AC.
The maintenance was also cheap.
It was this car that changed the way Indian's drove. 800 came when the mighty Ambassador and Premier were the kings of road. and swiftly overtook them and paved the road for the new gen cars.
really 800 will be missed, MSIL should have kept the production by changing the engine or something like that to keep the legend running

Our M800 served us faithfully for 10+ years and never broke down or left us in a lurch. Co-incidentally, we sold ours just a few days before the last one was manufactured on 18th Jan. If we had an extra parking space, we'd have loved to keep it running for a few more years.
You must log in or register to reply here.