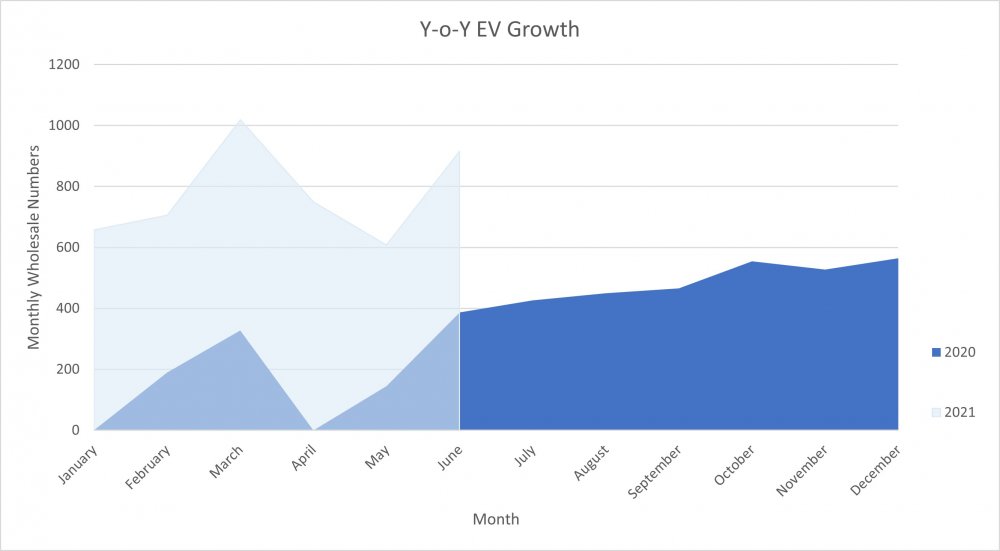 So far Tata had sold around 8000 vehicles (till Aug 2021) and when they have claimed 10000 EV then it implies tata has sold over 2000 EV in month of Sept alone. that is indeed a very very fantastic feat by Tata.

They need to improve their after-sales. There are more reports on different niggles and poor service experiences. Unless they improve their brand image there, it is difficult to convince and assure the people to buy a great product.
If we take a poll , whether an existing user will look into TATA again, high chances that it will be a NO.

Sales numbers of Electric 2-Wheelers in India. Shared by Society Of Manufacturers Of Electric Vehicles (SMEV). 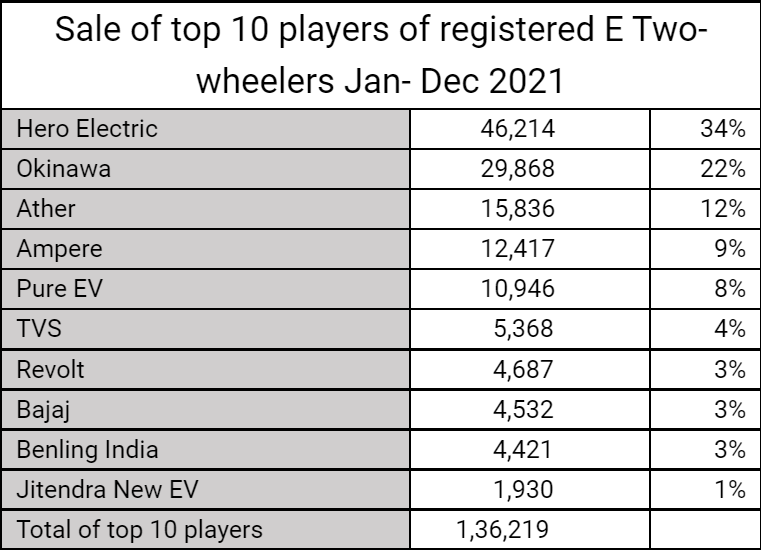 The high-speed E2Ws, which have speeds greater than 25km/hour and require a full license, registered a whopping 425% growth, while the low-speed E2Ws (less than 25km/hour, no license, no registration) grew only by 24%.

The low speed has had negative growth in the last 2 quarters of 2021. The market share of the low-speed segment used to be upwards of 70% in all the previous years, and that has dipped to less than 15% in the last quarter of Oct-Dec 2021. The low-speed E2Ws are not subsidized under the FAME 2 policy that incentives only high-speed bikes based on their battery capacity @ Rs.15000 kwh, which has made the entry-level high-speed e2ws cheaper than many of the low-speed ones.

Commenting on the performance of the industry, Mr Sohinder Gill, Director General, Society of Manufacturers of Electric Vehicles (SMEV) said, “We haven’t seen better days than the last few months in the entire EV journey. In the last 15 years, we collectively sold around 1 million e2w, e-three wheelers, e-cars, and e-buses, and we will most likely sell the same 1 million units in just one year beginning January 22. The recent positive changes in EV policy through FAME 2 are a game-changer and a decisive move by the government to ensure a cleaner and greener transportation sector, reducing reliance on expensive and contaminated liquid fuel. Customers have now started shifting in large numbers from petrol two-wheelers to electric ones due to attractive prices, lower running costs, and lower maintenance. A significant percentage of customers also factor in the environment and sustainability in their decision to buy an electric two-wheeler. Going by the recent monthly trends, the next 12 months may see 5 to 6 times the growth over the previous 12 months.”

The E2W market is divided into 3 segments, low speed, city speed, and high speed. While the low-speed segment is waning away, the city speed segment (up to 50 km/hr) is gaining traction due to attractive pricing and lower replacement costs of batteries. Adoption in the high-speed segment, i.e., 70 km/hr, is low but may increase in the next few years as the battery prices come down.

Mr Gill explained the confusing nomenclature used for electric two-wheelers in India by saying, “Currently, all-electric two-wheelers sold in India are called electric bikes or e-bikes, but in fact, they are either electric motorcycles (around 2% of the market) or electric scooters (98%) that can comfortably seat two people and look like their petrol two-wheeler counterparts. There are no e-scooters like the ones seen in North America or Europe on which a rider can stand and go short distances. Electric cycle sales in India (popularly known as e-bikes globally) are also negligible and just beginning to happen. However, in the next 2 to 3 years, we will have products across all segments, ranging from e-scooters, e-motorcycles, and e-cycles from large and organized players. In four to five years, we can now confidently predict that around 30% of the two-wheeler market will be electric.

Both federal and state policies are acting as strong tailwinds to transform India’s mobility sector to electric and help achieve a reduction in atmospheric pollution as well as the ever-burgeoning crude oil import bill.
Click to expand...
Drive Safe,
350Z 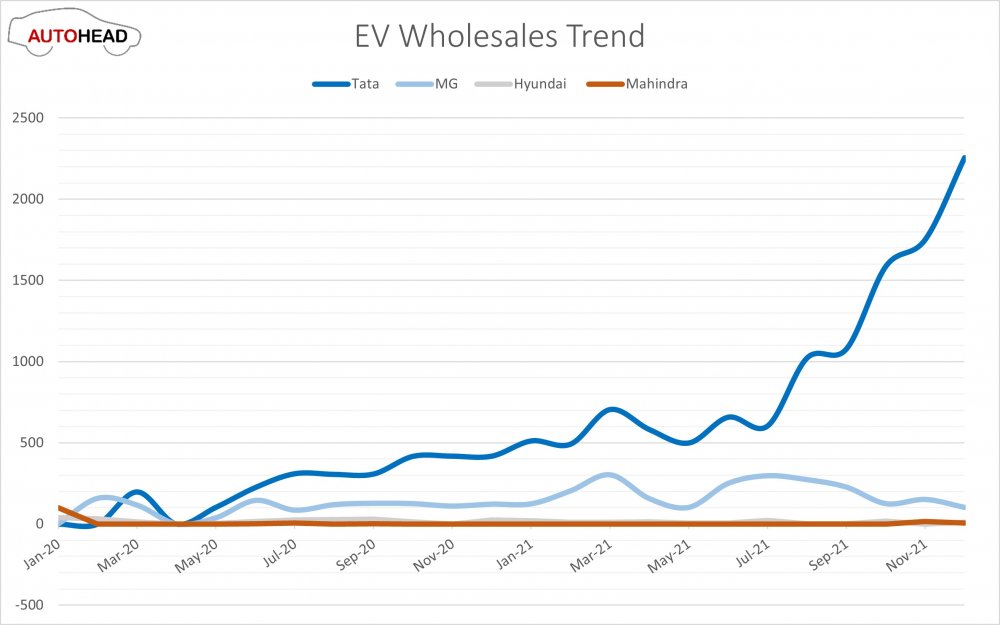 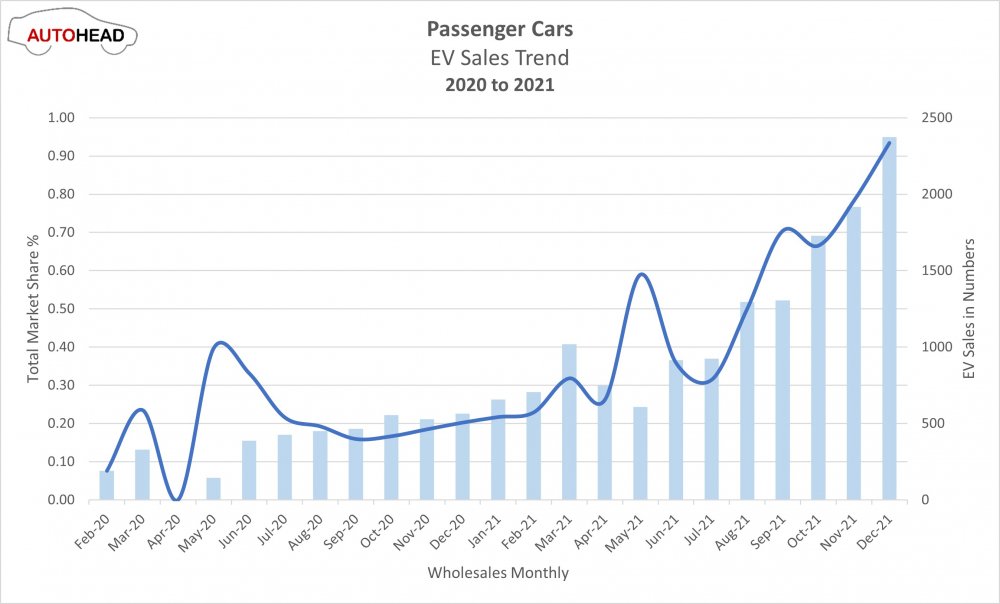 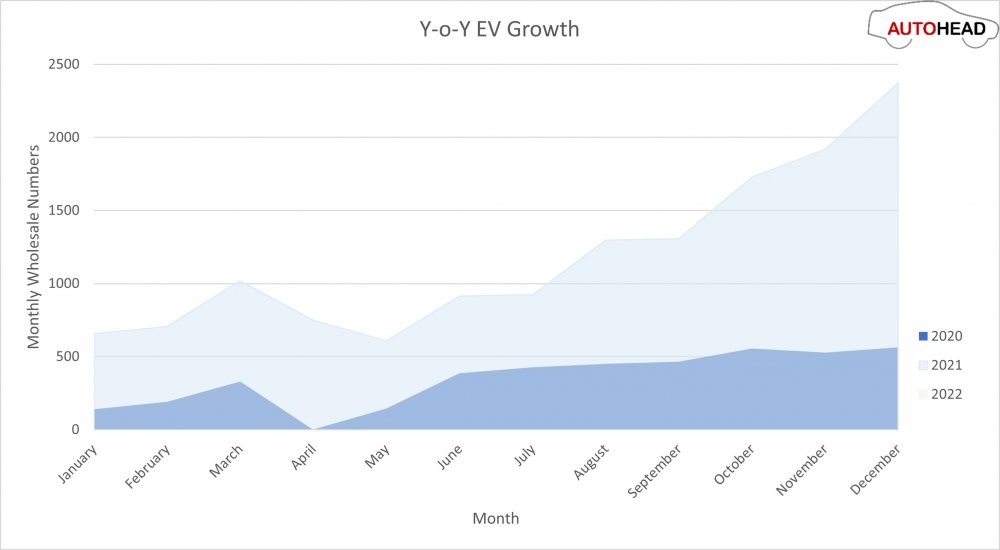 Drive Safe,
350Z
Click to expand...
We see even Jitendra New EV but no OLA? are the numbers correct?

EV car sales in Jan 2022.
Tata motors have established their dominance in EV with over 97% MArket share in the country. MG has been able to ship 56 ZSEV and seems to be loosing the game in the EV segment where Nexon and Tigor have caught the fancy, Confidence of India EV buyer. the car offer great performance with Decent range at a pretty attractive pricing have shown the results for the Indian OEM.
With close to 3000 EVs sold in the market the EV has now claimed just over 1% of over all market. This is first time that EV has claimed over 1% bodes well for the EV segment.

WardWizard Sales Figures:
Drive Safe,
350Z
You must log in or register to reply here.