Electric Vacuum Pump and Oil Catch Can for Maruti 800

Other things like hose pipes, valves also the vacuum switch were sourced from EBAY (except hose pipes)

The main reason for the installation of Vacuum pump is, as 800 does not have capacity to generate the sufficient vacuum need for brake booster so we are now using this pump instead of drawing vacuum from the intake manifold. Here we are using Zen booster.

Vacuum pump is widely used in other countries, especially in electric cars.

So finally the result is good, we are still testing.

The only thing which is bothering is, the pump gets heated up soon.

Next comes the oil catch can, we is used to collect the oil and water vapor which is passed from engine head to throttle body which makes the throttle body oily and sticky which restricts the air flow.

We have used a aluminum water bottle and 2T brass junction also used steel scrubber which is used as a filter (inside the bottle)
And we have connected it between the pcv valve.

Finally we have also swapped a battery from Accent which is 75 amps. Maruti 800 batter by default is 35 amps, the model no is Din55 (accent battery) Does its job pretty well. Just need to change the battery terminal clamps as they are bit big than the stock ones.

Here are some pic's I will write more about it later. Hope you guys liked it.

Waaooo,
now this is a real DIY
great one
S

Oh my god! This is an insane DIY

Vacuum pump used - Volvo S40 (bought from EBAY)
Click to expand...
How do you come up with such a DIY? Braking must have improved by a huge margin I guess? because usually with the old setup there is a kind of delay sometimes for the vacuum to form. Bigger battery means, the new pump must be sucking more power, am I right? if so, what about the alternator?

What exactly is this Oil catch can? Does any car come with this thing as a stock/OEM part?

OT: You did not the spare even the Volvo this time

Hats off to you guys, simple parts like the hose & those clamps can be quite a headache while doing a DIY, I can understand how those 3months should have been to you both.

Please explain what is the difference felt immediately & also on the long run, because of this Unique DIY?

Thanks.. Braking has improved. Main thing is even when the engine is off your brake works as the vacuum is generated from the pump. So no worries in B2B traffic, driving down the hill etc..

The pump almost needs 10 amps, though it wont run continuously, it runs when ever there is short of vacuum, this is controlled by the vacuum switch.

Oil catch can comes as stock in some cars in other countries.
It is usually used in race cars.

An oil catch can is used in turbo applications, or high-performance race applications where excessive blow-by (leakage past the piston rings) of air and fuel vapor occurs. This creates a positive pressure in the crankcase. Engine manufactures have placed a valve on the engine block which releases this pressure. This valve is known as a PCV (Positive Crankcase Ventilation) valve. During engine operation, blow-by gases, as well as oil mist from the rotating components of the engine, pass through the PCV valve and are routed back into the intake for the engine to burn off. However, some of the oil mist and other products settle along the engine intake and over time form a "gunk." The oil catch can collects the oil mist and condenses the fuel vapors while allowing "cleaner" gases to be passed back into the intake. Typically the blow-by gasses are passed through a wire mesh, which give the vapor droplets something to adhere to. Since the oil catch cans condense the vapor portion of the gasses, they will need to be drained periodically of all the oil, fuel and other contaminants.

Any way we tried it because we found the stick - oily thing in our manifold which reduces the performance. It will not cost you much, not more than 300rs.

nice mod, I suppose it's more visible when the engine is running on low RPM, when you're running is recommended to not press the clutch when braking, because mantaining the engine an middle-high RPM enlarge the vacuum, even more when you're not pressing the throttle

Do you have any problem for fitting that battery? the original model is costly and small..

With the vacuum pump you feel the engine more slowly? any change with the swap of alternator on engine power?

Yes it is very usefull at low rpm.

No I just had to swap the terminal connectors which cost 150 rs INR.
The original (stock) battery comes with 38 amps max, I have got 75 amps now.

And for the alternator here comes only 35 amps I have upgraded to swift's alternator which is 75 amps.

BTW who many amps alternator is fitted in your car juandiazmora.
J

I have the original alternator (35 amps). I have heard that maruti's alternator is poor on efficience, so swap to a bigger one helps to gain engine power (or to not lose engine power because of the alternator..)
I was trying to reduce the electric consumption of my car, that was a reason for fitting a HID kit, and I have installed leds bulbs on dashboard, position lights (front and rear), brake (of course) and licence plate lights, it's not a lot of change, but it's something..

You can refer my alternator upgrade thread..
http://www.theautomotiveindia.com/f...43-diy-alternator-upgrade-maruti-800-a-2.html

juandiazmora said:
I have installed leds bulbs on dashboard, position lights (front and rear), brake (of course) and licence plate lights, it's not a lot of change, but it's something..
Click to expand...
Can you please post some pics of the LED lighting . .
J

This is all I have with led bulbs.. These pics are when the leds were new, now they lit a little less, but still is a good lightning.. 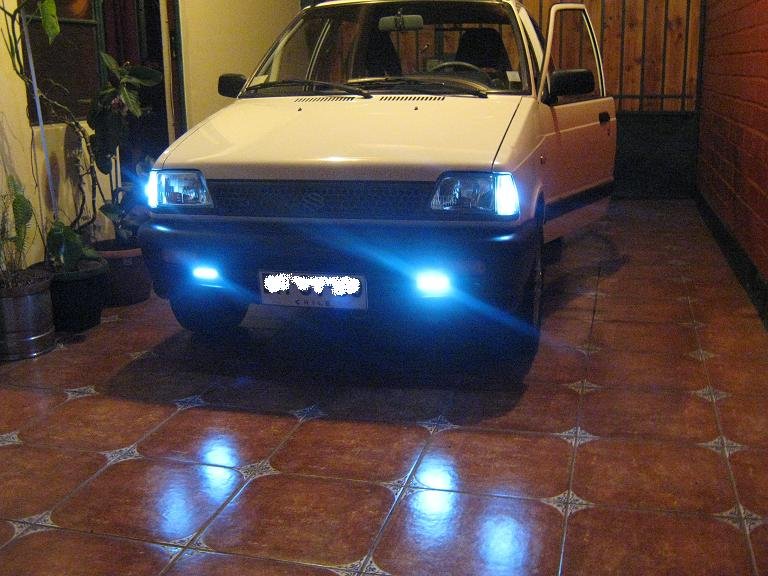 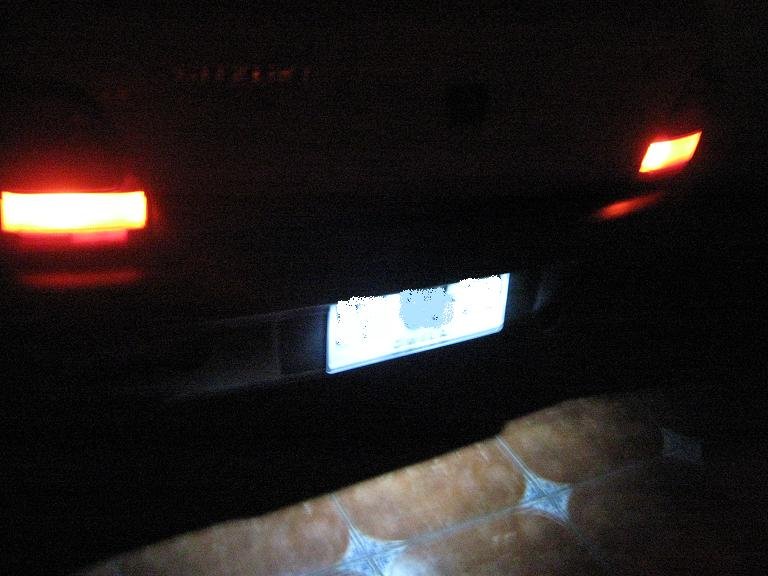 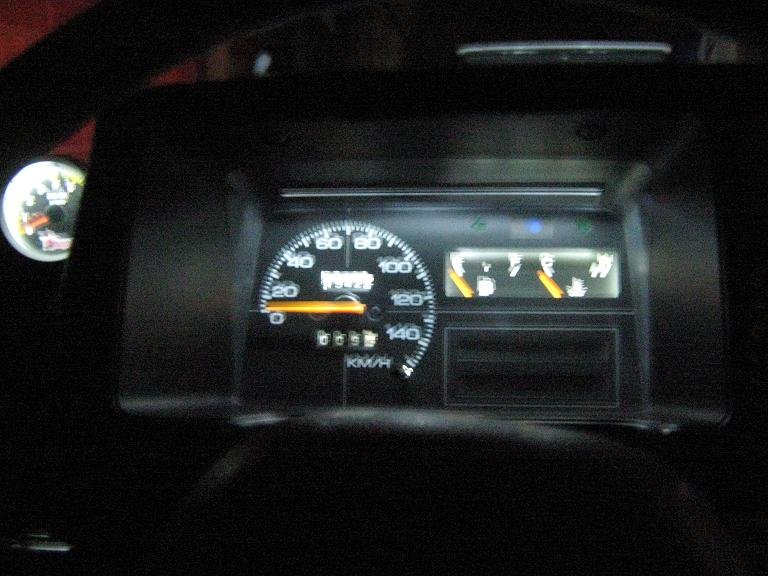 I retired the led lamps on the bumper because some leds started to fail..
Last edited: Aug 15, 2012
I

Vacuum pump used - Volvo S40 (bought from EBAY)
Click to expand...
Hi Varun,
It is a nice DIY and a sensible upgrade for M-800. I would like to ask you at what vacuum level does the vacuum swicth cut off and cut in. Also how long does the pump stay on in one stretch?
Also why did you have to upsize the battery? Was it because of the pump?
Since the pump anyways supplies with more vacuum than the manifold, in my opinion the plumbing to the intake manifold is vestigial.
For the connectors in the vacuum switch, please purchase the connector sleeves from LPG / CNG converting shops. Might cost you a Rupee or Two.
Thanks
-Ilango P

The pump stays on for max 10 sec. I will let you know the pressure which I have set in the switch. Any way I have used the hose pipes from omni's and zen's booster.

And regarding the battery, I have upgraded my alternator to swift one, at idle at night there would be a drop in voltage, also I have bit more electrical accessories hence I had to upgrade it. As the previous battery was dead, I thought to upgrade it.
I

Varun560061 said:
The only thing which is bothering is, the pump gets heated up soon.
Click to expand...
To reduce the duty cyle of the pump, you may install a vacuum reservoir from a Tata Sumo. This can keep the pump from operating less often than now.

Do take several trials with the vaccum thing . try insulating it first to check if its heated by engines heat.

Do take several trials with the vaccum thing . try insulating it first to check if its heated by engines heat.
Click to expand...
Ha Ha thanks for your comments ! But I never did any DIY on Mahindra.
If you get me one I would definitely do it.

First I tried it keeping it under the driver seat, still it was getting heated up. So finally fixed it in the engine bay.

Presently I am working on slotted disks (brakes) whats your opinion about this ?
You must log in or register to reply here.