Here is a pic of the ugly bike.

This bike is looking awful IMO! 1 Lakh is too much and moreover only one person can travel in it.
A

cooldhaya said:
This bike is looking awful IMO!
Click to expand...
Awful!!
Understatement of the year.
It looks like an overgrown insect.
And why 125cc?
Give atleast 250 cc with atleast 50 BHP.

Looking at the design, I am doubtful whether this is street legal bike?

The bike, though an attention drawer is a big no-no for college guys, there's no space for the petite pillion rider!:redface:
A

Here is an official KTM video

The 125 Duke is powered by a liquid-cooled fuel-injected 125cc engine with a claimed output of 15.2 PS. Scheduled for a launch in the next year, the bike was first showcased in 2009 EICMA show in Milan. The EICMA showcase infact consisted of two variants of the 125 Duke- namely, 'Race and 'Stunt', leaving us with assumptions of some similar platforms following this major launch. The 125 infant has been developed by the same team which worked on the 690 Duke. In India, 125 Duke will be assembled in association with Bajaj and there is a strong possibility of some local components being used as well.
Talking of Bajaj, the company's to-do list also includes a three-way alliance with KTM and Kawasaki. The brotherhood in these three motorbike barons means sharing of R&D and global distribution strengths. With a 31.72% stake in KTM and Kawasaki's shoulder to spread it's network in SE Asia and Latin America, (apart from Philippines and Columbia, where the Pune- based company already has a strong hold) Bajaj promises low cost manufacturing models to its partners. Thereby cutting the cost and making it a win-win situation for all. The final decision is as known to all as the egg and chicken mystery. Source: Bike India

The KTM Duke 125 will be manufactured at Bajaj’s Chakan Plant, and specifications for Indian model have been now revealed. This 125cc bike is capable to produce 15 BHP @ 10500 RPM and 1.2 Kgm of torque @ 8000 RPM. The duke will have six speed gear box and it’ll come equipped along with high-quality Brembo disc brakes of 280mm and 230mm for front and rear respectively. What’s even more interesting is that Internationally KTM has restricted the top-speed to 100 Kmph only, since targeted buyers for this bike is young audience but whether same applies for India too is yet to be seen. Pricing, as mentioned earlier in this thread, it’ll reach to approx. one lakh rupees, expect the bike to debut in India by mid-2011.

350Z said:
What’s even more interesting is that Internationally KTM has restricted the top-speed to 1000 Kmph only, since targeted buyers for this bike is young audience but whether same applies for India too is yet to be seen.

Specs are good but i don get the logic behind speed restriction!

Its a street sport bikes India does not have these kind of designs as before. And people in India is tired with 150cc category bikes as we want something more, international companies should come out with at least 300cc. As Mahindra Mojo is coming up great on the road.

jalex said:
I guess that would be 100kmph, right?
Click to expand...
Right.

cooldhaya said:
Specs are good but i don get the logic behind speed restriction!
Click to expand...
Precisely speaking, it’s the teenagers who are most enthusiastic about speed and because this bike is primarily targeted for them, hence the restriction.

bad move! a bajaj 220 with more power is available for half the price.

The KTM Duke, which weighs merely 128 Kilograms, has been recently caught testing with slight disguise, translating that the launch is just around the corner. 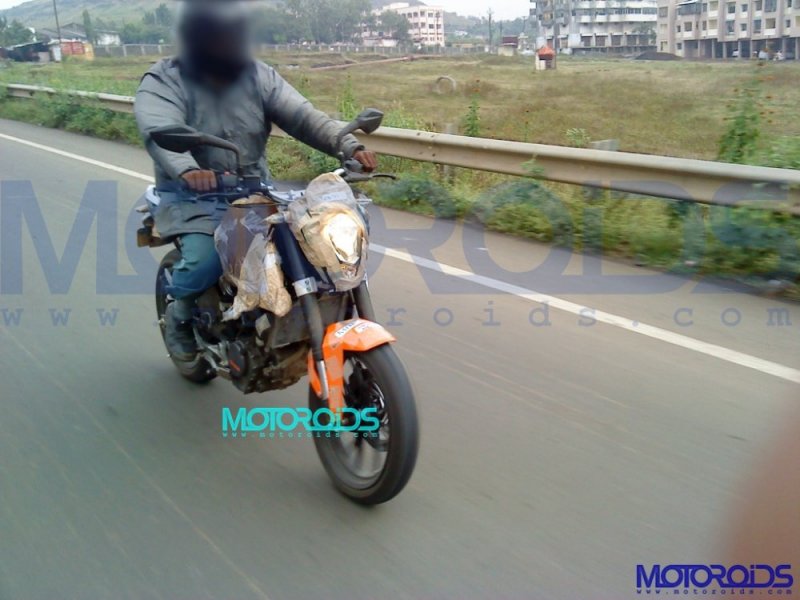