Actually I was not happy with the job done by the car accesories shop in habibulla road.

The most annoying thing was the rear speakers did not worked properly from the day one after fixing the audio system in my car. I think the following could be the reasons.

I was thinking of doing something for this for long time. Just day before yesterday I did it finally.

I got the following things ready for this job. 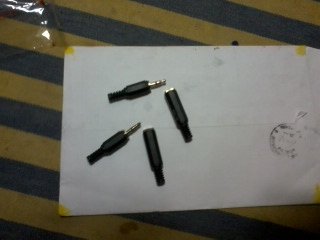 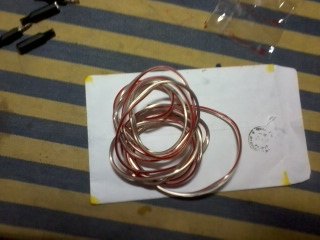 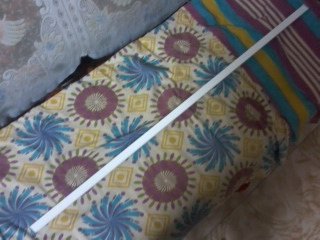 In addition to this I got the following utility tools which can be used for other purposes also. 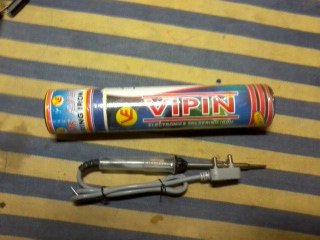 Soldering Rod for Rs. 75 [ I know this is not a branded one, but since my usage is going to be very minimal I do not want to spent more money on this] 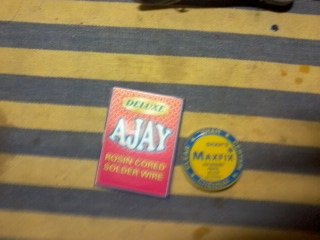 
Apart from that I had the following earlier 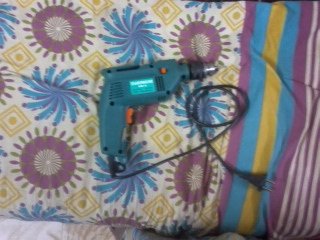 Drilling machine. I do not remember the cost of this since I had got it long back.

Once everything was in place I started fixing the PVC pipe. 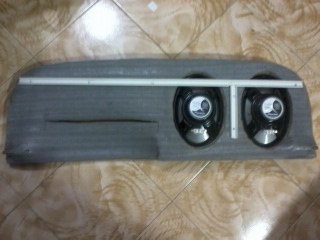 First I fixed the bottom of the PVC pipe after drilling. It took hard 10 mints only.

Once I fixed the PVC bottom, I started soldering the wires on speakers. 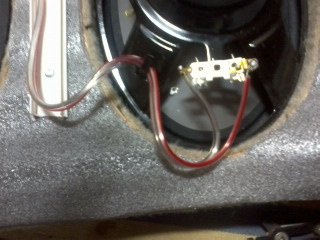 Actually this literally drained my energy. I used to do soldering work some 15-20 years back with my uncle. we used to assemble pocket transisters [those were famous DIY in electronics those time]. When I did after this huge gap I dont know I was not able to do it properly. the LEAD was not fixing properly or mostly it spills out. While doing with the first speaker, some LEAD spilled on the speaker paper also. I got scared. Luckily nothing happend. After a huge struggle i was able to complete one speaker. 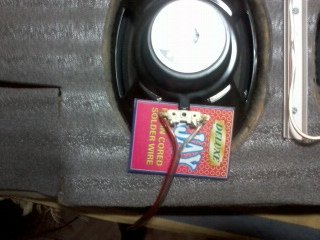 Based on my experience with my first speaker, I made sure I had something below the speaker points, so that LEAD will not fell in the speaker paper. 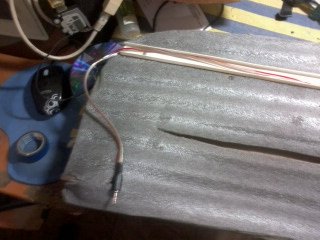 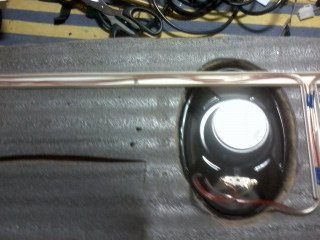 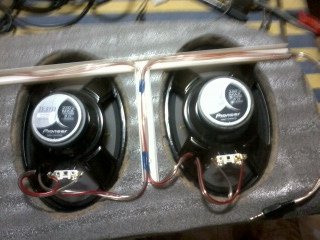 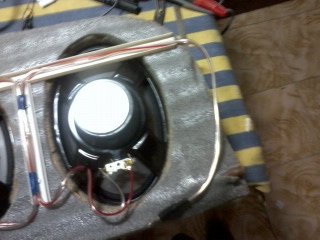 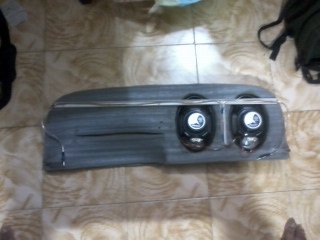 Once I was thru with speaker points soldering, I connect the male pins at both ends.

By now the trey part is ready.

Now I have to connect the female sockets at the output end [rear end] from the system which is available in the boot area of the car. The available wire was very short. Because of this, I thought I may not be able to use soldering rod inside. So I have decided to have two piece of wires with female socket soldered and then connect that wires with output in the car using tape. 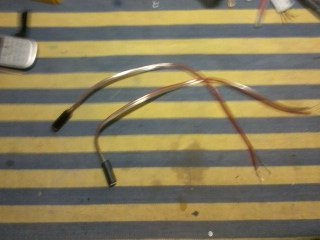 Two peice of wires with Female sockets attached. I taped this with output end in the car.

Once all these are ready, I fixed the parcel trey and attached the sockets.

My god. The output was very disturbing in both front and rear speakers. I was worried. First I was listening to FM. then I thought it could be because of poor reception of signal [ It was raining heavily at that time, day before yesterday evening]. So I tried with USB and the same output.

When I completed upto this, My family wanted to go upto chennai silks. Through out my driving I was thinking of the reason. I could not come to a conclusion.

While returning to the parking lot from the shop, I wanted to try disconnecting the entire setup I did. Immediately I removed the tape which I did last. this completely detached all my setup. Then to my surprise everything was perfect.

Then I analysed and found that the soldering I did in both male female pins could have been wrong or there could be a short circute since I did not do well [ while doing the soldering itself I had doubt, but I thought it may not affect much].

After this, I got a plastic connecter 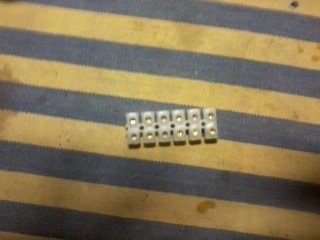 I have removed both male and female pins from my earlier setup. Then using this I connect the setup and now the output is perfect.

Advantage of this is, the wires are not hanging. I can take out or keep in things in boot space without and disturbance.

Only thing I got disappointed is the male/female part. Actually I wanted that setup is, when ever I give it for servicing I would like to detach the parcel trey easily. This is important for me since I have a LPG model, some times checking has to be done on LPG tank at the rear and I need to remove the parcel trey when ever I want to use spare wheel.

Anyway, I thougt of taking this setup to some local electronics guy and do the soldering part alone professionally.

Anyway as of now Iam very happy and the task which I have started was completed successfully. Now we are enjoying the ICE fantasticly.

You can also get this plugs specially for speakers in automobile shops, I have them.
I can post a pic if you need.

You can also get this plugs specially for speakers in automobile shops, I have them.
I can post a pic if you need.
Click to expand...
Pls Mr. Varun. Pls post the pics if u have.

Yes I thought of ordinary electrical plugs. then i thought if we have proper male and femal pins for audio means it will be good. But un fortunately it did not worked out.

Today, I wanted to fill Nytregeon air in my spare wheel for which I need to remove the trey since the spare wheel is attached in my back seat [ LPG tank occupies regular spare wheel space]. Since I had used a simple connector I had to unscrew it and ditach the wires [ which is not a huge or time consuming task ] and remove the trey. Then I decided to do somehting.

As Mr. Varun said I got regular electrical male and femal pins and connected at each end. Its perfectly got settled. So now it will be easy for me to take off parcel trey any time.

Any reason for placing both speakers on the same side of the tray? It will mess up the soundstage.

racerdabba said:
Any reason for placing both speakers on the same side of the tray? It will mess up the soundstage.
Click to expand...

My car is LPG model. LPG tank occupies the Spare wheel space. so the spare wheel is placed at back side of rear seat on the left side. so placing a speaker there was not possible. so both where placed in right side. Yes I know it spils the sound, and I will do something for that.
S

Nice DIY Sethu, your love for the car is visible in those pictures. Good effort, Good result.
I have a suggestion though. In ICE spares shops you get simple pressing clips, which can be just pressed using fingers to the speaker terminals. I can post a pic if you want

ss80 said:
Nice DIY Sethu, your love for the car is visible in those pictures. Good effort, Good result.
I have a suggestion though. In ICE spares shops you get simple pressing clips, which can be just pressed using fingers to the speaker terminals. I can post a pic if you want
Click to expand...

I have tried in couple of shops here in my area. But could n't find one. So I went for simple electrical male and female plug and it was really use full.

You pls post the pic if possible. Let me try that.
S

Here are a few pictures (different angles) of teh pressing clisp I am talking about. DO NOT PAY MORE THAN 3Rs. for each pressing clip along with the plastic insulator. I got conned last time & I paid almost 8Rs. for these silly things.

These pictures are from my Boss's car. She has a Chevrolet Beat, whenever we need to remove the rear parcel tray we just pull out the clips. No soldering, no connectors & even changing speakers wont be an issue. This installation was done by the Showroom guys, It is also a sign of cost cutting not just user friendliness. 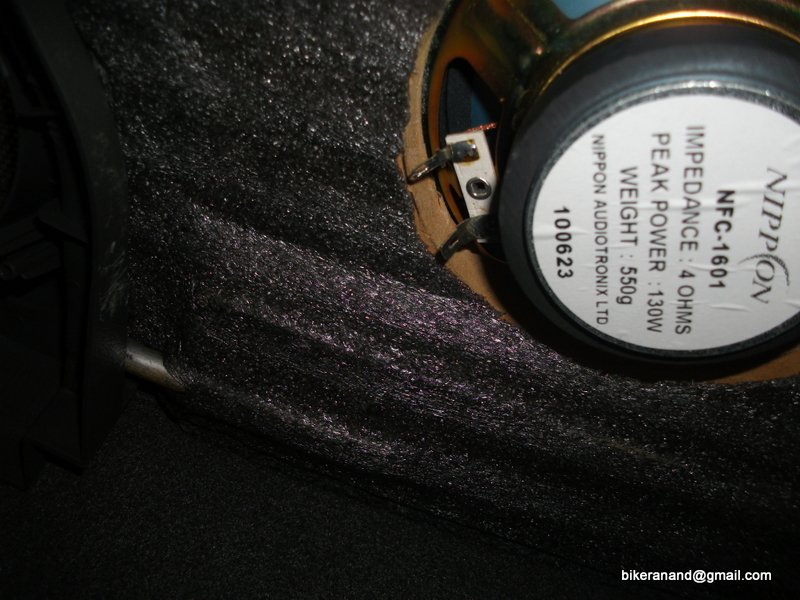 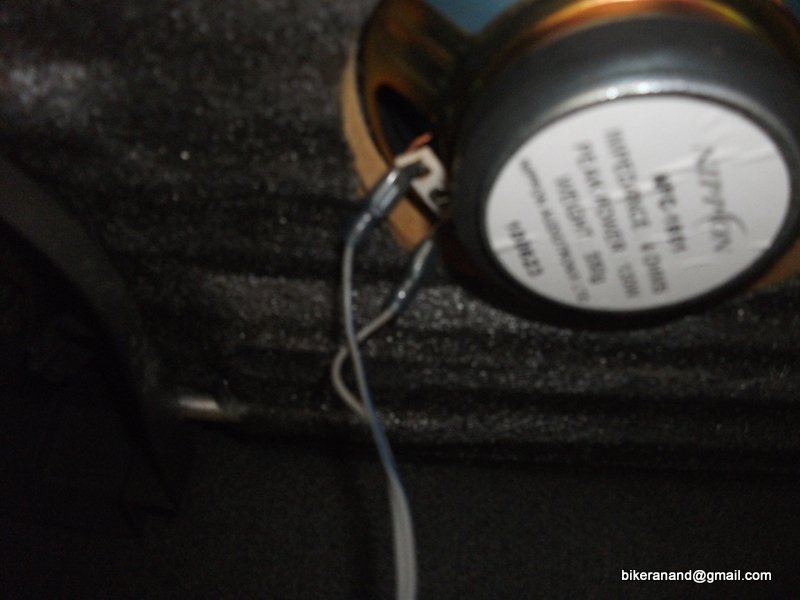 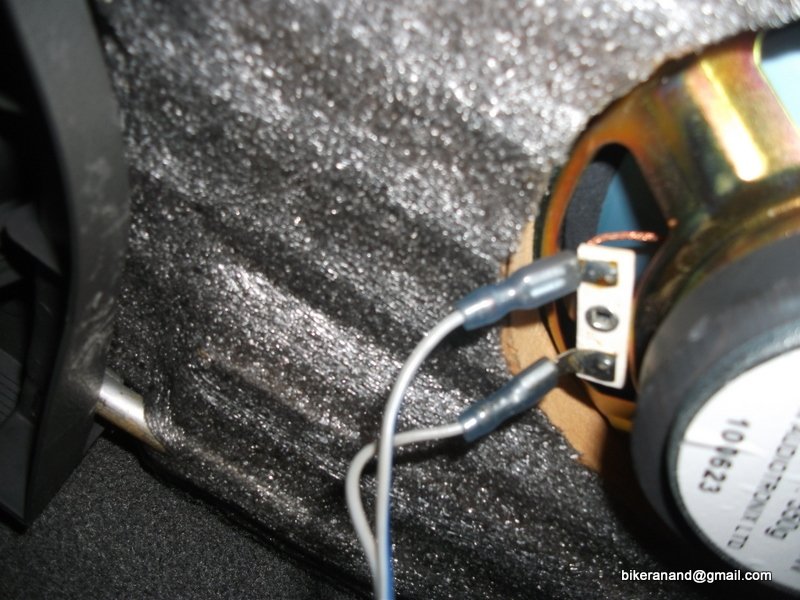 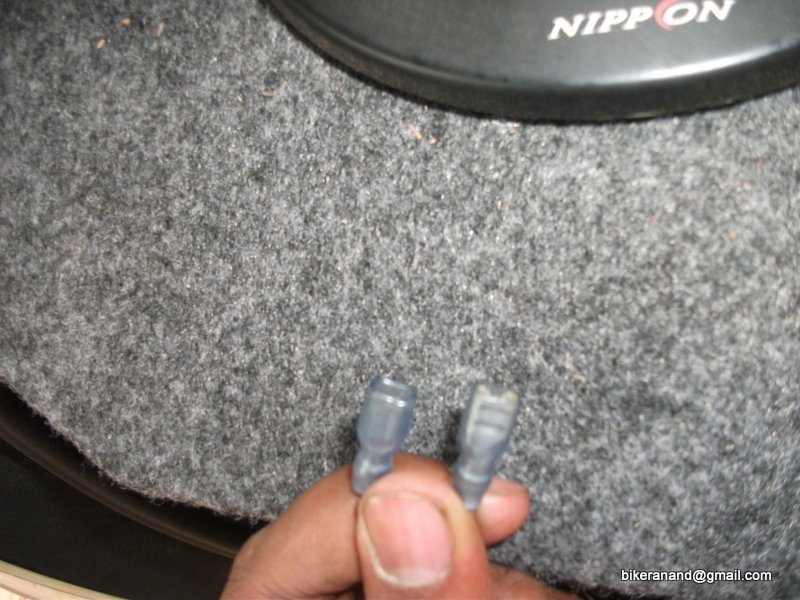 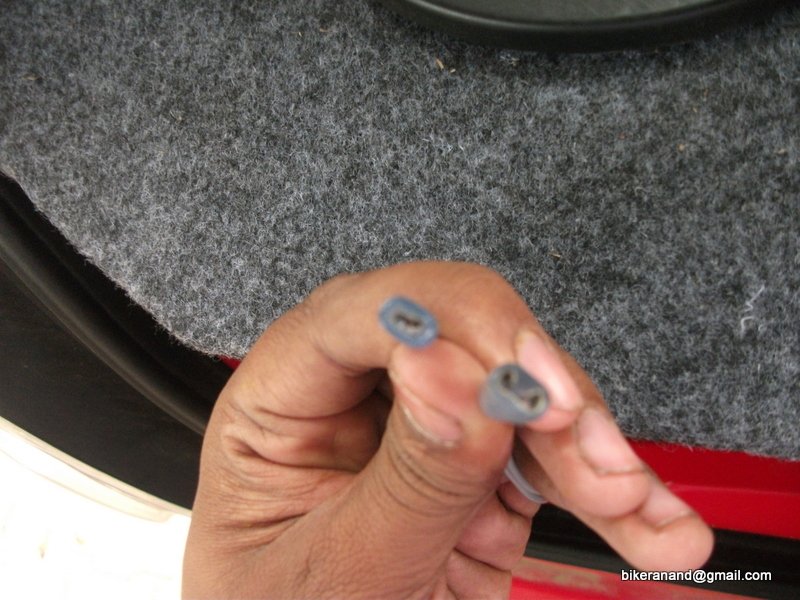 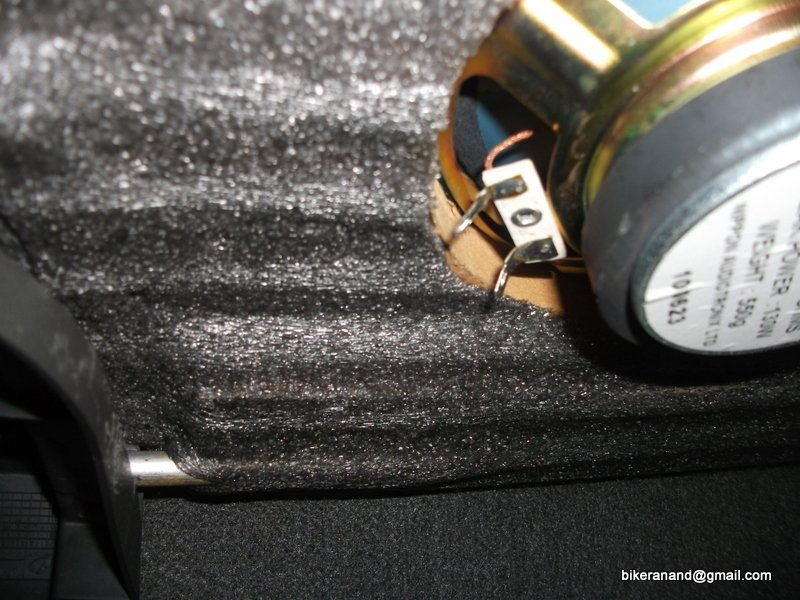 Mr. SS80, Thank you very much for sharing the photos and information. But actually this kind of clip only used earlier. but that created me lot of porblem. it got loose very frequently and the performance of the rear speaker go for toss. may be getting loose could be because of the loose wires and when ever i use the boot the clips got loose.

I was expecting that you will are planning to show me some alternative for the normal plug i was talking about.

Now I have to do something for moving the right speaker to the right extreme to have stereo effect fully.
S

Hmmm what about placing your speakers on the gaps right& left of the luggage area? or on the hatch door? is there space, because that gas tank will eat up a lot of space I guess.

One more alternative can be those 3.5mm male & female pins available in any electronic shop. I am sure they are the best solution. No quality loss, one time soldering, 10Rs a pair, easy to disconnect & reconnect. Just try that also, you might love it.

ss80 said:
Hmmm what about placing your speakers on the gaps right& left of the luggage area? or on the hatch door? is there space, because that gas tank will eat up a lot of space I guess. .
Click to expand...
I asked the ICE shope guy on the first day itself about having the speakers in luggage area but he said it will not be possible. I do not know the possibility of hatch door. IN my previous m800 the rear speakers were fixed on hatch door only.


ss80 said:
One more alternative can be those 3.5mm male & female pins available in any electronic shop. I am sure they are the best solution. No quality loss, one time soldering, 10Rs a pair, easy to disconnect & reconnect. Just try that also, you might love it.
Click to expand...

As you have suggested I wanted to go to some electrical shop for soldering prefessionally. But there was no time. when i go there he will not be available. when he was available I was busy. Then the time was going like this without rear speakers. One fine day I decided with simple electrical male and femal plues and it is perfectly working.

Friends this DIY was very useful during my recent trip to Nagapattinam to my sister's home. We had some luggage which was not properly set into boot. I just removed the plugs and took of the parcel trey. Kept the baggage and had a safe trip.

instead of using the 3.5 mm male female.I prefer u to use the cable tv male female.its cheap and u will have a lot of space between the positive and negative points.I have used them and they really do the job

first I used 3.5 MM male/female pin. But it did n't workout well. Then I did it using normal electrical plug and It solves the purpose fantastically.
You must log in or register to reply here.