Could Roads Made From Plastic Become a Reality in India?

When you hear the word 'plastic', it's usually followed by a twitch of the eyebrow and a nod of the head. That's because we all know the harmful effects of using plastic. The 2005 floods in the city of Mumbai are a stark reminder of how plastic clogged up drains, leaving the city submerged for nearly 2 days. Post the deluge, there has been a ban on plastic in the city but what if there was a way to recycle all the discarded plastic and use it to make roads? 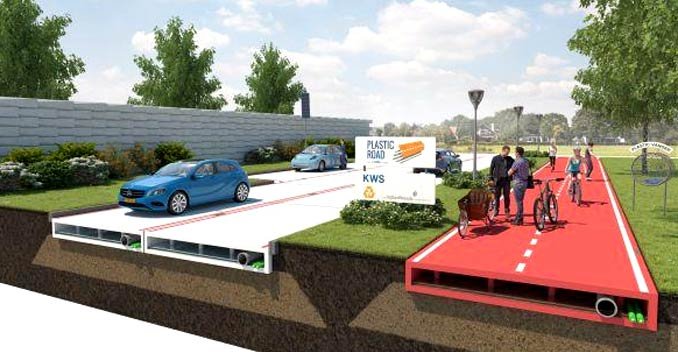 Considering that the country generates tons of plastic waste on a daily basis, you would think that somebody would have looked into it and they have. A Bangalore based company called K.K. Plastic Waste Management has built more than 3000 kilometers of roads using plastic waste. By mixing plastic with asphalt a compound called polymerized bitumen is formed and when used on roads, it can withstand any form of weather, thus adding to the durability.


The technology is not new and the owner, Rasool Khan, has been researching on creating such roads from 1996 in India. It was in 2001 that the first trial track was created and in 2009 they already had 1200 km of road made from polymerized bitumen. "When we first brought out this concept, there was a lot of interest generated. People from all over the world came to see how we achieved the feat of making roads from recycled plastic." said Rasool.

The technology is not restricted to Bangalore though as Rasool points out that they have made a 7 km stretch in Hyderabad too around four years ago. The advantage of having a road made from polymerized bitumen is that its life is increased, it is water proof and costs just the same.

India might not have given this technology a serious thought, but a Dutch construction company is considering these roads for the city of Rotterdam. VolkerWessels and KWS Infra have teamed up to develop the plastic road for the future. The road is designed to be eco-friendly and will be constructed out of recycled plastic. As you can see in the picture, there will be a hollow portion which will make way for piping and cabling underneath the surface of the road.

These roads will be built using prefab construction, which means that they can be made quickly and ensure that they are of the highest quality. According to the people at VolkerWessels, the plastic roads are resistant to corrosion and weathering and can withstand temperatures ranging from -40 to 80 degrees Celsius.

Using plastic to make roads is one way then, of recycling it and considering that this is the motive which comes under the 'Swacch Bharat Abhiyaan', it's time we Indians gave it a serious thought.
Source:www.auto.ndtv.com

Nice information.
But doesn't this questions the control of vehicle s running over it compared to tarmac?

As far as I know,this is not just roads made of plastic.It will be a hybrid of plastic and the conventional way of making roads using tar or cement.The main attraction is the recycled plastics rather than new plastic.

dear everyone wits plasticised Bitumen not only plastic. this mixture reduces the wear and tear thus providing a good road for a long period. its a polymerised bitumen not plastic alone as it says in the first post.
A

Is it cost affective compared to investing on solutions to improve durability of current roads ?

thats the whole point it came into picture its very durable and economical.

aysrinivas said:
Is it cost affective compared to investing on solutions to improve durability of current roads ?
Click to expand...
The icing on the cake is the reuse of plastics which are not biodegradable.
A

incarnation said:
thats the whole point it came into picture its very durable and economical.
Click to expand...
I do not see the article mentioning about per kilometre cost comparison or cost benefit ratio in the long run(it just mentions it costs same) . Yes plastic roads may be more durable but at what price ? I know, recycling plastic sounds good but if it costs more to build roads then there are other ways to recycle plastic. Then there is another question of carbon foot print per kilometre construction . Also I am not sure if they have tested durability of these roads in real Indian conditions like use/abuse by humans , cattle, bullock carts etc.

The technology itself seems to be there for more than 15 years and I wonder why no one in the world has used it in large scale until now? and I am sure there must be some good reasons for that.

Lets not put hope before evidence and faith before logic. Until the manufacturers make a good case for advantages in multiple domains it will just be a novelty product.
Last edited: Jul 18, 2015

How will this roads be effective to the tires when driving at good speed? Will this give enough traction?

Supply and mixing of K K Poly Blend for asphalting of roads
We undertake contract of Supply of sole mixing of K K Poly Blend directly in hot mix plants for asphalting of roads. Bruhat Bangalore Mahanagara Palike is the client which has undertaken construction of 2000 km using 8000 tons of plastic. We have signed a Memorandum of Understanding since 2007 for supply and mixing of plastic waste in all road works.

This is the company web address probably he will be in a better position to answer you than me.

K K Plastic Waste Management Ltd
You must log in or register to reply here.