Chevrolet is planning to get its all new SUV, the latest Trailblazer, to India.

GM is hoping to assemble the Trailblazer at its Halol facility, where it currently carries out all its CKD operations and expect the SUV to be priced around Rs 17 lakh.

Slated to compete with the likes of the Toyota Fortuner and Ford Endeavour.

But then what will happen to Captiva?

When can we expect this ? Captiva will be dean

Lord all mighty WHAT LOOKS!!!! C'mon GM bring this as soon as possible at 17 lakh it will be one awesome buy T-Fort not withstanding!

The front looks similar to the ford ecosport.

Superbad said:
The front looks similar to the ford ecosport.
Click to expand...
Yes that was the first impression after seeing the picture.

This SUV somehow miss that muscular look and stance in this picture. May be need to see more pictures from other angles too.
V

Trailblazer is a SUV that will compete against the Ford Endeavour and the Toyota Fortuner. This has three rows of seating for seven people and is about 4800mm long. The Chevrolet Trailblazer will make its way into India in the second half of 2015. 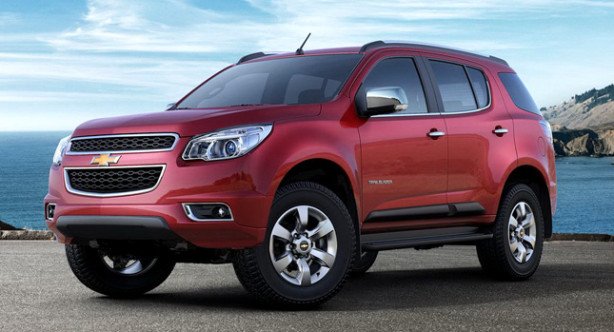 Chevrolet will bring this to India in the CKD format from its facility in Thailand.

Chevrolet will be launching the Trailblazer in the second half of 2015 with a 2.8-litre diesel engine. A choice of two drivetrains will be offered – a five-speed manual transmission and a six-speed automatic featuring electronic shift-control with clutch-to-clutch capability and an electro-hydraulic control module. The 2.8-litre engine is rated at 180bhp and 470Nm with an available six-speed automatic transmission 440Nm with a five-speed manual and will be available in 4×2 and 4×4 variants.
Click to expand...
The Trailblazer gets the following safety features:
Electronic Stability Control
Anti-lock Braking System
Hydraulic Brake Assist
Traction Control
Dynamic Rear Brake Proportioning (first use of Rear Drive Brake in the market)
Electronic Brake-force Distribution
Panic Brake Assist
Engine Drag Control
Hill Descent Control
Driver and Occupant Air Bag Protection
Click to expand...
Chevrolet Trailblazer coming in second half of 2015-Exclusive - MotorOctane

Re: Chevrolet's SUV- Trailblazer to arrive in mid 2015

Chevrolet had planned to bring this Trailblazer some time in 2012 but was held back due to it being Expensive for Indian Market even as a CKD. So now they have planned to launch it and is a good option for SUV Seekers. Now I have 2 questions
1. What will Chevrolet do with Captiva ? Discontinue it ?
2. Is Chevrolet concentrating on Utility segments? (CUV, MPV, MUV, SUV) ?

Chevrolet, the American auto manufacturer, is spotted testing its full size SUV, the Trailblazer once again. This bruiser was spotted near Hyderabad on Hyderabad-Mumbai highway. There were a total of 2 vehicles moving together covered with heavy camouflage but a few elements like the headlights, taillights and alloy wheels sneaked out. Also, the headlights are projectors, the tail lights are LED’s and alloys are same as the vehicle present in markets like Thailand. On the contrary, the spied Ford Endeavour in India had non-projector as well projector headlamps. And the word is Trailblazer will get these feature as standard with the absence of a toned down version.

Speaking of engine, like the one present in Thailand we will also get the advanced 2.8 litre Duramax diesel that puts out 197 Bhp of power and a whooping 500 Nm of torque. Moreover, there is a 2.5 litre 163 Bhp-ed motor also available overseas, but we might only get the former.

Dimensionally, the Trailblazer stands at 4878x1902x1847 (LxBxH) making it a mammoth for the segment comprising of cars like Fortuner, Pajero and Santa Fe that are all smaller than Trailblazer. Following such large dimensions there will be generous amount of space, to be precise it will be class leading. The interiors will also get good creature comforts, contemporary styling and shift-on-fly toggle.

SUV under test caught by a telugu daily. Endevour or Force One

A leading Telugu daily spotted this car and published in their daily it looks like either Endevour or Force One.

The most hilarious part is he writes that anyone keep his car under cover whe parked at home. But these two riders covered their car even on road to prevent daily cleaning. 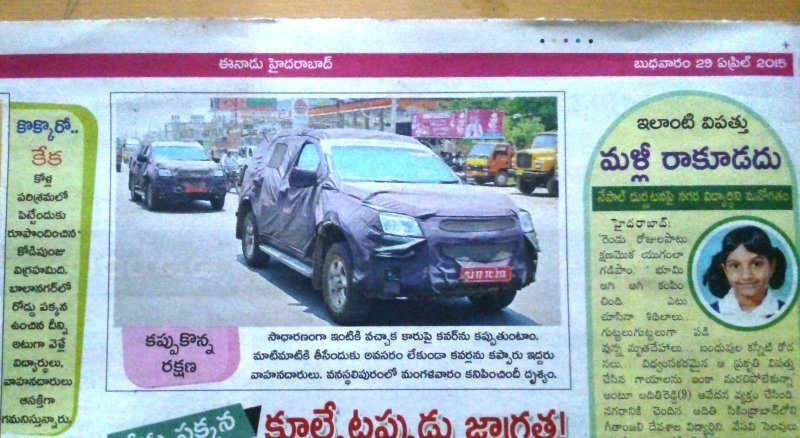 No comedy over. This looks like a newer version of Force One.

Closely look at the front monogram inside camouflage.

GJ registration. Could be a Ford or a GM.

Reuters, in an interview with Stefan Jacoby, Executive Vice President Consolidated International Operations, reports that the American car maker will launch the Chevrolet Trailblazer in the second half of this year.

The Trailblazer will be the most important launch for GM in India this year, and the first to build the brand image of the company after it introduced products like the Sail, Sail U-VA and Enjoy, which were originally cars developed for the Chinese market.
While the company has confirmed a launch of the Trailblazer for 2015, it is yet to announce if it will take the CBU or the CKD route, the latter allowing it to price the vehicle competitively thanks to reduced taxes.

In the Philippines and Thai market, GM sells the Trailblazer with 2.5- and 2.8-liter four-cylinder diesel engines. Sources tell Indian Autos Blog that it is the latter, which produces 200 hp and 500 Nm of torque, that will be made available in the Indian market. 6-speed manual and automatic transmissions are available with this engine as is an AWD system.

The Trailblazer was given an update earlier this year, and now features improved NVH levels and additional features such as the MyLink touchscreen infotainment system and a piano-black finish for the center console.

The Trailblazer’s biggest competitors, the Ford Endeavour (Ford Everest) and Toyota Fortuner, are heading for their full model changeovers with Ford expected to launch the new Endeavour by the end of this year. The 2016 Fortuner would be introduced next year in India.
Rivals: Ford Endeavour, Mitsubishi Pajero Sport, Toyota Fortuner
Expected Launch: H2 2015 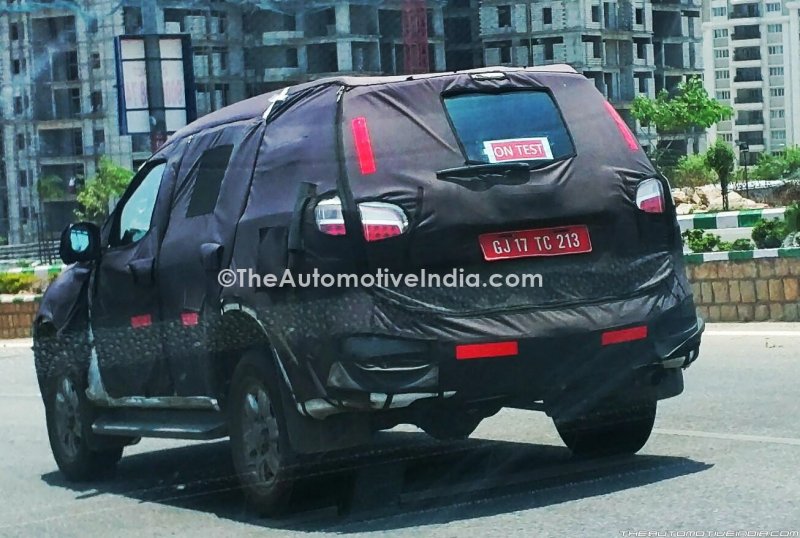 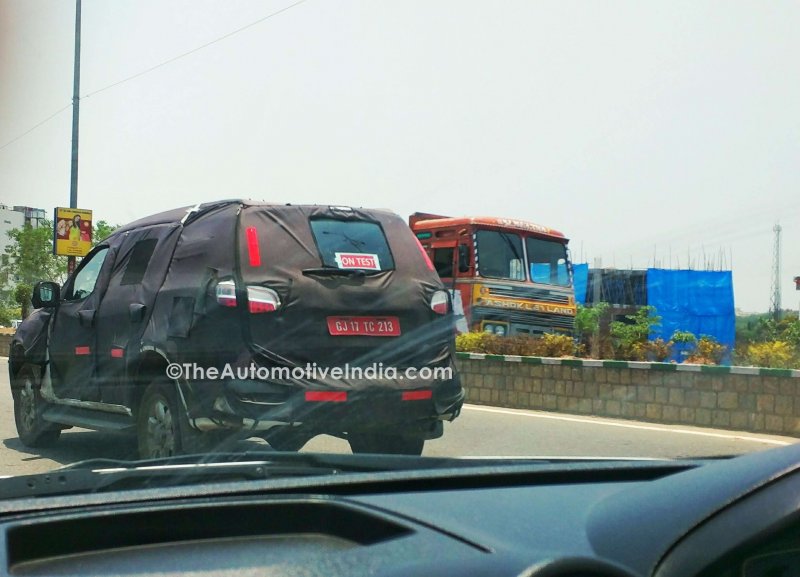 General Motors India is currently testing both the full-size Chevrolet Trailblazer SUV as well as the Chevrolet Spin MPV in Rajasthan, India. The company’s big-ticket models were spotted with hardly any camouflage, giving us a good look at their exterior.

The Chevrolet Trailblazer is based on a body-on-frame architecture from the Colorado pick-up truck, and will be brought to India as CKD kits from Thailand. Owing to its large size, the Trailblazer can accommodate seven passengers, will be trimmed with premium materials and upholstery, and equipped with Chevrolet’s latest-generation MyLink infotainment system, among other features.

The Spin MPV was confirmed for the Indian market by GM in February, and it was learned later that it will be manufactured with tools shipped from the shuttered Indonesian plant. The Maruti Ertiga rival features a simple exterior design with elements from Chevrolet’s newer design philosophy. In top-spec, the 2+3+2 configuration MPV could be equipped with a music system compatible with USB, AUX-in, Bluetooth and optional satellite navigation.
The Chevrolet Trailblazer will likely pack a 2.8-liter diesel engine capable of 200 hp at 3,600 rpm and 500 Nm of torque at 2,000 rpm, while the Spin MPV, abroad, features a 1.5-liter four-cylinder petrol engine producing 107 hp at 6,000 rpm and 142 Nm of torque at 3,800 rpm.


In other markets, both models come with a 6-speed automatic transmission, as well as a manual option. The diesel option for the Spin is likely to come through the usage of the 1.3-liter Fiat Multijet engine that is serving on the Sail and Enjoy.