I had this small issue after I upgraded the brakes. Simple problem, simpler solution

The air filter box was touching & passing the vibrations to the booster unit! As the new booster is slightly more in length than the old (non booster)one.

Spoke to Varun (actually he had predicted this on that day itself & also the solution was ready) & did a small change to the air filter box.

so cut that entire section

Now the sound has changed (intake sound) and engine breathes easily than before.

Please Note: This does not do any harm to your engine/ any parts. Air is still sucked through the air filter only. Instead of that long L shape suction, now its shorter. To create a dent, remove the air filter box & then hammer, do not hammer it when it is in the engine bay! 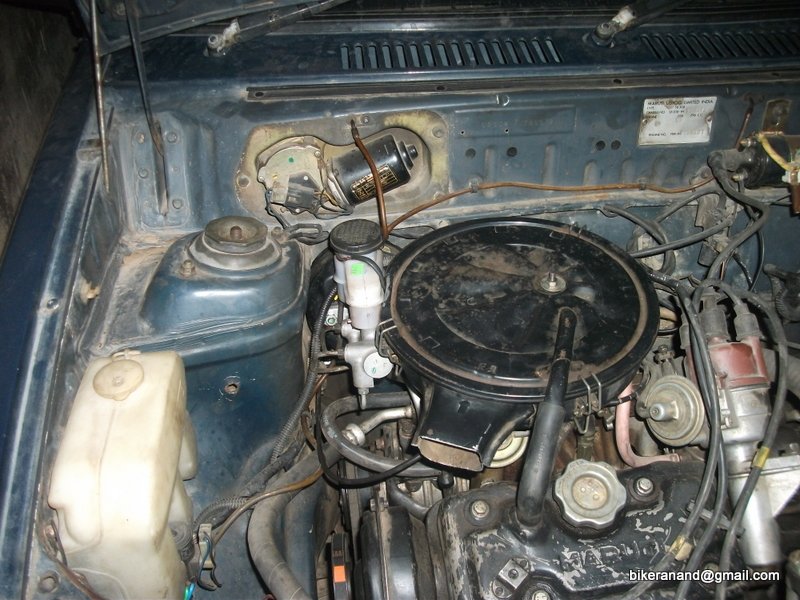 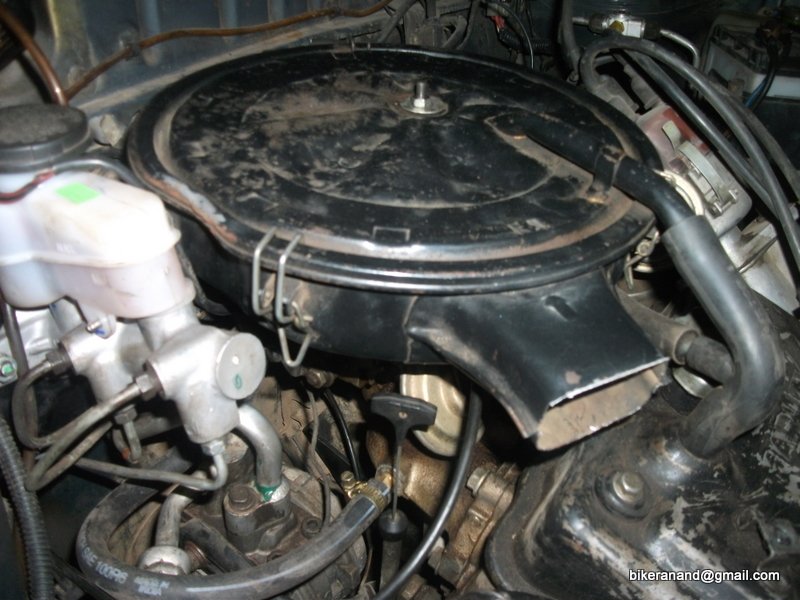 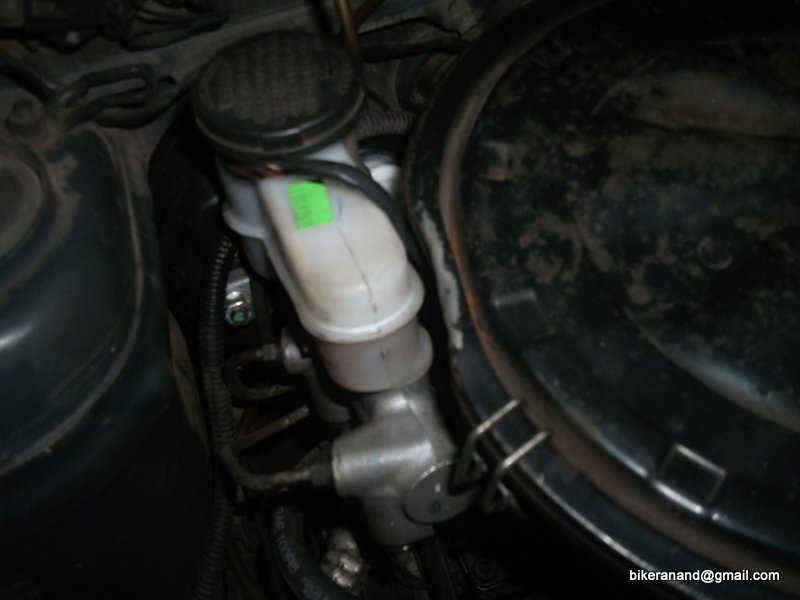 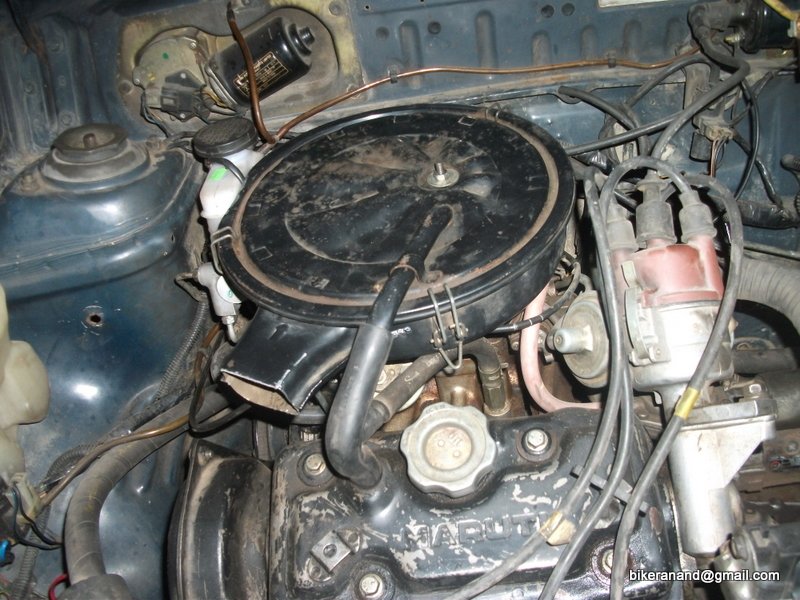 Did you start the engine after doing this to check whether the air filter touches the booster cylinder..
S

Oops, dint try that, but the dent I made is large enough I feel, Will check that tomorrow morning @ Sunrise.

Did you try stuffing in some thing soft like a thick double side tape between them before you decided to hammer it? Probably that would have worked too.

Here is the pic taken from SS80's car, showing the vacuum pipe connection in carb 800..

Earlier I had uploaded the vacuum pipe connection in a MPFI 800..

Add some foam / soft rubber material between the air filter and the brake fluid reservoir.
S

I checked it today, the clearance is gud. The booster reservoir is no more in contact with the air filter even if engine is switched on
A

Wonderfull and needfull job done by you ss80. Most of us have owned or ddriven M800 and everyone know that brakes are big let down in this car. I also used to think for brake upgrades when I had one but never could be able to find such upgrade.

ss80 said:
Hi all,
Since the day I bought my car. The brakes have given me enough sleepless nights. On the highway, the car was like a brake failed car, after 30Kmph the wheels wont even skid on sudden braking.
Click to expand...
I am sure half of M800 owners still use the stock brakes, they need to test drive one of our cars and will know how much of a difference this booster makes. Infact previously, I never crossed 50Kmph mark with 4 people on board, unless I have toooo much of space to slow down.
Click to expand...
on my way back home, I was at speeds of 70+ and could clearly feel the difference! NO MORE standing on the pedal, smooth & feather touch operation it gets better and better as the speed increases.
Click to expand...
I cant believe that I used to drive on those horrible stock brakes! Nothing is more important than safety, safety of both passengers & pedestrians.
Click to expand...
You explained very well about stock braking abilities of M800, I couldn't stop laughing when I read these paragraphs

As you and Varun have successfully implemented the brake upgrade, its highly recommended to everyone who owns/drives a M800.

I have one fitted on my carb 97 800.Fitting to a carb car requires some parts that are hard to find if you are getting it installed at a M.A.S.S(maruti authorized service center).For carb cars I would suggest buying a KBX kit that maruti uses itself.It kit comes with a master cylinder with vacuum booster,T- joint which fits to the intake and a vacuum pipe and a round white joint to which the vacuum pipe attaches on the booster end and the extra brake line.The T-joint has 3 inlets, one screw end fits into the intake manifold one goes to the FICD and back to carb(only for a/c cars-you need to seal it with a brass nut if you dont have an a/c) and one for the vacuum pipe from the booster.

The fuel injected cars dont need all these parts and just the master cylinder with booster ,vacuum pipe and extra brake line if needed so these should be available with the M.A.S.S, if you have any difficulties understanding me just pop the hood of a maruti zen(not estilo).

Carb zens, esteems and fuel injected zens and esteems are fitted with boosters(although the boosters are bigger in size)and should be looked at if you have any difficulty installing it on your cars.Get this job done at a reliable garage,brakes are really important and if the job is not done properly can be dangerous.MGP provided all the brake booster parts for carb cars too, who knows what happened and they just stopped now its only for fuel injected cars.Hence KBX kit for carb cars and MGP ones(also made by KBX) for fuel injected ones.

This is the exact kit that has been posted on page 1.All the parts that are essential for fitting the booster on a carb car.
@ss80, it would have been a good idea to get the drum brakes serviced as well at the same time.
S

The mechanic has asked me to come back tohis garage afetr I complete some 200kms so that he can adjust the rear drum cylinders, I guess it will be done at that time. Also getting the carb cleaned.

That seems to be fine, get your carb overhauled at a good garage.Hopefully your secondary butterfly isn't jammed.I had a jammed secondary on my old carb so hard to search hard to find one.The original mikuni ones are hard to come by, try and get those if need be or pacco ones that are made locally.

So I just got a new carb and fitted that one and now the car runs beautifully.I have retained the old carb and work on it when I can find time.Pet project

First of all many many thanks for posting a detailed description of your brake upgrade procedure . I am a owner of a 1996 carb Maruti 800 . Although I don't have any complaints with the stock non boost assisted brakes ( I have driven at 100 kmph with 3 passengers plus me , no issues ) , I am interested in upgrading the brakes with a KBX booster kit like yours .

I have two questions though regarding the modification .

1st : Since the booster is feeding off the intake manifold for the vaccum , does it affect the engine performance in anyway , such as reduced pick-up ? Has the fuel efficiency been affected ?

2nd : Since the pipe feeding off the intake manifold is of rubber ( it looks rubber to me , correct me if I am wrong ) , if it ruptures , will we lose all braking power or just the booster assist ?

Engine performance reduces only when the tube ruptures, it isnt a thin tube its a proper vacuum tube.You can cover it with a corrugated plastic cover.If it still ruptures the brakes return to their mechanical self(how they were before booster was added).The booster only works when the engine is running else its just like your factory mechanical brake.
You must log in or register to reply here.