i think i have took 4 to5 pics of that mustang.

Beautiful Pictures Ilango and Surender. You guys should also share the details and experience about the event.

This was just a small event.
there was a exhibit in island ground. two days later , they came as a rally to pondicherry.

started from chennai at 9 am and reached pondicherry by 2 pm.

the cars were halted at the port. safe from public. car owners were really so affectionate to there cars.

I came a little late than surendar. hold up at construction work and damn the atm's were eating my time. so i missed the running \rally at beach road. When i came all were parked.

Started to see each and everything keenly.some rush was there. Majority of them had no idea about the even. They had just came to beach.

when i was observing almost the end(4 cars were remaining) they made the crowd aside as ministers were coming and inauguration was about to begin.

then a minister went a round in MG-TB (last 2 in 1st set of picture).

Then public were not allowed to stand near the cars as earlier.(surendar had chances even to sit inside)
i was about to leave , i saw a relatives face , shocked to see him and had come in a fiat to participate in this. He said the difficulty to run this even and even said this is just 2% of car in Tamil nadu


Among this there were 3 pondicherry cars
1. A beetle
2. willy jeep
3.Citroen traction avant familiae , its also ms guhan's car but is in pondicherry(he brought 13 cars)

Apart from this i know some benz and cadilac present in pondicherry , but they did not turn up.

Over all it was a nice show. 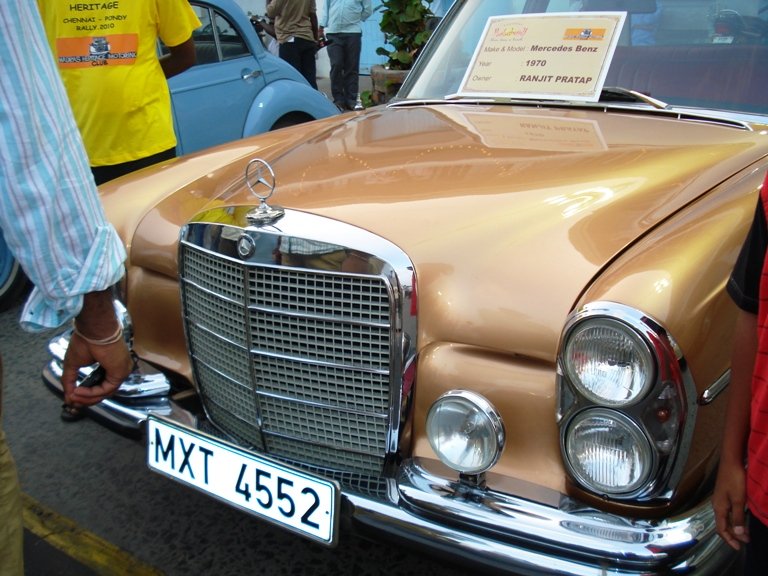 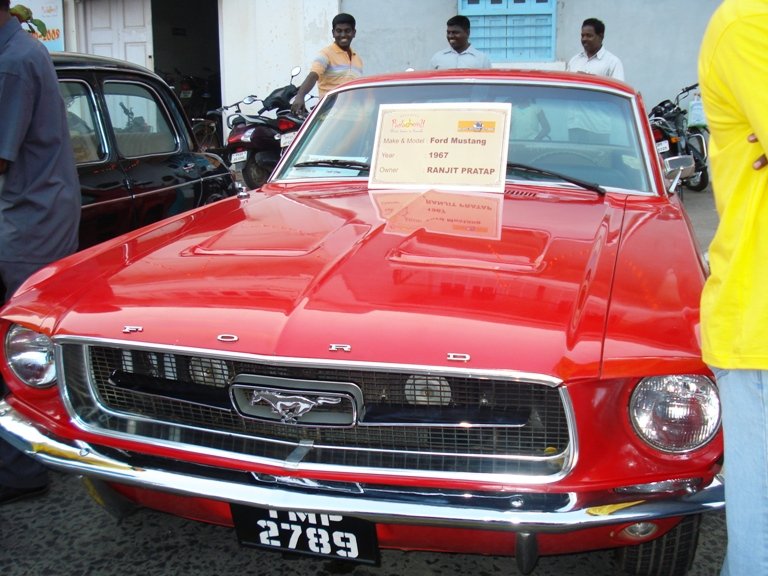 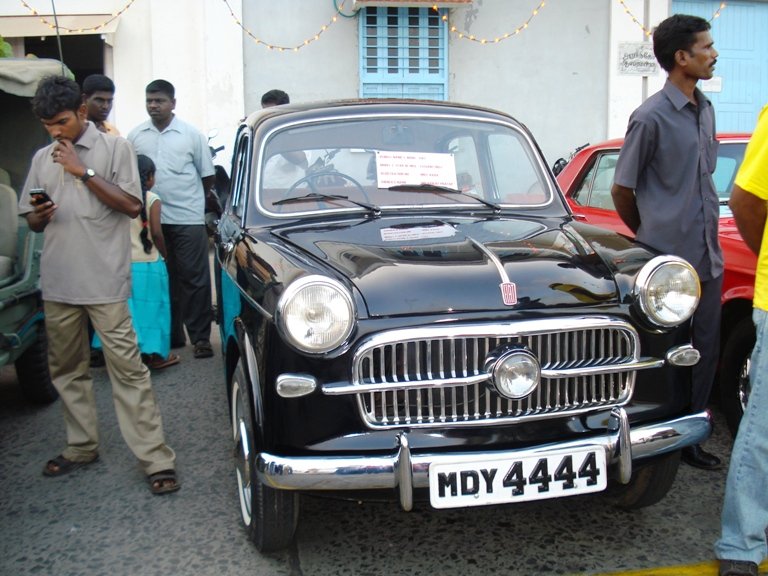 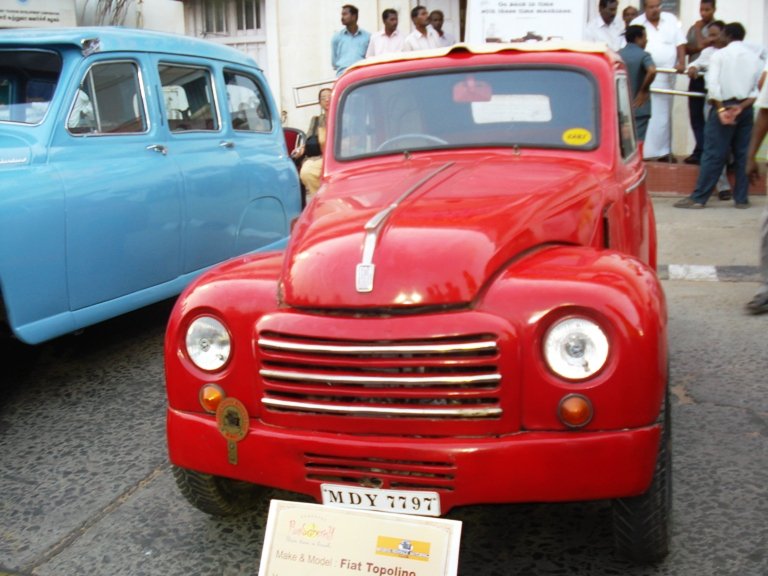 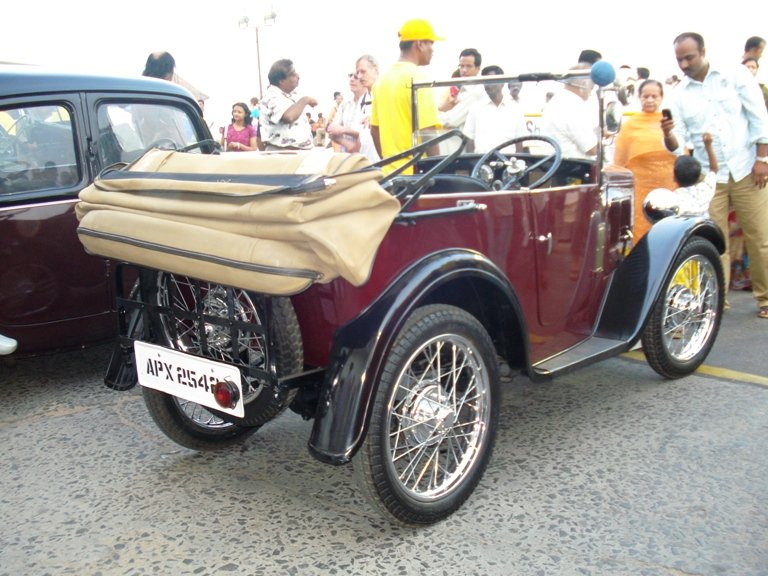 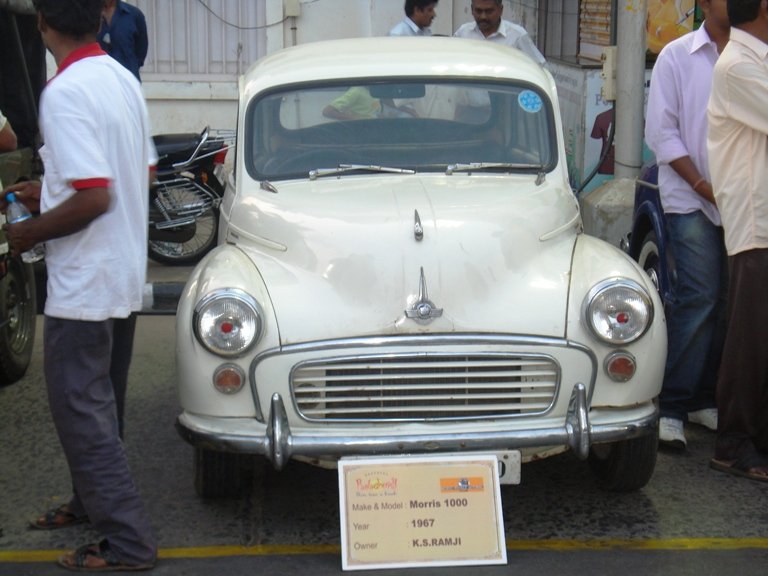 that mustang had a automatic transmission , new seats etc. Only it was in perfect and showroom condition

Most of the oldies are in mint condition and the Fiat Topolino (Pic. 4) is looking different. Also, I notice that Mercedes and Mustang are owned by same person.

Here is a small report which i read in paper about this event!!

The youngest in a family grabs all the attention. Some families make an exception. Like this one, which took a trip down the East Coast Road last weekend. While having a spot of relaxation near Marg Swarnabhoomi's project site, close to Mudaliar Kuppam Boat House, this family reverentially let its oldest member — a 1927 Austin Chummy – stand in front and hog the limelight. We are talking about a family of vehicles whose specialness lies in defying time.

An overhead Marg banner said, “We laud the spirit of the golden oldies.” Laudatory efforts by their owners had brought these vehicles so far. They would go even farther; their old engines would cool off only in Puducherry.

Chennai to Puducherry is an unduly long distance for these oldies. The fact that the cars, numbering over 30, made the trip and back, with only minor hiccups along the way, underlines the meticulous planning by the Madras Heritage Motoring Club.

While the rally encompassed roles by the tourism wings of Tamil Nadu and Puducherry, messages about heritage preservation and a socially-responsive performance by a villapattu troupe, it was not just another staid awareness campaign.

The car owners had a rollicking time. There were quips, cranks, good-humoured barbs and insider jokes. Viji (treasurer, MHMC) said, “Bally (president Balraj Vasudevan) is a picture of concentration. He's driving a big car.” Bally was at the wheel of M.S. Guhan's huge Chevrolet Skyline; and Viji was alluding to the dimensions of Bally's car — a 1926 Austin Chummy. Had it participated, this Chummy would have been the oldest.


Maya Ganesh was a surprise. The biker girl was at ease rolling the wheels of a left-hand-drive Willys jeep, her uncle Selvaraj's. She kept pace with her friend's modern vehicle, overtaking it regularly. The engaging race was disrupted when the Willys stopped for want of fuel. Maya had filled the tank just before Prarthana Drive-Inn Theatre, the starting-point of the rally. With good friends to watch out for her, she was back on the road.

Participants drove their machines resting in the thought that a retrieval team, headed by Mohammed, was just a call away. M.S. Guhan, Bally, Ranjit Pratap, Sumanth, Viji, Lachu and Kylas were among those who played an administrative role and steered the rally to an incident-free completion. As usual, Ranjit brought a fleet of machines to spice up the event. So did Guhan.

The tourism departments played the perfect hosts, entertaining their guests at their best facilities. In Puducherry, they stayed at Anandha Inn. The vehicles were also given a good place to stay. The shutters of the warehouse at the old port were pulled up for them. The old vehicles cooling off with their hoods up was a pleasing sight.

I read in the newspaper on 5th that there is a vintage car rally from chennai to pondy.Then,that night,I got a message from Ilango about the same.I said i will try to come.I was free on that evening,so,I went to the beach,at that time,no cars were there.Then one by one,all the cars came from the old harbour to the beach road and halted for the display,then all the people around there came to have a look at the cars.Then,I started to take photos.
I have attached the maximum number of pics with this,I will post more soon.

While taking photos,a few people started to touch the interiors of the Austin 7 Chummy and the owner said over the mic,that audience are not supposed to touch the cars.Then,the police ordered for barricades and ropes to prevent people from getting close to the car.Before the barricades arrived,I went near the cars and took photos.Suddenly,my SONY digicam went out of charge,and i took photos with my N73 mobile.
-----------Next Post-----------
Here are the final set of pics.
Here is the much awaited pics of the Ford Mustang.

Cool pics as usual. Thanks for bringing the car live surendar & ilango.

350Z said:
Most of the oldies are in mint condition and the Fiat Topolino (Pic. 4) is looking different. Also, I notice that Mercedes and Mustang are owned by same person.

Drive Safe,
350Z
Click to expand...
That were owned by ranjith pratap(i dont know who is he, heard he is a famous person) he has come down with 6 cars. He came in a s80

Amazing pics, and amazing vehicles!!
Thanks a ton, guys!!

Zinam and aditya,thanks for your appreciation.I had a great time watching the vintage cars.
-----------Next Post-----------
Found this pic,I actually left the beach,and I heard the dog like sounding horn,and then came this car in front of me,I clicked it when it was moving,thats why i couldn't take a better pic of it.

Oh a horn sounding like a dog!! Never heard one still , only heard wolf horns till now!!
You must log in or register to reply here.