Found a video on FB that demonstrates (in actual) and implementation of automated car parking,

A similar parking is inaugurated in Sarojini Nagar (Delhi) but capacity is much lower considering the cars that arrive in the market on regular basis. I’ll check out soon.

Interesting to know about this in new Delhi , do update about them!

The location is nearby my place so perhaps I can make it soon. Just read this article on same for more from The Hindu:

With the number of privately-owned vehicles in the Capital going up sharply every year, parking has become an issue at every major market place. To address this problem, Delhi got its first automated multi-level car parking lot at the Sarojini Nagar market on Thursday. Developed in public-private partnership mode between the New Delhi Municipal Council and DLF, the eight-level “South Square” car park was inaugurated jointly by Delhi Chief Minister Sheila Dikshit and Union Minister of Urban Development Kamal Nath. Built at an estimated cost of Rs.80 crore, the automated parking is expected to ease the parking woes of the busy Sarojini Nagar market with a parking capacity of 824 vehicles. Vehicles will be charged Rs.10 for the first two hours and then at Rs.10 for each subsequent hour, up to a maximum of Rs.40 for a day. The ground and first floors will house retail shops, restaurants and entertainment area and the second to eighth floors will be dedicated for parking.

The automated parking lot has car lifts, pallets and computerised control systems that would be operational round-the-clock. People can use the parking by buying a ‘car park card', drive into the facility and leave the car at the basement, from where it will be automatically taken to the parking area. The parking lot will go through full capacity trials during November and will be opened for public from December 1. “We hope the parking problems of the city will be solved by 2012 with the commissioning of the automated parking lot at Baba Kharak Singh Marg and the completion of under ground automated parking facility being constructed by DMRC [Delhi Metro Rail Corporation] near Delhi High Court,” said Ms. Dikshit . She further mentioned the need for a similar multi-level car parking at the busy Khan Market, and also hoped that the bottlenecks in the construction of an automated parking lot behind Hindustan Times building will be resolved soon.

Mr. Nath exhorted civic agencies like the NDMC and Municipal Corporation of Delhi to take up more projects on the PPP model. “Delhi has been facing the burden of development and progress and a parking facility like this is a much needed step…Challenges such as parking, roads, housing sewage, and water need to be tackled to increase the carrying capacity of Delhi,” he said. Mr. Nath added that the Delhi Master Plan will be revised next year and the “effort is to bring about changes based on the ground situation”. He further indicated that the Delhi Special Laws Provision Act will be extended with suitable modifications to safeguard the interests of genuine persons. Responding to Ms. Dikshit 's concerns about availability of land available for parking, Mr. Nath said his Ministry will facilitate “allotment of suitable plots of DDA and L&DO for construction of parking lots in Delhi”. “South Square” will have common space and circulation spaces like access corridors, lift lobby, lighting and fire fighting equipment and toilet facilities. The automated facility also provides state-of-the-art security check and car scanning technologies.
Click to expand... 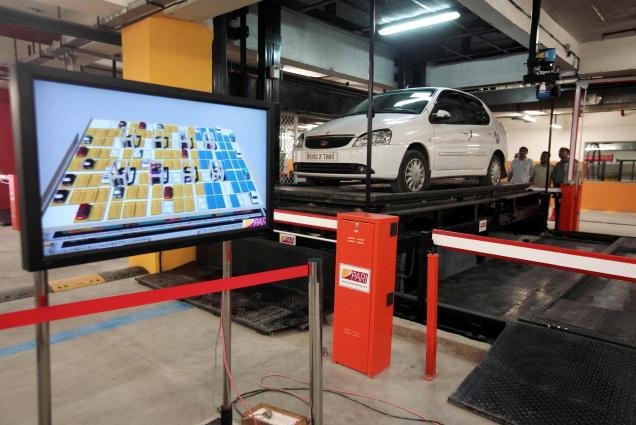 There is 1 parking like this in pune from last years or so on JM road.
Municipal body thinks out of the box to beat space crunch | The Punekar

Thats a really innovative car parking system like in other parts of the globe. But, how long will these take to come to all places to curb the parking mess in crowded areas? BTW, the parking costs seem pretty cheaper considering the features and safety. Are the vehicles scanned before they are put up in the parking?

I have once parked at the JM road automated parking when I had an esteem, its cool. They wont take my ritz now because of the tall-boy design, the swift goes in easily. The parking exists since 2008.

The issue with these automatic parking system I have personally faced is the system is not full proof yet. There are certain times when the system is out of order & you have to wait for couple of hours to get the car back. I had parked my vechile in mall & when I returned the person told that the machine is not responding & the car cannot be brought down. They have called the suport engineer & he will be here soon. This took almost 1 hour for enineer to come & then 30 mins for him to get my car back.

I think this kind of parking is availale in chennai saravana stores in pursaiwalkam and Chandra mall in Arcot road. Both are very good.

I will try postin gosme pictures if possible.

I have used the multi level parking at Sarojini Nagar for a few times now. The charges are on higher side (Rs.10 Per Hour) but it’s so much convenient and safe. The management by DLF is fantastic too. There are helpers on every corner to assist. You just have to park the car on ramp (which they’re also initially doing for us) and collect the smart card. Come back, generate a slip from the kiosk and make payment on a separate counter. It would take maximum five minutes for the car to arrive.

fusion_defusion said:
I have once parked at the JM road automated parking when I had an esteem, its cool. They wont take my ritz now because of the tall-boy design, the swift goes in easily. The parking exists since 2008.
Click to expand...
I park on road only, free of cost.

My friend was telling me that ADP Hyderabad has this

Guys, last time I have told I will try uploading some pics. I have uploaded some old video I have taken. I just found this video.

Chennai, Saravana stores at Pursaiwalkam has multilevel automated car parking. This video taken there. My M800 is taken up for parking. I just dropped the car in the elevator and coming out. My daughter is taking this video. Sorry for the quality of the video. The important point is, its for free if you produce the bill from store. Otherwise it is chargeable. Do not know the cost.

The same kind is available in Fame National Mall, Virugambakkam, Chennai. But do not have any video or picture. Will try something next time. Parking costs here. I think for an hour it is Rs.20 [Not sure]

Back ground voices are my son and daughter.

Note : I had shared the same video in FB. My friend from US [American] was surprised to see this. She was mentioning she has not seen anything like that there. Then I was surprised to hear such a comment from an American. I thought 100% it would have been there, but she might not have seen it. Hope that is the true also.
Last edited: Dec 16, 2012
You must log in or register to reply here.