Local-assembled Audi Q3 to go on sale from next month

Bigger is better, is what generally the Indian concept goes, and Audi is following the same strategy with its current portfolio. The Ingolstadt-based manufacturer is focusing on reducing the cost of Q3 by not just localising it, but also even introducing a low-spec variant on it.

With luxury hatchbacks costing about Rs 26-28lakhs on the road, after all the taxes the car that makes it similar to the cost of a compact SUV. And Indians generally prefer either a three-box or an SUV over an hatchback, which could favour more sales for the Q3 if the locally assembled model will be introduced.

The locally-assembled Q3 will have Quattro as well, however it could miss out on LED cluster and some more bells and whistles on the inside, possibly a lower-spec music system will come fitted, and no sun roof also. This will help them to reduce the cost. Audi is also planning to introduce the front wheel drive version of the Q3 at a later stage. This will mean, that the entry-level Q3 could be priced just like the A-Class or the 1 Series. Volvo has also introduced the V40 Cross Country, however it seems to be more of a hatchback, as the Cross Country generally comes with all-wheel drive.

Audi India will soon introduce more new products in the market like the S6, S7 and by the end of the year we can expect A3 and S3 also to make it into our country. Our sources confirm that Audi will introduce the new RS5 in sometime.

Local-assembled Audi Q3 to go on sale from next month? | CarDekho.com

The Audi Q3 which was launched in India last year is currently imported through the CBU route. Audi India has confirmed to Indian Autos Blog that local assembly of the car would commence sometime in the end of July.

Along with the locally assembled Q3 would come a low cost version of the Q3 with a few missing features. Earlier thought to be called the Q3 Sport, we’ve some new information on this variant.

The cut price Q3 would be called the ‘Q3 S’ and not the Q3 Sport. Internationally, Audi associates ‘Sport’ with their performance models or they use it in the form of ‘Sportback’ to convey the design of a car. Calling a Q3 which has been conceived to appeal to the price conscious as ‘Sport’ is not something Audi wants to do, our source informs us.

The Q3 S is likely to be priced at about INR 25 lakhs (ex-showroom). Features such as the panoramic sunroof would not be seen and the Audi Quattro system would give way for a front wheel drive layout.

The Audi Q3 S will be announced in India during the second week of August.

Whats not there compared to the other variants
No front powered passenger seat
Seat memory
Sat nav
Xenon headlamps(oh,oh)
Led daytime running lights(lost half its glam value right there

Audi’s Q3 is the company’s best selling model in India so far. In the last one year of existence, it has been adding a major chunk of units to Audi’s monthly sales. However, competition is upping the ante with newer models launched or expected around the similar or slightly lower price bracket.

Volvo launched their V40 Cross Country, Mercedes has introduced their smallest A-Class and BMW is coming up with 1-Series. To counter this onslaught, its well known that Audi is preparing a stripped down price cut version of its Q3 SUV. The car has been caught testing in India and now we have its launch period reports sneaking in.

The most affordable Audi yet is all set to be launched by mid-August. Audi has taken fairly extensive cost cutting measures in order to price this entry variant of Q3 as low as possible. The car is expected to be powered by a detuned version of the 2.0 TDI diesel engine found in the current Q3, expected to churn out about 140PS and 320Nm of torque which is significantly lesser than the standard’s 175PS and 380Nm.

The transmission has taken a hit too with the 7 speed dual-clutch automatic being dropped for a 6 speed manual gearbox delivering power only to the front wheels instead of all four through Audi’s Quattro all-wheel drive system.

Prospective owners can expect premium features such as leather seats, climate control, 18-inch alloy wheels, cruise-control and Audi’s MMI infotainment system with Bluetooth connectivity. They will, however, miss out on other goodies such as electrically powered front seats, rear-view camera as well as Audi’s trademark daytime-running LEDs.

Though not in body composure sense, it will fight against the luxury hatchbacks like A-Class & the upcoming 1-Series in the price/segment range, including the V40 Cross County crossover. Expected at an ex-showroom price of around 25 Lakhs rupees, this locally assembled Q3 will be Audi’s cheapest offering in India for now.

Audi Q3 Sport launch on the 19th of August

The Q3 comes with an option of 2.0-litre petrol and diesel engine options and the Sport will be offered with a diesel mill. The Q3 is one of the best selling vehicles for Audi and the Ingolstadt-based manufacturer will focus on SUVs than new entry-level hatchbacks. We can also expect a front-wheel drive 140bhp version of the Q3 possibly next year. This will come mated to a six-speed transmission.

The company has already started working on its plan to get the A3 to India. The A3 e-tron was showcased at the 2012 Auto Expo. The A3 could be expected to come by the end of this year or something early next year. The S3 will also make an entry into the Indian car market, at some point in the future.

Audi Q3 Sport launch on the 19th of August | CarDekho.com

Frankly speaking its not worth it... a front wheel drive Q3 with manual transmission is not what you should be driving.
The Quattro with 7 speed stronic is the ultimate Q3.
There is also the petrol 2.0 tsi which does 211 ps and is used in the TT too.
The Q3 is being manufactured at Martorel, Spain. The Q3 sport is being assembled at Aurungabad.
Bummer alert: Only 150 of the sportline would be made.
S

Audi's corporate edition i see. They shouldn't have detuned the engine, but i guess the gear box and front wheel drive couldn't handle 177 bhp otherwise.

Audi Q3 S Edition will be unveiled in a short while. The exact price can be seen at bookmyaudi.in on 2:30 PM. 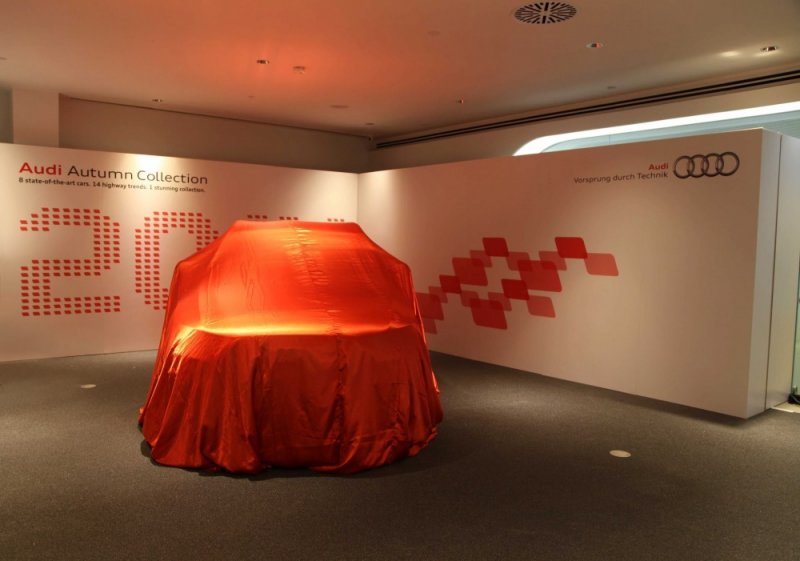 The Audi Q3 S has just been launched and so has Audi’s brand new showroom, Audi Delhi Central. The Q3 S is the cut-price, locally assembled Q3 that would compete in terms of price with the Mercedes A and B Class and the upcoming BMW 1 Series.

For starters, the 2.0-liter TDI diesel engine has been detuned to produce 140bhp and 320Nm of torque, as compared to 177bhp and 380Nm found on the regular Q3. The Q3 S ditches the S-tronic automatic gearbox for a 6-speed manual and the Quattro four-wheel drive system has been replaced by a front wheel drive layout. These changes, while bringing down the price of the car, also reduce its weight a bit.

As far as the features are concerned, the Q3 S loses out on the panoramic sunroof and the Audi daytime running lights. The Xenon lights have also been removed from the features list and you instead get conventional halogen bulbs only.

Audi India is offering a complimentary “Off-road Style Package” for the first 10 online bookings. The price of the Q3 S is given below:

They have clocked 125 bookings so far & counting

People who have had bad experiences with auto or DSG gearboxes seem to be preferring this car for its badge alone.
I guess thew le
lauched a special red colour for this variant which was not seen in Audi except for the previous A4 & on A5
V 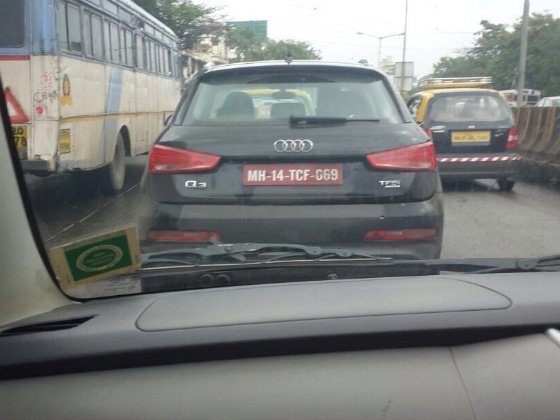 Audi India will soon launch a new petrol variant to the Q3 family. The Audi Q3S, currently available only with a petrol engine and a manual gearbox mated to a front wheel drive setup will soon be joined by a new TFSI petrol engine with an all wheel drive system. Whether Audi India will continue to offer the manual gearbox as with the Q3S diesel or mate it with the existing 7-speed S-Tronic gearbox is still unknown.
The biggest difference between the standard petrol version and the Q3S version is the lack of the LED daytime running lights and the LED tail lamps. The Q3S TFSI will also come will smaller 16-inch wheels as part of the standard equipment as compared to the larger 17-inch wheels available on the standard car. That said, we do expect Audi to keep the exclusive red paint shade on the petrol version of the Q3S too to attract a younger target audience. The Q3S will also get a sporty twin tip exhaust finished in black as compared to the chrome exhaust tips that one gets in the higher spec’ed version.
A 2.0-litre, 4-cylinder, turbocharged petrol engine making 210PS of peak power at 5000rpm and 300Nm of maximum torque at 1800rpm will power the Audi Q3S TFSI.

Manual Version for the Q3 SUV has been launched by Audi. The manual version is Rs. 3 Lakh cheaper than the automatic version.

The manual transmission Q3, which costs Rs 3 lakh less than the automatic version, is part of the German carmaker's strategy to counter the new generation compact cars from rivals Mercedes Benz and BMW.

Such is the public response to it that 18 months since its launch, the manual transmission Q3 still has a waiting period Audi has already exhausted the allocated units for this year, people aware of the matter said. The face-lifted version of Q3 is slated to hit the market later this year.
Click to expand...
link

Wasn't the manual version dubbed as Audi Q3S was launched sometime back with Cheaper price-tag, lower equipment ? As far as i know, it was discontinued due to poor sales compared to the Automatic version.
V 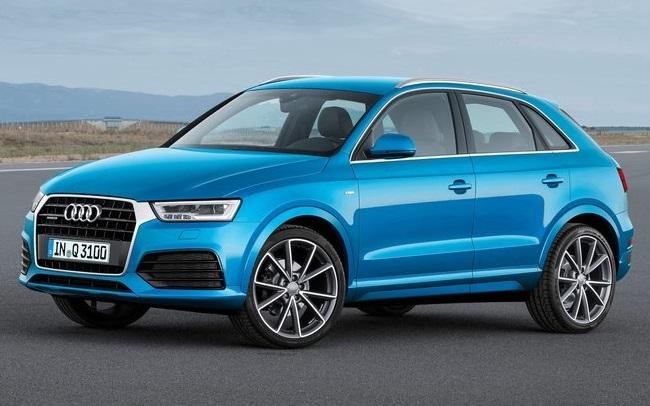 Cosmetic tweaks and equipment additions to be part of the refresh.

Audi will launch the updated Q3 in India on June 18. The changes are predominantly cosmetic. The front gets a restyled grille with a wider chrome surround, larger air intakes, and there could be LED headlamps available as an option. The taillights are new, as are the alloys wheels.

On the inside, the changes are very subtle, and include a new steering wheel, instrumentation and an updated MMI system