Click to expand...
That's wonderful, When they price there car competitively cant they foresee the demand and get more number's of car's to assemble, why does everyone want's to play safe in our market?

Here’s the official music video of Audi Q3. Check Out.

The bookings are available. Booking amount is Rs. 10L but the on road price is coming to about Rs.46 L !!

I thought this must not be the case and hence called Audi Mumbai West and got the same reply. For 46L, Q3 is not worth at all.

Is that for the top end model? even though if that's the case it surely is expensive and I don't see any value in paying 50 Big one's for Q3.

visran said:
Is that for the top end model? even though if that's the case it surely is expensive and I don't see any value in paying 50 Big one's for Q3.
Click to expand...
Correct. Even the senior fellow (read brother of owner of showroom) said that it is not worth this price. Better spend couple of lakhs more & get Q5.

For 46L, Q3 has no remote chance of fighting against BMW X1. BMW guys must be partying this weekend.

Audi Q3 sold out in India; Bookings reopen next month.

And it has finally happened. Audi India, which allocated 500 units of Q3 for India, has managed to sell them all. The Ingolstadt giant launched the Audi Q3 in India on June 6th at an entry price of 26.21 lakhs.

Within 7 days, the company has managed sell out the Q3 in the Indian market.
The allocation of 500 units was used because of the manufacturing constraint in the European plant. The automaker has confirmed that the next batch of 500 units will be available in July. This fresh batch would reach stockyards by August.

It seems like the consistent big growth has emboldened Volkswagen group owned German luxury car brand Audi, for the car maker hopes to displace current market leader BMW India by 2014, a year ahead of schedule. Previously, Audi aimed to emerge as the top luxury car brand in India by 2015. However, the recent success that the brand has been seeing in India has prompted the automaker to revise forecasts. Audi India recently moved past Mercedes Benz to emerge as the second largest luxury car maker in the Indian market despite being the youngest of the German trio to begin doing business in India.

Its been quite interesting to see the way Audi has grown over the past few years. The company which used to bet on completely built units shifted tack and begun assembling many of its best selling cars through the completely knocked down(CKD) route. This resulted in prices of its cars decreasing sharply as CKD cars attract just a fraction of the duties imposed on CBUs, leading to sales increasing. Also, Audi began focusing on the the luxury SUV market with the Q5 and Q7 range of luxury crossovers, which are the top sellers in the high end luxury SUV segment in India.

This gave Audi a headstart over rivals like BMW and Mercedes Benz, eventually leading to Audi moving past Mercedes Benz last year. Another approach Audi has been taking in India is the use of celebrities to promote its products. From launch events which feature movie stars like Kartina Kaif, Lisa Ray and Gul Panag, Audi has been actively conducting many events with celebrities gracing many a show, leading to the brand having a bigger buzz than its competitors who say that they prefer their cars to be the center of attraction( and rightly so?).

However, this strategy has allowed Audi to be in the public eye despite being a relatively late entrant into India. Also, the brand has been very active on social media networks. For instance, the brand conducted a Facebook poll of sorts in which it allowed its fans to tag themselves on an image of the Audi S4, with the large number of tags leading Audi to launch the high performance variant in India. The other big move recently has been that of making a distinctly Indian music video centered around the just-launched Audi Q3, featuring Bollywood actor John Abraham. All in all, Audi is going all out to become the top luxury brand in India and by the looks of it, the automaker could get there in quite a hurry.

visran said:
Audi Q3 sold out in India; Bookings reopen next month.
Click to expand...
visran said:
AUDI CONFIDENT OF DISPLACING BMW AS INDIA’S TOP LUXURY BRAND BY 2014
Click to expand...
Audi (And its parent company Volkswagen) surely have a good sense of marketing. That’s one of the biggest reasons why these manufacturers have settled in India in a very short span of existence. Now the scenario is that they have become a potential threat for some of the already well-established players in our country.

350Z said:
Audi (And its parent company Volkswagen) surely have a good sense of marketing. That’s one of the biggest reasons why these manufacturers have settled in India in a very short span of existence. Now the scenario is that they have become a potential threat for some of the already well-established players in our country.

Drive Safe,
350Z
Click to expand...
Rightly pointed out, Companies like Mercedes who entered India more than a decade ago was made to smell the dust by BMW, and it wont be long before BMW is left behind by Audi.

visran said:
Rightly pointed out, Companies like Mercedes who entered India more than a decade ago was made to smell the dust by BMW, and it wont be long before BMW is left behind by Audi.
Click to expand...
BMW outsold Merc due to X1, which is nothing but bigger alto with BMW badge. Audi can overtake BMW by launching cheaper products.

Fact is one needs to see sales in same category -

And I feel Audi to be better than BMW in general but in terms of respect of brand, Merc > BMW > Audi.

Audi has launched a new engine option for the Q3.

The smallest Q now comes with the option of a 2.0-litre TFSI engine. The four cylinder petrol motor makes 208.1bhp and 30.6kgm and comes mated to the same seven-speed automatic gearbox as in the diesel car.

It propels the Q3 TFSI from 0-100kph in a claimed 6.9 seconds and to a top speed of 230kph. The carmaker also claims the motor is more fuel efficient and sips 11.7kpl. The petrol Q3 is on sale at all Audi showrooms across the country with prices starting at Rs 27.37 lakh.

500 bookings within just five days of launch in June last year was indeed a very warm welcome for Audi’s Q3 diesel model, which till date has been well accepted in the market and more importantly has attracted younger customers to a more affordable compact luxury SUV segment.

With the addition of a petrol model, Audi now offers Q3 buyers a chance to pick from a cheaper yet more powerful 2.0 TFSI model or the more efficient 2.0 TDI diesel version. The Audi Q3 2.0 TFSI model packs in a neat 211PS and reaches a maximum torque of 300Nm between 1,800 and 4,900 rpm. Just like the diesel model, the new petrol version will also offer Audi’s ‘quattro’ permanent all-wheel-drive system as standard.

In combination with a seven-speed S-tronic gearbox, the four-cylinder petrol unit accelerates the Audi Q3 2.0 TFSI from 0 to 100 km/h in 6.9 seconds with a top speed of 230 km/h. Despite its performance gains over the diesel model, the start-stop system on the 2.0 TFSI model does improve efficiency, and at 11.72 kmpl it is very close if not identical to the TDI version.

Speaking at the launch of the Audi Q3 TFSI Michael Perschke, Head, Audi India said, “I am confident that the addition of this powerful 2.0 TFSI engine will further delight the Audi enthusiast who is constantly looking for more power and an even more exhilarating drive.”

The new Audi Q3 2.0 TFSI is priced Rs 27.37 lakh (ex-showroom Maharashtra) onwards, and for easier access to its Indian customers, Audi plans to expand its network to 34 dealerships by the end of 2013 from its existing 25 centres.

Incidentally, Audi’s proprietary 2.0 TFSI engine has been voted the ‘International Engine of the Year’ in its category for 5 consecutive years, by a jury of leading motoring journalists from around the world.

Spied: Is it a locally assembled entry level Audi Q3?

Now comes Audi Q3 In India which is assembled here in India. 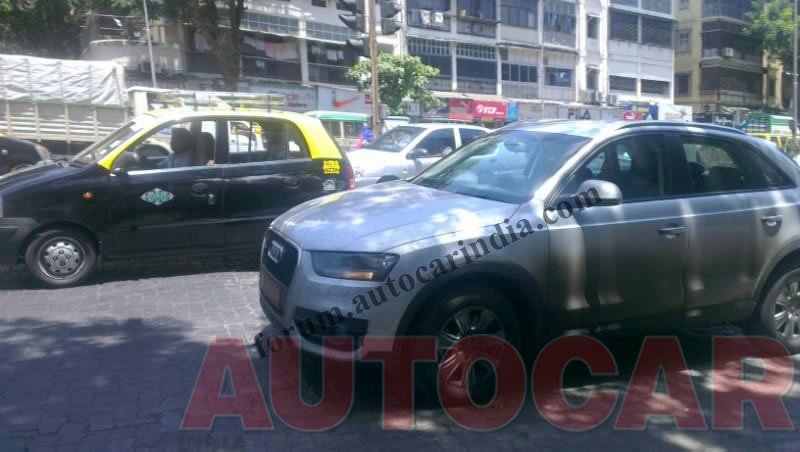 ^^ that's actually a bigger yeti with Audi logo, without sunroof (Yeti has sunroof on some verient, no??) , quantoo tech, (FWD) and other goodies also, This is actually to believe the customer getting a "Audi" without being being really it.
on a sidenote, Audi -- seriously, Are you goona sell with this wheel? Please,Look that santro taxi behind, Does much difference is there?

Locally produced Audi Q3 could start from 25 Lakhs, A3 Sportback could be considered

Audi Q3 and A4 locally produced may cost 25 Lakhs.

We reported earlier on the Audi Q3‘s local production which is set to take place in the end of July. Audi India would start assembling the small SUV at their Aurangabad facility and we were told there would be one petrol and two diesel versions.   Audi could most likely have an entry diesel variant sans the Quattro four-wheel drive technology and thus reach out to a larger audience. In a recent interview with DNA, Mr. Michael Perschke, Head of Audi India, spoke about the ideal pricing for the entry level Q3.
Today we start at Rs 27.7 lakh. But if we could bring that to around the `25 lakh, I draw in those who intend to buy a Rs 20-22 lakh car — hatch or sedan, cars like the (Chevy) Captiva, (Honda) CRV, (Renault) Koleos, (Mitsubishi) Outlander. That would mean someone considering spending Rs 18-19 lakh has an EMI in mind. For a fraction more of the EMI, he can buy a proper Audi.
As regular Indian Autos Blog readers may know, Audi in India would rather consider a sedan or SUV rather than a luxury hatchback. Which is another reason why the Audi A3 Sedan (which was only recently unveiled) could find it’s way into India sometime in 2014. However, Mr. Perschke says that the Audi A3 Sportsback could be considered after the A3 Sedan but “more as a niche than a volume product”.