It is good to see many players in HCV segment , otherwise this segment was ruled by tatas and leylands for long time . With Indian roads (especially highways ) getting better we can see the transformation in HCVs too, with bigger , higher powered, more sophisticated, better performance, and ofcourse more expensive too. Hope the atittude of the truck drivers change when driving these monsters

jawa said:
please let me know if anyone has seen the trucks and buses of URAL make in their area.
Click to expand...
I have seen some photographs from net & i hope they had inverted rear axles.
Adding some snaps would be helpful.

Mr.Boss said:
BTW you must have seen the LCV from AMW in Auto Expo, rite? 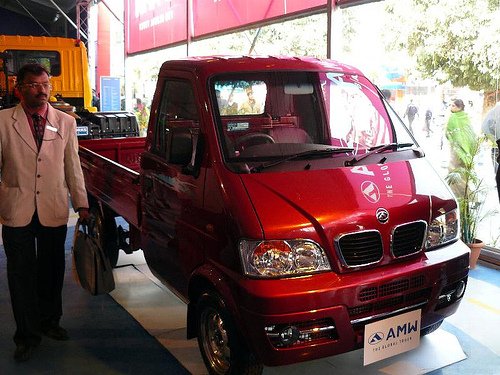 I have visited the factory Asia Motor Works Ltd (AMWASIA). As i am from the same location where this giant builds from the scratch. Factory area is approx 1100 acers. When i have visited the plant around 1200 trucks ready standing in parking lot and consignment was moving to South Africa ( as per official person ).

mitulpomal said:
When i have visited the plant around 1200 trucks ready standing in parking lot and consignment was moving to South Africa ( as per official person ).
Click to expand...
I doubt on the figure 1200. Even if the stock was 1200, not all were made for export, may be a few.
AMW has customers in Nepal & Bangladesh too.

350Z said:
Are you referring to this?
Click to expand...
Yes. Here is the interior snap of 'PUG'

Here is a snap of URAL Tipper (Source : URAL Website)
I doubt the cab was imported from China. Someone pls throw some light on this.

Mr.Boss said:
Here is a snap of URAL Tipper (Source : URAL Website)
I doubt the cab was imported from China. Someone pls throw some light on this.
Click to expand...
Mr. Boss, during my visit to their factory they were only manufacturing, rather assembling the components there which was shipped in from Russia, cab included (as explained by the plant GM). They did not have the automated assembly, and most of the assembly was manual, however they have a nice big area where they were planning to put separate assembly lines for trucks & also shop was being constructed where they planned to assemble the bus body. Back then they were only assembling the 6X6 dump truck and a prototype of the tractor was assembled only a few days prior to my visit. Wait till Monday, the pics would be uploaded.

jawa said:
shipped in from Russia, cab included (as explained by the plant GM)
Click to expand...
Here is the snap of FAW cabins from China. Hope the same is used by URAL trucks.

Attaching the pictures of the trucks during assembly at the URAL factory in Haldia, West Bengal, the Yellow dump trucks are the 6X6, heavy duty ones, the Red one is as you can make out a fire tender based on the same 6X6 platform, while the Blue one is LHD 8X4 from Russia, which was assembled at the factory itself. Work is on to automate the assembly process.

Wow!
The real monsters. Thanks for the pictures Jawa. Are these trucks common atleast in Kolkata? Never seen them in south. I hope they are engaged only in deep mining applications.
J

You're welcome Boss, indeed these are monsters, i have seen these trucks at Salt Lake city in Kolkata, its the new part of the city, where new buildings and business centers are coming up, these trucks are used there in transporting the earth which is excavated to make the land flat or for the foundation, however I have not seen them being used in the mining sector, since i belong to Dhanbad, (coal capital of India)

Sorry mate, I don't have the pictures of the interiors, let's see if I do visit their factory again, I'll definitely get some, I was actually there for official purpose, when I took the pictures posted earlier.
You must log in or register to reply here.