Scoop: 2014 Mercedes-Benz S-Class Filmed in Spain by a Bicyclist 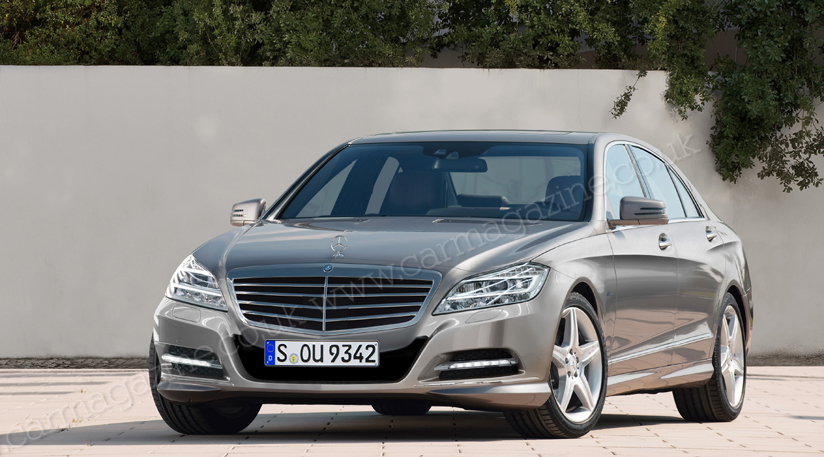 The new Mercedes Benz S-Class is most likely going to be revealed next year, a tribute to German engineering and build quality. But the soon-to-be-outgoing model is still going strong, winning an award in he UK.

Professional Driver magazine has named it the best Chauffeur Car of the Year 2012 for its compliant ride, the reliability and of course the prestige that comes with the three-pointed star logo.

“The S-Class received consistent scoring from all the judges who tested it, and it’s a testament to its quality that a car toward the end of its product lifecycle can still outscore some newer rivals to win our Chauffeur Car of the Year category for 2012,” said Mark Bursa, editor of Professional Driver and chairman of the judging panel.

“Good customer support has also played a major part. Mercedes-Benz made major improvements to its chauffeur programme this year, with the S-Class now matching its competitors pound-for-pound, so it boils down to taste. And the three-pointed star still carries a lot of kudos in the chauffeur industry,” he added.

“We are honoured to receive this award. The S-Class has always been the industry trailblazer when it comes to safety, comfort and driver assistance technologies, and this award cements its reputation,” Nick Andrews, Head of Fleet at Mercedes-Benz UK.

The new Mercedes Benz S-Class won’t be ready to be revealed until 2013 at least, when it might be shown in China due to the importance of the local luxury market. The car will be a technological showcase, fitted with all the latest systems for comfort, safety and entertainment.

It’s believed the W222 generation will come with scanners to detect road imperfections, which will immediately update the suspension settings in order to keep the ride soft yet composed.

But the S-Class is also about the presence, the aesthetics and opulence that come with the owning the biggest Merc on the road. The shape of the new saloon has been teased today with photos of an exciting sculpture titled "Aesthetics S" along with a projection display to be shown at its Paris Motor Show stand at the end of September.

"The sculpture highlights the artistic aspects of design. With the design and proportions of "Aesthetics S", we are communicating a modern sense of status, sensual shapes and stylish sportiness," explains Gorden Wagener, Head of Design at Mercedes-Benz Cars.

"The characteristic lines of the S-Class have always represented the expression of automotive culture, as we understand it. The new S-Class will continue this tradition and, with its striking lines, will put a face to our design philosophy over the coming years,” said Wagner.

Some spy interior pics, taken while car was under test. This will not be final interiors though, as it will be far more better finished & superior than this with multiple colour options.

Radar-scanning variable cruise control, double-glazing, laminated glass, cooled seats - most of the toys you get on today's ordinary saloons debuted on the S-Class about ten years ago. A tech briefing of the new stuff that'll appear MB's next flagship, then, serves as an extremely useful glimpse into the future, not just for the new model but for the broader automotive landscape. Which is why TopGear.com tumbled into Germany to get a special debut of the features that'll be fitted to the 2013 car. And Gott im Himmel, they're clever.

Using 26 sensors (seven more than the last model), three-dimensional vision systems, three ECUs and information and technology from industries as varied as the military and health care, it'll read street signs, leave a little box of darkness for the car in front so you can keep your full beams on, provide extra braking when you crash - hell, it'll even drive for you...

Yep, it'll actually drive itself. Well, for up to 15 seconds, but that's still pretty impressive. Like the old Distronic system, you can set the cruise control to a certain speed and, using radar, it'll slow down if the car in front does. Now it's got Steering Assist, which effectively follows the car in front wholesale, using it as a means of orientation even when there aren't any clear lane markings.

Jochen Haab, Mercedes-Benz's Manager of Technical Support, told TopGear.com: "We have all the sensors for autonomous driving already, but we have to allow the driver to drive. This system is only for when you want someone else to take control. The realistic use case has always been highways."

As well as what's ostensibly semi-autonomous driving, there's a new and improved version of Active Lane Keeping Assist that intervenes when you cross a broken line in the road and the neighbouring lane isn't clear. Providing you're going between 60kph and 200kph (they're the current operational parameters) it'll pull you back into the right lane with single-sided braking. Nifty.

Another futureland update is the full-beam system. It's called Adaptive Highbeam Assist Plus and it lets you keep the high beams on permanently. If the camera-based system registers a vehicle ahead, it adapts the light distribution, leaving a hole of darkness so you don't glare the person in front. If it sees someone driving towards you, or a reflective road sign, it courteously dips the beam. Incidentally, there's not a single light bulb fitted - it's all LED.

On its bottom, the new S-Class has brake lights and indicators that illuminate at varying intensities depending on the amount of cars around and the ambient brightness levels. So, if you're stuck in a traffic jam with the brakes on, the brightness of the lights dims to avoid dazzling anyone behind.

Other safety innovations are pretty dull, but incredibly worthy. Mercedes worked with Tübingen University in Stuttgart - a leading medical institute - to develop the airbag seatbelt, which inflates to three times its size, spreading the load of a crash across the chest more equally. It pre-tenses too, taking out the slop if you bin it.

There's another clever touch with the braking system. After lots of test-drives in the manufacturer's alarmingly large simulator - the most powerful in the industry - MB found that people reacted to emergency situations quickly enough, but didn't apply enough pressure on the pedal. So with the 2013 model, and using the baffling array of sensors, it detects the severity of the braking force required and just... does it all for you. Using the all-new rear radar sensor, it can also firmly apply a stationary vehicle's brakes if you're about to get rear-ended, which prevents secondary accidents.

Our good friends over at GMotors caught the next-generation Mercedes-Benz S-Class testing in Spain. The latest spy photos reveal new details and overall shape thanks to the minimal camouflage. Also appearing on the test vehicle is a new line starting from the headlights, going back to the rear door.

From the interior photos, we can see a new instrument panel with two large LCD screens, one of the screens replaces the regular analog instruments while the other one is a touchscreen display for controlling entertainment, navigation, climate and communication.

As previously reported, engine options will include a wide range of diesel and petrol units. A plug-in hybrid with a 3.0-litre V6 petrol engine and a 60bhp electric motor is also rumoured.

Radar based Distronic PLUS with Steering Assist, which helps the driver to maintain the desired distance in stop and go traffic, steering Wizard, which uses cameras to detect lane markings and vehicles ahead and makes the car drive at slower speeds are a few of the technical features on the new S-Class. There is also Brake Assist PLUS with crossover wizard, which uses camera and radar sensors, helping to prevent rear-end collisions, new Adaptive Highbeam Assist PLUS, Traffic sign assistant, Night View Assist PLUS and new Parking Assistant will park your car automatically, taking over even the brakes.

Theferrarifan said:
Looks like the CL class. Not good.
Click to expand...
Have patience. Ghunghat to uthane de.

No buddy I just dont like the new mercs design language.

2014 mercedes benz s-class luxury saloon: This is it

Old one looked much better to me. That Bclass face and CL like tail lamps don't look that good. Plus the interior has a two spoke wheel now.
Still lets wait for the AMG's.
You must log in or register to reply here.