I have recently received this very useful piece of information, which explains about the latest trick that is being used by car burglars to leave you stranded on road within seconds. Just read-on: 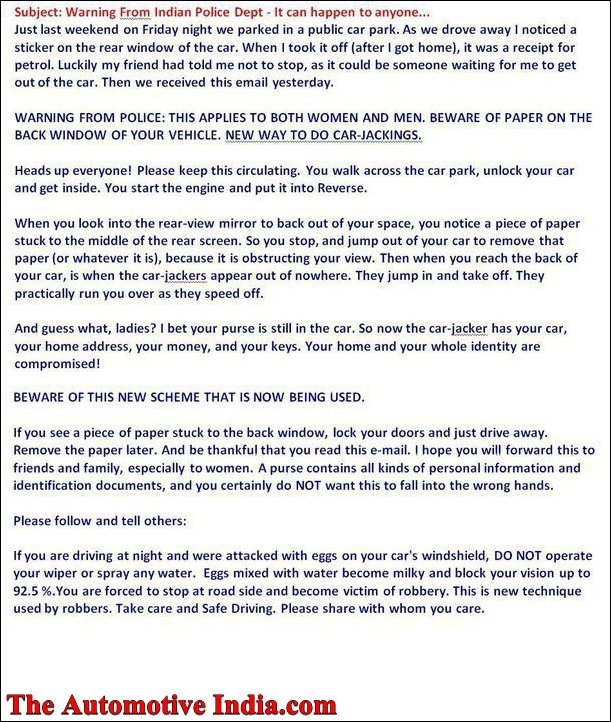 It isn't the latest trick. It is the famous Urban Legends : Sticker-on-Rear-Window Carjacking Scheme
J

have anybody heard about "throwing raw eggs on windshield" by highway muggers!!!

What the%&%&!!! Luckily , i have not encountered anything of this sort till now! Thanks for making us aware of such threats!

Thanks for this information, very useful. I hope i never get to encounter this, sounds scary. lol
A

diabloo said:
It isn't the latest trick. It is the famous Urban Legends : Sticker-on-Rear-Window Carjacking Scheme
Click to expand...
diabloo, I think it is not even an old trick. Looks like this is one of email Hoaxes getting circulated.

These two sites deals with email hoaxes like Bill Gates sharing his fortune and all.

throwing eggs.. had been reported somewhere in goa pune highway and in mumbai also.

Scary , but atleast they go with the car without harming . Ecr is worse in night - once you stop , you are finished.

here they throw small stones on passing cars .
you stop to investigate .

they not only take the car - also the jewels of the ladies and also all mobile etc.


Once such incident of the Scorpio car , living next of my street.
a family of 8 were traveling , same thing happened , they stopped.
the robbers took everything - money, jewels mobile phones etc.
AND dropped everyone at a distance of 10 to 15 kms . so the robbers travel almost 90kms to leave everyone!
The one who protest in the car was wounded with a knife- others unharmed

Click to expand...
the above incident happened in noon!

Imagine the situation when you are left in middle of nowhere area , no phone , no money , nothing !

1) Some one hits/dashes your vehicle in the night when you are travelling alone. you get down to check the issue, you get hit and robbed of your valuables. [This happened last week to amknown person in Perungudi Signal last week]

2) You see a baby lying alone on the roadside at night time. People get down and go near the baby to check it out. Suddenly people emerge from nowhere and attack you.

So people be careful when you are travelling at nights/travelling alone.

I have also heard about robbers throwing stones at 2 wheelers during midnight in secluded spot and when they fall down, they rob you off everything and run away. This also happens with cars too, if you are alone and you get down to check, you are attacked.

It is always better to stay inside your car, especially when you are alone.

It is a basic principal in life I guess. Do not venture out in unknown territory or else you never what will be the out come.

Throwing stones, eggs on wind screen, receipt at the back or hitting your car from behind so that you stop and they can rob you are quite common now a days.

So, forget getting down rather keep driving and reach your destination before you analyze the loss because even if you get down you cannot do anything.

jayadev said:
have anybody heard about "throwing raw eggs on windshield" by highway muggers!!!
Click to expand...
Couple of my friends have faced this when going home on the NH-24 towards ghaziabad.

Just for everybody's sake, if at all you face this eggs thrown on windshield situation, do not, i repeat DO NOT turn on the windshield washer. The water mixes with eggs and creates a dense white/milky solution that covers the entire windscreen and you would be forced to stop the car. Just keep driving till you reach a safe spot and then only clean the glass.

Whoa all these sounds very scary for me! I haven't faced any of them in the night journeys which we do it often.

Thanks everyone for guiding us.

And the egg idea! what creative mind

,could have been better if they had used for any good purpose.

I read a lot in my news papers that even in the city these nabbers who hunts in a pack in their bikes(who knows,even the bike would have been a stolen one) and attacking poor overnight cab drivers,one such incident happened in a residential area of Bangalore that a cabbie who objected giving his valuables to the attackers unfortunately tried to move away and the nabbers who had daggers in their hands managed cut his fingers.

Even in NICE road people who travel in Bikes are more victimized because there are too many bridges which crosses the nice road and the attackers stand in the bridge and throws a medium sized rock into the bikers head which proves fatal and then nabbing them,So people who travel in bikes in Nice road,please avoid it in the night times.

This one i heard it from my Uncle who resides in TN, he tells us that its very unsafe to travel in bike at night times in highways(especially in the single lane roads) That the people driving trucks overtakes the biker and while overtaking them he literally pushes dodge them to the far left which is fatal in almost 90% and them take all valuables,this is done especially in night times.
You must log in or register to reply here.