A 62 Year Old Man To Drive Nano Across India

Thomas Chacko, a Kochi-based, 62-year-old, motoring enthusiast,set out on a 25,000-km, 80-day driving expedition in a Tata Nano 2012. Mr Chacko has mapped this expedition and will not only drive across all state capitals and union territories, but also to India’s farthest reaches such as Kanyakumari in the south, Dwarka in the west, Kargil in the north, and Khardung La, the highest motorable road in the world, the further-most motorable point in the east, Kibithoo, and Nagpur, the geographical centre of India. This drive will be a testimony of endurance of the man and the machine.

Embarking on this journey, Mr Chacko says, “I have chosen the Tata Nano for this journey because it is a car that has put India on the world motoring map. Despite being the lightest car, and having the smallest engine currently in production worldwide, the Nano can take on every kind of road, especially with its clearance of 180mm. I have driven a Tata Nano for almost 900km across cities and towns and also to Munnar, which is 5,000 feet above sea level. I am now convinced that the Tata Nano will go wherever I take it on my trip.”

His whole trip will be sponsored by TATA motor's.

The Tata Nano has proved its robustness and reliability in many rallies and expeditions undertaken by Tata Motors and by customers alone. The company will continue to encourage such expeditions as it will enable customers to further understand and experience the brand. Through this drive, Mr Chacko plans to cover over 25,000km, in 80 days, traversing through diverse terrains and hopes to finish this expedition around July 20, 2012.


All the best to Mr.Thomas Chacko for his expedition.

If you happen to spot him in your city please make sure you walk up to him and ask"What's the secret of your energy?"

Re: 62years old to take NANO across india

His whole trip will be sponsored by TATA motor's.

All the best to Mr.Thomas Chacko for his expedition.

"What's the secret of your energy?"
Click to expand...
congratulations

and All the very for this great adventuresome trip of yours.

Wish MAUTI could sponsor such a trip for me & my ride

Thomas Chacko, a Kochi-based, 63-year old motoring enthusiast, who started his national expedition, in a Tata Nano, from Mumbai on May 3, 2012, successfully completed his 78-day long dream project on July 21, 2012. During the expedition, Mr. Chacko covered 26,500 kms, called on all of India’s state capitals and its union territories and in the process visited over 100 towns and cities in India.

During this expedition, Mr. Chacko drove the Nano to India’s farthest reaches - Tawang in the East, Kanyakumari in the South, Dwarka in the West,Kargil in the North and in Ladhak ascended both Khardung La, which at 18380 ft, is the highest motorable road in the world and Tanglang La, the second highest motorable road in the world. He also went to Nagpur, the geographical center of India and to the mountainous country of Bhutan.

A 63-year-old, Kochi based motoring enthusiast, Mr. Thomas Chacko, is a FCS, from the Institute of Company Secretaries of India. After a successful 20 year career as company secretary and interim chief executive of a major plantation company, he is presently a company secretary in practice.

A motoring buff, Mr. Chacko has participated in several motorsport events. He is also a Formula One car racing aficionado, and has watched races in Sepang in Malaysia, Singapore, and Monaco. He likes traveling and has visited over 27 countries and has also driven cars in Bhutan, Canada, Malaysia, Oman, Singapore, Sri Lanka, the UAE, the UK & the USA.

On concluding his journey, Thomas Chacko said, “The journey was not a joyride but an expedition to explore the country and know the people. The 78-day all India drive has tested the Nano across the some of the most rugged terrains of the country and through all kinds of weather. The car emerged successful in this test of endurance. This journey has indeed been an achievement and a book is very much on the cards. It would perhaps be named Mano et Nano: India to its farthest reaches”, he added.

Some pictures from his Drive:

visran said:
Some pictures from his Drive:
Click to expand...
You’re so quick. Just opened this thread to post these details but as usual it’s already updated by you. Anyways let me upload some bigger pictures. 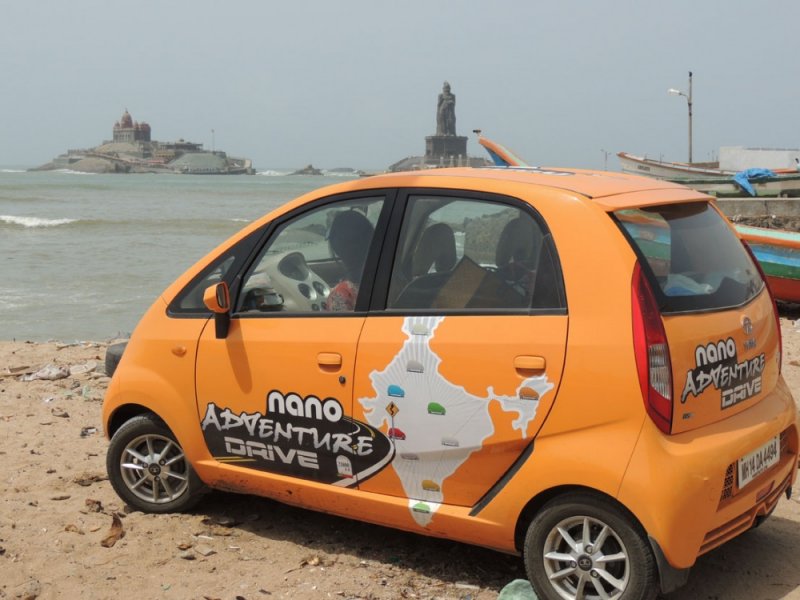 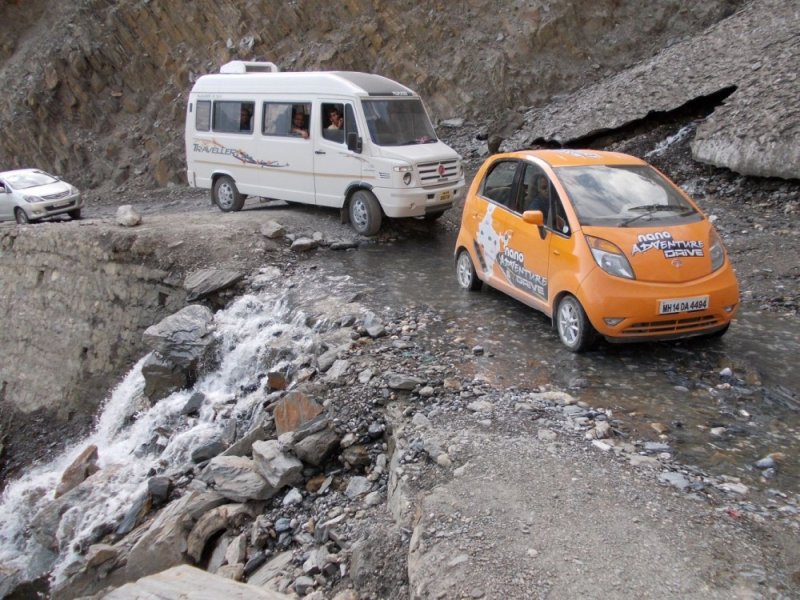 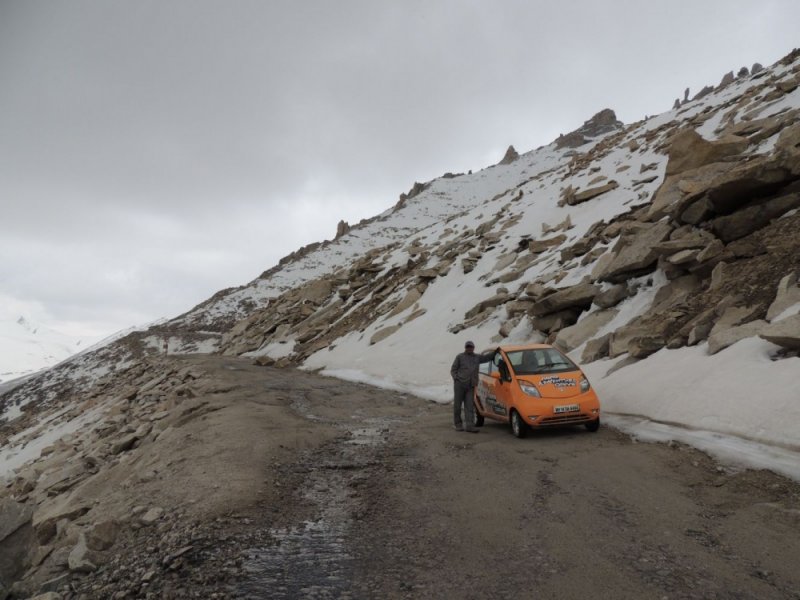 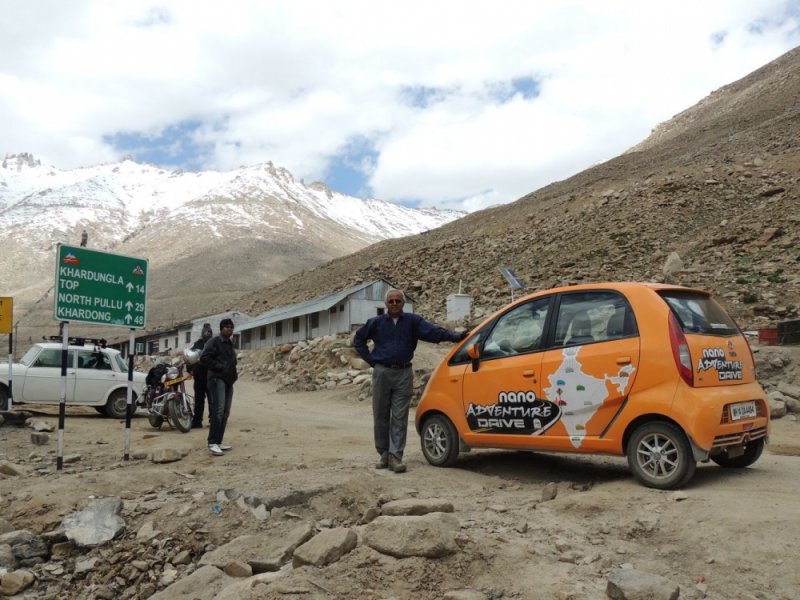 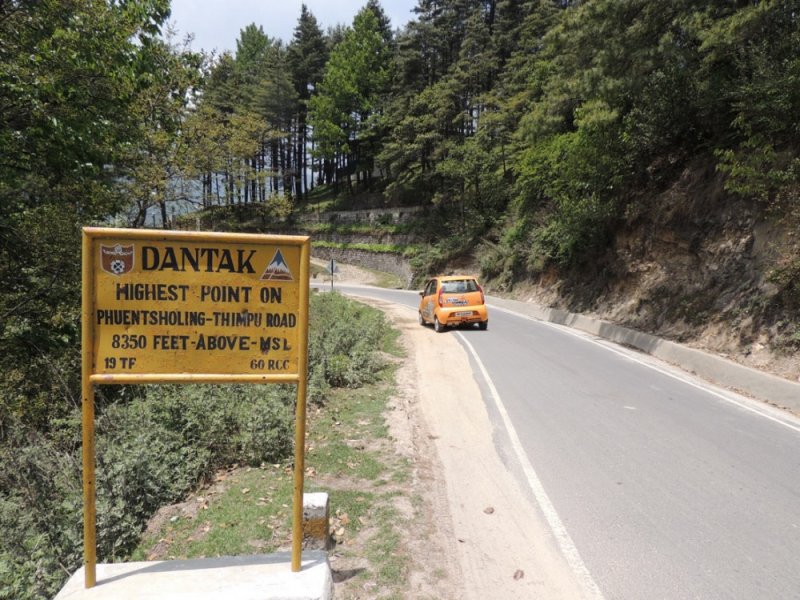 This gentleman has lot of energy and enthu.

Now people with Nano should plan a Leh trip. :P Wish we too have 80 days holiday for such a trip.

A passion has no age barrier , driving is the main thing that drives us most of the time.

It's the driving we enjoy to explore the new places amongst us.

So 62 year must not be depicted, which points out to his age, rather the drive.

Passion to drive is driving him.

mukeshus said:
A passion has no age barrier , driving is the main thing that drives us most of the time.

It's the driving we enjoy to explore the new places amongst us.

So 62 year must not be depicted, which points out to his age, rather the drive.

Passion to drive is driving him.

Click to expand...
+1, and also kudo's to TATA for sponsoring his complete trip, This event proves the robustness of NANO even though being one of the cheapest car's in the world it has the underpinning's to take on one of the worst terrain's in the world

Amazing feat by the diminutive Nano.To cover 26K something kms in one go was a strong testimony to the toughness of both man an machine,Mr. Chako and Tata Nano in this case.

Also thanks Visran and 350Z for posting some very inspiring images.

kudos to mr. chacko for having completed the trip. hope to read his tlog. my impression regarding tato nano has changed. wonder how much servicing was needed for the vehicle while on the run.
You must log in or register to reply here.