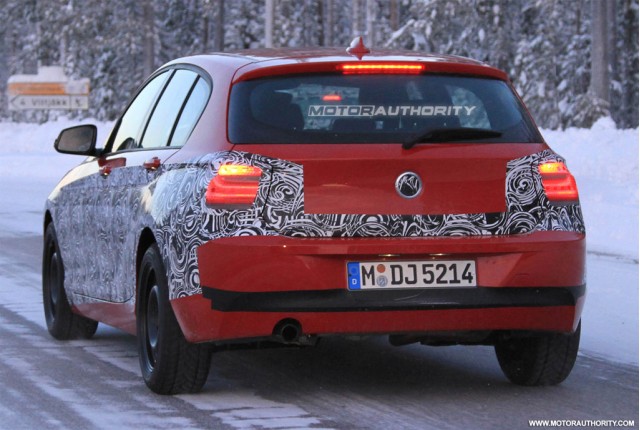 Some quick facts about the BMW 1 Series from Wikipedia.

The 1 Series was launched globally in Autumn 2004 and shares many structural, chassis, powertrain, hardware and electronic elements with the larger 3 Series. The model was started to provide a lower point of entry into the BMW range as the 3 Series moved gradually up-market. Initially launched as a 5-door hatchback, a 2-door coupe version was also launched in July 2007. The 1 Series is priced between the MINI and the current E90 3 Series. Because the hatchback is the only rear wheel drive vehicle in its class, it is often considered the successor to the BMW 2002. The 1 Series line is produced in Leipzig, Germany at BMW's state of the art factory.
The 1 Series coupe (E82) and convertible (E88) went on sale in the United States and Canada in model year 2008 (30 June 2007) as the 128i and the 135i. Other countries received the 120i and 125i in both platforms. The convertible, unlike the 3 Series convertible, uses a soft-top instead of a folding hardtop. This is lighter and preserves more boot space than the folding hardtop would allow.
The North American introduction of the coupe and cabriolet was during the second quarter of 2008, which was credited for helping BMW overtake Lexus as the top luxury brand.
Click to expand...
The tech specs and other details of the current version can be found at BMW Official Webpage.

Will the 1 series launch in India?


I don think it will!

cooldhaya said:
Will the 1 series launch in India?

I don think it will!
Click to expand...
Even i see fewer chances of 1 series debuting in India.
You must log in or register to reply here.