Road Ahead For Volkswagen India

official:Volkswagen has announced the appointment of Arvind Saxena as the managing director of Volkswagen Passenger Cars in India.

Saxena will be based in Mumbai and will head the Volkswagen brand with responsibility for sales, aftersales and marketing. Commenting on his new role, he said: “I am very happy to be part of Volkswagen and look forward to newer and more exciting challenges in one of the country’s most dynamic automotive companies.”

Saxena is an industry veteran with nearly 30 years of experience. Prior to joining Volkswagen, he was director (marketing and sales) at Hyundai Motor India where he served for seven years. Before the Hyundai stint, he had been with Maruti Suzuki.

FOR ME VW IS WORST AUTOMOBILE COMPANY FOR INDIA. THEY ONLY SELL DEFECTED PIECES IN INDIA

The German automotive giant Volkswagen Group has stated that it will invest 100 million euros (over Rs 700 crore) in India in the next two years for upgrading products and facilities, according to the reports. The reports quoted Volkswagen Group Chief Representative, India, John Chacko as saying "We need investments in improving our facilities, doing minor model changes for our exports and other areas. We are investing about 100 million euros for the entire group in the next two years in India."
Chacko stated that "As a group we had planned to invest Rs 2,000 crore, that is on hold since lots of policy decisions are confusing. We are however still putting pressure on Maharashtra government on various policy issues.’’ To woo investors, the state government earlier used to refund VAT paid on all vehicles sold by companies, which have factories in the state. It was modified last year with the state government saying it would refund VAT only on vehicles sold within the state.

Volkswagen To Setup Engine Plant By 2015

Volkswagen AG will build an engine assembly plant in India by 2015, a senior official said on Thursday, as the German automaker looks to boost its lacklustre sales in Asia's third-largest economy.

The company also plans to invest 60 million euros in its India business next year on localisation of components and to boost export potential from the country, said John Chacko, managing director of Volkswagen India.

Volkswagen plans to start exporting vehicles to Taiwan and North Africa from India next year, he said.

Volkswagen, like many other overseas carmakers, has struggled to fully leverage its global clout since entering India, and has failed to win significant market share from long-term incumbents such as Maruti Suzuki and Tata Motors.

Volkswagen to shift India headquarters to Andheri in Mumbai

In one of the largest commercial lease transactions this year, German automobile maker Volkswagen has picked up over 1 lakh sq ft office space in the Andheri suburb of Mumbai to shift its India headquarters from Bandra-Kurla Complex, said two persons familiar with the development.

The lease transaction with tenure of five years with an option to extend it by another five years has been concluded at Rs 130 per sq ft a month.
Click to expand...
Volkswagen to shift India headquarters to Andheri in Mumbai - The Economic Times

The German luxury car maker Volkswagen today performed the ground breaking ceremony for setting up its regional parts distribution centre(RDC) at Bhiwandi (Thane), which is expected to be completed by the first quarter of 2014.

This is the second depot by the Volkswagen group in the country under its 'depot network development project' after Gurgaon, a press release said here.

The ceremony was kicked off with the traditional bhoomi-poojan in the presence of group's Managing director (India sales) Dorizas and Dietmar Hildebrandt, director group service, it said.

"The group has decided to strengthen the current after- sales services by forming the RDC in Bhiwandi and further strengthen the relationship that we share with the domestic customers," managing director, Volkswagen Group Sales India, Gerry Dorizas said.

The centre will cater to western, southern and eastern regions that account for 60-65 percent of the genuine parts sales for the group in the country.

Being strategically located, the centre once completed will significantly contribute to the reduction of the current lead time to provide genuine parts to dealers and service centres, the company said.

Spread over an area of 21,000 square metres, the facility will be equipped with state-of-the-art warehousing software called the ET2000 that has been specially designed for India.

The Centre expects to deliver parts within 24 hours to the Group's dealer network in the western region and 72 hours for in southern region, the company said.

The Polo SR edition will be the second special edition Volkswagen launched in India after the launch of the IPL edition series.

The Polo SR is sort of an accessory add-on at the dealer level. The car will lack changes to the mechanical kit. The motive is clearly to boost the appeal of a a particular trim level by adding novelty. Toyota launched the Aero edition of the Corolla on the low-end J variant a few weeks back that helped create some added excitement.

Going by the equipment on the example that was showcased at APS 2012, the Polo SR comes with the following features -

These additions are on top of features offered on the 2012 Polo which comes with tinted headlights. The starting price of the to-be launched VW Polo SR is revealed to us as 6.14 lakhs (ex-showroom Delhi).

Volkswagen Group to set up 25 training centres in India

Leading German automobile manufacturer Volkswagen Group would set up 25 training centres across the country by 2015, an official of the company said.

"We have 12 training centres across the country at present. We plan to touch 25 such units by 2015," Dietmar Hildebrandt, director, Volkswagen Group, said today.

Announcing launch of the first training centre in eastern India at Dum Dum in collaboration with JIS Group here today, Hildebrandt said the idea behind setting up such training centres was to boost after-sales service of cars produced by the company in India.

The Volkswagen Group, which has brands like Skoda, Audi, Volkswagen and Porshe among others, sold around 1.13 lakh units in 2012.

The company would also expand the dealership network across the country from 230 at present, he said adding the centres would give practical as well as theoretical sessions on mechatronics, after-sales, soft skills and IT.

Volkswagen To Focus On Service, Finally

Volkswagen Group had claimed a mild rise in volumes in India in 2012 compared to the year 2011. The group is currently experiencing slow sales of vehicles in India. In order to achieve significant growth in sales, the Volkswagen Group now plans to focus big on dealer expansion, service and spare parts areas. According to the company, Volkswagen will significantly expand their dealership network and invest big in training for sales and service staff as well as in genuine parts logistics.

In the year 2012, Skoda and Audi brands performed better than Volkswagen brand itself, providing a marginal rise amidst the slow moving auto market in India. Volkswagen’s passenger car division sales declined by 15 percent at 66,873 units in 2012 compared to 78,402 units in 2011, Skoda sales grew by 13 per cent to 34,678 units, Audi claimed 63 percent rise in total sales at 9003 units and the luxury performance brand Porsche in India managed to sell over 200 units in 2012.

While Skoda service has improved in the past few years and Audi service is known to be good, it’s mainly Volkswagen service which has become very poor of late. The experience at dealerships has been nothing short of horrid for a few customers, who left their vehicle for service, trusting Volkswagen’s after sales outlets to take care of their prized possession. Perhaps Volkswagen should start by training their service centres on how to handle a customer’s car.

I m happy that VW is focusing on service.Because,VW owners,like us,will face excellent service with VW.

Volkswagen India Private Limited announced the achievements of the “Think Blue. Factory.” initiatives at its Pune Plant in Chakan which aims at environmental sustainability - a global target set by Volkswagen. The project, which was globally announced in 2011 and implemented in Pune Plant from 2012, focuses on reducing the environmental impact of all Volkswagen plants across the world by 25% by 2018 based on 2010 values. This applies especially to energy consumption, water consumption, waste generation, air-borne emissions including carbon dioxide emissions.

Mahesh Kodumudi, President & Managing Director, Volkswagen India Private Limited, said, “The strategic goal for the Volkswagen Group is the economic and environmental leadership in the global automotive industry by 2018. The ‘Think Blue. Factory.’ initiatives are a key to achieving the goals. With the ‘Think Blue. Factory.’ initiatives we aim to reduce the impact on the environment by 25% by 2018.”

Poor sales have forced Volkswagen India to scale down its targeted market share of 20% to 7 – 8% by 2018. Quoting an excerpt from TOI:

The company said that environment in India is "challenging" and it is a "struggle to find the right product and right cost structures" to make a deep cut. "It is a challenge ... (and) not an easy market," Mahesh Kodumudi, president and managing director of Volkswagen India, told TOI here. Kodumudi said that against the initial expectations, the VW brand failed to get a flying start in India due to heavy competition from cost-effective players like Maruti Suzuki and Hyundai. " Perhaps we made a big splash when we entered and the expectations were that we would come and conquer the market. That has definitely not happened."
Click to expand...
Drive Safe,
350Z
V

Volkswagen to go more local in India to lift sales. Volkswagen will increase the amount of locally-made parts in the cars it sells in India to cut costs and lift falling sales in a competitive market dominated by cheap compacts.

VW may not have had localization in mind when it entered India in 2010, but it is now a key part of its growth strategy, marking a shift in how it plans to boost sales in a market with vast potential.
VW is set to change the game plan. VW will step up sourcing of components from India to cut costs and broaden its appeal. Indianization to make the cars more adapted to the taste of the Indian customers. is the new way of thinking at VW.
VW plans to raise the local content level in cars to 90 percent from about 65-70 percent now by building engines and gearboxes locally. While it has not decided when it would start building these.

VW will look at launching new cars in India in two to three years. He said the automaker needs to be in the compact sports utility vehicle and compact sedan segments to position the brand correctly.
The entry-level car market is very price sensitive...and it is very hard to compete hence company will not seek to compete with hatchbacks like Maruti's Alto, in line with its premium image globally.

Here's a picture of Volkswagen proudly rolling out the 4th lakh car (New Polo) from Pune Plant which commenced its operations back in March 2009. 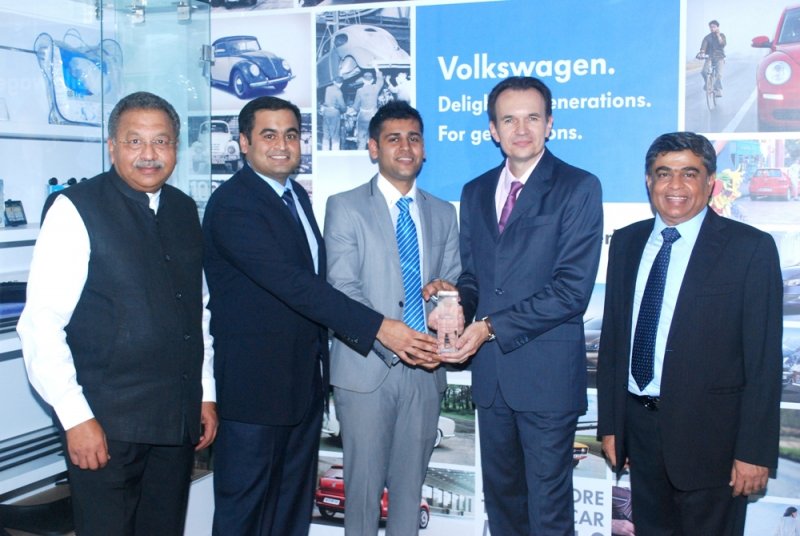 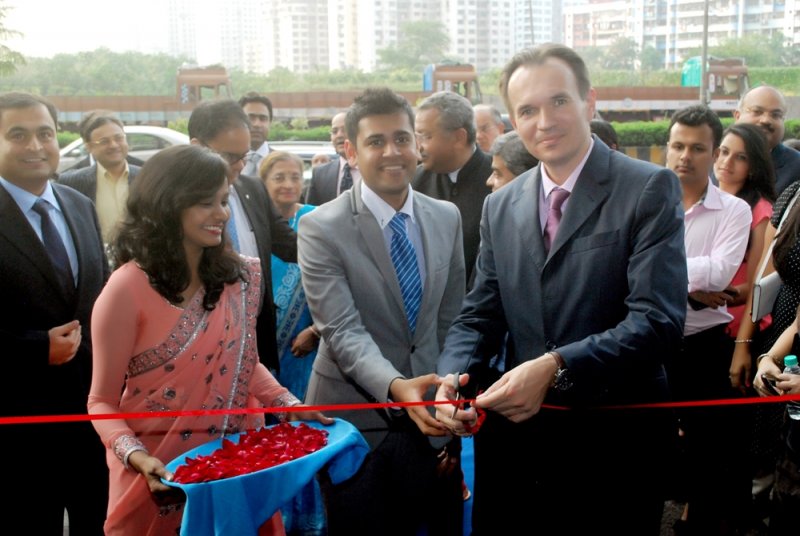