Reckless On Road: 3 in Every 5 Indians Admit Using a Mobile Phone While Driving 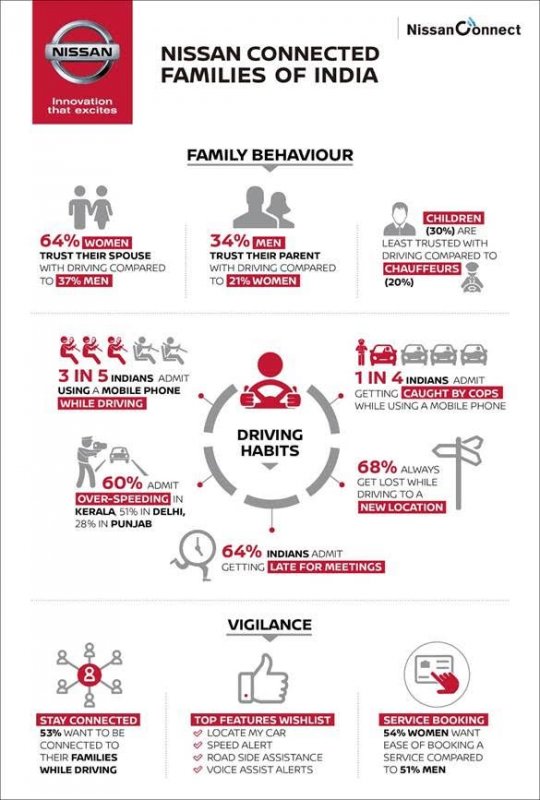 ​
New Delhi, April 6, 2018 – A recent survey has revealed that Indians are posing a serious threat on the road with 3 in every 5 admitting using mobile phones while driving. Of this, North India leads with 62% compared to South with 52%. At the same time, only 1 in 4 Indians have admitted that they have been caught by cops breaking this law. Over-speeding additionally posed another problem as 60% of respondents admitted to over-speeding in Kerala, followed by 51% in Delhi, and 28% in Punjab. Conducted in collaboration with Nissan India and Kantar IMRB, the Nissan Connected Families of India survey deep dives into the day-to-day driving habits of Indians across 20 states, ranging from over-speeding, phone usage, punctuality and vigilance to trust.

When it comes to trust, a large percentage of women respondents (nearly 64%) trust their spouse when it comes to driving, as against just 37% of men who could say the same. Children, however, scored consistently low on the trust score with 30% respondents rating them the least. The survey also identified the increased need for vigilance as respondents (72% in Tamil Nadu, 70% in Kerala, 57% in Punjab and 66% in Delhi NCR), said that they would always want to monitor their children while they are driving.

Jerome Saigot, Managing Director, Nissan Motor India Pvt. Ltd. said, “The findings of the Nissan Connected Families of India survey have not only revealed some startling facts but also raised a need for in-car technology and connectivity for safety of the loved ones. This has been further affirmed by the fact that 53% respondents expressed the desire to be connected to their family even while driving.”

“At Nissan we keep the consumers at the heart of everything we do. As a part of Nissan’s Intelligent Mobility, we have introduced NissanConnect to make the car more responsive. Equipped with 50+ features to ensure safety, security and convenience, NissanConnect is the 1st and only telematics control unit based Connected Car Technology in the industry,” he added.

Apart from trust and vigilance, the survey highlighted interesting patterns in India’s driving habits. About 68% Indians confessed to always getting lost while driving to a new place, often leaving their families worried and anxious. Moreover, nearly 64% of the respondents admitted to getting late for meetings. This trend varied from North to South, as 65% respondents in Kerala conceded to failing in keeping time commitments as opposed to 48% in Punjab.

NissanConnect is industry’s 1st and only telematics control unit based Connected Car Technology with a dedicated server. It provides 50+ features and 3 years of free subscription to its users for a seamless experience. NissanConnect is available with select variants of Micra Active, Micra MC, Sunny & Terrano as a factory fitment. It is also available for old/other variant customers as an accessory fitment through any Nissan dealer at a certain cost. Users can be informed 24x7 on their car movement and various other details. Features like speed alert, geo fencing, curfew alert, locate my car, share car location, eco score and trip planner provides user vital details of the car and also family members using it. To know more, click here

Nissan Motor Co., Ltd. Nissan is a global full-line vehicle manufacturer that sells more than 60 models under the Nissan, INFINITI and Datsun brands. In fiscal year 2016, the company sold 5.63 million vehicles globally, generating revenues of 11.72 trillion yen. In fiscal 2017, the company embarked on Nissan M.O.V.E. to 2022, a six-year plan targeting a 30% increase in annualized revenues to 16.5 trillion yen by the end of fiscal 2022, along with cumulative free cash flow of 2.5 trillion yen. As part of Nissan M.O.V.E. to 2022, the company plans to extend its leadership in electric vehicles, symbolized by the world's best-selling all-electric vehicle in history, the Nissan LEAF. Nissan’s global headquarters in Yokohama, Japan, manages operations in six regions: Asia & Oceania; Africa, the Middle East & India; China; Europe; Latin America; and North America. Nissan has a global workforce of 247,500 and has been partnered with French manufacturer Renault since 1999. In 2016, Nissan acquired a 34% stake in Mitsubishi Motors. Renault-Nissan-Mitsubishi is today the world’s largest automotive partnership, with combined sales of more than 10.6 million vehicles in calendar year 2017.
Click to expand...
Regards