bhvm said:
Do also post a beam shot of LED daymakers. (Low & high)
BTW, paint peel solved on back rest?
Click to expand...
sure, will do. my friend replaced the entire backrest.

by the way finally ordered the SOL Metalman in Red.
K

Here are some pics of the Pumba with the new daymakers, and the beam pics. 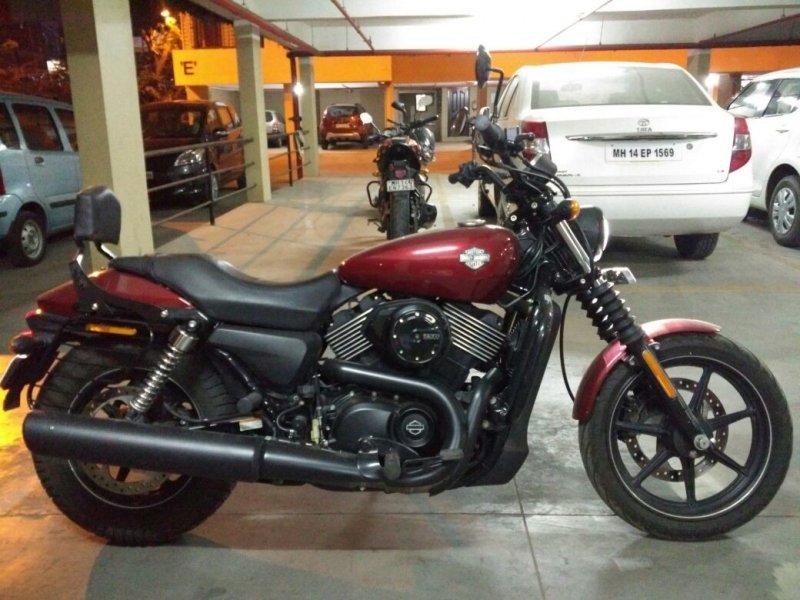 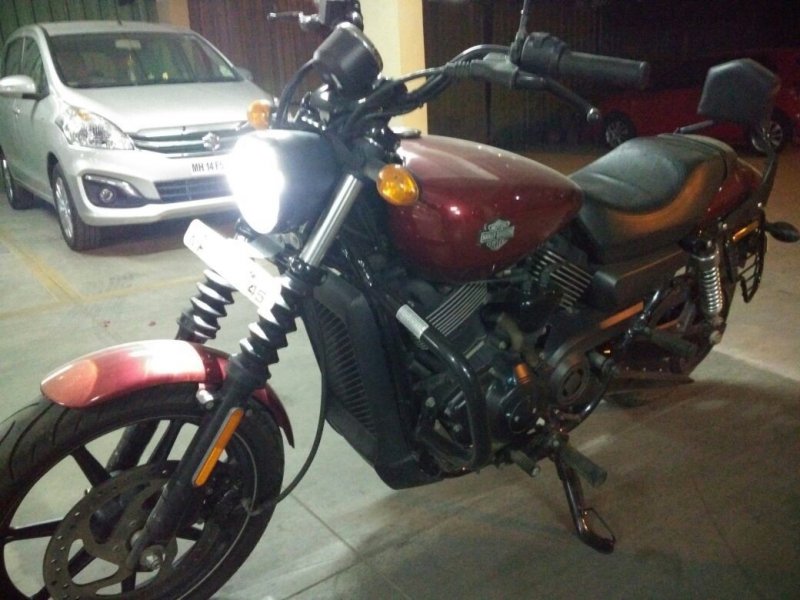 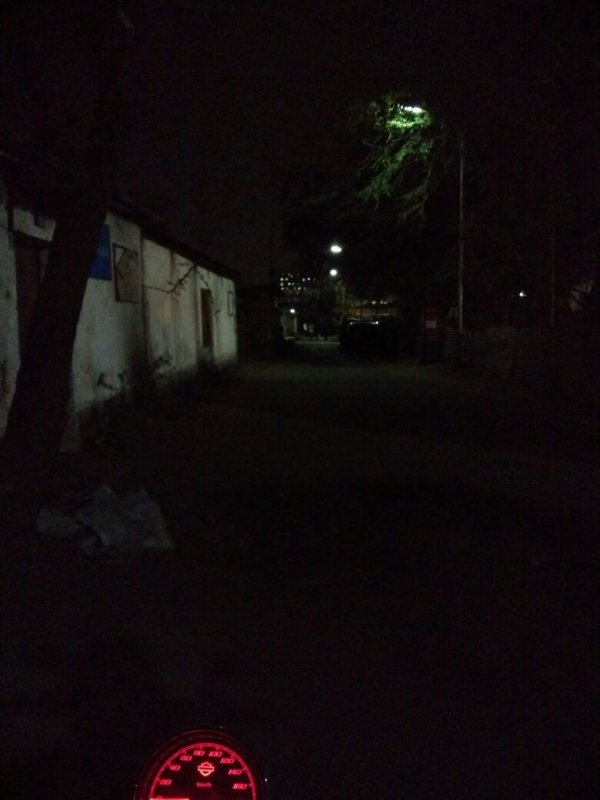 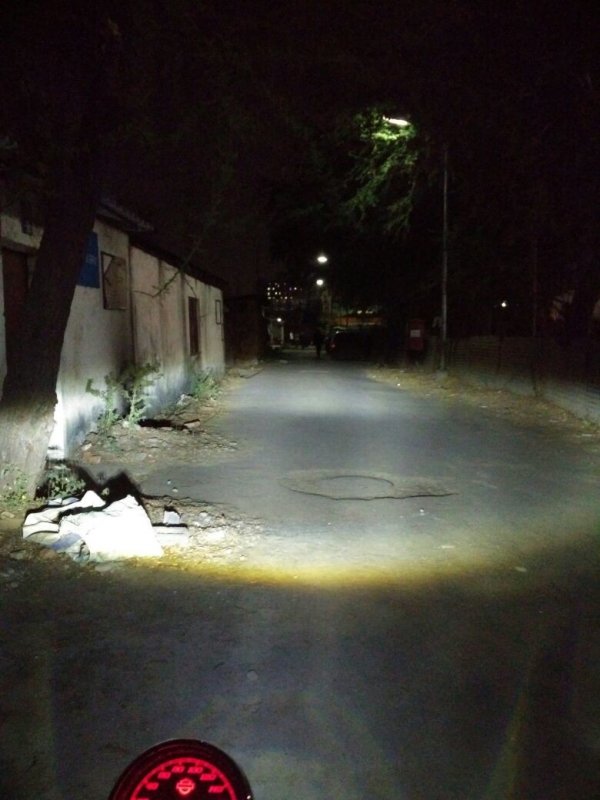 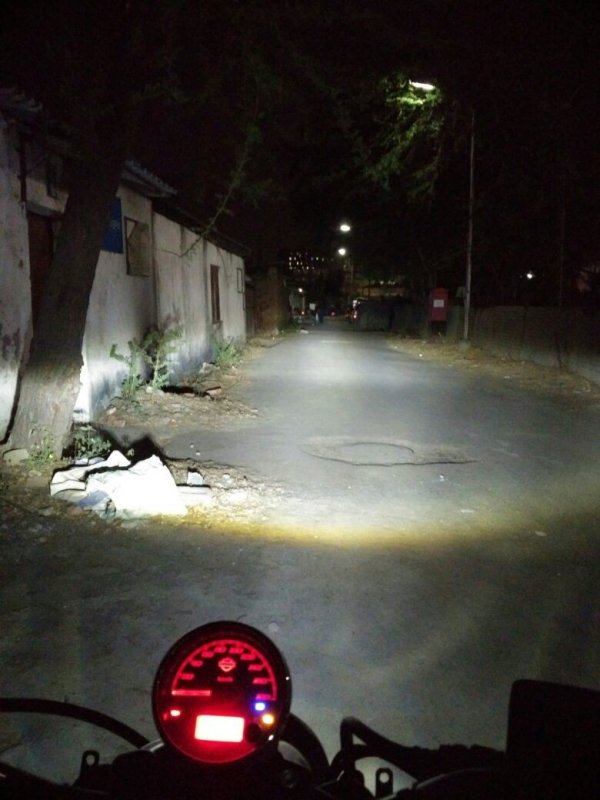 and those lights are awesome. what a visibility, wish you all the best to munch miles on this.
K

incarnation said:
Now the bike looks more like a Harley!!

and those lights are awesome. what a visibility, wish you all the best to munch miles on this.
Click to expand...
Planning for some Tank Raisers to make it look more Harley like. but the current budget has been already spent on SOL Helmet and Service, so the tank raisers need to wait for sometime.
K

Apologies for the interuption in the updates, there was nothing much to update. Pumba has completed 6000km. Low running.

I finally got the tank Raisers from Sandeep Dahiya in Bangalore, got them installed this weekend, there was some fitting issue so had to fabricate another small bracket.

the looks definitely changed, the tank now looks like a crouched predator instead of the initital flatter profile. Have a look.

Also got the front brake pads upgraded to EBC Sintered ones, as the stock ones had worn out at 6200km.

The factory horn also went kaput that was changed free of cost under warranty, the actual price is 3500+ fitting charges and taxes.

Planning for a Motomiu 2x2 full system exhausts and Vance and Hines FP3 in the next year, have made a deal with the wife for it. 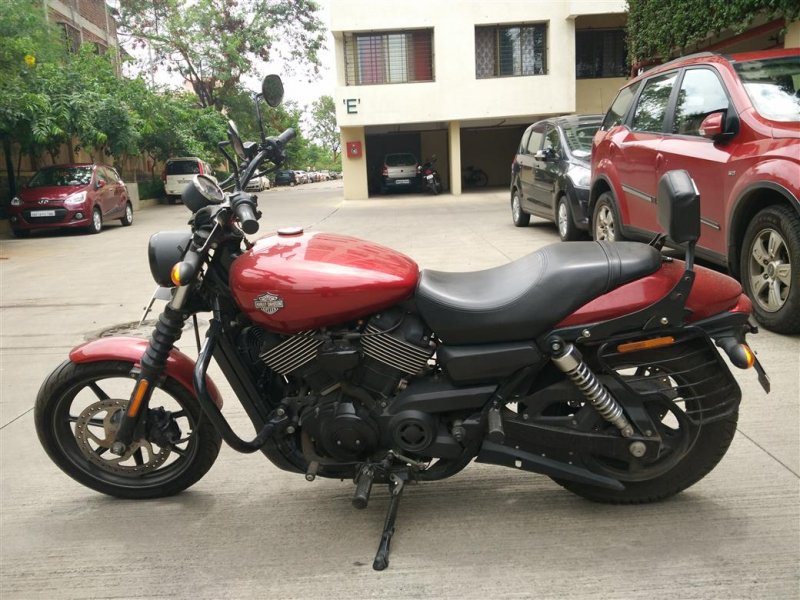 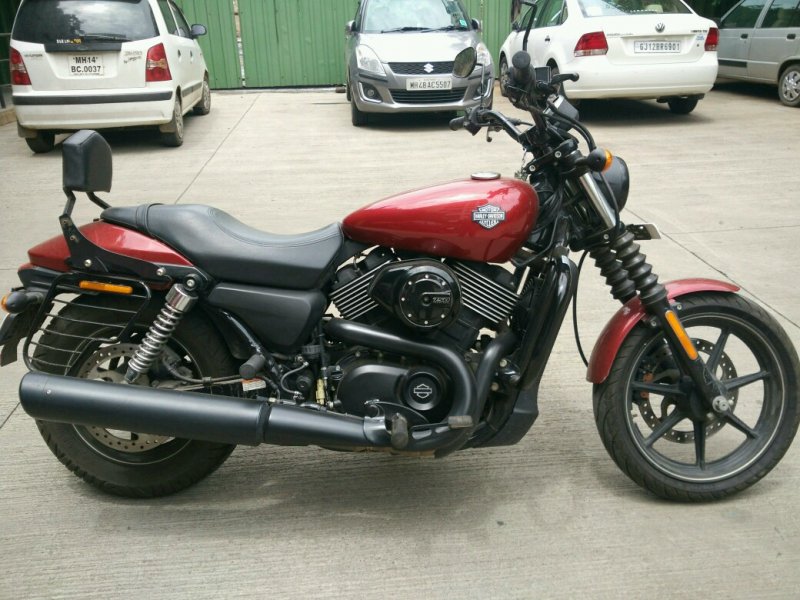 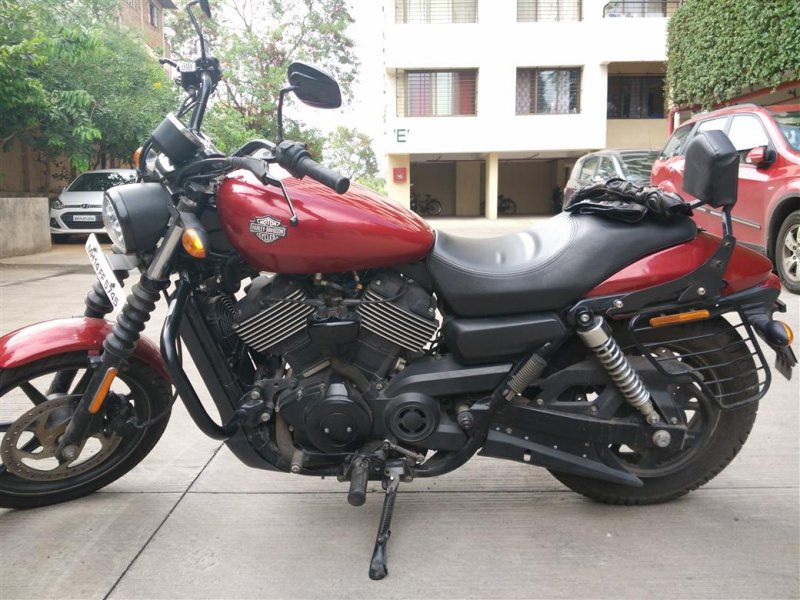 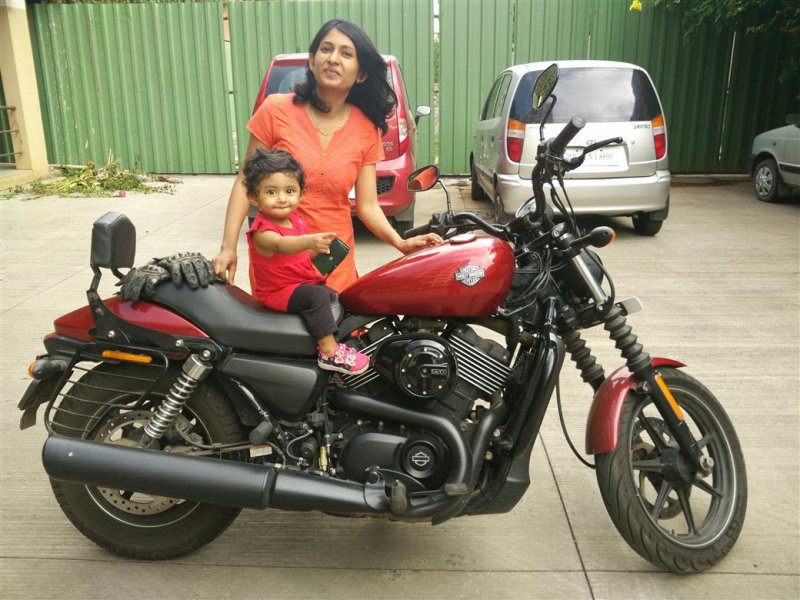 Good updates you plan there.
BTW the bacchi is looking quite cute! She aspires to become an Bike racer I can see in her eyes!
K

Long time no updates.
Frankly nothing to update. pretty low running as long rides have been banned by the Home ministry. So using Harley for my daily commute to office. As I have another bike the running is pretty low.

Till now Harley has completed 7500kms only. I was away for 4 months in between so havent even serviced it since last year.

The running is pretty smooth, no hiccups, no issues. Mileage is coming close to 18-19kmpl. No other mod or upgrade till now.

Oh and yeah it doesnt look as clean as it is in the above pics. I blame the monsoons.

Couple of pics after a quick wash and wax for Diwali pooja. The other one is an Oct 2009 Yamaha FZ16, completing 50000kms. have a look. 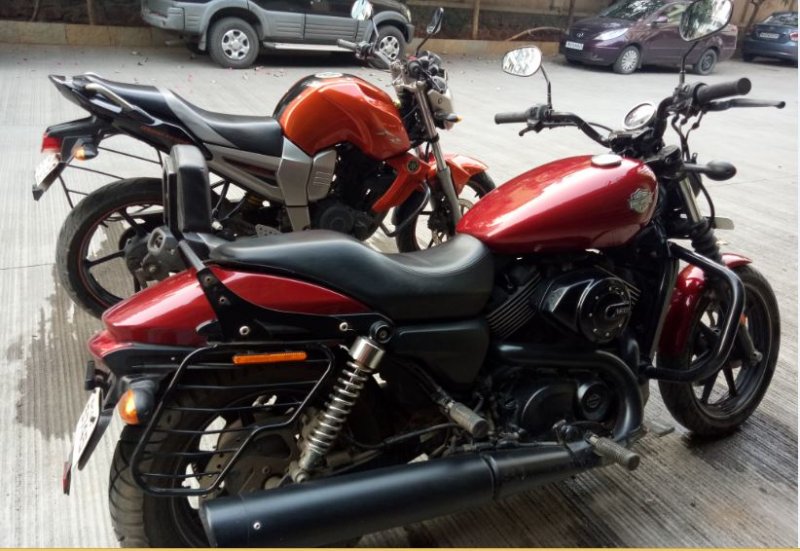 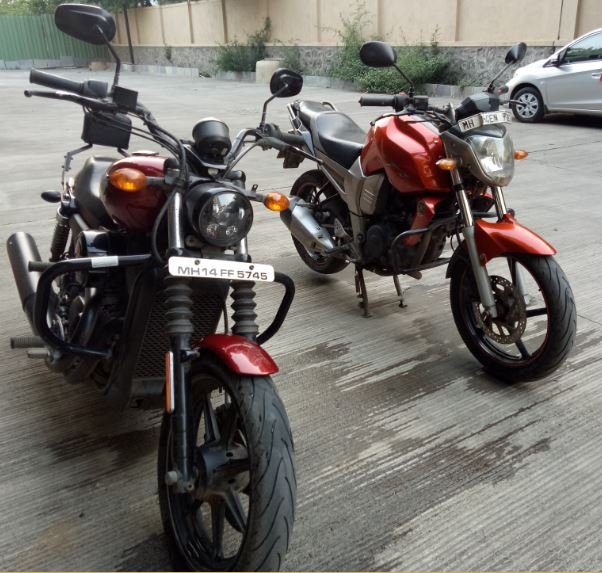 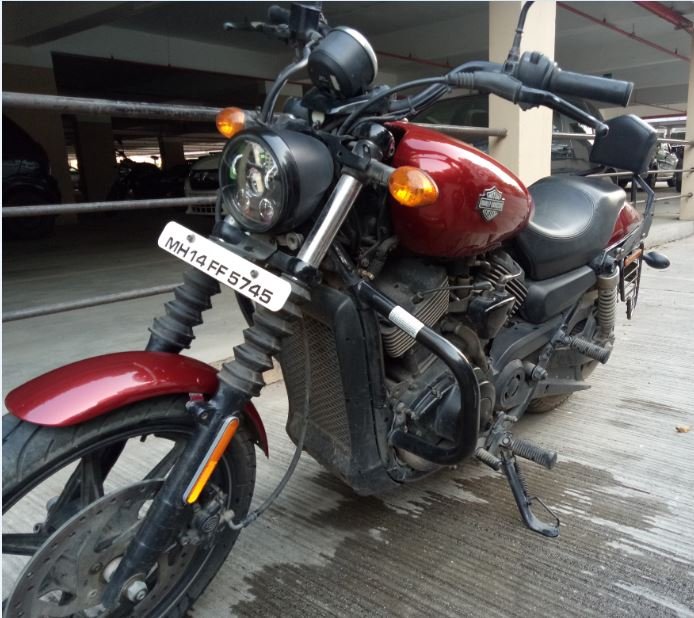 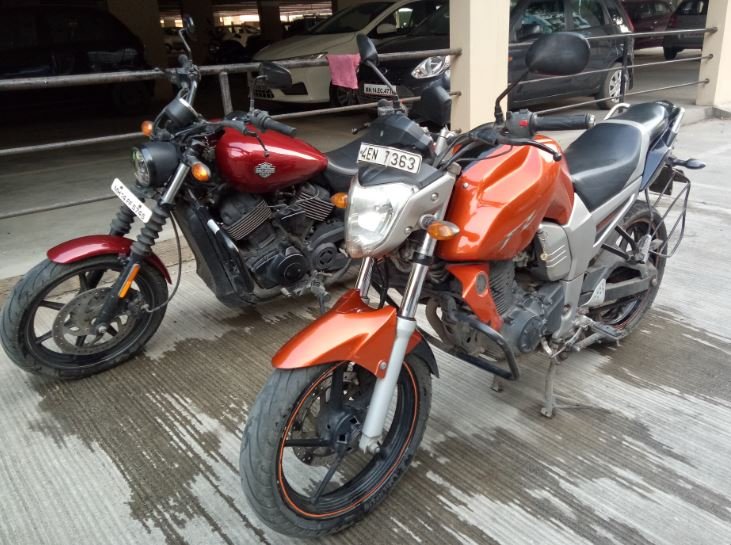 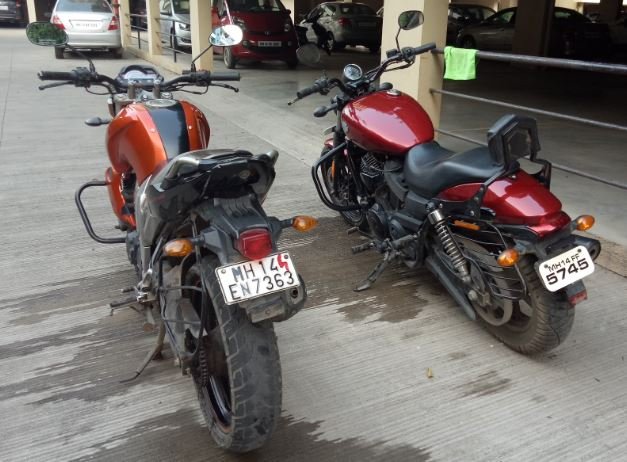 Finally, after a long hiatus of 2 years I went for a long ride. This ride meant a great deal to me, as I wanted to check how I am going to fare and if my better half will still like to go on a long ride after the comfortable long drives in the XUV. The results were quite promising, it were so good that my better half has started thinking about going to Leh on a Motorcycle in the year 2020. I am still not sure if I can cover close to 6500kms on a motorcycle even on one as comfortable as the Street 750. But that is a discussion for another time.

The ride was a regular Breakfast ride for the Harley riders organized by the dealership in Pune, Two Rivers Harley Davidson. This weekend it was till Le Meridien in Mahabaleshwar. The distance between the assembly point @ CCD Ambegaon and the hotel is around a 100 kms. My Home from the assembly point is around 30 kms. So for me the distance was of 130kms one way.

The group met at the assembly point @6:30AM, 20+ motorcycles had assembled over there with close to 25 people as some of us had pillions with them as well. The motorcycles ranged from the tiny Street 750 to the humongous Fatboy and pretty much everything in between, there were a couple of Heritage Classics, a lot of Streets, a few Iron 883s, and some 1200 ones, including the Custom 1200, a Lowrider and a few Roadster. There was also a 2018 Fatbob. Some of the motorcycles were so loud that it became quite irritating to ride alongside them. Later on I observed that they had complete straight pipes and not just slip ons.

Starting from home the weather was slightly chilly but the actual effect of the cold was realized when we started from the assembly point and on to the open highway, living inside the city one fails to realize the actual temperature in the open. On top of the weather being quite chilly the wind chill factor was also made the ride slightly uncomfortable, my hands even though wrapped in leather riding gloves started to get number 20-25 minutes in the ride.

The ride was pretty uneventful but the sights that we got to see were amazing, there were areas where there was fog over the lake and rivers but not as dense on the highway. Once we started to climb the Ghat the wind chill factor reduced but the cold slightly increased hence negating it. Ghats are a totally different entity when done on a motorcycle. The bum started to get numb and the right side lower thigh muscle started to ache as that leg was not rested because of the continued usage of rear brakes (thanks to the infamous Erratic Indian traffic). Took one small break for a couple of minutes on the ghat to let it rest and then completed the journey to the hotel.

The breakfast was good although slightly on the expensive side, considering it was a special deal done by the dealership for the ride. While starting back there was a big group which came in some company picnic or such and then we came to realise the level of awareness related to riding gears which is effectively nill, as we had a lot of people asking the same thing why are we all so dressed like that. There were a couple of picture requests as well which normally went to the owners of the biggest motorcycles over there.

After a brief photo session, we started back stopped on the way for a couple of boxes of farm fresh strawberries, the ride down the ghat was troublesome this time as there was heavy traffic on the ghat of both light and heavy 4 wheelers, took almost 1.5 times more time as climbing the ghat.

Post the ghat the exhaustion and the stiffness in muscles started to take over and we were stopping after every 20-25kms, especially the last 70-80kms we stopped 4 times as I was finding it difficult to concentrate on both the riding and the muscle pains.

This was more a solo ride for me rather than a group ride although we started and ended at the same place people were riding pretty much on their own, at their own pace, some of the riders going as fast as 130-140kmph. Me and wife were at around 90-100 the entire time as I didnt have the heart to tackle Indian roads on speeds more than that.

The Motorcycle performed exceptionally well, no hiccups nothing no matter what the speed, there were slight vibrations on the footpegs at 100-110, but apart from that nothing from the motorcycle, and for the first time my motorcycle returned a mileage of more than 20kmpl on this ride, went for more than 220kms without the low fuel sign, which normally lights up in around 170kms in my daily commute.

Gem of an Engine and Gearbox.

Some pics from the ride. Couldn’t get much time for photosession on the way so some from the venues and couple when we stopped for strawberries. The motorcycle had to be sent to the Service center this weekend due to a broken acc cable. The cable broke on its own during washing it seems. I got the motorcycle from the parking to the washing area after washing the acc was totally free. Thankfully I bought the HOG membership this year so the drop to the service center was free of charge on a crane based towing vehicle. Otherwise that would have costed around 1800 INR one side.
Photos are below. By the looks of it the cable snapped due to rusting, as I could see some rust at the breaking point. The cable and the installation charges were 3247INR, the motorcycle comes with 2 acc cables both push and pull. I also got the seat modified for longer rides costed me 2.5k but the seat is pretty hard for now, will see if it settles down in time or not otherwise will have to go for a newer one from one of the custom houses. Went for a Lunch ride with the wife on the Pumba last Saturday to Kolhapur. We were able to complete the Pune-Kolhapur-Pune stretch amidst heavy rains and horrible roads in a span of 12 hours which included couple of small breaks and a 2 hour long lunch break. the total distance covered was 493kms which brings the odo total to upwards of 12250kms.

After that ride couple of issues has risen in the motorcycle I am assuming because of the all the dirt the bike might have picked up from the road and/or may be because of degreasing of the bearings and other parts due to rain.

1. A squeaky sound which comes and goes as it pleases
2. some rubbing sound from one of the wheels
3. Handle bar sticking while trying to turn, i try to turn it doesnt go when I apply slight more pressure it goes.
4. Bike starter failing tos tart when in gear and clutch is pressed, i am assuming some wd40 might clear this.

Will be taking to a service center this weekend to get it sorted out.

Also planning to get a complete checkup and service done for the upcoming long ride.

Kolhapur, just for lunch? must have been one of a lunch? I remember the days when traveling to Kolhapur from Mumbai used to take 12 hours one way, sit in the bus at 9 at night reach Kolhapur 9 in the morning. Now these days people go to Kolhapur for lunch??? Yeah when you have a Harley why not?

By the way where did you go in Kolhapur for lunch? Raigad Dhaba? or hotel opal?
K

vikyjoshi said:
Kolhapur, just for lunch? must have been one of a lunch? I remember the days when traveling to Kolhapur from Mumbai used to take 12 hours one way, sit in the bus at 9 at night reach Kolhapur 9 in the morning. Now these days people go to Kolhapur for lunch??? Yeah when you have a Harley why not?

By the way where did you go in Kolhapur for lunch? Raigad Dhaba? or hotel opal?
Click to expand...
it was more of a practice ride for an upcoming long ride, so thought why not have lunch.
We checked out with the harley davidson dealership in Kolhapur and were directed to Dehaati resto. the lunch was simply amazing. infact we might go again once the roads are better as the roads between Pune and Kolhapur are horrible.
K

Small update on the issues mentioned earlier:
1. Squeaky sound is gone.
2. Rubbing sound is also gone.
3. Handle Bar sticking is diagnosed to steerng column bearing and wheel bearing, planning to get it changed.
4. Bike starter was just the switch issue, resolved after cleaning the neutral switch.