anyone from mumbai please cover this event!!!

An Audi R8 caught fire all of sudden during this event on Mumbai’s Bandra - Worli Sea Link. Here is a shot of the upsetting sight (Source: Twitter). 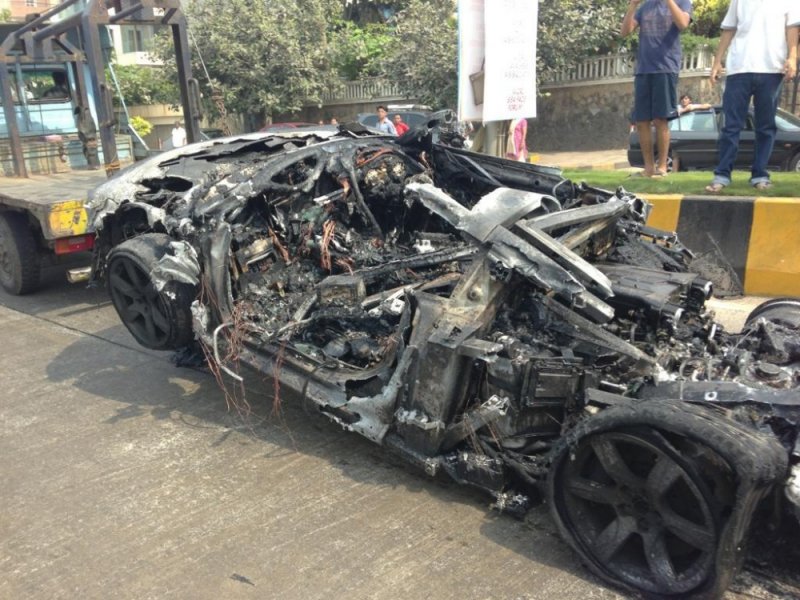 Ohh man that lambo engine is a fire-ey engine for sure. Is that the V8?

The recently introduced model of Audi, which also features in the latest Bollywood movie Race 2, costs around Rs1.80 crore and is among the premium products of the German car manufacturer available in India.

According to police and fire brigade, the cause of the fire was not clear and it was extinguished shortly after it started.

Though there were no casualties in the incident, the northern land side of the sea link was jammed for nearly two hours before traffic was permitted to cross the bridge.

Audi India head Michael Perschke told media-persons that preliminary investigations revealed that some modifications may have been carried out in the vehicle, but an investigation would reveal more details.

The incident happened during the prestigious two-day Fifth Mumbai Parx Supercar Show 2013 in which over a hundred of the most expensive cars used by top Mumbaikars took part.

Among the participating cars were the country's only Lamborghini Aventador Roadster, costing nearly Rs5 crore, and Ferrari 458GT.

It was not immediately clear whether the destroyed Audi R8 was also taking part in the car show at the time of the incident.

350Z said:
An Audi R8 caught fire all of sudden during this event on Mumbai’s Bandra - Worli Sea Link. Here is a shot of the upsetting sight (Source: Twitter).

I read it somewhere that the fire was because of the modifications made to the car which included NOS. Don't know how true it this though.

singh890 said:
Sad to see such a beautiful machine turned into ashes.

I read it somewhere that the fire was because of the modifications made to the car which included NOS. Don't know how true it this though.
Click to expand...
That's what AUDI is claiming as an assumption. But this could be just to save their reputation. In Depth analysis of the root cause is still pending and I know what it is going to be. Same as they claimed earlier.
T

why would someone put NOS in their R8? totally nonsense.

He brought it to the show for show purpose. I dont think it was driven in the convoy around the city. GS himself was in the twin turbo UG Gallardo which he has and it makes 1500 BHP. His wife took the honors for driving the 458 Italia around.
You must log in or register to reply here.
Share: Facebook Twitter Google+ Reddit Pinterest Tumblr WhatsApp Email Link
Top Bottom