It looks cool than the present model, i hope the new platform will bring an very good success for the next generation Skoda Fabia.

Wow Really looks stunning..But the Question is will this model be launched in India? [thinking]

Next generation Skoda Fabia to be longer and costlier

In 2016, both the VW group compact cars would sit on the shorter version of the MQB Platform that launched on the new Audi A3 and more recently on the Golf. However the Fabia, being the elder brother, would arrive first in 2015.

The Fabia like all other latest Skoda products gets the Vision D Concept inspired design. Wearing a wide grille, squared headlight detailing and LED infused combination lamp, one would also expect to see the trademark C-Shape light work.

Another trademark feature of the Fabia’s design, the chunky and upswept C-pillar would stay on. As with the current model, Skoda would offer contrasting colours on the mirror housings, hub caps and roof.

Auto Express observes that there’s a growth in the wheelbase of the car. It is marginally longer than the current Polo and Fabia for improving rear seat comfort.

Sometime in 2015, the 2016 Skoda Fabia hits European showrooms, costing slightly more than what it does now with an estimated starting price of £9,945 (8.58 lakhs).

Rendering – Next gen Skoda Fabia to get bigger and lighter

The Skoda Fabia may have lost its relevance in India but the hatchback holds much significance in the Czech automaker’s global portfolio.

The second generation Fabia was launched in 2007 which means this year is effectively the last in the car’s life. The third generation model would be born in 2014 to carry the nameplate forward.

The 2015 Skoda Fabia created by German auto website Autozeitung.de. The design approach of the rendering is very much in line with Skoda’s current design theme.

The logo gets pushed on to the bonnet. The grill and headlamps are comprised of straight lines, acknowledging the design principles formed by the Skoda VisionD concept. The central ridge on the bonnet, a signature Skoda touch, has not been missed by the rendering artist.

The new Fabia is likely to resemble the current car in profile but everything else would change. The upswept kink on the rear door to form a triangular rear quarter window panel is akin to the new Octavia, something similar to BMW’s Hofmeister kink. The rear is expected to feature uncluttered and understated elements.

The next gen Skoda Fabia will be longer and wider than the outgoing car. It will also be significantly lighter thanks to the MQB platform, which will also support the next gen VW Polo expected in 2016.

Existing powertrain options would be retained albeit with improvements. Rumor has it that the 1.0 litre petrol engine that powers the Skoda Citigo and VW Up! will be an entry-level motor.

2015 Skoda Fabia to get bigger and lighter [Rendering]

All-new Skoda Fabia to be unveiled in 2014

The next generation Fabia which will be based on Skoda’s new VisionD design philosophy. Set for an unveiling in the last quarter of 2014, the Fabia will be manufactured on new shorter version of the Golf’s MQB platform. Though positioned alongside the Polo, the Fabia will be the first small car from the VW group to implement the new platform which will eventually be inherited by the VW Polo, the SEAT Ibiza and Audi A1.

The new Fabia will feature aggressive styling, with a wider front grille, angular headlights and LED tail-lamps. The upswept C-pillar from the current model is expected to be carried forward to the new generation while also offering contrasting colours for the roof, wheels and door mirror caps.

The car is longer than the current Polo implying improved legroom and boot space in the rear. Skoda has not revealed information of the various engines that are on offer, but in all likelihood, the 1.2-litre petrol and diesel mills that currently power the Fabia and the Polo are expected to make their way to the new model.

In India, the Skoda Fabia never managed to make an impression mainly due to high ownership cost compared to the Maruti Suzuki Swift and the Hyundai i20. But things might be a lot different when the new model comes to India, as by then Skoda will start manufacturing engine / transmission in India significantly brining down overall cost.

All-new Skoda Fabia to be unveiled in 2014 - CarWale News

The Question is will this model come to India?

These car makers have a tendency to showcase brilliant cars in European markets but when it comes to India you tend to get a totally different car eg European Rapid is way better in terms of looks and design as compared to Indian one.

Skoda Fabia Could Be Re-Launched In India By 2015

Skoda will be launching a new Fabia hatchback for international markets during the latter part of 2014. This will be dubbed as their 2015 Fabia model. We have a strong feeling that the Czech manufacturer could offer this model in India.
The 2015 Fabia is expected to share the Volkswagen MQB platform which is currently used for the VW Polo as well as Seat Ibiza. Don't expect this car soon, but it could very well make its way into the subcontinent by mid 2015.

Skoda will definitely update the styling of the Fabia to its current design style. We expect the Czech manufacturer to redesign the front grille. They will also work on the headlamps and could introduce LED Daytime Running Lights as an option.
Click to expand...
Read full article at Skoda Fabia Could Be Re-Launched In India By 2015 - Drivespark

Here are the very first pictures of the ALL NEW FABIA - to debut in the last quarter of 2014. Fabia was seen testing in Germany. 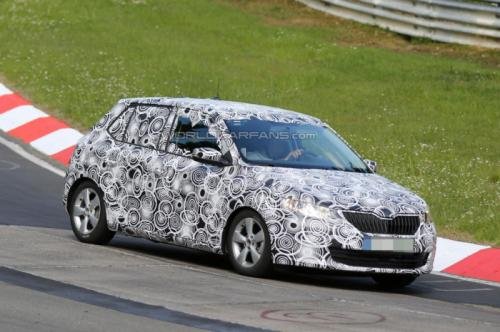 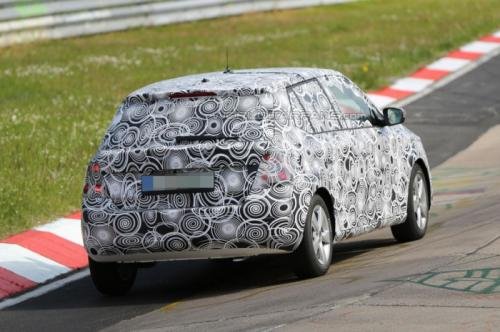 Starting with a prominent front grille, simple, straight lines create an understated and clean look for the Central European car. The 5-door will not look out of place next to a Rapid or an Octavia, but it has its own look going on.
Instead of going for an all-new platform, Skoda has re-engineered the old PQ24 (A0 family), thus keeping development costs down.

Prototype appears to have 15-inch wheels with continental tires, disk brakes all-round and a very small rear spoiler. Round the back, the exhaust isn't even showing, just the tow ring and a sea of uniform, reasonably shaped plastic.
The biggest selling point of the Fabia will be its boot, which could reach 350 liters if they decide to dispense with the spare and mount the floor lower. Interior space could also be surprisingly good.
The engines are also already available on other models. 1-liter mills will replace the current 1.2-liter HTP units.Updates for the 1.2 TSI turbos will also be made, with start-stop tech and potentially even energy recovery used to reduce fuel consumption. The only diesel option is likely to be a 1.4-liter three-cylinder that VW Group has designed to replace both 1.2 TDI and 1.6 TDIs.2-liter HTP units.
Click to expand...
All-New 2014 Skoda Fabia: First Photos of Third-Generation Model
Last edited: May 21, 2014

PetrolHeadPrash said:
From the pictures it looks very similar to the rapid spaceback launched in Europe
Click to expand...
Yes very much and the Autocar review too says so

Although under heavy disguise, a large, wide front grille similar to that used on the Rapid Spaceback can be seen at the front, while large tail-light clusters can be seen at the rear. The Fabia's boot also appears to use a small lip spoiler.
Click to expand...
New Skoda Fabia spotted testing ahead of 2015 launch | Autocar

Thanks For pointing out

my reactions were based on seeing the Pics had not read the article ;)
Last edited: May 21, 2014
V

The new Fabia will get company's latest logo, simple but fresh posture and edges across its profiles. The 1.2L TDI mill of current Fabia is said to be replaced by a new 1.5L TDI engine that will produce 89bhp of peak power; this is the new engine that will be coming in the updated VW Polo. Moreover, the petrol line-up might be powered by the 1.2L TSI motor from VW GT TSI. In addition, the new Fabia is speculated to get two transmission options - Dual-Clutch DSG AT Box and a Five speed manual transmission option.

As the pictures reveal, the new Fabia is similar in length to today’s 4m-long model, but it adopts a longer wheelbase and a small increase in width which is set to improve cabin space and load capacity. 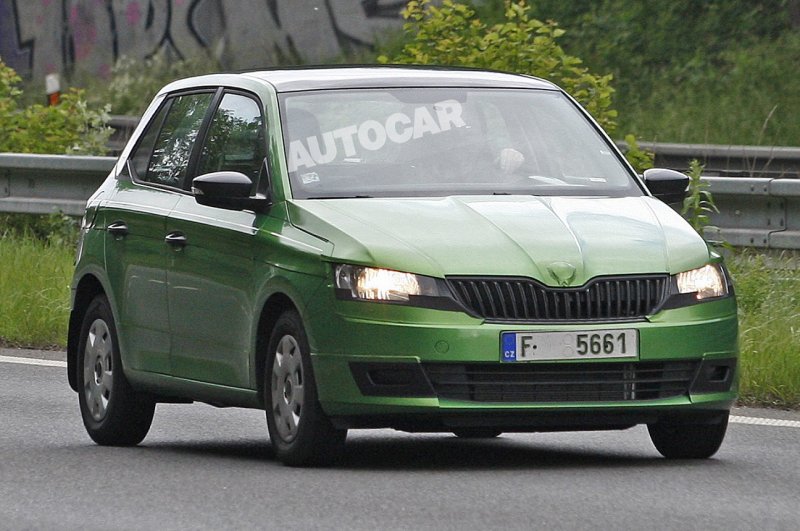 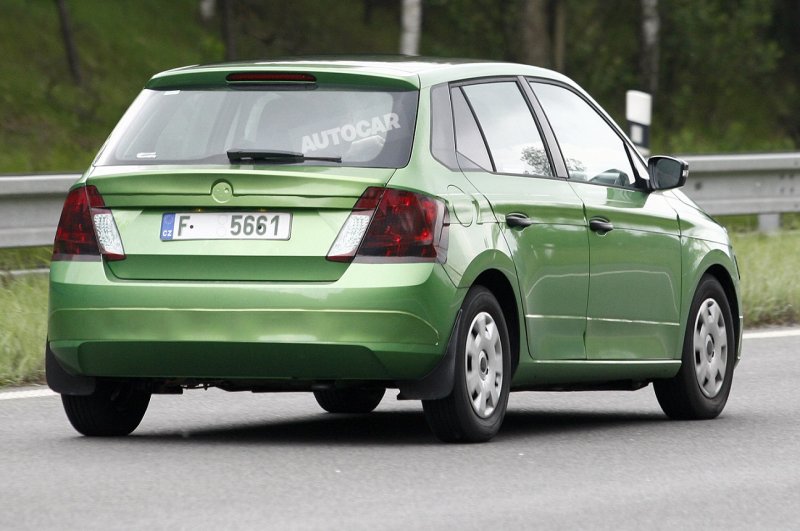 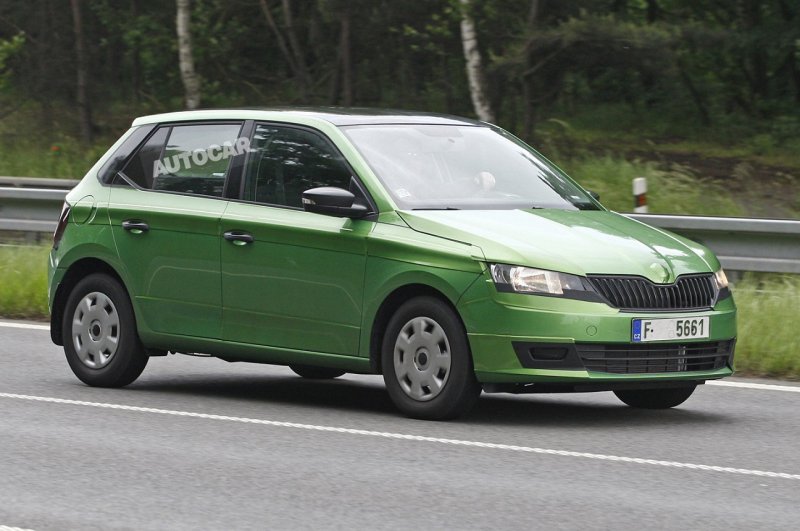 Skoda’s new supermini will sit on a heavily re-engineered version of the platform used by the current car, rather than adopt the shortened version of the Volkswagen Group’s MQB platform, known as MQB-A, which is being prepared for the next generation of the VW Polo. The similarities in basic shape between the old and new models can be seen in this test mule.
Click to expand...
The current platform is being kept and updated for a number of reasons. It will keep the Fabia as the VW Group’s entry-level supermini. It also will ensure economy of scale, because the modified structure is already being used beneath the Skoda Rapid and Seat Toledo models and it has just been extensively updated for the facelifted Polo.
Click to expand...
New Skoda Fabia laid bare ahead of Paris reveal | Autocar
Last edited: May 29, 2014