hey back headroom appears to be on lower side like that of Linea.

Here are some clear pics of the undisguised Verna(RB) sourced from ACI.

Nice pic and good post. Thanks for sharing with us.

This can only change the fate of Verna in India! Looking good in pictures , though front resembles the new gen i10 a lot!

Much speculation has happened over the launch dates and engine options of the Verna RB in India. The highly anticipated C+ segment car, which will give direct competition to the likes of the Suzuki SX4, VW Vento and Honda City will apparently come with 4 engine options, 2 petrol mills and 2 diesel powerplants. The launch of the car will take place most likely in the first week of April.
The petrol engines will comprise of a basic 1.4-litre mill with peak power of 106bhp and peak torque of 135Nm. The top end petrol will be a 1.6-litre Gamma unit good for a class leading 122bhp of power (overshadowing the SX4, Vento and the City) and 156Nm of peak torque. Both engines are also expected to be very fuel efficient for their class.
Diesel options will be offered in the form of a 1.4-litre CRDi engine, same as the one currently available on the Hyundai i20, producing 90PS of power and 224Nm of torque. This is a practical engine with sufficient power for Indian usage patterns and very fuel efficient too, at the same time. Sitting on top of the variant hierarchy of the Verna RB series will be 1.6-litre CRDi diesel with an impressive 126bhp of lip smacking power and 265Nm of yummy torque. All variants will come with an option of manual and automatic transmissions.

Those engine options are the most comprehensive of all the models offered in the segment currently. The new Verna RB is one of the latest cars rolling out of a resolute Hyundai’s plants and its benefits from their technological prowess which has been overshadowing rivals across the world. Like all new Hyundai cars, the Verna RB is also expected to ride and handle much better than its predecessors and create a new standard to be followed by the class competitors.
The C+ segment has already hotted up immensely with the launch of the SX4 diesel, which is witnessing record bookings. The Vento has caught up with the sales of the Honda City which is reeling under the newly mounted pressure from its rivals.The launch of the Verna RB would be no less than a nightmare for Honda which has witnessed negative growth in times when other companies are having a ball.
Expect a price tag ranging from Rs. 7 to 9.5 lakh rupees for the base petrol and the top and diesel.
Click to expand...
Source: Motoroids

ARAI has released the fuel efficiency figures for the 2011 Verna RB which are are as follows:

I read a TD report of this car recently in Hindu. Engine performance is good , rear legroom has been increased a bit , comfort levels have slightly increased but the car just like all Hyundai's handles poorly at high speeds!

After Ford unveiled the new Fiesta, Hyundai seems to have hastily started the bookings for the new Verna RB.

Here is the ad in today's TOI:

Hyundai has quietly launched the teaser website as well:

Knightrider, Thanks for the fantastic scoop! Now let me also add that the car is releasing on May 11, 2011 along with following features. Posting the image of advertisement here directly for the convenience of others. 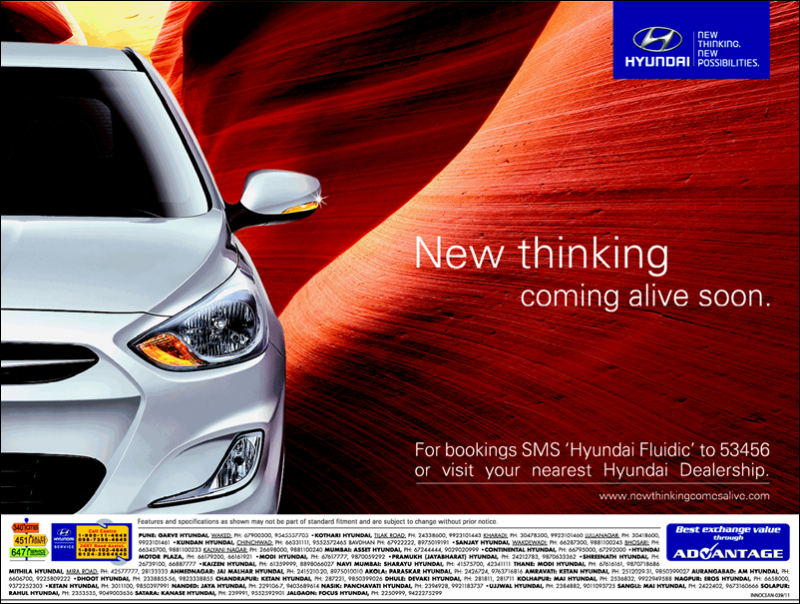 350Z said:
Knightrider, Thanks for the fantastic scoop! Now let me also add that the car is releasing on May 11, 2011 along with following features. Posting the image of advertisement here directly for the convenience of others.

Drive Safe,
350Z
Click to expand...
Wow, that's a good news. So finally Verna RB will be launched before the Fiesta. The features look good too.

@350Z: Any scoop regarding the price range?

Knightrider said:
@350Z: Any scoop regarding the price range?
Click to expand...
Not yet, but watch this space.

6 airbags is a huge improvement for Verna , remember the current Verna transform doesn not have a single airbag even in the top-end model! Parking camera and Bluetooth are new additions.


I don understand what is this cluster ionizer and supervision cluster!
A

Re: New Hyundai Verna RB; Launch on 11th May

Though I do not think that 6 airbags would make it here.
The current verna does not have even a single.

On second thoughts, i20 has 6 airbags, so hyundai just might take the initiative.