∂נℓυν said:
wow, amby remake, wud be interesting to see if Govt. uses new model.
Click to expand...
I am sure they would love to use it. I read somewhere that govt had ordered for around 1000 Ambys to ferry CGW officials and participants! its a BIG number and shows govt will be really keen .. but this would be clear only when it hits the roads.... :)

Raj Malhotra said:
I am sure they would love to use it. I read somewhere that govt had ordered for around 1000 Ambys to ferry CGW officials and participants! its a BIG number and shows govt will be really keen .. but this would be clear only when it hits the roads.... :)
Click to expand...
I think Amby is still BS-3 and Tata Motors is already an official transport partner for CWG 2010. Anyways, Interesting to know about Ambassador’s come back. It has been a legendary model of country and will always remain to. I can only end saying that is the car for Indians, and by the Indians.

The competitors have gone mile in front of HM.They still research to change the indicator lights, grills etc.,
HM guys need to work seriously to give a new model (Other than Amby). Ambassador also need to modified to compete with the latest machineries.

Well they could do something like this in their new facelift? 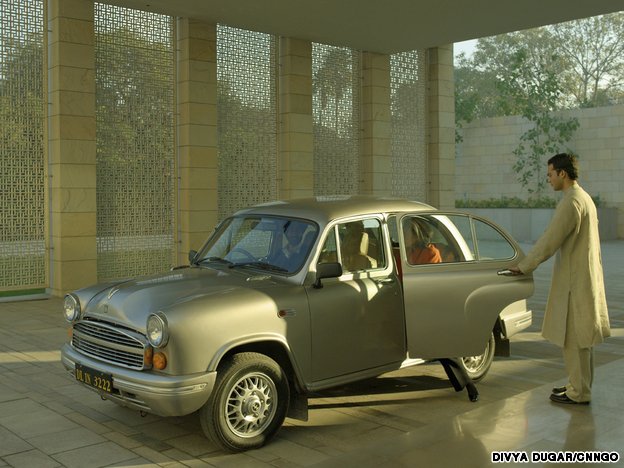 I am very much interested in HM climbing the ladders very soon. I will be one of the happiest person if they lauch something more different in Ambassador and some other new models like modified Contessa etc.,

I dont know what is stopping HM designers to look into the new ones and there were many ideas given from the Amby Loving people.

Hindustan Motors may launch a smaller variant of the Ambassador sedan by the end of the year. According to report from the Hindu Business Line, the new vehicle is being developed in house and will be based on the Ambassador platform.

The Kolkata based automaker is believed to positioning the car in a segment where the excise duty is substantially lower that what is charged on the current Ambassador. We believe that this will most likely be the rapidly expanding sub-four metre sedan segment.

Uttam Bose, MD of Hindustan Motors confirmed that the company will launch a new variant as well as a new model of which the latter is expected to hit the market by March 2014 and is believed to be targeted at a much younger buyer group.

HM, the country's first automobile manufacturer has been going through a very tough times. When the other carmakers are selling their vehicles in bulk, HM fell behind, unable to cope up with the competition. Now, in the middle of very bad market, the homegrown auto-major aims to revive its lost glory.

To raise the sales of its signature product, the iconic Ambassador, the company is planning to launch a smaller variant of the car by December 2013. The firm wants to make most of the benefits from the lower excise duty on smaller cars, and plan to position the car in a segment to enjoy substantially lower excise duty than the established rate on the current range of Ambassador vehicles. Sources said that the prototype of this car is ready and would use the Ambassador platform. The car would be smaller in size, the company might strip the boot and will make it a mid-segment car.

HM Managing Director Uttam Bose said that the variant of the Ambassador would be ready by the third quarter of next fiscal, and would be in the market by March 2014. However, he declined to reveal much information on the vehicle. The new Ambassador now avails an excise duty that lies between 24 per cent and 27 per cent. The company aims is to positioned this vehicle such that it would come within the 12 per cent excise duty bracket. The company is trying hard to price new variant of Ambassador around Rs. 4 lakh.

The current Amby's sales figures are actually quite impressive for a car that old.
A new Amby with refreshed looks and interiors with a base price of Rs. 4 lakhs
can be a tempting offer for many a buyer.

With most of the HM dealers closed down, how are they gonna manage the new product?

If they come up with a competitive product, they are likely to
get a bunch of more dealers than what they have right now.
S

As far as Amby is concerned its an iconic car in India. HM should do more R & D for new models as they have an alliance with Mitsubishi. But for heaven sake, HM should reduce the price for Ambassador. Many people said that Indica has replaced Amby. It may be true, but there are several factors which made Indica to go ahead. Primarily its because of the cost of new car. A new Ambassador and Indica cant be compared with rate wise.

But all other goes positive towards Amby. Space, Comfort etc. Even today a person travels in an Amby wont like other cars as if offers superior comfort at an affordable cost. HM can make wonders if they are ready to cut the prices of Amby for all variants. Personally my vote goes for Ambassador anyday. Its hard to see new Ambys nowadays. HM, please keep Amby alive till this world exists.
You must log in or register to reply here.
Share: Facebook Twitter Google+ Reddit Pinterest Tumblr WhatsApp Email Link
Top Bottom