J.Ravi said:
The only change I observed was the humming noise at idling.
Click to expand...
Maybe they just need to change the vacuum modulator,instead of the whole turbocharger.

mayankdixit said:
Maybe they just need to change the vacuum modulator,instead of the whole turbocharger.
Click to expand...
That's the word i was looking for, Vacuum Modulators when i mentioned in the TUV 3OO issues and problems.
Thanks Doc for your Gyan.
This is probably the failed part in Blue D.

Today, Blue Diamond has come back home after a week after the fourth paid service with a new turbocharger replaced under warranty. Now, the humming noise at idling is gone. The Concorde guys test-drove B Diamond extensively after the replacement of turbocharger to confirm everything is alright. The SA showed me the photographs of new turbocharger being fitted. When asked if it was a common problem in Nexon, he replied that mine was the first one with the turbo problem that he dealt with. I paid ₹ 963 for the fourth paid service. 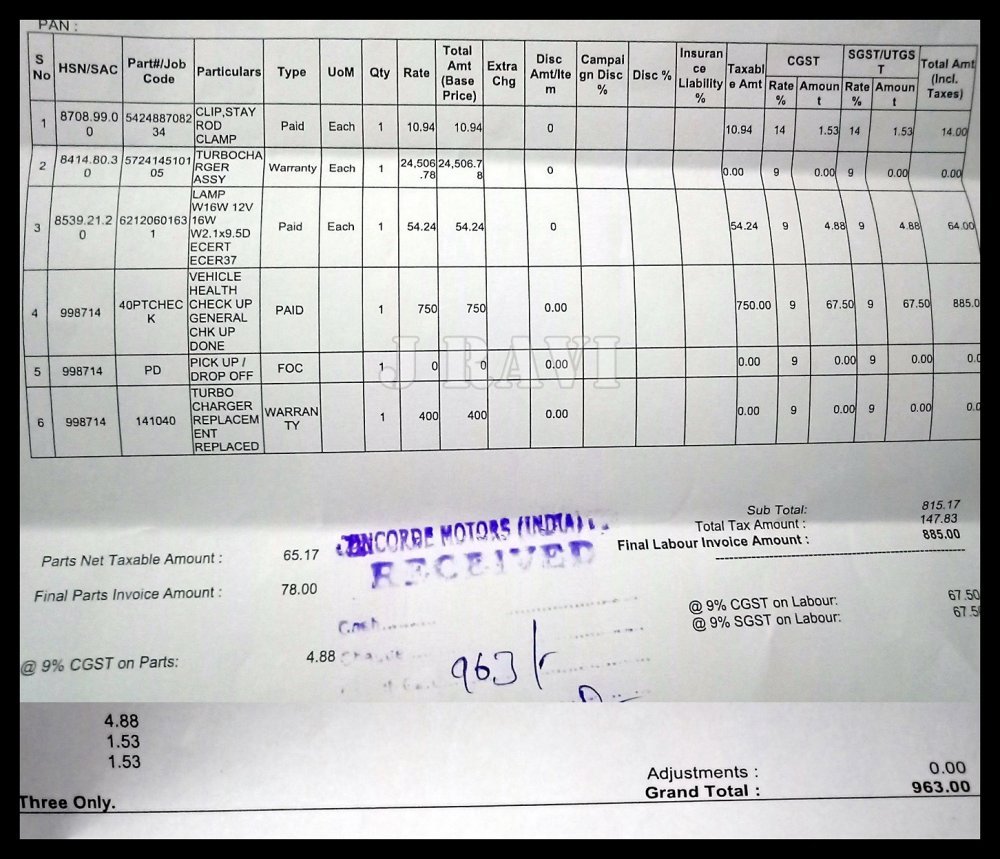 mayankdixit said:
How did it happen?
What went wrong?In such a new car.
Can it be avoided next time?
Click to expand...
The SA was totally clueless. Thanks to Concorde and Tata Motors for replacing the turbocharger assembly proactively. In fact, I asked the SA to explore the possibility of lubricating the parts instead of dismantling and fitting a new one as I did not want to meddle with the factory-fitting. But he was insisting on complete replacement as it is their policy for Nexon, 'not to repair but to replace during warranty period'! He confessed that if the car is out of warranty, he would have suggested repair instead of replacement as per their standard procedure to reduce the cost to the customer.

I guess we will never know ,so again All's well that ends well.
Click to expand...
Yes. Finally that counts.

An ordeal comes to an end, seems a one off case.
All the best Sir.

Recently, I bought Amazon Basics extension cable having male and female ends, so that I need not struggle while changing connection from Google Maps from the phone to the USB drive for listening to the songs. Now, I can connect or disconnect and change from Google Maps to songs or vice versa easily. Now, I can have navigation from NaviMaps on my phone and listen to my favourite songs from the USB drive simultaneously. Here are some pics of the new Garrett-branded turbocharger, replaced by Concorde-Tata Motors under warranty. The SA was hesitant for sharing the photographs clicked by him at the time of installation. So, I clicked some for posting here. mayankdixit said:
I think it's Garrett brand.
Click to expand...
Yes, it is. Thanks, doc.

Nanofreak said:
An ordeal comes to an end, seems a one off case. All the best Sir.
Click to expand...
Thank you so much, Vinod.

A positive takeaway from TML's quick response is, they are ready to bend backwards to solve PV car's issues asap.
My 2 cents on my TATA car's ownership since 3+/1+ years experience.

And in addition, I have seen TAMO dealers also improving, much, much better than those days. I was having the problem of Dashcam fitted on my car which they did something couple of times but the problem not fully solved. It wok for a couple of days after the repair and goes off again (they said lose connection of power cable, which they changed once but actually it was the problem due to damaged AV-in hole which resulted in lose / display interruption

Last week when I gave the car for fixing the touchscreen, I have asked them to do something better for the Dashcam problem and surprisingly they have replaced the cam itself and fitted a new one without charging any money (even though the warranty period for the cam is already completed 2 months back).

Good job TAMO and the Dealer.

Nanofreak said:
My 2 cents on my TATA car's ownership since 3+/1+ years experience.
Click to expand...
Even I had very good experience with the same Concorde, Mysore Road, Bangalore during my Linea ownership years of 2009-13.

Nairrk said:
And in addition, I have seen TAMO dealers also improving, much, much better than those days.
Click to expand...
Yes, agreed.

Blue Di took us to Chennai Royapettah home safely and comfortably. Left Bangalore Basaveswara Nagar at 4:05 am today and reached Chennai Royapettah home at 10:45 am. We breakfasted at Sangeeta, Poonamallee for about an hour. Showers accompanied us from Vaniambadi to Sriperumbudur at varying degrees. Had a free passage at Electronic City as their scanner did not detect Blue Di's FASTag and the attendant manually lowered the boom to make way for Blue Di! 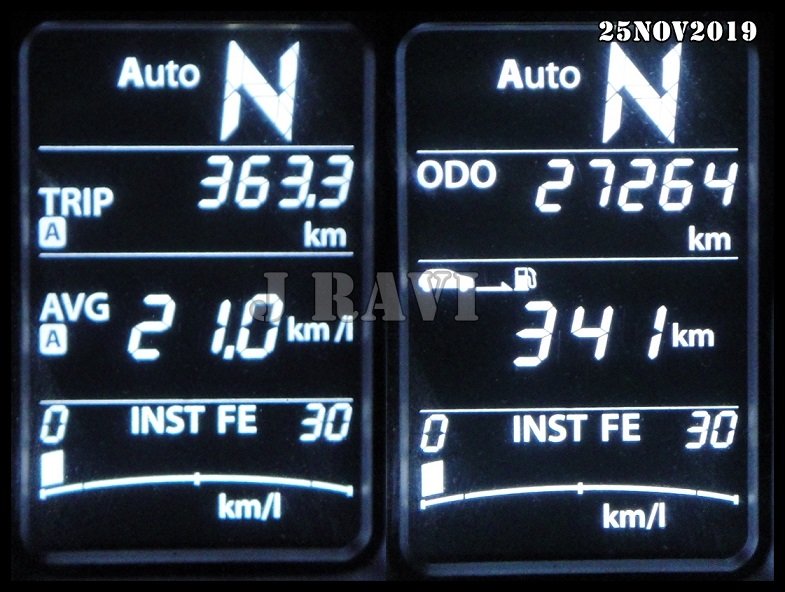 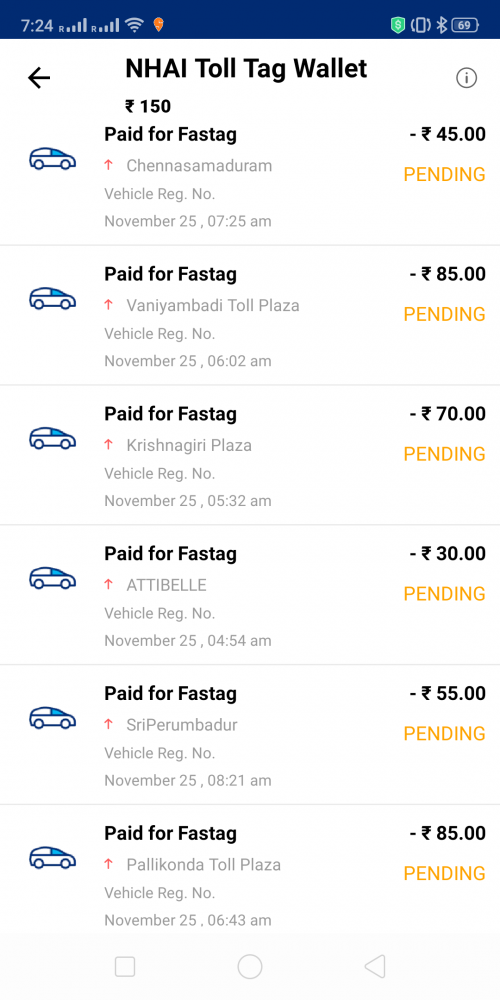 Did Chennai>Bangalore drive in 9½ hours in busy hours of today. Phew! Exited Chennai home at 10:45 am and reached Bangalore home at 8:04 pm, including lunch break at saisangeet, Walajah toll and coffee break at A2B, Hosur. It's a record-breaking of all my Chennai<>Bangalore drives from time immemorial. I took a vow today to revert to my time-tested night driving hence forth. I saw a big crowd of car owners to buy FASTag at Pallikonda and Krishnagiri toll plazas at special camps. I have started using HUD bought a few years ago for my erstwhile XUV 500, which was lying unused after the departure of XUV 500. I dusted it off, found the OBD port and connected it. Voila! Now, I can see the digital display of speed, rpm and battery voltage on the windshield. Speed as well as as rpm,you already have in your instrument cluster.Only battery voltage is the additional required bit of information.
Why are the display pictures not clear?

mayankdixit said:
Speed as well as as rpm,you already have in your instrument cluster.
Click to expand...
But, I don't have to divert my attention to look at the odometer/tachometer, while driving. It is always available on the windshield on real-time basis in front of the driver. Plus, the digital display is better than the analogue view. Human mind quickly grasps the numbers displayed.

Why are the display pictures not clear?
Click to expand...
The double images are due to the laminated windshield. 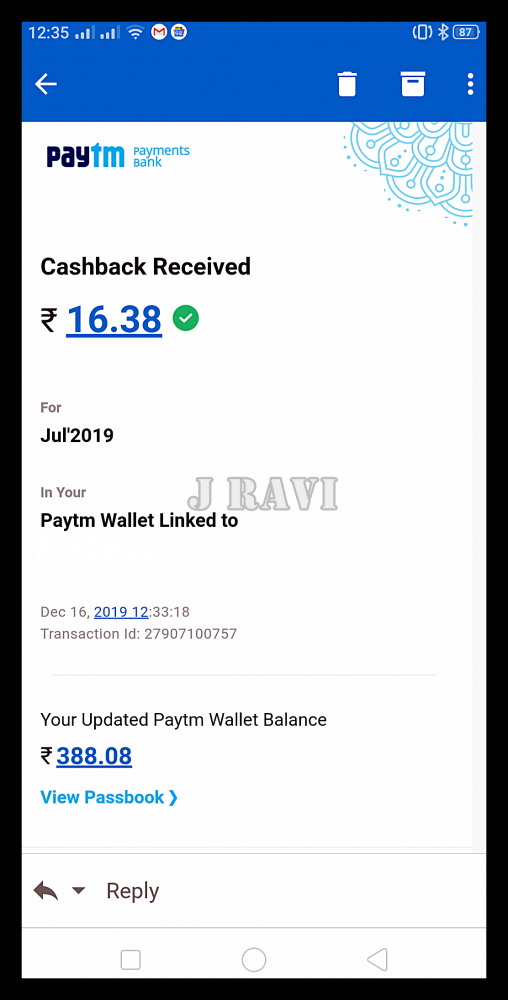 From the past one month, I have been observing loss of a few psi pressure in the front left tyre. Today, I checked the tyre pressures. All the three tyres recorded 32 psi. The front left recorded 27 psi, indicating a loss of 5 psi/month. So, inflated the tyre and took it to the nearby puncture repair shop. He checked and found no punctures. Then, I told him to check the wall tube pin. He checked and found that it was worn out at the tip. So, he replaced it with a new one and inflated the tyre. Paid ₹ 50 and returned home. Now, I have to continue to monitor it for a few weeks.
You must log in or register to reply here.